The exact pro-oxidant and antioxidant status in alcoholic liver disease among the chronic alcoholics is still not clear. Alcoholic liver disease (ALD) & its complications are still one of the most frequent causes of death in both developing and developed counties. The present study was conducted to add a new insight to the question, whether ethanol induces oxidative stress, change in the level of antioxidant vitamins ascorbic acid & vitamins E (non- enzymatic antioxidant parameters), trace elements Zinc & Selenium & activities of antioxidant enzymes superoxide dismutase (SOD), glutathione peroxidase (GPx) & catalase in erythrocytes. Study was performed in 40 patients with alcoholic liver disease (study subject) & compared to 40 age & sex matched healthy subject (controls). It was observed that they was a significant increase in MDA (Malondialdehyde), SOD, GPx and significant decrease in ascorbic acid, vitamin E, zinc, selenium & catalase activity in patients with alcoholic liver disease when compared to controls. The results of our study have shown higher free radical production, as evidenced by the increased MDA & decreased levels of ascorbic acid, vitamin E, selenium & catalase activity, supporting the hypothesis that they is increased oxidative stress in patients with ALD. The increased activities of antioxidant enzymes may be a compensatory regulatory response to increased oxidative stress. The decreased antioxidative status support the hypothesis that lipid peroxidation is an important causative factor in the pathogenesis of ALD. These data clearly indicates that, antioxidant mechanisms might be impaired in these patients. These findings also provide a therotical basis for the development of novel therapeutic strategies such as antioxidant supplementation.

Alcoholic liver disease (ALD) is the disease considered to be a major cause of morbidity & mortality, with increasing incidence day by day especially in the developing countries including India [1]. Alcohol intake remains the most important cause of cirrhoses in the Western World [2]. Excessive consumption of alcohol (ethanol) by large section of the population is still an important medical & social problem in many countries of the world. It leads to various physical, mental & psychological changes. Chronic consumption of alcohol causes accumulation of fat in liver [3]. The ingested alcohol in chronic alcoholics also alters various metabolic pathways inside the liver, which ultimately leads to the production of reactive oxygen species (ROS) [4]. Free radicals are formed in both physiological & pathological conditions in mammalian tissues [5]. Influence of free radicals & presence of oxidative damage that is alteration in the oxidant- antioxidant profile is known to occur in chronic alcoholism [6]. Antioxidants are compounds that dispose, scavenge & suppress the formation of free radicals, or oppose their actions [7]. They exist in both the aqueous and membrane compartment of cells & can be enzymes or non-enzymes.

In our previous study we showed that lipid peroxidation was significantly increased along with significant decrease in antioxidant vitamin levels in patients with alcoholic liver disease [8]. However we have not studied trace elements especially zinc, selenium and antioxidant enzymes especially glutathione peroxidase. Another reason for selecting this study is that many research groups in the past have tried to study & confirm oxidative stress induced by alcohol. These studies included mainly animal experiments and very few human studies. To throw more light on these aspects we have undertaken this study and decided to measure the level of antioxidant vitamins, trace elements and enzymes along with MDA and compared with controls.

Present study was carried in the department of Biochemistry, Govt Medical College, Miraj and Sinhgad dental college and hospital, Pune. The study group comprised of 40 male patients of alcoholic liver disease, having history of alcohol intake of 80-100 gms / day continuously for more than 10 years. 40 normal age matched healthy male volunteers served as controls. Written consents were taken from the patients prior to the study. Patients were subjected to detailed clinical examination and laboratory investigations. Severely ill patients with terminal stage, cases with multi organ involvement & those suffering from hepatitis / cirrhosis / jaundice not related to alcohol were excluded from the present study. Patients with age below 35 and above 60 years were also excluded from the study. Controls and Patients were divided into 2 groups.

b) Serum ascorbic acid and vitamin E by Ayekyaw [10] and Baker [11] method respectively.

e) The activity of Glutathione peroxidase (Gpx, EC 1.11.1.9) was measured as described by Paglia & Valentine in erythrocytes [15].

All reagents used were of analytical reagent grade & were obtained from sigma chemicals, st Louis, MO.

Ethical approval of institutional ethical committee was obtained before doing the present study.

Statistical analysis between group I (Controls) & group II (Study subjects) was performed by the student’s t- test using SPSS package for windows. The data were expressed as mean ± SD. P < 0.01 was considered as significant.

The results of research parameters in patients and healthy subjects are presented in 3 tables. 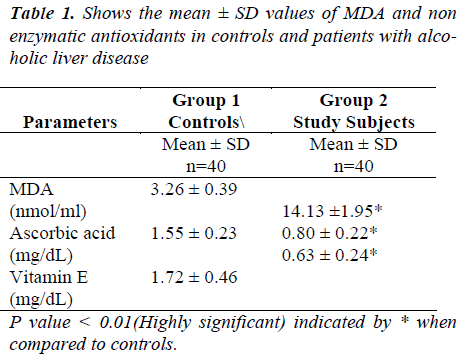 Table 1: Shows the mean ± SD values of MDA and non enzymatic antioxidants in controls and patients with alcoholic liver disease 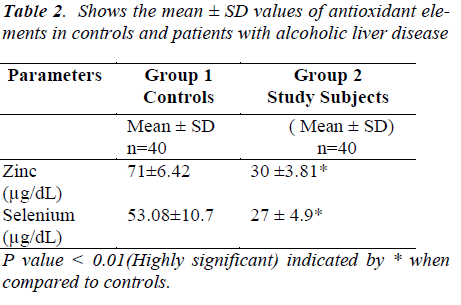 The mean ± SD of erythrocyte SOD, GPx, and catalase are indicated in Table 3. There was statistically significant increase in the erythrocyte antioxidant enzymes SOD (10.50 ±1.28), GPx (43.62 ± 1.36) activity in patients with alcoholic liver disease as compared to controls. The level of erythrocyte catalase activity was significantly decreased (3.15 ± 0.35) in group II (Study subjects) when compared to group I (Controls). 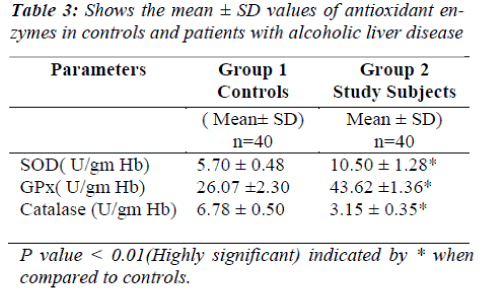 In our study we have showed that, there was significant increase in lipid peroxidation and significant decrease in the level of antioxidant vitamins and trace elements. Further we have also showed the increased activity of antioxidant enzymes except catalase in patients with alcoholic liver disease compared to controls.

Alcohol consumption is associated with a number of changes in cell functions and the oxidnt-antioxidant system. Acute and chronic ethanol treatment has been shown to increase the production of reactive oxygen species, lower cellular antioxidant levels & enhance oxidative stress in many tissues especially the liver [16]. Many pathways have been suggested as playing a key role in how ethanol induces oxidative stress. Lipid peroxidation mediated by free radicals is considered to be a primary mechanism of cell membrane destruction. & cell damage [17]. Glutathione (GSH) plays a role in cellular protection against oxidative damage. Chronic alcoholics showed depletion of GSH levels (0.95 ±0.14). Several factors contribute to this fall; most important of which is oxidative stress, which has occurred in our study. Depletion of GSH renders the cells more susceptible to oxidative stress.

We observed a significant decrease in antioxidant vitamins in alcoholic patients. Free radical generation can induce oxidative stress. The decrease in the level of these vitamins may be due to the increased turnover, for preventing oxidative damage in these patients suggesting an increased defense against oxidative damage in alcoholic liver disease. Previous studies also supported our findings [3.18]. These results indicate that in ALD patients the efficiency of the antioxidant vitamins in counteracting the damaging effects of free radicals is significantly reduced. Thus the result of our present study suggests that cumulative functional insufficiency of the antioxidant vitamin system may play an essential role in the development of oxidative stress in patients with ALD.

In our study we found decreased level of serum zinc and selenium in ALD patients when compared to controls. Other research workers also support our findings [19, 20]. Both inadequate dietary intake of these elements and alcohol induced changes in hepatic structure and function may have contributed to the decrease of these trace elements in the subjects studied. Further it is possible that decreased antioxidant trace elements in combination with reported glutathione depletion, makes the hepatocytes more vulnerable towards the toxicity of ethanol.

In our study, the erythrocyte antioxidant enzymes i.e. Superoxide dismutase (SOD) & Glutathione peroxidase (GPx) activities have been increased significantly in ALD patients. Many authors have come across equivocal or controversial results regarding activities of these enzymes in alcoholics. Both increased and decreased SOD activities in the blood of alcoholics have been reported [21, 22, and 23]. The increase in erythrocyte SOD activity may probable be an adaptive response towards oxidative stress. Our finding regarding SOD activity is supported by the work of DM Vasudevan and Subirkumar Das (24). They found an increase in erythrocyte SOD activity. The probable reason of increase in SOD activity in our study may be that, in alcohol induced oxidative stress; there may be up regulation of enzyme activity towards oxidative stress. Over expression of SOD activity may result in increased dismutation of superoxide to H2O2. Evidence is accumulating that intermediates of oxygen reduction may in fact be associated with the development of alcoholic liver disease. GPx is an oxidative stress inducible enzyme, which plays a significant role in the peroxyl scavenging mechanism & in maintaining functional integrity of cell membranes [25]. The rise in the activity of GPx could be due to its induction to counter the effect of increased oxidative stress. GPx provides an effective protective mechanism against cytological injury, because it eliminates hydrogen peroxide and lipid peroxidation by reduction, utilizing reduced glutathione (GSH) [26].

Our study showed a significant decrease in the activity of erythrocyte catalase in alcoholics. Catalase is the enzyme, which protects the cells from the accumulation of hydrogen peroxide by dismutating it to form water and oxygen or by using it as an oxidant in which it works as a peroxidase [27]. The decrease of enzyme could be due to increase in malondialdehyde which can cross link with amino group of enzyme protein to form intra and intercellular cross-links thereby inactivating several enzymes including catalase [28].

In conclusion, oxidative stress may be involved in chronic alcoholics. The present study clearly demonstrates the higher oxygen free radical production as evidenced by increased levels of MDA and decreased levels of ascorbic acid, vitamin E and catalase activity, supporting the hypothesis that there is increased oxidative stress in patients with alcoholic liver disease. The increased activities of antioxidant enzymes may be a compensatory mechanism in response to increased oxidative stress. The decreased concentration of antioxidant vitamin status support the hypothesis that lipid peroxidation is an important causative factor in the pathogenesis of alcoholic liver disease among chronic alcoholics. These data clearly indicates that antioxidant defense mechanism might be impaired in these patients. These findings also provide a theoretical basis for the development of novel therapeutic strategies such as antioxidant vitamin supplementation. However due to limited number of cases in our study, future study should be planned with more number of cases to substantiate the more results and arrive at a definite conclusion to throw more light on oxidative stress & antioxidative status in patients with ALD.