Objective: KIAA1199 has been identified as an oncogene in many cancers. Here we collected tissues of 153 of Non-Small Cell Lung Cancer (NSCLC) cases to investigate the relationships between KIAA1199 protein and clinical factors.

Methods: Immunohistochemistry (IHC) staining was used to detect the expression of KIAA1199. Follow-up was carried out every 3 months for the first 2 y and at 6-month intervals thereafter during the follow-up period (3 y), which include included blood analysis, chest X-ray, ultrasound examination, computed tomography. Kaplan-Meier survival analysis and Cox analysis were applied to identify the relationship between KIAA1199 and NSCLC.

Conclusion: Our findings revealed that KIAA1199 protein could be applied in predicting NSCLC patient’s outcome.

Lung cancer is one of the most lethal human malignancies in the world. The number of new lung cancers is estimated to be 221,200 and estimated death exceed 60 percent in 2015 based on the data during 1995 through 2011 [1]. Non-Small Cell Lung Cancer (NSCLC) accounts for more than 80% of all lung cancers [2].

In the past few decades, the five-year survival rate after diagnosis of NSCLC is found less than 15% and conventional treatments are not effective enough to improve the prognosis of the disease [3]. The molecular carcinogenesis of NSCLC remains unclear and is widely accepted to be caused by multiple alterations of gene expression, which cause abnormal changes in signaling pathways and biological behaviour. Therefore, there is a need to identify novel molecules for diagnostic and therapy of NSCLC.

KIAA1199 is mainly expressed in cochlear tissues and the mutated form of KIAA1199 might be associated with the nonsyndromic hearing loss [4]. Up regulation of KIAA1199 gene expression will inhibit cellular mortality and the repression of the gene may attenuate wnt-signaling pathway in colon cancer cells [5,6].

Besides, the high expression of KIAA1199 plays an important role in tumor progression in Colorectal Cancer (CRC) [7]. Induction of this protein in colon cancer cells will cause a poor prognosis [8].

Several studies have also been performed in gastric cancer and breast cancer and conclusions were similar [9,10]. However, currently, the relationship between KIAA1199 and NSCLC is still unclear.

In the present study, we compared KIAA1199 expression between NSCLC tissues and normal lung tissues and analyzed the clinical pathological and prognostic significance of KIAA1199 in NSCLC patients.

Our aim was to confirm whether the expression of KIAA1199 can be used to predict the prognosis of NSCLC.

A total of 153 cases of tumor specimens were collected from patients who underwent biopsy or surgical resection and were diagnosed as lung adenocarcinoma or squamous cell carcinoma in our hospital from January 2008 to December 2013. Meanwhile, 45 normal lung tissues were taken as normal control. The pathological staging was performed based on the International Staging System [11]. The informed consent was obtained from all patients and the study was approved by the ethics committee of Nanfang Hospital, Southern Medical University.

Formalin-fixed, paraffin-embedded 153 NSCLC and 45 normal tissues were used for the IHC studies. Briefly, the tissue was sliced continuously into about 4 μm sections and the slides were de-paraffinized and rehydrated. After blocked with 3% hydrogen peroxide in methanol, non-specific binding was blocked with goat serum. Anti-KIAA1199 antibody (1:20, Atlas) was added and incubated overnight at 4°C. The sections were then incubated with biotin-labelled secondary antibodies for 30 min at room temperature and HRP-labeled streptavidin was added. All slides were analyzed and calculated by two independent pathologists. The statistical method of final IHC score followed previous studies [12,13].

Blood analysis, chest X-ray, ultrasound examination, and computed tomography were undertaken during follow-up periods. Each patient was scheduled for an examination every 3 months for the first 2 y and at 6-month intervals thereafter during the follow-up period (3 y).

All statistical analysis was performed by SPSS 19.0 software (SPSS, Inc., Chicago, IL, USA).The chi-squared test was used to examine the association between KIAA1199 protein expression and patients’ clinicopathologic factors. The comparison of survival time was showed by Kaplan–Meier curves, and statistical differences were compared with a logrank test. The prognostic value was determined by multivariate Cox regression analysis. P<0.05 was considered to be statistical significance.

In order to understand the clinical features of patients, detailed data of the patients, such as gender, age, differentiation degree, TNM stage, were collected from the medical records, which were summarized in supplementary data 1. Of the 153 patients in this study, 119 (77.78 %) were men and 34 (22.22 %) were women, ranging in age from 20 to 82 y. 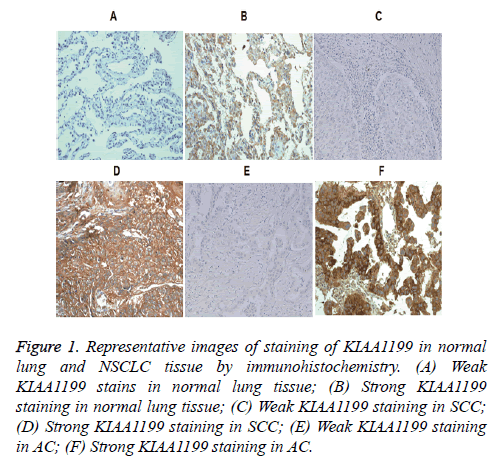 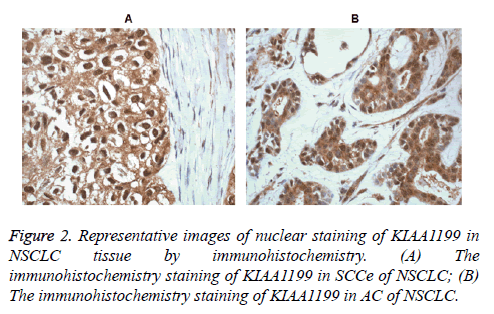 To investigate the effect of KIAA1199 protein on NSCLC prognosis, survival analysis on these 153 patients was performed. Firstly, the association between clinicopathologic factors and patients’ outcomes was analyzed. The related data were presented in Table 3 and it was shown that poor histopathologic differentiation, positive lymph node metastasis and high TNM stage were associated with a significantly worse Overall Survival (OS). Then, we analyzed the prognostic significance of KIAA1199 protein. Kaplan-Meier analysis of OS showed patients with KIAA1199 protein overexpression (P=0.004) had a poor 3 y survival rate (Figure 3). 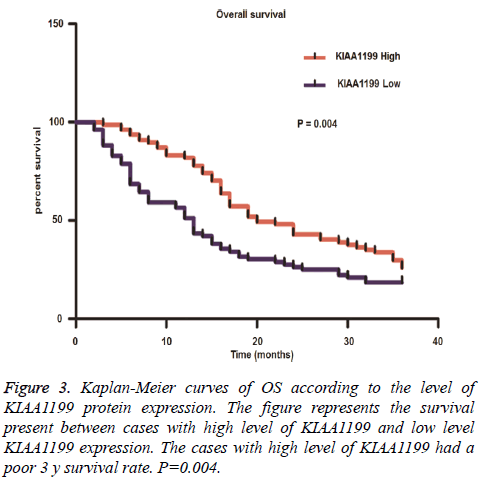 NSCLC is characterized by the presence of a highly malignant tumor and a poor prognosis and short term survival. Numerous studies and clinical trials have tried to elucidate the factors that influence tumor progression, but few advances have been made in the past 15 y. Genetic abnormalities have been taken into account in the recurrence and early metastasis of NSCLC [14]. Therefore, it is important to explore new prognostic markers to predict patients for unfavourable prognosis.

KIAA1199 is a glycosylated protein, located in the cytoplasm and membrane, especially the endoplasmic reticulum [5,15,16]. Many studies have focused on the relationship between cancer and KIAA1199. In breast tumor, KIAA1199 can regulate cell growth and invasion and could be a novel therapeutic target [9]. The similar analysis reported that KIAA1199 overexpression predicts poor survival in patients with colon cancer [7]. KIAA1199 protein can promote tumor progression by several mechanisms. Other studies have shown that the KIAA1199 protein expression level was elevated upon p53 activation [10]. The expression of KIAA1199 was also induced in hypoxia and was regulated by Jarid1A, resulting in cell migration [16]. Furthermore, the activation of NF-κB pathway could induce KIAA1199, and then transmit pro-survival and invasive signals [17]. KIAA1199 was also associated with angiogenesis in rheumatoid arthritis [18]. However, little is known about the mechanism of KIAA1199 tumor-promoting effects in NSCLC.

In conclusion, our results revealed significant associations of KIAA1199 protein expression with various clinicopathologic characteristics and prognostic of NSCLC patients. Moreover, survival analysis showed that KIAA1199 was an independent prognostic factor for overall survival in NSCLC. All of these findings indicated that KIAA1199 protein might be used as a pathological marker to identify individuals with poor outcomes and to provide a reference for clinical therapy in the future.

This study was funded by Medical and Health Research Projects of Yichang (A14301-30).