One-year evaluation of the performance of the Trulign toric intraocular lens implanted in eyes using intraoperative aberrometry to determine sphere, cylinder and position.

Objective: To evaluate the performance of the Trulign toric intraocular lens (IOL) positioned with intraoperative aberrometry in eyes with one year of follow-up.

Participants: All patients implanted with a Trulign toric IOL between June 2013 and September 2014.

Patients have developed high expectations for their visual acuity (VA) after cataract surgery. In response, surgeons have become adept at the biometric measures and calculations necessary to reduce spherical refractive error after intraocular lens (IOL) implantation. Even so, a large cohort study found that emmetropia was achieved in only about half the surgical cases. A major factor contributing to this postoperative refractive surprise was residual corneal astigmatism [1].

Preoperative keratometric stigmatism >1.0 diopter (D) occurs in one-third and >1.5 D in 6%-18% of eyes undergoing cataract surgery [2-4]. Astigmatism has a subjective blurring effect similar to spherical defocus of the same magnitude [5]. Even 1.0 D of astigmatic error can compromise reading vision and the ability to drive at night [6]. The presence of uncorrected astigmatism also negatively affects quality of life [7].

The pivotal trial of the Trulign toric IOL reported that the IOL achieved all efficacy endpoints at 6 months postoperative [10]. To our knowledge, there are no published studies of this IOL with >6 months follow-up. The purpose of this retrospective study was to assess astigmatic and VA outcomes after 1 year in eyes implanted with the Trulign toric IOL in a routine clinical setting.

The current research project meets the conditions for exemption from Institutional Review Board (IRB) review (Western Institutional Review Board, Puyallup, WA, USA). Data were entered into the AnalyzOR, the ORA System’ s secure database. Patient identifiers were masked before data analysis. All eyes were implanted by a single surgeon (PDGS) with the Trulign toric IOL. This is a consecutive series of the first eyes implanted by PDGS with the Trulign toric IOL over a 16-month period (approximately 100 eyes).

The Trulign toric IOL is a silicone modified plate IOL with polyimide haptics. The optic has a 5 mm diameter with an overall lens diameter of 11.5 mm. Axis markings are on the anterior, aspheric surface of the lens and toric correction is on the posterior surface. Three lenses are available in the BL1UT (cylinder power) toric series based on cylinder power at the IOL plane: BL1UT125 (1.25 D), BLT1UT200 (2.00 D) or BL1UT275 (2.75 D).

Standard microincision phacoemulsification (Stellaris system, Bausch+Lomb, Rochester, NY, USA) was performed through a 1.8 mm incision. A 5.25 mm circular capsulorhexis, created with a femtosecond laser, (Lensar Inc, Orlando, FL) allowed free movement of the IOL optic. A capsular tension ring was inserted in all eyes. After phacoemulsification of the crystalline lens, the capsule was polished, the phaco incision extended to 2.8 mm and the toric IOL inserted and aligned. Viscoelastic was removed and the IOL checked to ensure alignment.

During surgery, intraoperative aberrometry (ORA System, Alcon Labs Inc, Fort Worth, TX) was used to verify the lens choice. Patients were targeted for a postoperative spherical equivalent of plano in the dominant eye and -0.5 D in the nondominant eye. 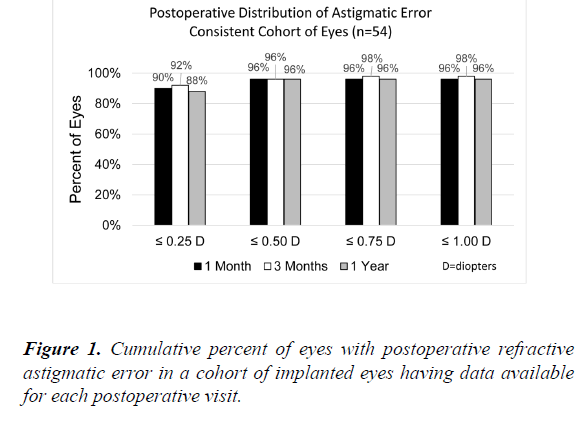 Figure 1: Cumulative percent of eyes with postoperative refractive astigmatic error in a cohort of implanted eyes having data available for each postoperative visit.

Table 4. Cumulative distribution of visual acuity at distance, intermediate and near at final visit.

None of the implanted IOLs had to be realigned postoperatively due to rotation. All eyes had CDVA of 20/20 or better and UDVA of 20/40 or better 1 year postoperative. There were no complications or adverse events in this series of cases.

This study assessed outcomes for RRA and VA in eyes implanted with the Trulign toric IOL. Over 90% of implanted eyes achieved an RRA within ± 0.25 D from the 1 month to the 1 year visits. Study eyes also consistently achieved good, functional uncorrected visual acuity at distance, intermediate and near through the 1 year postoperative visit.

The levels of RRA were very low. Residual refractive astigmatism was ≤ 0.25 D in almost all eyes (92%) at 1 month and was maintained through the final 1 year visit (94%). Consistency was demonstrated by the almost identical percentages of eyes with RRA ≤ 0.5 D and ≤ 1.0 D at 1, 3 and 12 months postoperative in the consistent cohort of 54 eyes. A 1 month study of eyes implanted with the Trulign toric IOL (n=40 eyes), in which intraoperative aberrometry was used, reported similar results. Postoperative astigmatism was ≤ 0.50 D in 97.5% of eyes and ≤ 1.0 D in 100% of eyes [11]. In the Trulign toric IOL pivotal clinical trial (n=138), 78.4% of eyes were within ± 0.5 D and 95.5% were within ± 1.0 D of predicted postoperative refractive astigmatism at the final visit of 4-6 months. In this randomized, controlled trial, postoperative residual refractive astigmatism was significantly lower compared to eyes implanted with the Crystalens IOL; a lens similar to the Trulign toric IOL but lacking the toric surface [10].

Strengths of the current trial are the extended follow-up of 1 year and the assessment of RRA and VA, the two most important outcomes to patients, in a ‘ real world ’ clinical practice. A limitation is the retrospective nature of the study. Precise measurement of IOL rotation is not part of the standard follow-up visit in this practice. However, the consistency of both RRA and VA measures suggest that the IOL is stable up to 1 year postoperative. This is in line with the pivotal clinical trial, in which Trulign IOL rotation usually occurred early after surgery. At 4-6 months 96.1% of IOLs had rotated<5° [10]. In addition, all eyes in this study were implanted with a capsular tension ring to improve stability [18].

The Trulign toric IOL, implanted with power and placement guidance provided by intraoperative aberrometry, provided good visual acuity outcomes at distance, intermediate, and near with minimal residual refractive astigmatism. The results were stable over postoperative year 1.

This study was supported by an independent grant from Bausch+Lomb, Inc.