Purpose: This study aims to discuss and explore the influences of microRNA-93 on the cell proliferation of cervical cancer and its regulation mechanism.

Cervical cancer is one of the most common malignant tumors seen in females, ranking 2nd in female malignant tumors, and has severely threatened the life and health of female patients [1]. Early cervical cancer often shows no apparent symptoms, and is therefore difficult to diagnose; unfortunately, middle or late cervical cancer has a low curative ratio [2]. Hence, finding highly sensitive and specific diagnostic markers for early cervical cancer and its effective therapy plan is an urgent research task [3]. MicroRNAs are non-coding single-stranded small RNAs (~20 nt in length) that inhibit the expression of a target gene by binding to the target RNA 3’UTR. In addition, microRNAs participate in the genesis and progression of tumors and play an important role in tumor cell proliferation, apoptosis, and migration [4]. In tumor genesis, microRNAs play a role that is similar to that of an oncogene or an antioncogene. The present study aimed to discuss the molecular mechanism of microRNA-93 as it regulates the proliferation of cervical cancer cells, and further provide theoretical basis for the clinical treatment and prevention of cervical cancer.

The expression vector pEGFP-C1 was from Clontech, US; Taq DNA polymerase HindIII, restriction endonuclease BamHI, and AMV reverse transcriptase, among others, came from Takara Company; homologous recombination enzyme EZfusion was from Shanghai General Company; DH5α competence cells were from Beijing TransGen Biotech; lipofection reagent Lipofectamine® 3000 was from US Invitrogen; DMEM culture media, Fetal Bovine Serum (FBS), and trypsin came from Gibco; CCK-8 kit was from Shanghai Beyotime Biotechnology; clean bench and CO2 incubator came from Thermo Fisher; flow cytometer FACSCalibur came from the US BD Company; and the qRT-PCR instrument was from the ABI Company.

Construction of the expression vector

The location of microRNA-93 in the genome was specified through miRBase. The base sequence of mature microRNA-93 and its flank were obtained using the public database Ensembl. The corresponding primer was designed for the 150 bp fragment extended towards the upstream and downstream of mature microRNA-93 (Table 1). Taq DNA polymerase was used to obtain the corresponding PRC products. The purified target PCR bands were collected by gel extraction kit. The expression vector pEGFP-C was linearized through double digestion by HindIII and BamH. The purified PCR fragment was connected into the linearized vector pEGFP-C1 through EZfusion. After subsequent transformation and identification, the expression vector of microRNA-93 was constructed.

HeLa cells were cultured in DMEM media containing 10% FBS, and then placed in an incubator with 5% CO2 and 95% air at 37°C. MicroRNA-93 was overexpressed heterologously in HeLa cells by lipofection. By following the transfection procedures for Lipofectamine® 3000, pEGFP-C1 (Vector) and pEGFP-C1-microRNA-93 (miRNA) were transfected into HeLa cells, after which the cells were cultured in an incubator containing 5% CO2 and 95% air at 37°C for two days. Then, the expression of green fluorescent protein was observed using fluorescence microscope. Next, HeLa cells were collected, and RNA was extracted and reversed. Finally, the expression of microRNA-93 in HeLa cells was detected by qRT-PCR.

HeLa cells were collected centrifugally, and the RNAs were extracted by Trizol method. The extracted RNAs were quantified and then reversely transcripted to be cDNAs by AMV reverse-transcription enzyme. cDNAs were used as templates for qRT-PCR detection. The microRNA-93-specific primer for qRT-PCR detection was produced by Sangon Biotech (Table 1). The PCR reaction system consisted of the following: 2X SYBR mix; 5 and 0.2 μL for upstream and downstream primers (10 μM), respectively; and template cDNA 25 ng. The system was filled to 10 μL using sterilized water. The reaction conditions were 95°C for 1 min, and then denaturation at 95°C for 15 s, followed by annealing at 60°C for 15 s and extension at 72°C for 30 s for a total of 40 cycles. The fluorescence signals were collected once per cycle. Using the expression of U6 as reference, the relative expression of microRNA-93 was relatively quantified through the expression of 2-ΔΔt pairs of genes.

HeLa cells transfected with vector and miRNA were separately cultured in 96-well plates, each containing 2000 cells. Each group of HeLa cells seeded in 10 wells and cultured at 37°C for 48 h. To five wells of each group, 10 μL of CCK-8 liquid was added for 2 h. Then, the ELISA instrument was used to detect absorbance at 450 nm. The relevant absorbance value between the miRNA group and the vector group was calculated by subtracting the detected value for the group with no added CCK-8 from that of the group with CCK-8.

HeLa cells transfected with vectors and miRNA were separately collected by centrifugal method, fixed by 75% ethanol, and then stained by PI. The cell cycle was analysed using a flow cytometer.

The Hela cells transfected with vector and miRNAs were separately collected by centrifugal method, to which RIPA lysis buffer was added. The mixture was placed on ice for 0.5 h, after which 2X loading buffer was added. After lysis, cells were treated with 10% SDS-PAGE gel electrophoresis and transformed to another membrane for 100 min at 200 mA constant current; these were then closed in 5% skimmed milk at room temperature for 1 h, after which EGFR, AKT or p- EGFR, and p-AKT primary antibody dilution were added. This was then incubated at 4°C for one night, washed by TBS thrice (5 min per wash), and the corresponding secondary antibody dilution was added. Next, it was incubated at room temperature for 1 h and then washed by TBS thrice (5 min per wash). Finally, HRP-chromogenic reagent was used to show the Western blot results. All the antibodies used in this test were purchased from American CST Company.

To identify the role of microRNA-93 in the cervical cancer HeLa cell line, EZfusion homologous recombination enzyme was used to construct the overexpression vector of microRNA-93. First, HeLa cells were transfected with pEGFPC1 (vector) and pEGFP-C1-microRNA-93 (miRNA) with lipofection method, cultured for 2 days, and then observed under a microscope. Most cells expressed GFT, indicating that the expression vectors were transfected into HeLa cells at high levels. After collecting the two groups, the microRNA-93 expressions in these two groups were measured by qRT-PRC, the results of which were compared with those of the vector group. The expression of microRNA-93 in the miRNA group obviously increased (p<0.01) by 65.5 ± 2.5 times that of the vector group (n=5, p<0.01) (Figure 1).

Figure 2: Influence of the heterologous overexpression of MicroRNA-93 on HeLa cell proliferation.

Hela cells transfected with vector and miRNA were cultured for 48 h, and apotosis was detected using Annexin V and PX markers. Based on the flow cytometer results, the cell apoptosis in the vector group (Annexin V+PI+) was 5.85% ± 1.21%, whereas that in the miRNA group with heterologously overexpressed microRNA-93 was 23.56% ± 3.53%. Therefore, the apoptosis of the miRNA group significantly increased compared with that of the vector group (n=3, p<0.01, Figure 3). 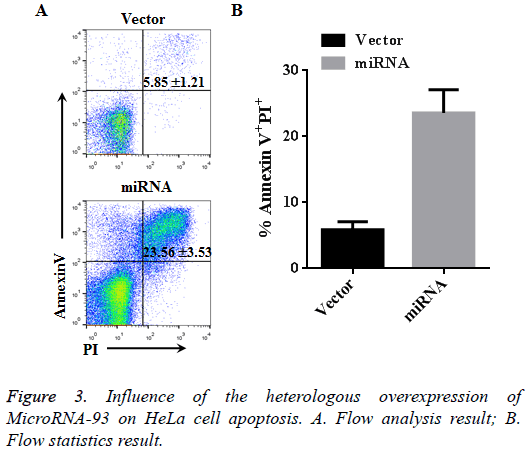 Figure 3: Influence of the heterologous overexpression of MicroRNA-93 on HeLa cell apoptosis. A. Flow analysis result; B. Flow statistics result.

HeLa cells transfected with vector and miRNA were cultured for 48 h, after which the cell cycle of each group was detected by PI staining. The flow results showed that, compared with the vector group, most cells in the miRNA group with heterologously overexpressed microRNA-93 were arrested in G0/1 (79.5% ± 0.25%). The results are shown in Figure 4 (n=3, p<0.01).

Figure 4: Influence of the heterologous overexpression of MicroRNA-93 on HeLa cell cycle. A. Flow analysis result; B. Flow statistics result.

MicroRNA-93 suppresses the proliferation of cervical cancer cell by promoting apoptosis and G0/1 cell cycle arrest. To reveal the mechanism that allows microRNA-93 to inhibit cervical cancer cell proliferation, we collected protein samples from HeLa cells transfected with vector and miRNA, and then cultured these for 48 h. Western blot was made to measure the changes of p-EGFR and EGFR, as well as the p-AKT and AKT in the two groups. HeLa cells transfected with miRNA demonstrated the significant downregulation of p-EGFR and p- AKT, whereas no obvious changes in EGFR and AKT were observed (Figure 5). Hence, microRNA-93 inhibited the proliferation of HeLa cells by suppressing the EGFR/AKT signal pathway. 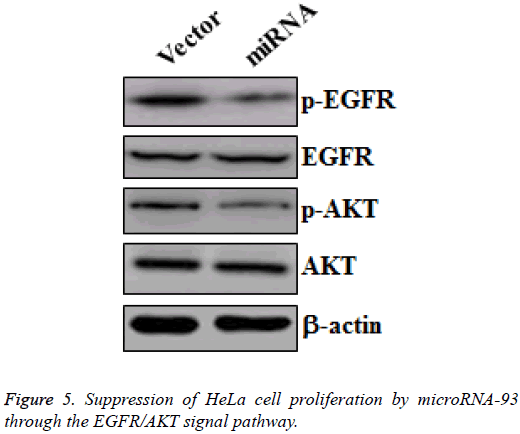 Figure 5: Suppression of HeLa cell proliferation by microRNA-93 through the EGFR/AKT signal pathway.