Metal levels in commercial pelagic fishes and their contribution to their exposure in Turkish people of the Black Sea.

Citation: Bat L, Arici E, Öztekin A. Metal levels in commercial pelagic fishes and their contribution to their exposure in Turkish people of the Black Sea. J Fish Res. 2017;1(1):1-4.

Heavy metals naturally occur in marine environment and may enter in biota including fish as a result of anthropogenic activities such as industrial; urbanization and agricultural processes. The metals in fish as food are being particular concern in relation to harmful effects on public health. Four commercially important pelagic fish Sarda sarda; Pomatomus saltatrix; Trachurus mediterraneus and Engraulis encrasicolus were captured in four of the most important fishing municipalities in the southern Black Sea coasts; to determine the levels of heavy metals in the muscle and to evaluate the possible risk associated with their consumption. Fish samples were collected during the fishing season between September and December in 2015 from Igneada; Sinop; Samsun; and Trabzon ports of the southern Black Sea. Metals were determined by using ICP-MS (Inductively Coupled Plasma – Mass Spectrometer). Concentrations in studied coasts gradually decreased from Igneada to Sinop; and then significantly increased at Samsun and Trabzon. According to the results; heavy metal concentrations in fish species tissues were well within the limits set by the FAO/WHO recommendations and showed that the fish from investigated region are safety for consumers.

Pollution is a global problem because toxicants such as metals result to bio-accumulation and bio-magnification issues in the food web [1]. Heavy metals come into contact with ocean waters through effluent discharge and leeching of terrestrial wastes which become wash load discharge in rivers [2]. Wash load effluents either retain themselves at the banks or move downstream into the oceans and become pollutants. Aquatic life residing at the river mouth has primary contact with wash loads after which are consumed by larger animals of the seas. Now, the movement of metals up the trophic levels results to accumulation problems if at all contaminated preys are consumed more than the metal depuration process [3].

Heavy metals are originated from a kind of natural and anthropogenic sources. Apart from natural sources, industrial, domestic, agricultural discharge, mine runoff and solid waste disposal areas and acid rains may greatly become the source of marine coasts pollution of heavy metals [4]. Nowadays the Black Sea ecosystem and fish stocks notably are subjected to the influence, both of the natural environmental factors and of increased anthropogenic activities.

Besides, urban and industrial wastes and sewage are discharged straight into the Black Sea without any kind of treatment [5-7].

Fish naturally live and feed in the aquatic environment. Heavy metals bio-accumulates in the food chains and cause toxic effects. It is well known that fish are sensitive to many toxicants and are a suitable organism for indication of marine ecosystem health [8]. Some metals especially non-essentials, e.g. mercury (Hg), cadmium (Cd), lead (Pb) and arsenic (As) are highly toxic and have no any biological role [9-11]. Not all heavy metals are particularly toxic, and some are essential such as copper (Cu), zinc (Zn) and iron (Fe) and have biological function [12] but are toxic when in a certain form [13] and its high concentrations [14].

The fish samples were taken randomly during the fishing season 1st of September and 31st December of 2015 from Igneada, Sinop, Samsun and Trabzon ports of the southern Black Sea and only consumed sizes were used (Figure 1). Fish samples were then labelled, preserved, and transported to the main laboratory. All the samples were stored at -21°C prior to pre-treatment and analysis. Heavy metal analysis (arsenic, copper, zinc, mercury, iron, cadmium and lead) in the edible tissues of fish samples have been performed by accredited Çevre Food Analysis Laboratory Environmental Industrial Analysis Industry and Trade Inc. using ICP-MS (Inductively Coupled Plasma – Mass Spectrometer) and application of m-AOAC 999.10 (AOAC: Association of Official Analytical Chemists; reference number TÜRKAK Test TS EN ISO IEC 17025 AB-0364-T) and CSN EN 15763 European Standard methods after microwave pressure digestion. 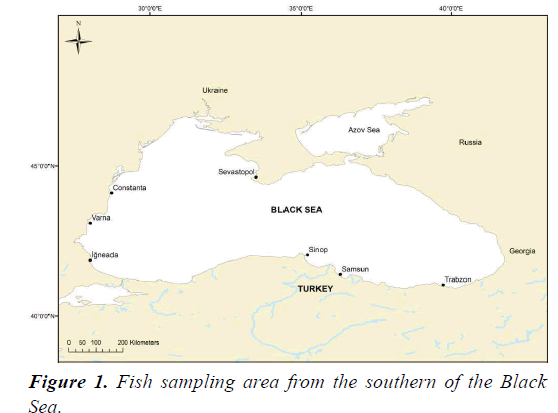 Figure 1. Fish sampling area from the southern of the Black Sea.

The average heavy metal weekly intake was calculated according to the following formula: 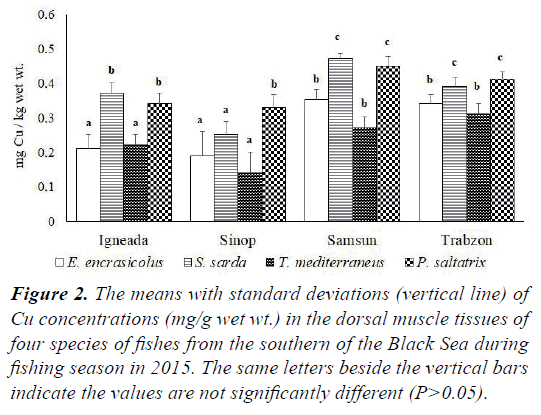 Figure 2. The means with standard deviations (vertical line) of Cu concentrations (mg/g wet wt.) in the dorsal muscle tissues of four species of fishes from the southern of the Black Sea during fishing season in 2015. The same letters beside the vertical bars indicate the values are not significantly different (P>0.05). 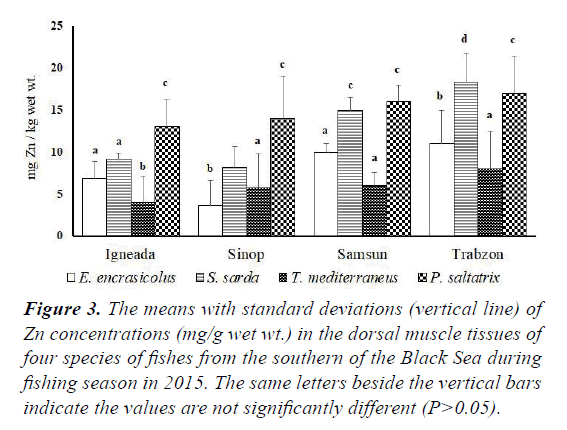 Figure 3.The means with standard deviations (vertical line) of Zn concentrations (mg/g wet wt.) in the dorsal muscle tissues of four species of fishes from the southern of the Black Sea during fishing season in 2015. The same letters beside the vertical bars indicate the values are not significantly different (P>0.05). 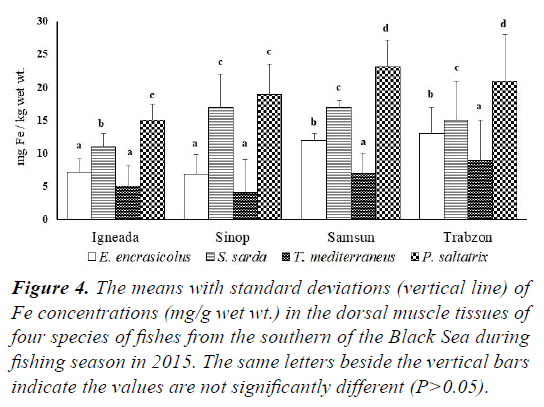 Figure 4.The means with standard deviations (vertical line) of Fe concentrations (mg/g wet wt.) in the dorsal muscle tissues of four species of fishes from the southern of the Black Sea during fishing season in 2015. The same letters beside the vertical bars indicate the values are not significantly different (P>0.05).

In the present study S. sarda and P. saltatrix accumulated more metals than those in both T. mediterraneus and E. encrasicolus from the southern of the Black Sea. Some fish may be contaminated with heavy metals especially Hg, Cd, As, Pb and Cu due to the pollution of the coastal waters. Large, long lived and predatory fish such as Atlantic bonito and bluefish are the other risky group. Therefore heavy metal concentrations of fish must be controlled strictly and more scientific researches should be done to develop a better understanding about potential risks of them.

The Black Sea is facing serious threats from pollution caused by industrial and domestic activities. In the last few decades, urbanization and industrialization has been created environmental pollution due to the intensive nature of human activities in the Black Sea [5,6,8,14]. Heavy metal contaminations in marine organisms especially fish are of great concern because of their persistence, nonbiodegradable and toxicity to consumer and other organisms via food chains. However, study on possible health risk due to the contamination hazardous elements in fish is extremely important.

In 2015, quantity of caught sea fish was 345.765 metric tonnes and 193.492 tons anchovy, 4.573 tons Atlantic bonito, 16.664 tons Mediterranean horse mackerel and 4.136 tons bluefish were caught from Turkish waters [16]. Fish having contaminants could present a toxic threat for the consumer which is dependent on the metal concentration and amount of fish consumed [8].

Therefore, the tolerable weekly intakes were estimated by means of references for edible tissues of fishes consumed by people. The annual quantity of fish consumed is 6.2 kg/person [16], which is approximately to 17 g/day for Turkey. The tolerable weekly intake of heavy metals as PTWI (Provisional Tolerable Weekly Intake), are set by the Food and Agriculture Organization/World Health Organization (FAO/WHO) Joint Expert Committee on Food Additives (JECFA) [17,18]. PTWI is the maximum amount of a contaminant to which a person can be exposed per week over a lifetime without an unacceptable risk of health effects. The estimated daily intake (EDI) and estimated weekly intake (EWI) in this study were calculated and presented in Table 1. Intake estimates were expressed as mg/kg body wt./daily and weekly.

Concentrations in studied coasts gradually decreased from Igneada to Sinop and then significantly increased at Samsun and Trabzon. The fluctuation in concentrations of metals at coasts is due to distance from the main rivers which close to the coasts Igneada, Samsun and Trabzon and far to the coast of Sinop. It seems that the ports of Samsun and Trabzon stand out as one of the areas of major ecological impact on the coastal environment. Very recently, Bat [8] reviewed the metal concentrations and their effects on marine biota in the Black Sea coast of Turkey. Bat [8] compiled heavy metal studies in 33 fish species over last two decades. The metal concentrations decrease in the order Zn>Fe>Cu>Mn>Pb>Ni>Co>Cd. In the present study metal contents in the Black Sea Atlantic bonito, bluefish, anchovy and Mediterranean horse mackerel were compared with the other studies. The results of the present study were similar or lower than those in edible tissues reported by other studies in the Turkish Black Sea coats [8]. In terms of metal pollutants load from Turkish coast of the Black Sea especially in Igneada, Trabzon, Bartin and Samsun were higher than other cities of Turkish coast of Black Sea [8].

The metals are also introduced by anthropogenic activities to the marine coasts and are also natural sources of metals released to the marine environment [19]. They can transport over long distances in the atmosphere and deposit in faraway areas, so that they are widely found in the marine environment [20]. The toxicological properties of heavy metals are different and therefore, their evaluation in nature is required. Heavy metals may great extent pollute marine environment and raise toxicological and carcinogenic concerns. The most grounded cancer-causing agents have been appeared to be non-essential metals such as Hg, Cd and Pb. Ingestion is the main routes of human exposure to the metals. The determination of heavy metal concentrations in marine environmental coasts, for example, fish are important to characterize the levels of environmental contamination and lastly to evaluate the danger of human health.

In the present study, arsenic, copper, zinc, mercury, iron, cadmium and lead concentrations in the dorsal muscle tissues of four species of fishes from the southern of the Black Sea during fishing season (September-December) in 2015 have been analysed. According to the results, heavy metal concentrations in fish species tissues were quite below the maximum values set by the EU and TFC recommendations and showed that the fish from investigated region are safety for consumers. It is suggested that these pelagic fish from the Black Sea of Turkey [21] did not pose any threat to consumer upon their consumption. It can be said that there is no metal accumulation risk if consumption of about 1-4 servings of these fish of the Black Sea per week.

This work was carried out at the University of Sinop, Fisheries Faculty, Department of Hydrobiology. This study was presented as poster in the 3rd International Symposium on EuroAsian Biodiversity (SEAB-2017), Belarusian State University, Faculty of Biology, 5-8 July 2017, Minsk, BELARUS.