Is the efficacy of Chinese herbal medicine on polycystic ovarian syndrome enhanced by acupuncture in rats?

Polycystic ovarian syndrome (PCOS) is one of the most frequent endocrine dysfunctions in women in fertile age [1, 2]. As the conclusion from the published studies concerning diagnostics and therapy of PCOS are incoherent, the clear definition of PCOS remains controversial among experts. According to a recent survey including 7,000 outpatient gynecologists [1], it still remains difficult for gynecologists to restrict themselves to the few definition criteria defined in the 2003 Rotterdam PCOS Consensus Workshop. However, therapy and diagnosis of PCOS showed a uniform treatment pattern, and the current recommendations found in international literature have been widely implemented into clinical practice.

Chinese herbal medicine (CHM) [3] and acupuncture [4] have eminent advantages in treating patients with PCOS. Acupuncture is a safe and effective treatment for PCOS as the adverse effects of pharmacologic interventions are not expected by women with PCOS. Acupuncture therapy may have a role in PCOS by increasing blood flow to the ovaries, reducing ovarian volume and the number of ovarian cysts, controlling hyperglycemia through increasing insulin sensitivity and insulin levels, reducing cortisol levels and assisting in weight loss and anorexia [4]. According to the updated Cochrane Database on the effects of acupuncture in PCOS [5], although no truly randomized controlled trials of acupuncture for PCOS were found, non-randomized trials have demonstrated that acupuncture is a perfect treatment for PCOS with lower associated adverse events rate, decreased risk of multiple pregnancies, and cost effective. However, can acupuncture enhance the efficacy of Chinese herbal medicine (CHM) in treating PCOS? The present study was designed to address it through model rats induced by testosterone propionate.

Preparation of the Extracts of the Chinese Formula

The Chinese herbal medicine used to treat PCOS were composed with 20g of Radix Astragali, 35g of Radix Rehmanniae Preparata, 30g of Cuscuta chinensis Lam, 35g of Fructus Ligustri Lucidi, 30g of Fructus Psoraleae, 20g of Radix Salviae Miltiorrhizae and 20g of Rubus idaeus Linn. The crude herbal materials were extracted by 10x boiling water for 60min. After filtration, the extraction procedure was repeated once with 8x boiling water. All the filtrates were combined and condensed under reduced pressure and freeze dried.

Forty neonatal female Sprague-Dawley 9-day old rats obtained from the Experimental Animal Centre, Zhejiang University (Hangzhou, China), were grouped and housed together in a temperature-controlled room with a 12-hour light: dark cycle and maintained at a constant temperature of 25? and humidity of 55%. The rats were randomly divided into normal control group (Group A), model group (Group B), CHM combined with acupuncture group (Group C) and CHM group (Group D), with ten rats in each group. All of the rats were fed with standard pelleted food and plain tap water ad libitum. The control rats of Group A received vehicle (propylene) only. The rats in Groups B, C and D were injected (s.c.) with 1.25 mg of testosterone propionate (Jinyao amino acid Ltd., Tianjin, China) dissolved in vehicle to establish PCOS model rats [6]. Rats were weaned from their mothers at 21 days old and kept under the same controlled conditions until needed. Vaginal smears were examined daily for 10 consecutive days from 70 days of age. The whole protocol of the study was conducted based on the National Research Council's protocol for the care and use of laboratory animals and was approved by the Institutional Review Board. All the model rats with PCOS were successfully established at the end of the tenth week following the day of injection of testosterone propionate. The animals in each of the groups were received the following treatment, respectively. The rats in Groups A and B were orally treated with 2ml of water. The rats in Group C were treated with a combination of oral administration of the extracts of the Chinese herbal formula (0.6g/kg) dissolved in 2ml of water and acupuncture. Thirty minutes following the oral administration of the herbal extracts, the rats of Group C were subjected to acupuncture at the following acupoints: Jizhong (Du6), Dazhui (Du14) and Zhongwan (Ren12). All the acupoints and the stainless steel needles were sterilized with 75% alcohol. The rats were anesthetized with sodium pentobarbital (40 mg/kg, i.p.) before acupuncture treatment. The needles were inserted 2 mm into Jizhong (Du6), Dazhui (Du14) and Zhongwan (Ren12) and then were connected to an electro- therapeutic apparatus (Model G6805-2, Shanghai, China) for 15 min through clip electrodes. High-frequency (100Hz) and low frequency (20Hz) electronic stimulation were used interchangeably with intensity range between 5mA and 25 mA. Slight twitches of the lower limbs of rats were found. The acupuncture treatment was continued every two days and the combined treatment continued for 28 days. The rats of Group D were gavaged with the extracts of the Chinese herbal formula for 28 days dissolved in 0.5% of CMC with the dosage of 2.5g/kg. Vaginal smears were examined daily till the end the treatment. Two hours following the end of the treatment schedule of 28 days, animals were anesthetized with sodium pentobarbital (40 mg/kg, i.p.). Blood samples were taken and the animals were killed under deep ether anesthesia. The collected blood samples were centrifuged, sera were frozen at -80°C until the time of assay. Ovaries were snap frozen in a 2-methylbutane/dry-ice bath and stored at -80°C.

Measurement of sex hormones in the serum

The levels of total testosterone (TT), sex hormone binding globulin (SHBG), androstenedione, follicle-stimulating hormone (FSH) and luteinizing hormone (LH) in the serum of rats were examined with ELISA (R&D Systems, MN, USA). FAI was calculated as TT (nmol/l) divided by SHBG (nmol/l)×100 [7]. All the measurements were carried out in duplicate and were conducted according to the manufacturer’s instruction. Both intra- and interassay coefficients of variation were less than 10%.

Isolation of the total RNA was performed by using the RNAisoTM Reagent (TAKARA, Dalian, China), according to the manufacturer’s instructions. The purity and concentration of RNA were determined by Nano- Drop®ND-100 Spectrophotometer (Thermo Fisher Scientific Inc, USA). Then cDNA was prepared from 500ng of total RNA by reverse transcription, using the PrimeScriptTM RT reagent Kit (Perfect Real Time, TAKARA, Dalian, China). The cDNA samples were diluted in DNase- and RNase-free water at a proportion of 1:3 before further analysis. Quantitative real-time PCR was performed by using the iCycler iQ Real-Time Detection System (Bio-Rad). The PPARG and glyceraldehyde-3- phosphate dehydrogenase (GAPDH) gene specific primers for rats were provided by Sangon, Shanghai, China. PCR reactions were carried out using 2μL of cDNA, 10 μM of each primer, and 2×SYBR® Premix Ex TaqTM (TAKARA) in 25-μL reactions. Thermal cycling conditions were 95°C for 3 minutes, followed by 40 cycles of 95°C for 20 seconds and 60.0°C for 1 minute. A final melting curve verified formation of single-product. Gene starting quantity was based on the cycle threshold (Ct) method. A control cDNA dilution series of known concentration was constructed for each gene to establish a standard curve, plotting the logarithm of the standard concentration against the Ct values. The samples were quantified from the measured Ct values by interpolation, using the regression equation. Each value was normalized to GAPDH to control for the amount of the input cDNA. The threshold cycle value for GAPDH mRNA was subtracted from that of the target gene, and the mRNA levels of the target gene were expressed as 2−ΔCt.

Results were analyzed by an independent universitystatistician using the computer software, Statistical Package for Social Sciences (SPSS 15.0 for Windows). Analysis of variance (ANOVA) was used for comparison of all the indicators. For all hypothesis tests, a 5% significance level (P<0.05) and two-tailed tests were used. 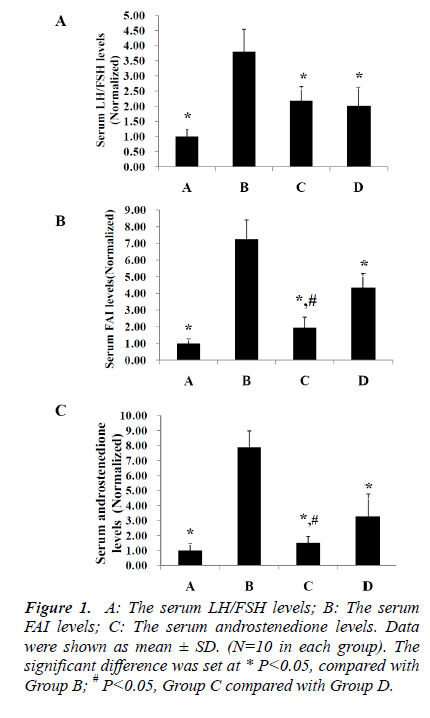 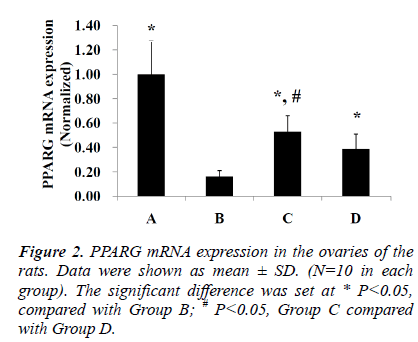 As shown in Figure 1, the serum LH/FSH, FAI and androstenedione levels in Groups A, C and D were significantly lower than those of Group B (P<0.05), The findings proved that testosterone propionate could successfully induced PCOS in rats. There was no significant difference on the serum LH/FSH levels between Groups C and D (P>0.05; Figure 1 A). However, the serum FAI and androstenedione levels in Group C were markedly lower than those of Group D (P>0.05).

PPARG mRNA expression in the ovaries of the rats

As PCOS is a heterogeneous endocrine disorder, which presents a complex endocrine and metabolic syndrome [8], not a single PCOS model rats may represent all the characteristics of PCOS [9, 10]. In the present study, we de veloped PCOS model rats by single subcutaneous injection of testosterone propionate on the 9th day after birth [6], which was characterized by hyperandrogenemia, anovulation and polycystic ovary. An “androgen-sensitive period” existed during the first ten days of postnatal life.

in rats and mice, especially on the 9th day following birth [6, 11]. At the 7th day following birth, one or two row of GCs surrounding the oocytes were identified in mice [12]. In postnatal ovaries of rats, primordial, primary, preantral and antral follicle populations start to appear in a sequential manner at the early stages of folliculogenesis [13]. Primordial follicles assemble and develop during the early postnatal periods in rodents, which is a critical process of female reproduction[14].

As FAI and androstendione have the highest clinical utility to evaluate PCOS-associated hyperandrogenism, which can well represent the hyperandrogenism of PCOS model rats, they were selected as the indicators in the study [15, 16]. However, further studies are needed to formulate the mechanism(s) that how acupuncture treatment could significantly enhance the efficacy of CHM in experimental rats with PCOS.

Conclusion. Concurrent treatment of acupuncture could significantly enhance the efficacy of CHM in rats with PCOS.