1Tianjin Key Laboratory of the Design and Intelligent Control of the Advanced Mechatronical System, Tianjin University of Technology, Tianjin, China

Results: According to the experimental data, the sunken sternum was raised up 40 mm; the Cobb angle of the scoliosis was reduced from 20º to 15.8º, the results of electrometric measurement experiment were basically consistent with those of the numerical simulation and clinic.

Conclusions: This study revealed the strain distribution rules in the view of experiment, and provides a reliable verification method for numerical simulation of the correction of pectus excavatum with scoliosisas well as a reference to optimize the Nuss procedures, to improve the success rate of surgery and to reduce the risk of surgery. With the application of 3D print technology, the limitation of the ethnics and difficulty in producing artificial thoracic model can be overcome.

The finite element method is an established technique in the field of biomechanics and is used for analysis of various medical situations [8]. Studies have been conducted in recent years to elucidate the Nuss procedure by numerical simulation [7-13], and have obtained some achievements. However, there are still many unsolved problems in the Nuss procedure: the accuracy of the three-dimensional solid model assembly and the finite element model is not sufficient; the given boundary conditions are lack of scientific basis, and the connection of bones is not clear and defined. Therefore, numerical simulation needs to be verified by electrometric measurement experimental. However, restricted by ethics, experiments cannot be conducted in vivo.

To solve the above problems, the case of the artificial thoracic model was built based on the rapid prototyping technology-3D printing in this paper, and electrometric measurement experiment was conducted to get the strain distribution. Numerical simulation model was validated and modified on the bases of the experimental results. Guided by the simulation results in clinic, the Nuss procedure was optimized and the risk of the operation reduced.

An unsymmetrical pectus excavatum with scoliosis patient (19 y, male) receiving Nuss procedure was included in our study. His concave located on the right of the center and was 40 mm deep in the sagittal plane. His thoracic vertebra bowed 20º to the right, with scoliosis on the same side with the concave. All the operation and medical examinations were conducted in Department of Thoracic Surgery, Military General Hospital of Beijing PLA. The study protocol was approved by the Institutional Review Board of the hospital and written informed consent was obtained from the patient.

Firstly, 3D model of sternum, ribs and thoracic vertebra was built on the base of CT data with Mimics (Materialise Company), Geomagic studio (Geomagic Company) and Pro/E (PTC) software. Secondly, Rapid Prototyping-3D printer technology was used to create sternum, ribs and thoracic vertebra’s model, as shown in Figure 1. Thirdly, in order to keep accuracy of the assembly model, the finite element model of the case was built by ANSYS (ANSYS Company). 12 thoracic vertebras were strung together with aluminium alloy, reinforced with screws 12 pairs of ribs. 2 sternums were connected with ribs by thin metal wire. All the bones were assembled in reference of the finite element model. The final artificial thoracic model is shown in Figures 2 and 3. 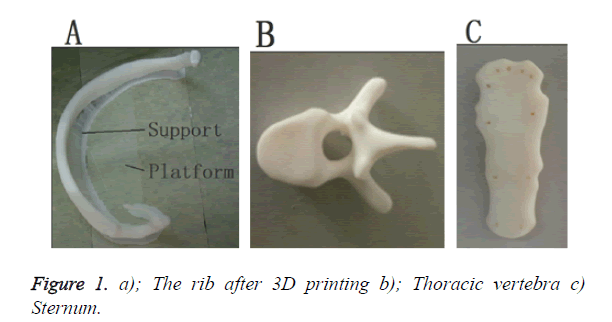 Figure 1. a); The rib after 3D printing b); Thoracic vertebra c) Sternum. 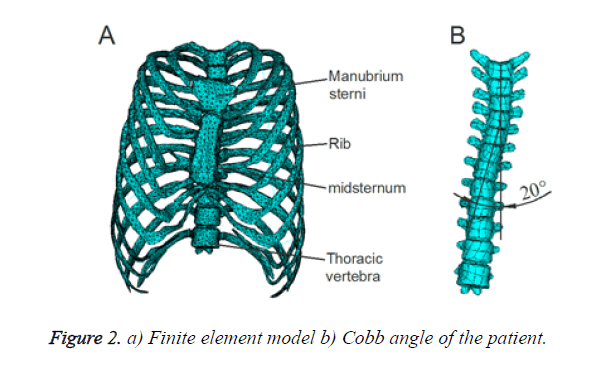 Figure 2. a) Finite element model b) Cobb angle of the patient. 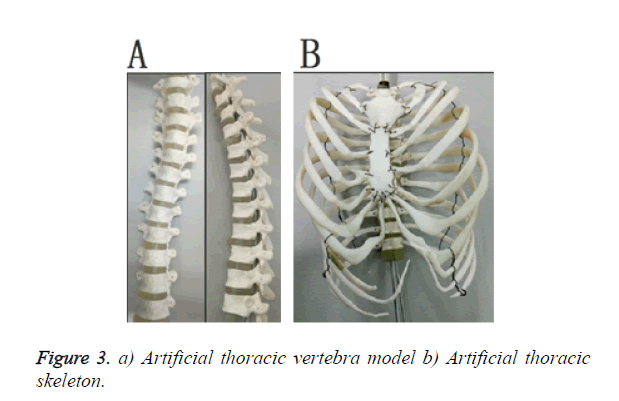 In order to track the strain variation of the artificial thoracic model during electrometric measurement experiment and to reduce the blindness, the paste of the strain gauges were directed by the results of numerical simulation. 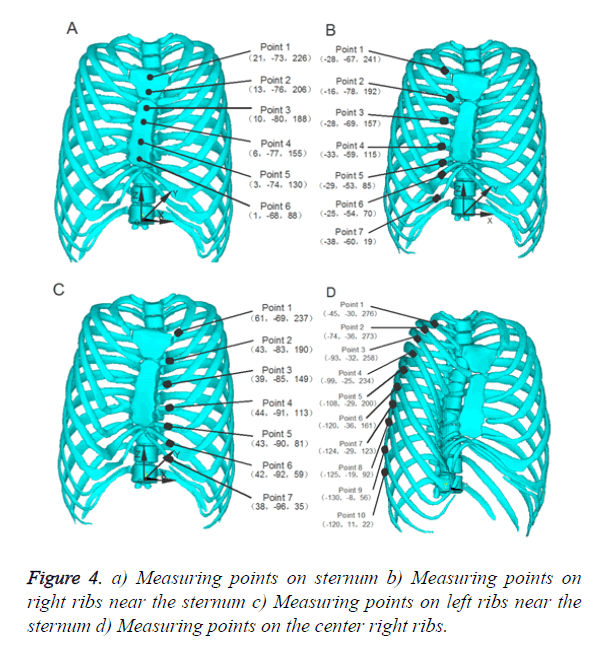 The experiment was carried out by the combination of WDW-10 microcomputer control electronic-mechanical universal testing machine (Changchun Kexin Testing Technology Co., LTD) and static/dynamic resistance strain gauge (Donghua Testing Technology Co., LTD). Then the spine model was fixed on the self-made white plaster clamp model, was finally put on WDW-10 electronic universal testing machine. The raising displacement load was applied on the under surface of sternum between the 4th and 5th ribs until the value reached 40 mm. The rising speed was 1 mm/min, and the strain sample interval was 1 sec. The tensile experiment process was repeated 5 times to ensure reliability of the experiment. The interval for each load was 30 minutes to ensure the thorax model to restore to a normal position The model and load device for experiment is shown in Figure 5, as well as the load-displacement curve after 5 repeated load tests is shown in Figure 6. 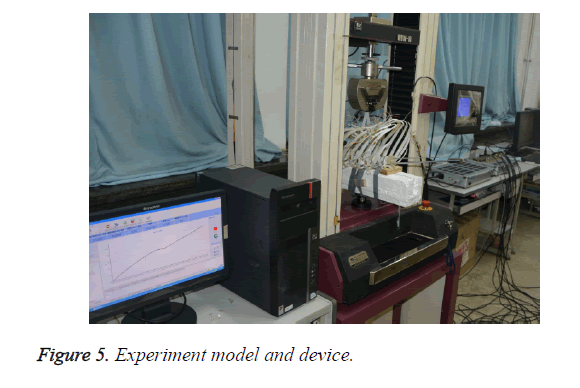 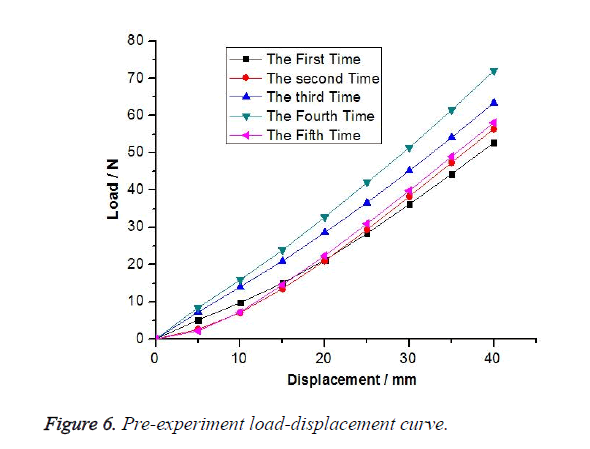 To ensure the reliability of the experiment, we repeated this experiment three times. The following test data is the mean value of the three experiments. All these results illustrate that four groups of experiment results support the repeatability of data. 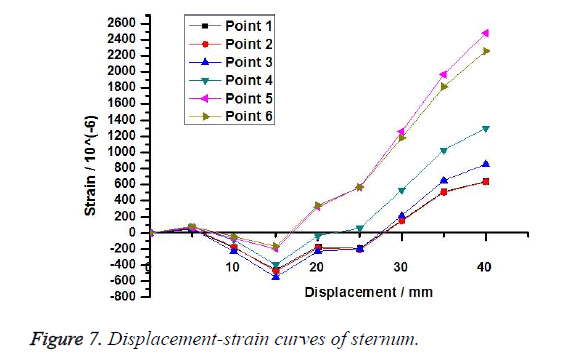 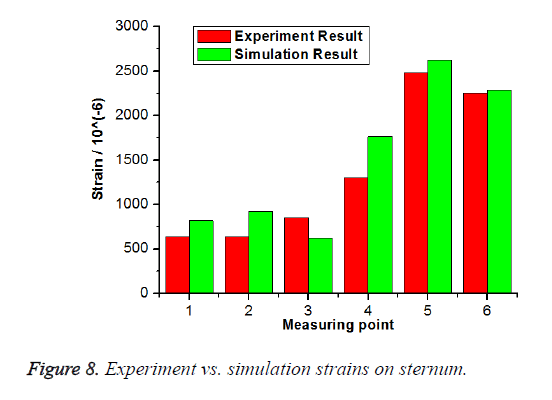 Strain distribution of measuring points on right ribs near the sternum

Displacement-strain curve of measuring points on right ribs near the sternum and the result comparison of experiment and numerical simulation are shown in Figures 9 and 10 respectively. All measuring points undergo tensile strains, which enlarge rapidly as the displacement increase. The maximum strain is 9467 με at measuring point 6, on which the deformation is the largest while the sternum is lifting. 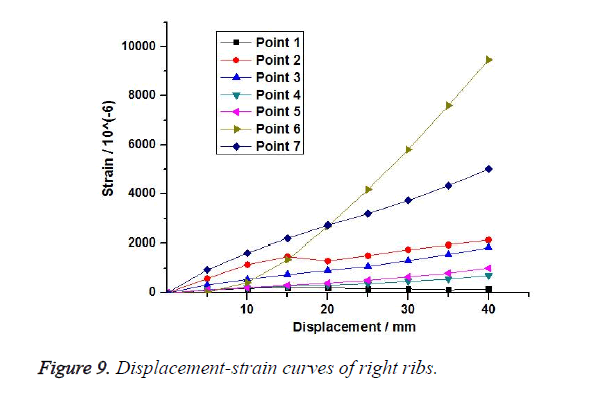 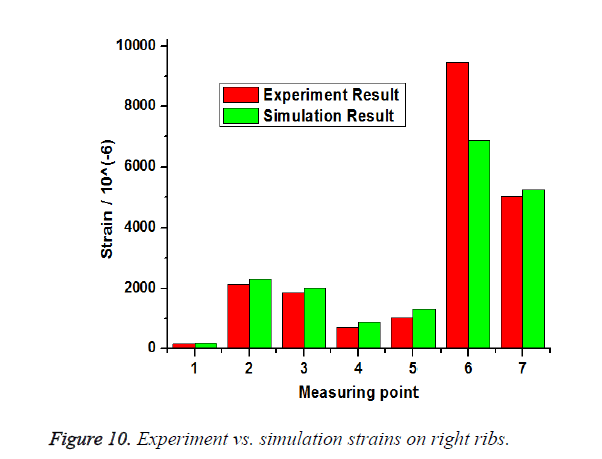 Strain distribution of measuring points on left ribs near the sternum 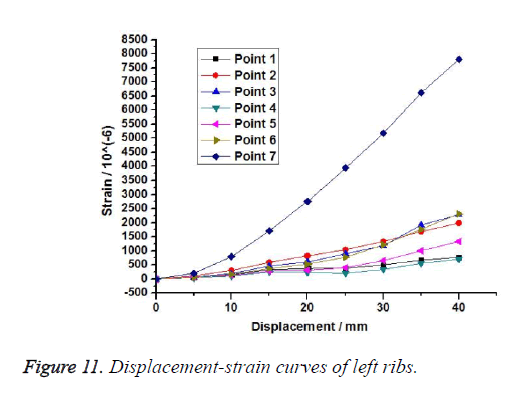 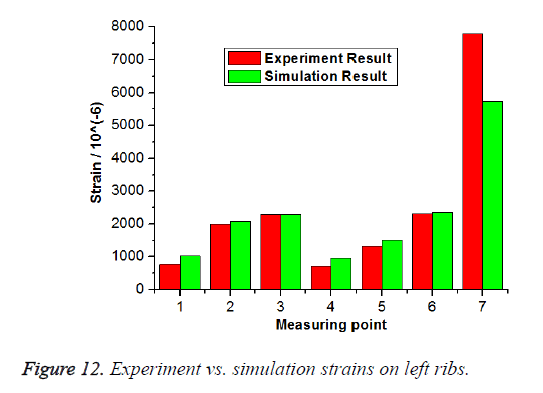 Strain distribution of measuring points on the center of right ribs

Displacement-strain curve of measuring points on the center of right ribs and the result comparison of experiment and numerical simulation are shown in Figures 13 and 14 respectively. Points 8 and 9 undergo tensile strain, the rest points undergo compressional strains. The maximum strain is -1602 με at measuring point 3, on which the deformation is the largest while the sternum is lifting. 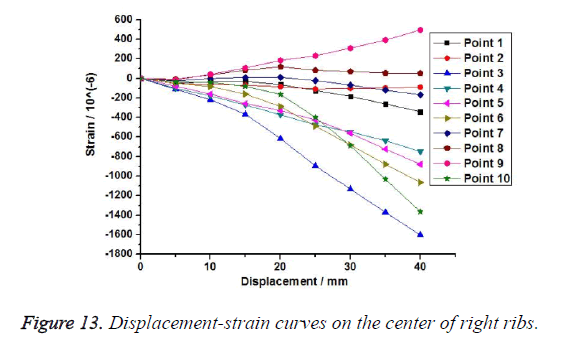 Figure 13. Displacement-strain curves on the center of right ribs. 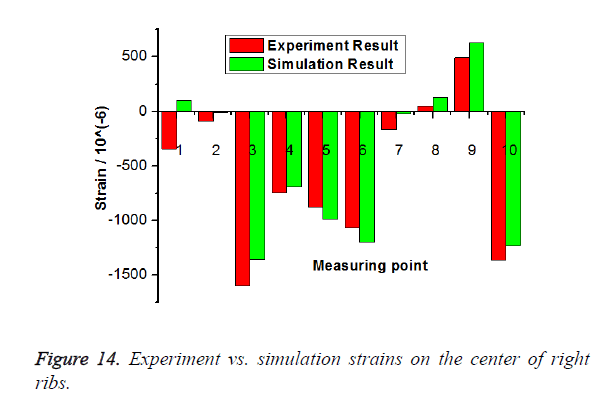 Figure 14. Experiment vs. simulation strains on the center of right ribs.

Scoliosis variation after the correction

Experiment result indicates that the scoliosis is improved after the correction. Cobb angle of the corrected artificial thoracic vertebras is 15.8º, 4.2º smaller than that of uncorrected spine, as shown in Figure 15. Numerical simulation and clinic surgery results of scoliosis are 13º and 15º, and the magnitude of the Cobb angles reduces 7º and 5º respectively compared with that of uncorrected spines, as shown in Figures 15 and 16. 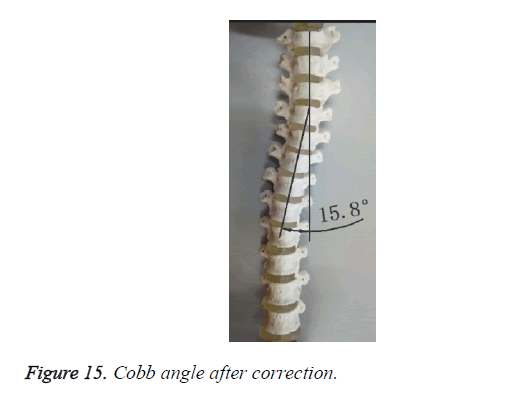 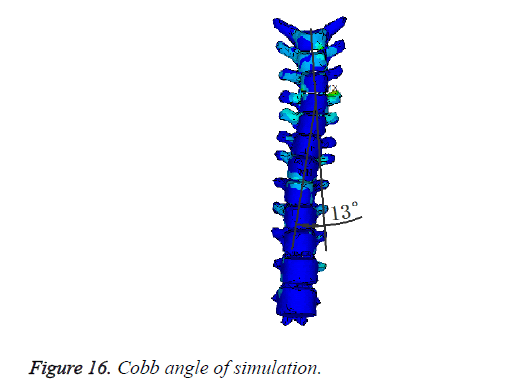 Outcomes of experiment are basically consistent with those of numerical simulation and clinic surgery.

Electrometric measurement experiments were conducted on an artificial thoracic model of a patient in this study, and the strain distribution rules of the thoracic skeleton of numerical simulation of the Nuss procedure was evaluated.

To date, several studies on the Nuss procedure have been conducted with numerical simulation [6-14], but no experiments have been done on account of ethnic and shortage of corpse resource. Artificial thoracic model constructed by 3D printing technology is used in electrometric measurement experiment to verify the results of numerical simulation, which provides a new approach in studying mechanical properties of thoracic skeleton. This technique and experimental data may be used to support numerical simulations of correction process, while to provide references to surgeons [11,15,16] in surgery planning.

Nevertheless, because of ethical restrictions and shortage of corpse resource, experiments were performed on a patient’s artificial thoracic model. There are many factors affecting the correction process of the patient’s artificial thoracic model [17-20]. The human thoracic skeleton is complex because it includes the sternum, thoracic vertebra, ribs, costal cartilage, and vertebral discs, ligaments and intercostal muscles. Artificial thoracic model consists of only the sternum, thoracic vertebra, ribs and vertebral discs, except costal cartilage, ligaments and intercostal muscles which cannot be printed by 3D printing because of the limitations of this technique.

Additionally, there was difference in the materials of vertebral discs between models of the experiment and human thorax, the experimental vertebral discs is harder than that of human being. The intention of this study aims to provide a preliminary understanding of the relationship between numerical simulation and experimental verification techniques to simulate the Nuss procedure. A large amount of artificial thoracic models will be constructed to perform electrometric measurement experiments in the future to get further investigations.

The strain distribution rules were revealed by the electrometric measurement experiment in this study. The technology of 3D-printing was introduced into electrometric measurement experiment to verify the method and result of numerical simulation of Nuss procedure, the limitation of the ethnics and difficulty in producing artificial thoracic model can be overcome. With the verified numerical simulation of the correction of pectus excavatum with scoliosis, the Nuss procedures planning can be optimized, the success rate of surgery improved, and the risk of surgery reduced.

None of us has financial or personal relationships with people or organizations that could inappropriately influence our work.