Methods: 100 patients admitted in department of neurology of our hospital were enrolled in the study and assigned into the cerebral ischemic stroke group without OSAS (control group, n=50) and the cerebral ischemic stroke group with OSAS (observation group, n=50). whose Apnea Hypopnea Index (AHI) and minimal arterial oxygen saturation (SaO2 min) at night were detected and recorded by a multi-lead sleep monitor and whose hypersensitive C-Reactive Protein (Hs-CRP), Fibrinogen, (Fg), Nuclear Factor-κB (NF-κB), and Tumor Necrosis Factor (TNF-α) were tested by ELISA kits.

Conclusion: OSAS is able to impact the occurrence of ischemic stroke but also aggravate it. The possible inflammatory mechanism is that it produces massive Hs-CRP by activating NF-κB/TNF-α signal pathway, then damages vascular endothelial function, and finally results in atherosclerosis and its development.

Obstructive Sleep Apnea Syndrome (OSAS) is a common sleep and respiratory disorders, of which main manifestations include repetitively suspended breathing caused by upper respiratory tract stenosis or obstruction in sleep, daytime sleepiness, and cognitive dysfunction. A large number of literature report [1,2] that OSAS and ischemic stroke show a high coincidence and are mutually associated. A study shows [3] that OSAS is not only an independent risk factor for the occurrence of ischemic stroke but also add its risk and aggravate its prognosis [4].

This study involved 100 patients who were admitted in department of neurology of our hospital from July 2016 to May 2017 and assigned two groups: observation group and control group. The former was the cerebral ischemic stroke group with OSAS (n=50) and the latter was the cerebral ischemic stroke group without OSAS (n=50); for two groups, there was no significant difference in ages. In this study, the diagnosis of ischemic stroke was in accordance with Guidelines for the diagnosis and treatment of acute ischemic stroke in China issued in 2010 [6]; OSAS was diagnosed on the basis of Guidelines for the diagnosis and treatment of obstructive sleep apnea-hypopnea syndrome published in 2011 [7]; If patients had chronic obstructive pulmonary disease, or consciousness disorders due to severe nervous system injuries, or severe facial deformity, and if they were taking drugs which affects sleep, like sedatives, and if they had serious sleep disorder, and if patients who already underwent surgery treatment or put on respirator could not endure examinations, they would be excluded.

ELISA kits of Hs-CRP, Fg, NF-κB, and TNF-α were provided by Abcam.

All participants were monitored by multi-lead sleep monitor at admission, synchronously recording and calculating their AHI and night time SaO2 min.

All of them, at d 2 of hospital-stay, were collected 5 ml fasting venous blood for detecting Hs-CRP, Fg, NF-κB, and TNF-α. The blood was centrifugated at 2,500 rpm for 30 min, stored at -80°C after plasma separation, and tested together. Then researchers conducted corresponding experiments according to the introduction of ELISA kits, applied quantitative method to test, drew standard curves, and calculated the level of Hs-CRP, Fg, NF-κB, and TNF-α in samples based on OD value in samples.

All data was analysed by software SPSS17.0, the results were expressed as means ± SD for normality, and means between two groups which were normality distributed were compared with the independent sample t test. The statistical significance was defined as P<0.05.

The testing results of AHI and SaO2 min between two groups are seen in Figure 1. Compared with the control group, AHI increased significantly (p<0.01), but SaO2 min decreased obviously (p<0.05) in the observation group. 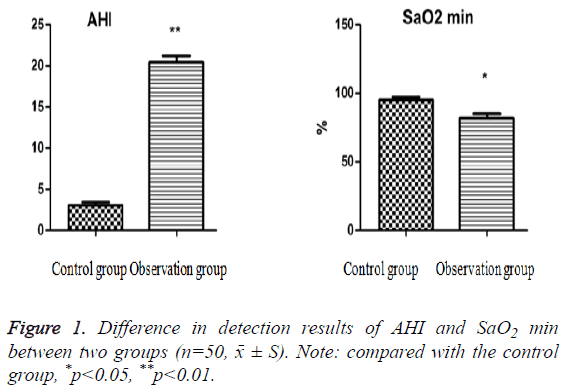 The difference in detection results of Hs-CRP, Fg, NF- κB, and TNF-α between two groups

In recent years, the relationship between OSAS and ischemic stroke has been a hot spot of medical research. Some researches show that OSAS is not only an independent risk factor for the occurrence of ischemic stroke, but also can affect its prognosis. Yaggi et al. [8], through a prospective epidemiological study, find that OSAS can markedly increase the risk of ischemic stroke, and this risk happens independently, unrelated with other factors, such as hypertension, diabetes, smoking, and atrial fibrillation. Through home follow-up and health education, Xie et al. [9], execute a study about 54 patients with ischemic stroke and OSAS who visited in their hospital, and they find that after eliminating such factors, like age, heart diseases, hypertension, diabetes, smoking, and atrial fibrillation, patients with ischemic stroke and OSAS recover lagging in cognitive function and have worse living ability, which is positively correlated with the severity degrees of OSAS. In this study, we discovered that the levels of AHI and SaO2 min in cerebral ischemic stroke group without OSAS (control group) and the cerebral ischemic stroke group with OSAS (observation group) were improved significantly indicating OSAS was able to add the risk of ischemic stroke, which was in accordance with the past researches [10-12].

The possible mechanism that OSAS impacts the occurrence of ischemic stroke is that sleep apnea occurs and leads to repetitive airway obstruction, resulting in a series of physiological reactions, such as sympathetic nerves stimulation, hypoxemia, hypercarbia, and vascular injury. However, its specific mechanisms, especially the inflammatory mechanism, are unclear, so this study is to explore and explain the effect of OSAS on the occurrence of ischemic stroke through the inflammatory mechanism.

As a non-specific marker of acute systemic inflammation, Hs- CRP can point out the activity of inflammatory response and the development of atherosclerosis. Ryan et al. [14], report that patients with OSAS and ischemic stroke suffer chronical and intermittent hypoxemia during nocturnal sleep, which can induce the production of NF-κB, TNF-α, IL-1, IL-8, MCP-1, and ICAM-1, and then lead liver to produce massive Hs-CRP that is important for the formation of atherosclerotic plaques. A study [13] shows that Hs-CRP can promote the accumulation of Low Density Lipoprotein Cholesterol (LDL-C) which is assimilated by macrophages around the plague, quickening and aggravating atherosclerosis. In the study, we found that the level of Hs-CRP in cerebral ischemic stroke group without OSAS (control group) was much lower than that in the cerebral ischemic stroke group with OSAS (observation group), cueing that Hs-CRP was one of inflammatory mechanisms that OSAS impacted the occurrence of ischemic stroke.

Fg, a kind of protein related to coagulation function (coagulation factor), is able to prompt the development of atherosclerosis and the occurrence of stroke. High level of Fg in plasma can cause and aggravate ischemic stroke through three ways [15]. One important way increases blood viscosity to slow blood flow in tissues and organs, easily promoting thrombosis. Von et al. discover that under intermittent hypoxia and the stimulation of inflammatory response, the level of Fg and hemoglobin of patients with OSAS raise to change blood component and add blood viscosity, which results in thrombosis, even ischemic stroke [16]. In the study, we identified that the level of Fg in cerebral ischemic stroke group without OSAS (control group) reduced much more than that in the cerebral ischemic stroke group with OSAS (observation group), indicating that Fg was one of inflammatory mechanisms that OSAS impacted the occurrence of ischemic stroke.

In conclusion, OSAS can impact and aggravate ischemic stroke, of which possible inflammatory mechanism is that it mainly activates NF-κB/TNF-α signal pathway to cause massive Hs-CRP and injure vascular endothelial function, finally leading to atherosclerosis. Therefore, we should pay more attention to the occurrence of OSAS, especially when patients have ischemic stroke accompanied by OSAS, corresponding therapies for OSAS should be used, at the same time, to promote them recovery, improving prognosis.