Methods: From 2014 to May 2017 a team composed of a physiotherapist and an occupational therapist supervised by a medical doctor visited newly hospitalized patients at Lund’s University Hospital. The team measured BMI, blood pressure, pulse, saturation and registered the patients’ age, sex, number and types of medications and symptoms for admittance. They were also able to register blood tests taken, the patients’ final diagnosis, the number of days in hospital, the number of medications at discharge, the number of re-hospitalizations and the number of deaths at follow-up after 6 months. Patients with complete blood pressure measurements both in the lying position and standing position were included in our study (n=210). These patients were divided into two groups, the orthostatic hypotension group (OH-group, n=119) and the normotensive group (NT-group, n=91). The division was made based on the generally accepted definition of orthostatic hypotension. Calculations for comparison in-between the two groups were done using the Student’s T-test or Mann-Whitney U-test for continuous variables and the Pearsons Chi-square test for dichotomous variables.

Orthostatic hypotension is a symptom due to multifactorial causes that occurs when the cardiovascular reflexes fail to maintain blood pressure when standing from a supine position. The impaired orthostatic response may lead to symptoms of cerebral hypoperfusion and syncopal attacks directly by abrupt or progressive falls in blood pressure, or indirectly by triggering the vasovagal reflex [1]. Of note, although some patients with orthostatic hypotension may present with symptoms of dizziness or syncope, most are asymptomatic, which may make orthostatic hypotension underdiagnosed in usual clinical settings [2]. The prevalence varies significantly depending on the population studied. Orthostatic hypotension is more prevalent in elderly people. Moreover, it is quite common in hospitalized patients [3]. Intensive studies during the past decades shed light on the clinical relevance and implications [4]. These studies not only link orthostatic hypotension to the incidence of many cardiovascular diseases, such as coronary artery disease [5], stroke [6-8], congestive heart failure [9-11], atrial fibrillation [12], and renal failure [13], but they also relate its presence to increased risk of non-cardiovascular-related conditions [14-16]. For example, Xin et al. published a meta-analysis of eight published articles from 7 cohorts, consisting of 64,782 participants. During a mean follow-up of 15.2 years, 5719 coronary heart disease events and 3657 stroke events occurs. The overall results of the meta-analysis indicate that orthostatic hypotension is associated with significant increased risk for incident coronary heart disease (HR: 1.32, 1.12-1.56) and stroke (HR: 1.19, 1.08-1.30), which are independent of conventional risk factors [8].

Over a four-year period (from 2014 to May 2017), a dedicated team composed of a physiotherapist and a medical doctor visited newly hospitalized patients at Lund’s University Hospital in Sweden. The team measured BMI, blood pressure, pulse, and oxygen saturation and also recorded the patients’ age, sex, types of medications, and symptoms prompting hospitalization.

For the patients in this study, there were a variety of presenting symptoms and diagnoses at both hospital admittance and discharge. Thus, we decided to only report data for those symptoms and diagnoses where the number of cases was sufficient to make meaningful comparisons. The team recorded and presented the main complaints at admission, i.e. the patients’ most frequently recurring symptoms. We did not attempt to describe the included patients’ previous diseases since the study was open to any elderly patient, making it rational to decide that the included study population would be a reasonable representation of the general Swedish population in their eighties coming to the hospital for medical attention.

This study was approved by the Regional Ethical Review Board in Lund, Sweden, D.no 2016/819. The study conformed to the principles outlined in the Declaration of Helsinki.

Calculations for comparison between the two groups were done using the Student’s T-test or Mann-Whitney U-test for continuous variables and the Pearson’s Chi-square test for dichotomous variables. Statistical significance was set at p <0.05. Statistics were performed using the IBM SPSS Statistics 22 program.

SEM = Standard Error of the Mean;
* SEM calculated from mean of orthostatic = 1 and non-orthostatic = 0, Mean value not shown.

Table 4 shows the patients’ diagnoses at the time of hospital discharge. In order to increase statistical power, some of the diagnoses are shown together in a combined endpoint of total cardiovascular disease, total lung disease, or total infectious disease (See the Methods section for explanation). There are fewer total cardiovascular disease diagnoses in the nonorthostatic group (p <0.05). Put in terms of relative risk, the results show the chance of not having cardiovascular disease to be 33% higher in the non-orthostatic group compared to the orthostatic group, RR 1.33 (1.00-1.77). See also Figure 1. There are no differences between groups when it comes to total lung and infectious diseases, heart failure, chronic obstructive pulmonary disease, or cancer. There is a statistically significant higher occurrence of renal failures (p <0.05) and a tendency towards more atrial fibrillations in the orthostatic group (p=0.08). 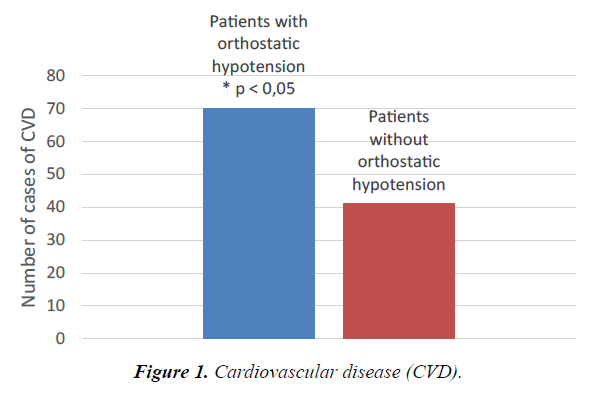 SEM = Standard Error of the Mean;
* SEM calculated from mean of orthostatic = 1 and non-orthostatic = 0, Mean value not shown.
^ For reenrollments, the same patient can have had several visits to the hospital within 1 or 6 months. 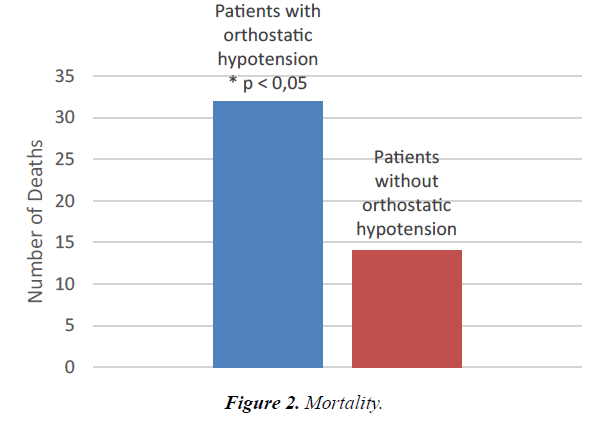 Our records indicate that patients with orthostatic hypotension stayed in the hospital significantly longer than patients without orthostatic hypotension. There are several possible explanations for this. One obvious possibility is that they were simply sicker. The fact that more of them had died prior to the six-month follow-up supports this hypothesis. It is also possible that the orthostatic patients were frailer, as they were a little older (mean age 83.6 vs. 82.7 years). There are significantly more males in the orthostatic group (61 vs. 25, p <0.01). Given that males have shorter life expectancies than women, it is not impossible that a gender factor may contribute to the results. The orthostatic patients also had a lower BMI (23.3 vs. 24.7; p=0.12), implying that the patients with orthostatic hypotension were less well-nourished and less resistant to stressors than their counterparts. The “orthostatics” also had slightly more medications at the time of hospital admittance (data not shown), which could imply that they suffered from conditions that needed more aggressive treatment and/or were more susceptible to side effects. The fact that they had a greater tendency towards seeking medical attention based on syncope than the non-orthostatics (11 vs. 3, p=0.09) could suggest both overmedication and/or greater blood pressure falls, but also concomitant cardiovascular diseases like arrhythmias.

Another interesting finding from our study is the significantly lower mean glucose level in the orthostatic hypotension group compared to the non-orthostatic group (p<0.01) at admission.

This finding also supports the hypothesis that the orthostatic patients were frailer, possibly caused by malnourishment resulting in lower BMI. Even though this argument seems to fit our data, it still seems contrary to previous research that has found a strong association between diabetes and orthostatic hypotension [29]. We see no such association in our study, in which we have the same number of diabetics in both groups (data not shown), no differences in diabetes medications (p=0.37), and no differences in medicines that can increase glucose levels (beta-blockers, p=0.35; diuretics, p=0.31). Since the relationship between lower glucose levels and orthostatic hypotension is so statistically strong in our results (p<0.01), we hypothesize that there might be other novel pathophysiological mechanisms at work here where hypoglycemia and orthostatic hypotension could interact. As an example, Radikova et al. found that orthostatic stress may affect the neuroendocrine response to subsequent hypoglycemia [30].

Our results also indicate that more patients in the orthostatic group were discharged from the hospital with the diagnosis of renal failure as compared to patients in the non-orthostatic group. Specifically, the former group documents seven cases of renal failure compared to none in the latter. We acknowledge that, although this is a statistically significantly difference between groups, it is difficult to draw any conclusions based on so few cases. Nevertheless, the result is in line with previous research. For example, a cross-sectional study by Canney et al., in a cohort from The Irish Longitudinal Study on Ageing, record participants with eGFR <60 mL/min per 1.73 m2 as approximately twice as likely to have sustained orthostatic hypotension and, moreover, the results show a graded association between eGFR categories and impaired orthostatic BP stabilization, particularly within the first minute of standing [31].

Our current study, as documented here, has many strengths. One major strength is that, to the best of our knowledge, ours is the first clinical study in many years to follow patients in a structured way from inclusion to follow-up with the same professional hospital team to assess the prognostic meaning of blood pressure changes in patients from supine to standing positions. Another strength is the high mean patient age of about 83 years-an age in which outcomes like cardiovascular endpoints and mortality are common, reducing the need for a large number of study participants. Since there still are so few studies performed on the very elderly, our study can be used by researchers in the immediate future as a foundation for power calculations in similar upcoming studies. Furthermore, our study provides results from the modern clinical praxis in the southern parts of Sweden. The study population is quite representative for its region and age group since we did not attempt to deny any patient participation into the study based on any exclusion criteria. Taking an orthostatic blood pressure test is inexpensive, non-invasive, does not cause pain, is highly repeatable, and can be used as an educational tool for patient care. Furthermore, the orthostatic blood pressure test is an easy test to perform and, as this study shows, can be performed by a dedicated team to obtain valuable information; for example, signs of orthostatic hypotension pertaining to the risk of falls in the elderly population [33].

Our study does have several weaknesses. First, the number of patients studied is relatively low and may not be indicative of a larger group of patients. Second, the study is not randomized, controlled, matched, or blinded. Third, we have not attempted to adjust for any confounders. There are significantly more males in the orthostatic group than in the non-orthostatic group (p<0.01). This is also a very important finding, because it underlines the importance of measuring orthostatic blood pressure in elderly males. In the future, it will be important to determine whether the results in this study are caused by orthostatic hypotension alone or are influenced by other factors such as gender. Also, most of the patients had severe illnesses such as acute coronary syndromes, acute heart failures, infectious diseases and so forth, and it would be relevant to take into account the underlying cause of hospitalization in further studies in order to evaluate the impact of orthostatic hypotension per se. Fourth, our study does not allow us to draw conclusions as to whether orthostatic hypotension is a marker of generally increased risk of death, an intermediate variable in the causal pathway of cardiovascular risk factors, a simple measure of disease severity, or an independent causal mechanism. These will be important questions to address in upcoming studies.

Orthostatic hypotension is a symptom due to multifactorial causes that occurs when the cardiovascular reflexes fail to maintain blood pressure when standing from a supine position. This study shows increased cardiovascular disease, morbidity, and mortality in elderly patients with orthostatic hypotension compared to patients without orthostatic hypotension in a hospital setting. Our results differ somewhat from previous longitudinal studies, because our study encompass patients studied from inclusion to follow-up, patients with a very high mean age (about 83 years), and the data underlying the results has been recorded recently. The study results convey the importance of taking orthostatic blood pressure measurements in elderly patients. The orthostatic blood pressure test is a very inexpensive and easy test to perform and, considering the prognostic implications of this study, should be largely recommended in clinical practice.