Including perspective in tactile diagrams for the visually impaired: A short communication

Citation: Nguyen AM, Pawluk DTV. Including perspective in tactile diagrams for the visually impaired: A short communication. J Clin Ophthalmol 2021;5(4):431-432.

We comment on our recent research findings on the effectiveness of adding local cues to graphical projection perspective to improve the understanding of perspective in tactile diagrams by individuals who are blind or visually impaired (BVIs). Local cues were added by indicating the depth of a point on an object with respect to the reader by the thickness of the line of a raised line graphic at that point. The findings suggest that adding the proposed local cues improves performance, which may further improve through training.

Graphical projection perspective, frequently used in visual drawings and images in our everyday lives to relay depth information, is very difficult for individuals who are blind or visually impaired (BVIs) to comprehend in tactile diagrams. Both Edman [1] and the Braille Authority of North America [2] recommend the removal of depth perception from graphics to be presented in tactile form to BVIs. However, there are many diverse fields where perspective is an important part of using graphics, such as engineering, architecture, chemistry, mechanical repairs, assembly line workers, and more. Removing perspective significantly diminishes the utility of graphics in these areas. In addition, Heller and his colleagues [3,4] showed that both those visually impaired at birth (congenitally blind) and visually impaired later in life (adventitiously blind) can understand perspective.

We proposed a new method of representing perspective information for BVIs which is more appropriate for the limited, local field of view of touch/haptics compared to the wider, global field of view of vision. This method represents depth of a point on an object/scene with respect to the reader by the thickness of the line of a raised line graphic at that point. This allows depth to be inferred without reference to other parts of the graphic, as required by projection perspective. Our study examined the effectiveness of using this method of local cues compared to projection perspective alone by BVIs [5].

The experimental assessment compared traditionally used projection perspective to the new method we proposed that adds line thickness at each point on a line to indicate the depth of that point. Five similar geometric shapes of equal haptic complexity were 3D printed (Figure 1) and raised outlined diagrams of each shape from different perspectives were printed, one set of diagrams using traditional projection perspective (Method 1) and one with added line thickness to indicate depth (Method 2). The experiment compared the performance of 16 participants who were blind or visually impaired on their ability to use the two methods to: a) identify the correct 2D perspective diagram from 3 possibilities (the other two of which were randomly chosen from the pool of diagrams of the other 3D objects) that matched the 3D object presented, and b) show the view point being relayed by the diagram. Trials were blocked by method with the blocks in the first set presented in random order. After the first set of blocks, the set was repeated again (repetition), in counterbalanced order. This design was to minimize order effects on the differences between blocks (i.e., Method 1 and Method 2). 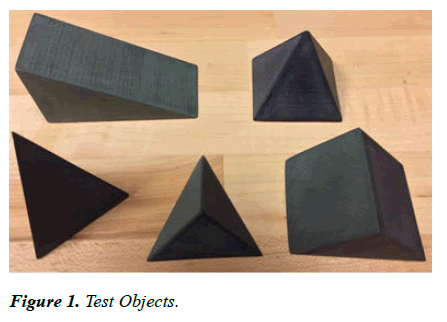 The main statistical analysis was done via SPSS, an interactive statistical software package used to analyze quantitative survey data, particularly the testing of hypotheses. Generalized estimated equations were used to model the outcome of the forced-choice question for picking the correct object and the open-ended question for picking the correct perspective. The models used a binary distribution with a logit link function to represent the output, a compound symmetric matrix for the correlation function (as we expected correlations between repeated measures), within subject variables of method, repetition, object and perspective (first or second created), and a between subject variable of blindness onset. For the forced choice question, both the method chosen (Wald χ2 (1,585)=7.147, p=0.008) and the method-repetition interaction (Wald χ2 (1,585)=4.272, p=0.039) were significant. However, pairwise testing of the marginal means (Table 1) found that only Method 2, Repetition 2 was statistically different from the other conditions.

The data analysis of the force choice question suggests that Method 2 (the addition of local cues) significantly improved performance but only for repetition 2. However, this also suggests that performance for Method 2 may increase with further repetition as the performance had not yet plateaued (as would be expected in other perceptual and motor tasks [6]). Results of the analysis of the open-ended question on perspective were consistent with these results, although the effect of repetition was not significant. Alternative local cues (e.g., changes in vibration frequency) may also be appropriate methods; however, humans can detect changes in thickness rather precisely [7] and they are relatively easy to create on raised line diagrams.

Further research is needed to examine the long-term effect of repetition and training, and the generalizability of this method to more complex raised line diagrams. Further research is also needed to examine differences in performance between the adventitiously and congenitally blind as our results conflict with Heller, who found the adventitiously blind to perform better than the congenitally blind in diagram perception.