One of the best way to reduce of greenhouse gas using of renewable energy actually renewable energies are as the best solution to reducing of global warming and it needs to reducing of fossil fuels. Country of Iran has a high potential in renewable energy such as solar, wind energy that can with a regular program use of them. The aim of this study is the analysis and assessment of solar and wind energy potentials in Zanjan city of Iran. At first, the required data from the national meteorological organization have been obtained and analyzed. A analysis has been carried out by HOMER software leads to the conclusion that, though installing large scale wind turbines is not feasible for the studied site; its solar potential would offset the wind’s shortfall. The result for solar energy radiation shows the potential of solar energy is sufficient for Zanjan likewise due to good wind speed in Zanjan area, can be say this city has a privilege in renewable energies.

Progress in renewable energy deployment is caused that utilization of fossil fuels reduced also from the environmental point of view in contrast to fossil fuels, renewable energy are in general pollution free which indeed it is essential factor for human life also there is an attempt to limit emission of carbon dioxide by using of renewable energy, actually the problems caused by fuel fossils is very harmful for mankind [1-3]. Renewable energy especially solar and wind energy technologies have seen much progress in different parts, Solar and wind energy can play a remarkable role as non-conventional resource in the world. About solar and wind energy applications many studies have been conducted related in different countries [4-6]. For example studied an assessment solar and wind energy in Bucaramanga, Colombia [7]. A review about renewable energy research progress in Mexico done [8]. A case study about empirical models for estimating global solar radiation have been done [9]. Technical and Economic Assessment of solar PV/diesel for Ethiopia country have been analyzed [10]. Determined the characteristics and potential of wind power for Kudat and Labuan located in Malaysia [11]. Presentation of Solar radiation model [12]. Wind energy potential of two sites in North-East, Nigeria considered [13]. Presented a study about solar radiation prediction by using of adaptive neurofuzzy approach in Nigeria [14]. Their results indicated which growing of the solar and wind energy is outstanding and has positive effects on our life also help us to having a better future, Meanwhile it was demonstrated that the growth of investment on the solar and wind energy will make a health space for our infants and other kind of members society [15]. Iran is one of the largest oil producers in the world and it was caused that approach usage of renewable energy be less than fuel fossils but [16]. Iran like developing countries has focus on renewable energy development [17].

Zanjan city is capital of zanjan province. It is located in north of Iran. This city is located at Coordinates 36°41′N and 48°29′E and at an altitude of 1,663 m meters above sea level. At the 2011 census its population was 386.851. Zanjan is a tourist city and also has a lot of historic places and historical attractions such as ancient market. The climate is cold in winter and autumn and moderate in spring and summer. 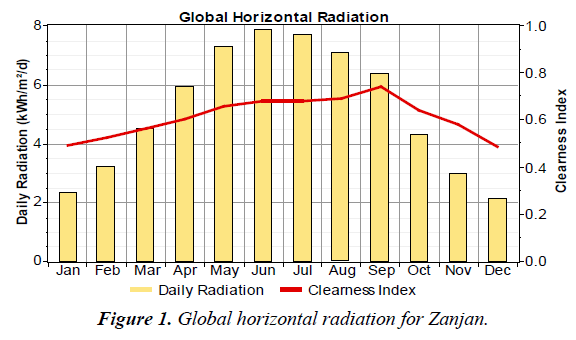 The monthly average electricity production by the photovoltaic collectors and generator 1 are each shown in Figure 2. In this figure the electrical power generation by the generator makes a significant contribution.

Table 2 Shows the Specifications of PV System by each household, the Rated capacity is 7 kW and Total production is 12,205 kWh/yr.

Figure 3 shows monthly average of Generator 1 Output that in this figure colors from black to red and unit age kW and respectively have been breakdown.

Table 4 shows Specifications of Battery System that each parameter in separation part has divided.

Figure 4 shows the battery bank state of charge for Zanjan city that battery has not been fully charged for the entire 24 hours of the day and sometimes has a fluctuation; Red color which is the graphical representation of battery performance in Figure 4 confirms this observation.

Table 5. Specifications of converter considered for each PV system.

Figure 5 summarizes the annualized cash flow for this system, broken down by component for PV-diesel battery-converter. The maximum cost after the generator cost is belong to the PV cost. 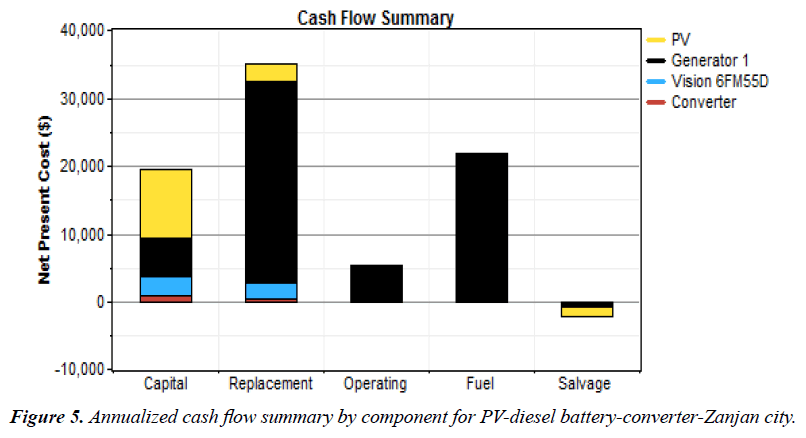 Table 6 shows detailed breakdown of the NPC for PV-diesel battery-converter hybrid system that in this table the highest and lowest total lifetime cost of the system is belonging to the generator and convertor, which have values of US$ 61,807 and US$ 1,188 respectively in addition this system exhibits a maximum in terms of cost of the system, which is US$ 79,624.

For analysis of wind energy in this system Homer software was used and all analysis presented in different tables and figures. Table 7 shows the specifications of wind System architecture that for this system 2 Generic 3 kW, a generator 7 kW and 24 Vision 6FM55D were selected.

In this system Fraction for Wind turbines 4%, Generator 1, 96 % and DC primary load 100% obtained also Figure 5 shows Monthly Average Electric Production breakdown wind-diesel. The monthly average electricity production by the wind turbine and generator 1 are each shown in Figure 7. The electrical power generation by the generator is obviously in this figure.

Table 11 indicates Specifications of Generator System for wind energy of this considered system that String size, Strings in parallel, Bus voltage, Nominal capacity, Losses and Annual throughput have been shown.

Figure 8 shows the battery bank state of charge for Zanjan city and it is obvious that battery has been fully charged for the entire 24 hours of the day.

Specifications of converter considered for wind system has been shown in Table 12 and is including Capacity, Mean output, Capacity Factor, Maximum and Minimum output.

Table 12. Specifications of converter considered for each PV system.

Figure 9 shows summarizes the annualized cash flow for this system, broken down by component for Wind-diesel -battery-converter that as PV-diesel battery-converter system the maximum cost is belong to the generator cost and then vision 6FM55D has maximum cost. Also in this study total net present cost 98,275$, levelized cost energy 0.248 $/kWh and operating cost 6,636 $/yr obtained.

Table 13 shows detailed breakdown of the NPC for Wind-diesel battery-converter hybrid system the highest and lowest total lifetime cost of the system is belonging to the generator and convertor, which have values of US$ 85,756 and US$ 1,188, respectively also this system present a maximum in terms of cost of the system, which is US$ 98,275.

Table 13. Detailed breakdown of the NPC for wind-diesel-battery-converter hybrid system.

At present, energy is the main factor of growth activities and different production sin side by side of world, likewise in recent years, there has been an increasing amount of literature on renewable energy systems that about it can say that. It was proved that given the limited sources of fossil fuels energy storage than past decreased and demands increased also many causes such as citied development and different industrials have led to an increasing demand for energy, then Moreover enough energy lack in future is main cause of changing people attitude for rising renewable energy using in the world. In this study potential of wind and solar energy for Zanjan area in Iran analyzed and considered. The Results showed Zanjan city in solar and wind energy has a pretty potential and can providing require of people energy for their home likewise due to having high potential investment of it has economic justification.

1. Creating a regular program long term to reduce of global warming by more use of renewable energy instead of fuel fossils.

2. More public training and encourage people to get absorbing to clean energy program for future.

4. Support of everybody that use of renewable energy as power energy to its house.