Impairment of in vitro embryonic development with a corresponding ele-vation of oxidative stress following nicotine treatment in mice: Effect of variation in treatment duration

This study was designed to investigate the effects of nicotine on in vitro embryo development at a variable duration of treatment schedule. A concomitant oxidative stress level was also evaluated. Four- to six-week-old female mice (Mus musculus) were injected (s.c.) with nico-tine (5.0 mg/kg/day) for 7, 14 or 28 consecutive days. Animals were superovulated and co-habitated overnight with fertile male at a ratio 1:1. Forty-eight hours post-coitum, blood samples of the animals were collected for manoldialdehyde (MDA) estimation. On sacrifice, ovaries including the fallopian tubes were excised. Fallopian tubes were flushed and the normal embryos were subjected to in vitro culture. Out of 783 retrieved embryos, only 61% were found normal. Nicotine increased the number of abnormal embryos (61.7 ± 9.3) as compared to controls (40.3 ± 8.1). None of the embryos formed blastocyst following nicotine treatment for 7 days. When the length of treatment was extended for 14 days, embryonic development reached only up to 8-cell stage. However, most of the embryos stopped dividing at 2-cell stage after 28 days of nicotine treatment. Plasma MDA concentration was found to be higher in all the three groups of nicotine-treated experimental mice compared to control groups. Ovarian MDA levels showed a significant difference between the groups of animals treated with nicotine for 14 days and 28 days, but not between two other treated groups, those received nicotine for 7 days and 14 days, respectively. In conclusion, the degree of im-paired development of the preimplanted embryos seems to be directly correlated with the length of nicotine treatment with a corresponding increment of oxidative stress.

The adverse effects of smoking on reproduction are well documented, yet the current trend of tobacco smoking among the women still remains. Approximately 4% of Malaysian population aged ≥15 years are female smokers (WHO Policy, Strategy Advisory Committee for Tobacco Free Initiative Estimated, 2000). Previous epidemiologi-cal studies from the general population of reproductive age have confirmed that there is a delay in conception [1] and the onset of menopause in female smokers [2]. There-fore, certain components in cigarette smoke may directly or indirectly interfere with embryo development and vi-ability.

Nicotine is present in cigarettes in amounts varying from 0.8 to 1.8 mg per cigarette depending on the brand and size of cigarette [3,4]. As much as 1 mg of nicotine is recorded to be absorbed by smoking a single cigarette [5].

Nicotine is a toxic alkaloid and is quickly absorbed through the respiratory track, mucosa of the mouth and skin [6]. Nicotine also induces oxidative stress through the production of free radicals [7] with an alteration of antioxidant enzymes in various tissues including heart, liver and ovaries as well as blood plasma [7]. This altera-tion of antioxidant enzymes is reflected by an increased level of MDA, an oxidative stress biomarker [8]. It has been reported that various tissues of mice exposed to side-stream cigarette smoke show elevated oxidative DNA damage [9] with a concurrent increase in lipid peroxida-tion and decreased level of antioxidant enzymes [10]. Fur-thermore, increased lipid peroxidation in blood of smok-ers has also been shown to be linked with oxidative dam-age on DNA with carcinogenesis [11]. It seems that peo-ple who smoke or exposed to cigarette smoke are also subjected to nicotine-induced oxidative stress [12]. A number of studies have shown that nicotine delays em-bryo cleavage from 2- to 4-cell stage and results in delayed implantation and prolonged gestation [13,14]. Nico-tine also affects the structure of the oviduct for transport-ing a gamete to the uterus for implantation [15]. Further-more, perturbation of the first and second meiotic divi-sions of the hamster oocyte following nicotine treatment has also been documented [16]. Nicotine, moreover causes a high percentage of pregnancy wastage and re-duces litter size during parturition [14]. Other findings have shown that nicotine delays or decreases LH and prolactin secretion [17].

Forty-eight mice with an average body weight between 25 - 30 gm were housed at 27 °C with 12 h light-dark cycle. Animals were given food pellets and water ad libitum and randomly divided into six groups. Animals of groups 1, 2 and 3 received daily subcutaneous (s.c.) injection of nicotine (5 mg/kg/day) [ICN, USA] for 7, 14 and 28 days, respectively. Animals of groups 4, 5 and 6, which were treated as controls, had 0.9% saline (s.c.) for 7, 14 and 28 consecutive days. On the last day of treatment, animals were superovulated using PMSG (150 IU/kg b.w.) fol-lowed by hCG (75 IU/kg b.w.), mated with the fertile males and sacrificed 48 hours post-coitum.

Blood samples were collected via cardiac puncture. Plasma was separated by centrifugation (2500 rpm, 4°C for 15 minutes) and frozen at -70°C until MDA analysis. Ovaries were freed from the adhering tissues and stored in 1 ml of phosphate buffered saline (PBS) and kept at -70°C until MDA analysis. Fallopian tubes were excised and embryos were flushed under a dissecting microscope (Leica Zoom 2000, Japan) and counted.

Normal and abnormal embryos were categorized accord-ing to the criteria set by Ertzeid & Storeng [18]. Only normal embryos were cultured. The embryos were cul-tured in a 35-mm culture dish filled with 100 μl droplets of Whitten’s medium (Sigma Chemical Co., USA) over-laid with mineral oil (Sigma, USA). The cultures were maintained in a humidified atmosphere containing 5% CO2 and 95% air at 37° C for 5 days. Assessment of em-bryonic development was made under the reverse phase (Leica IRB, Japan), and inverted microscope (Olympus 1X81 SF-3, Japan).

Determination of oxidative stress biomarker, MDA in plasma and ovaries

Plasma and ovaries were processed accordingly for evaluation of MDA levels using the theobarbituric acid reactive substances (TBARS) method [19]. The absorb-ance was measured photometrically at 632 nm and the concentrations were expressed as nanomoles MDA per gram protein (nmol/g).

Effect of nicotine on in vitro embryo development

Table 1 shows the effect of nicotine on the rate of in vitro embryo development in nicotine-treated mice. Embryos from the control groups 4, 5 and 6 developed up to a hatched blastocyst stage on day 5. Following 7 days of nicotine treatment (Group 1), the embryos developed until the stage of morula (23.7%) but none of the embryos hatched. Embryos grew up to 8-cell stage only (12.7%) following 14 days of nicotine treatment (Group 2), while in the 28-day nicotine-treated group (Group 3), embryo development ceased at 2-cell stage (100%).

Table 1: Relationship between the duration of nicotine treatment and number of the Embryonic cells developed (in vitro culture). 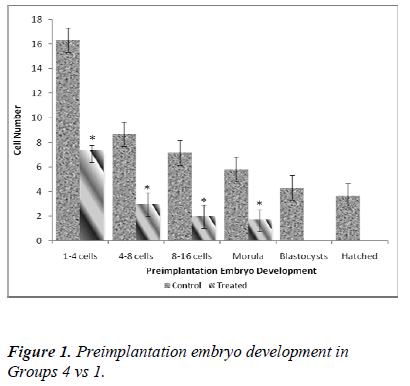 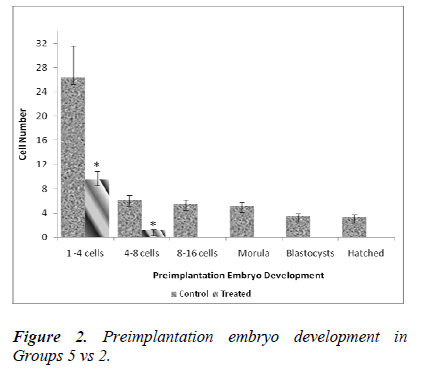 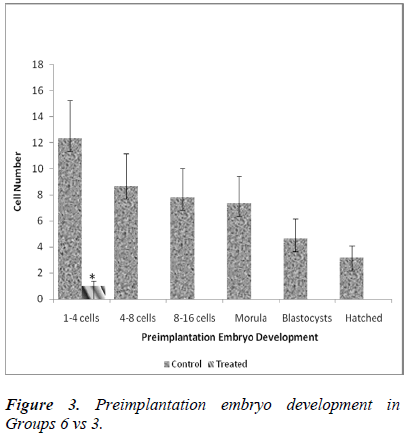 Nicotine treatment and MDA concentration in plasma and the ovary

Table 2 shows MDA levels in plasma and the ovary in mice at different treatment schedule with nicotine. In all the nicotine-treated groups, levels of plasma MDA were found to be significantly higher as compared to their re-spective controls. 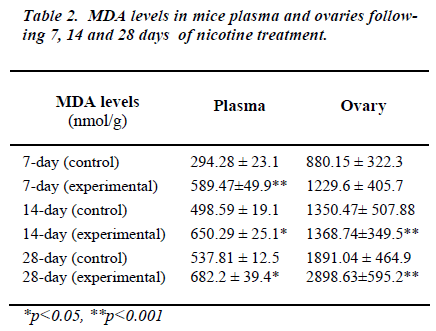 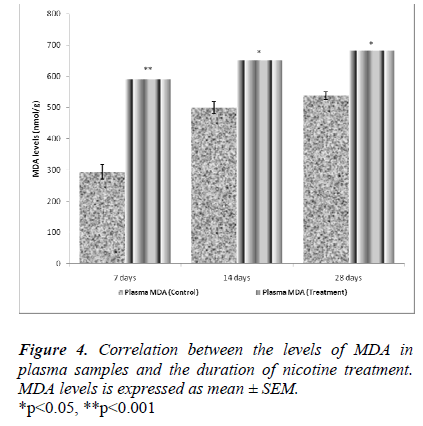 Figure 4: Correlation between the levels of MDA in plasma samples and the duration of nicotine treatment. MDA levels is expressed as mean ± SEM. 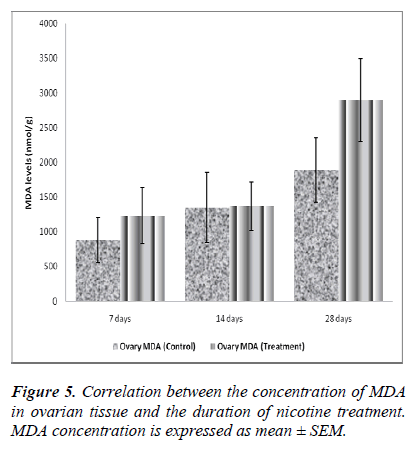 Figure 5: Correlation between the concentration of MDA in ovarian tissue and the duration of nicotine treatment. MDA concentration is expressed as mean ± SEM.

Although a significant increase in ovarian MDA was re-corded in between the groups treated for 14 and 28 days, yet plasma MDA levels between these two groups did not differ. Although nicotine altered plasma and the ovarian MDA concentrations, yet its effects on the ovarian MDA level was found to be much more pronounced.

In 1985 Mitchell and Hammer [20] reported that nicotine of 5.0 mg/kg body weight in rats for 4 consecutive days produced less number of blastocyst as compared to the control. The same dosage of nicotine was used for ultra-structure studies [21,22] and pregnancy at term [15]. We were, therefore tempted to examine and compare whether 5.0 mg/kg/day of nicotine for a period of 7, 14 or 28 days could alter in vitro development of embryo until the stage of blastocyst hatching. Our results of delayed embryonic cleavage from 1- to 4-cell stage on day 2 of pregnancy confirmed the findings of other researchers [14,15,20]. Effects of chronic treatment of nicotine for consecutive 30 days on preimplantation embryo development have been documented [21,23]. Norfilza et al [21] have recorded widened previtelline space and highly densed mitochon-dria in mice embryos following a chronic nicotine (5.0 mg/kg/day) treatment for 30 days. Another study has shown that twice-daily injections of nicotine (5.0 mg/kg/day) from day 1 through day 5 of pregnancy re-duced oviducal blood flow and the rate of embryo cell proliferation [20]. Using nicotine at a dose of 5.0 mg/kg/day for 7, 14 or 28 days, it was found that nicotine for 7 consecutive days prevented embryos to develop be-yond the stage of morula. However, embryos in 14-day treatment group did develop up to 8-cell stage only, while nicotine for 28 consecutive days ceased embryo develop-ment at 2-cell stage.

Our results therefore indicate that prolonged exposure of nicotine has a greater negative impact on in vitro embryo development. It has been reported that embryos in rats developed only up to a 4-cell stage when nicotine treat-ment is continued for 30 days [21]. An identical treatment schedule in mice is found to prevent blastocysts formation on day 4 in culture (Rozzana et al [23]). Nicotine expo-sure (5.0 mg/kg/day) in rat for four consecutive days however, resulted in a less number of blastocyst as com-pared to control [20] and only 33% of pregnancy in rats evidently continued until term [14].

In present study, we retrieved 783 embryos of which only 61% were found normal. However, more than half of the retrieved embryos (60.5%) from the nicotine-treated mice were found to be abnormal. The decline in the number of retrieved oocytes has previously been reported [24,25].

Nicotine-induced pregnancy complications such as spon-taneous abortion, low birth weight and delayed concep-tion are also evident [22,23]. Nicotine-related formation of reactive oxygen species (ROS) such as superoxide an-ion (O2¯), hydrogen peroxide (H2O2) and free radical (OH¯) [26,27] causes pro-oxidants to outnumber antioxi-dants [7], and results in oxidative stress. Free radicals are found in ovarian lutein cells [28], follicular fluid [29], and around the blastocyst [21]. It has been demonstrated that oxidative stress induces mitochondrial and cellular DNA damage [30,31] and promotes in vitro ageing [32]. In-creased concentration of plasma and ovarian MDA fol-lowing nicotine treatment for 7, 14 or 28 days is a consis-tent proof of the generation of oxidative stress in our ex-perimental animals. Moreover, decrease in ovarian perfu-sion by nicotine [23] could possibly cause a significant increase in MDA concentration in the ovarian tissue par-ticularly following 14 or 28 days of nicotine treatment. Increased MDA levels in blood/serum of smokers [11] and an increase in cotinine concentration in follicular mi-croenvironment are also evident [33].

In conclusion, the degree of nicotine-induced in vitro em-bryo dysgenesis seems to be correlated with the duration of nicotine exposure. Moreover, corresponding increase in plasma and ovarian levels of MDA, an indicator of oxida-tive stress also suggests that the impaired embryogenesis is possibly caused by nicotine-related generation of free radicals.

This work was funded by the Fundamental Research Grant Scheme (FRGS) No 600-IRDC/ST/FRGS.5/3/1343 to Professor Dr Mohd. Hamim Rajikin.