What promotes malignancy in human cancers? A many times asked and never answered issue. Many authors have suggested oncogenic proteins, such as transforming growth factor β (TGF-β), TGF-β agonists and TGF-β antagonists.

As proposed in this article, cancer hyperglycosylated hCG is the most promising human cancer malignancy promoter. Hyperglycosylated hCG was discovered by me in 1997 [14]. It is a second form of hCG, a TGF-β antagonist, yet a completely independent and separate molecule to the hormone hCG.

It shares an identical α-subunit and β-subunit amino acid sequence with hCG, and only differs from hCG by having three or four type 2 O-linked oligosaccharides on the hCG β-subunit C-terminal peptide, hexasexaccharides and pentasaccharide verses three of four sugar type 1, trisaccharide and tetrasaccharadide structures found on the hormone hCG (Figure 1). 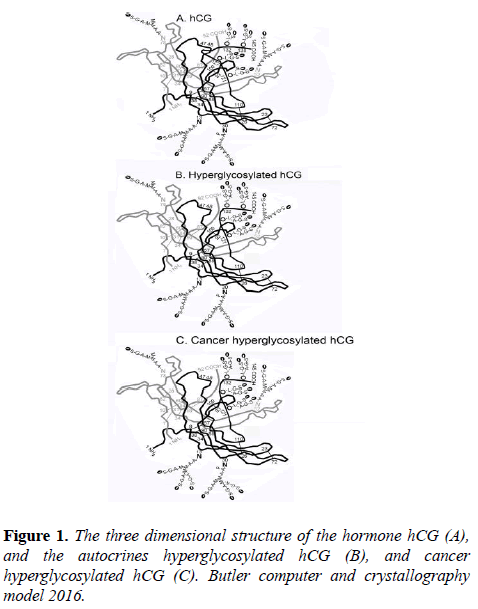 Hyperglycosylated hCG is made by invasive cytotrophoblast cells during pregnancy, while the hormone hCG is made by fused syncytiotrophoblast cells during pregnancy [19,20]. Hyperglycosylated hCG acts on the autocrine cytotrophoblast cell TGF-β-II receptor driving implantation of the blastocyst in the beginning of pregnancy [20,21], and deep implantation of hemochorial placentation at 10 weeks gestation [22,23], and during the menstrual cycle finalizes ovulation [24]. In all three processes, the autocrine TGF-β-II receptor drives invasive metalloproteinase and collagenase production [12,19], cell growth [19,25] and blocks cell apoptosis [26-28], three malignancy-like steps.

Under medical dictionary definition, malignancy is the “process of cancer advancement, cancer growth, and cancer tissue invasion.” In the Merriam-Webster dictionary malignancy, it is defined as “aggressively malicious, tending to produce death or deterioration, tending to infiltrate, metastasize, and terminate fatally.”

As interpreted in this article, malignancy means the process of cancer advancement, cancer growth promotion, and cancer tissue invasion. We test hyperglycosylated hCG and its free β- subunit for these malignancy properties, and how a malignancy promoter absolutely differentiates cancers and benign diseases.

The ability of trophoblastic cancers to produce hyperglycosylated hCG was confirmed and non-trophoblastic cancers produce hyperglycosylated hCG free β-subunit. Then show that both the molecules produced by cancers have malignancy properties. Finally, the occurrence of these tumor agents was examined to show that 100% of cancers produce these malignancy agents.

Serum samples, 959, and urine samples 2257 were collected from men and women attending the oncology, thoracic oncology and gynecologic oncology clinics at Yale New- Haven Hospital in New Haven CT. Samples collection was started in 1992, multiple tubes of serum and urine were libraried in -80 C Revco freezers with the certification of Yale Clinical Research Internal Review Board seeking full patient approval. Additionally, 283 urine samples from women and men with benign disease were collected at Yale New Haven Hospital Oncology clinics and 154 serum and urine samples were at Oncology clinic from healthy and treated individuals.

In the experiment the cells were cultured in flasks 3-5 days in quadruplicate until they reach approximately 70% flask confidence. Then medium was changed and replaced with medium containing 0 ng/ml, 20 ng/ml and 200 ng/ml hyperglycosylated hCG (JAr, JEG-3 and NTERA cell lines), or 0 ng/ml, 20 ng/ml and 200 ng/ml hyperglycosylated hCG free β-subunit (T24, KLE, CaSki, ScaBER, Hec-1-a, SK-MES-1 and KM-H2 cell lines). Cells were cultured for 24 h and the cell number determined in each flask using a hemocytometer.

Zero time culture cells were plated onto Matrigel membranes and control inserts (Biocoat Matrigel invasion membranes, BD Biosciences, Bedford, MA 01730), and cultured at 37ºC for 24 h in Dulbecco’s modified Eagle’s medium with 10% fetal bovine serum in quadruplicate. Matrigel membranes were processed and percentage invasion calculated. Briefly, membranes were rehydrated in the incubator for 2 h before use. Membranes and control inserts were then plated (25,000 cells in 0.5 medium per plate).

Plates were cultured for 24 h, and membranes removed from inserts using a scalpel. Membranes were transferred to a slide using Cytoseal mounting medium (Stephens Scientific Inc., Riverdale NJ), exposing the under surface and invaded cells. Cells were stained with DIF-Quick Stain (IMEB Inc., Chicago IL) to mark nuclei. Invaded cells were counted at 9 marked positions and were averaged for each insert. Cell penetration or invasion of membranes is directly compared to that of correspondingly cultured control inserts and percentage invasion calculated using the formula provided by the manufacturer.

1. What do cancer cells secrete?

The freezers were searched for stored cancer patient serum and used for tumor marker studies and found 32 trophoblastic cancer (choriocarcinoma, ovarian germ cell and testicular germ cell cancers) serum samples and 92 non-trophoblastic cancer serum samples. All were tested for total hCG in the Siemens Immulite assay, for hyperglycosylated hCG and hyperglycosylated hCG β-subunit in the B152 assay, and for free β-subunit verses α-β- dimer using the FBT11 assay (Table 1).

Table 1. What is produced by cancer cells?

The malignancy properties of hyperglycosylated hCG and it free β-subunit were investigated by Cole LA. Multiple cancer cell lines were cultured on top of a Matrigel (Corning, Corning NY) basement membrane and the extent of penetration of the membrane by the cells determined. A wide variety of cancers was investigated (Table 3), ranging from choriocarcinoma cells to testicular germ cell malignancy cells, to cervical endometriod cancer cells, to lung epithelial cancer cells to Hodgkin lymphoma cancer cells. In each cell line control cells with no additive placed in medium (cells produce hyperglycosylated hCG or its free β-subunit naturally) were compared to cells with 100 ng/ml additive (Table 3).

Table 3. Promotion of cancer cell 24 h growth at 70% confluency by C5 hyperglycosylated hCG and its β-subunit.

As found, 100% of trophoblastic cancer case were detected in serum and urine (Table 4). In contrast, an average of 30% of non-trophoblastic cancer cases were detected in serum, and 44% of cases in urine samples. The higher detection in urine may be due to the rapid blood clearance of hyperglycosylated hCG free β-subunit and its degradation products.

Detection of non-trophoblastic cancers varied greatly according to cancer site. In serum, detection ranged from 17% with colorectal cancers to 38% with ovarian cancers. In urine, using the B204 assay, detection ranged from 34% with breast cancers to 70% with ovarian malignancies (Table 4). Questions have been raised on why 34% to 70% and not 100%, since 100% of cancers show malignancy?

To address this issue 56 new non-treated ovarian cancer cases were tested providing urine samples with the B204 assay. The current assay used has a sensitivity of 1.4 fmol/ml, and the cut off in the tumor marker assay of 3.0 fmol/ml. A significantly more sensitive assay was developed by 10-fold reducing the plating concentration of B204 antibody, and by extending the first incubation time from 2 h to 6 h. The new super-sensitive assay detected down to 0.08 fmol/ml, and has a tumor marker cut-off of 0.10 fmol/ml. This assay was used to test the 56 ovarian cancer urines Table 5.

In support of the concept that all cancers produced simple and complex autocrines, Acevedo et al. [45-47] used flow cytometry to sensitively examine membrane-associated hCGrelated molecules produced by cancer cells. Each showed and confirmed, as indicated in Table 5 that 100% of cancer cells produced the tumor markers. It was concluded that in reality 100% of all cancer produce hyperglycosylated hCG and its free β-subunit.

If hyperglycosylated hCG and its free β-subunit control cancer cell malignancy, then these molecules should not be expressed in benign diseases. 284 urines from women with a wide variety of benign diseases were tested, using the B204 3.0 fmol/ml cutoff assay (Table 4). None of the 284 benign disease urines contained B204 reactive materials.