Growing teratoma syndrome (GTS) is a rare disease occurring in patients with non-seminomatous germ cell tumors (NSGCT), which is characterized by enlarging masses in the presence of normal tumor markers either during or after completion of chemotherapy. The disease is chemo-resistant and radio-resistant and complete surgical removal offers the best chance of long-term survival. GTS was first described by Logothetis et al. in 1982, who designated criteria to diagnose this rare entity [1]. The fact that GTS is not common leads to delays in diagnosis and surgical intervention. This case report refers to a testicular growing teratoma with its first clinical manifestation being a gigantic forearm mass.

A 34-year-old man, with a history of cryptorchidism, presented with a progressively enlarging ulcerated lesion on the left forearm (Figure 1) and abdominal pain. Initially, a biopsy was performed by an Orthopedist. While waiting for the biopsy results, the abdominal pain was intensified and the patient was admitted to the hospital. Clinical examination revealed a palpable left testicular mass and palpable liver in addition to the left forearm lesion. The main laboratory findings included raised AFP (538 ng/ml), β-HCG (87 mIU/ml), LDH (1166 IU/L). Thoracic and abdominal computed tomographies showed a giant cystic tumor on the left of the abdomen and lung as well as liver metastases. Brain MRI was negative for abnormal findings. 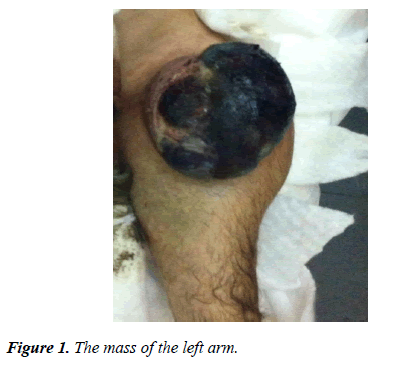 Figure 1: The mass of the left arm.

Due to clinical deterioration with aggravation of the abdominal pain, the patient was submitted to an urgent laparotomy which proved a small bowel rupture. A bowel resection was carried out concurrently with removal of the cystic mass and hepatectomy, albeit suboptimally. Consequently, a left inguinal orchiectomy was performed. 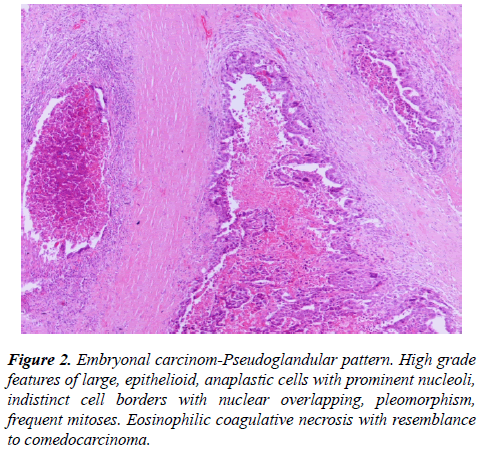 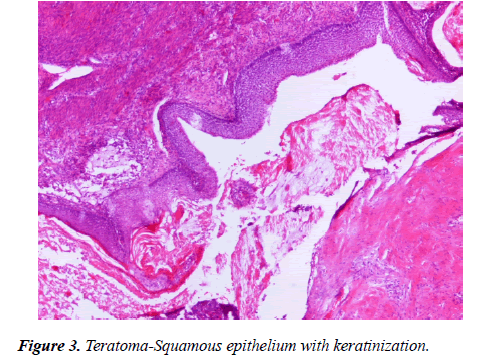 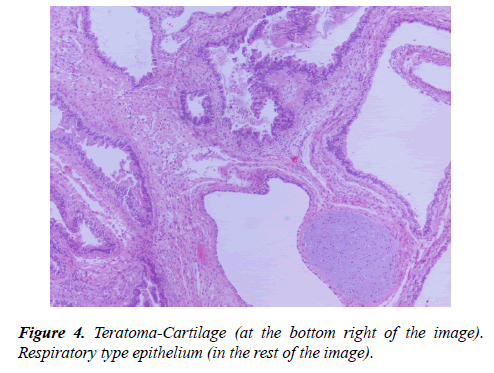 Post-operatively the patient received two cycles of bleomycin/ etoposide/cisplatin (BEP) without adverse events, but unfortunately with clinical worsening. Repeated thoracic and abdominal computed tomographies exhibited progression of the cystic mass and liver lesions (Figure 5), regression of lung lesions, while tumor markers had already been normalized. Thus, an abdominal growing teratoma syndrome was suspected and a surgical debulking was pursued. A gross bleeding of the left forearm ensued during hospitalization, leading the patient to an amputation. Unfortunately, a wound dehiscence was noticed and a new surgical intervention was conducted. A few days later, the patient died due to a nosocomial infection. 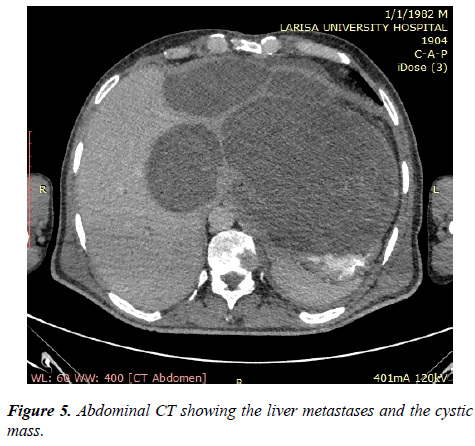 GTS, a disease characterized by the presence of progressively enlarging masses during or after chemotherapy with normalized tumor markers, is an infrequent scenario (1.9-7.6 %). The exact etiology is still unclear. The most common hypothesis has been advocated by André et al., who suggested that chemotherapy may selectively eradicate the more anaplastic components and prolong the course of the disease, allowing benign components to grow further [1,2]. On pathological examination, GTS consists of both solid and cystic elements, and may contain sebaceous secretions, teeth, nails, hair follicles, cartilage, respiratory epithelium, which are features of mature teratomas [3].

Diagnosis of GTS remains a significant challenge, because of the rarity of the disease. However, an early diagnosis can protect patients from expensive investigations, chemotherapy-induced toxicity or extensive surgery. Diagnostic criteria established by Logothetis are: (1) normalization of serum tumor markers, (2) increasing size of lesions on serial imaging either during or after completion of chemotherapy and (3) exclusive presence of mature teratoma components in resected specimen in a patient with a known history of NSGCT.

The condition is well described in both testicular and ovarian germ cell neoplasms, but males are at increased risk of GTS as compared to females [4]. The syndrome can present at any time during or after therapeutic regimen, with early reports after two cycles of chemotherapy and late reports of occurrence such as 12 years after chemotherapy accomplishment [5]. Occurrences are usually encountered within 24 months after maximal chemotherapy [6]. Several organ sites can be involved, like lung, mediastinum, lymph nodes, mesentery and liver [7], but the retroperitoneum is the most common site. GTS can be biologically aggressive, encasing blood vessels and other vital structures and leading to vascular thrombosis, ureteral/bowel obstruction or colonic fistula.

No specific radiological feature or any growth size/rate has been associated with GTS. However, certain characteristics as increased cystic changes, punctuate or curvilinear calcifications and clearly circumscribed margins are common in such patients [8].

Contrary to NSGCT which is a highly chemo-sensitive disease, GTS does not respond to systemic therapies. Surgical excision remains the cornerstone of treatment. Surgical exploration should be employed as early as possible, aiming to achieve complete removal of teratoma masses, avoiding morbidity and reducing the risk of dedifferentiation of mature teratoma into immature germ cell tumor [9]. Recurrence rates for incomplete and complete resection are 72%-83% and 0%-4% respectively [10].

Completely resected GTS has an auspicious prognosis, with 5- year survival rates of 90%. The remaining 10% mortality rate is attributed to post-operative complications and development of secondary cancers. Approximately 3%-5% of GTS lesions undergo transformation to adenocarcinoma, squamous cell carcinoma, sarcoma and neuroendocrine tumors. Reemergence can be detected even several years after the initial resection, hence patients should be followed up to 10 years.

Although GTS is a rare clinical entity, it should be suspected in patients with NSGCT who develop progressively increasing size of lesions during or after chemotherapy, in the context of normal serum markers. An optimal cytoreduction without residual disease is associated with a favorable prognosis, whereas regular follow-up is mandatory. Clinicians should retain a high index of suspicion for GTS, because early recognition and surgical intervention diminish complications associated with increased tumor mass, peri-operative morbidity and future risk of malignant transformation.

A written informed consent was obtained by the patient for publication of this case report and any accompanying images. The authors have no conflicts of interest to declare.