Glandular odontogenic cyst of the anterior maxilla in a 13-year old male: a rare case of location and age.

1Oral and Maxillofacial Radiology, Texas A and M College of Dentistry, TX 75246, USA

The Glandular Odontogenic Cyst (GOC) was first described by Gardner in 1988 and recognized as a distinct entity by the World Health Organization in 1992. Padayachee and Van Wyk in 1987 described a cyst with histological features similar to the botryoid odontogenic cyst and a mucoepidermoid tumor and termed it “sialo-odontogenic cyst”. The GOC comprises 0.012- 1.3% of all jaw cysts. It most commonly occurs in the 4th decade and rarely occurs in persons under twenty years of age. The mandible is the most common site with approximately 75% of the reported cases. The significance of this paper is in reporting the combination of two rare characteristics of location and age in one patient.

The Glandular Odontogenic Cyst (GOC) is a rare developmental odontogenic cyst that occurs 75% of the time in the mandible and rarely presents in persons under 20 years of age [1]. The GOC was originally described by Padayachee and Van Wyk [2] in 1987 who reported on two cases of multilocular mandibular cysts with features of both Botryoid Odontogenic Cyst (BOC)and central mucoepidermoid tumor (mucoepidermoid carcinoma or MEC). They concluded that these lesions differed from a BOC and MEC and warranted a separate classification, which they termed sialo-odontogenic cyst. Gardner et al. [3] described eight cases with similar histological features and coined the name glandular odontogenic cyst to emphasize the odontogenic derivation of this cyst. The glandular odontogenic cyst or sialo-odontogenic cyst was included as a distinct entity as a developmental odontogenic cyst in the 1992 WHO’s Histological Typing of Odontogenic Tumors [4]. It was defined as “a cyst arising in the tooth-bearing areas of the jaws and characterized by an epithelial lining with cuboidal or columnar cells both at the surface and lining crypts or cyst-like spaces within the thickness of the epithelium”. GOCs should be distinguished from other odontogenic cysts because: (1) They can recur more often than dentigerous or radicular cysts; and (2) Their histologic appearance can overlap with the lateral periodontal cyst, botryoid odontogenic cyst and central mucoepidermoid carcinoma [5]. Since the GOC is a relatively recently described entity, there is not much information in the literature regarding the clinicopathological features of GOC’s, or their occurrence in the maxilla and in a young age group. This paper describes a rare case of 13-year-old male with a GOC of the anterior maxilla.

A 13-year-old male was referred by an orthodontist to an oral surgeon for evaluation of impacted teeth #10 and #11 and a mesiodens. A panoramic and occlusal radiograph revealed a well-circumscribed unilocular radiolucency associated with the crown of an impacted left maxillary canine. The border of the lesion was corticated and originated from approximately the cemento-enamel junction of the impacted canine. It extended superoinferiorly from the nasal fossa floor to the maxillary alveolar ridge. In the mesiodistal direction, the lesion extended from the mesial aspect of the root of the right maxillary central incisor to the mesial aspect of the root of the left maxillary 1st premolar. In the anteroposterior dimension, the lesion extended from the facial cortical plate of the maxilla to the anterior border of the inferior turbinate. The lesion displaced the roots of the left maxillary central and lateral incisors distally. No root resorption or cortical bone expansion was noted (Figures 1 and 2). The differential diagnosis included dentigerous cyst, Odontogenic Keratocyst (OKC), and, given the patient age/ location/association with an impacted canine, an Adenomatoid Odontogenic Tumor (AOT). With a presumed diagnosis of a dentigerous cyst, the original treatment plan consisted of enucleation of the cyst, extraction of the mesiodens and orthodontic assisted eruption of left maxillary lateral incisor and canine. Eventually it was determined that the teeth could not be brought in orthodontically due to their high horizontal position and location between the roots of the bicuspids. The teeth were therefore extracted. At the time of surgery, the large size of the lesion and bony erosion suggested that the lesion could possibly be an OKC, and was treated by enucleation along with Carnoy's solution. Post-surgery, the tissue was sent to the hospital surgical pathology department with a tentative diagnosis of a dentigerous cyst. The histological examination showed a cystic structure surfaced predominantly by a thin layer of epithelium with focal plaque-like thickenings. In areas, the luminal surface of the epithelium demonstrated a layer of columnar cells and glandular structures (Figures 3-5). The histological findings were consistent with a diagnosis of glandular odontogenic cyst. At present, no other treatment is planned for this patient. The follow-up plan is re-evaluation every three months with a new radiograph at six months and at one year. After three years the patient will be followed every six months. 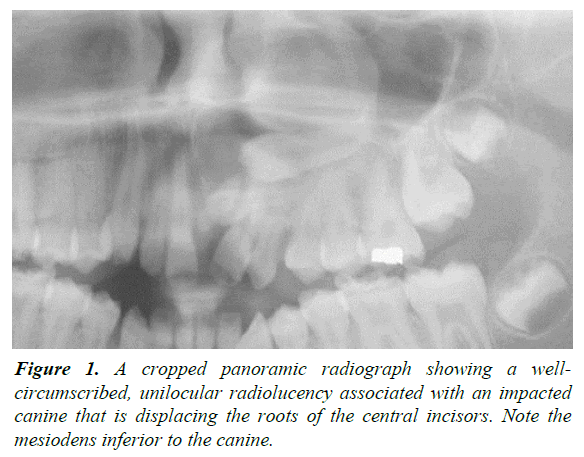 Figure 1. A cropped panoramic radiograph showing a well circumscribed, unilocular radiolucency associated with an impacted canine that is displacing the roots of the central incisors. Note the mesiodens inferior to the canine. 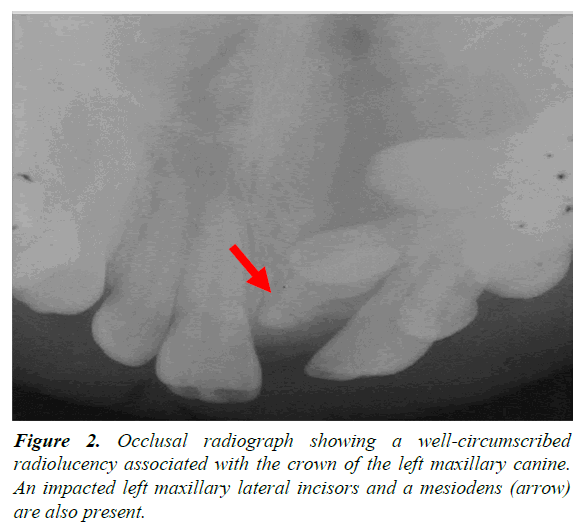 Figure 2. Occlusal radiograph showing a well-circumscribed radiolucency associated with the crown of the left maxillary canine. An impacted left maxillary lateral incisors and a mesiodens (arrow) are also present. 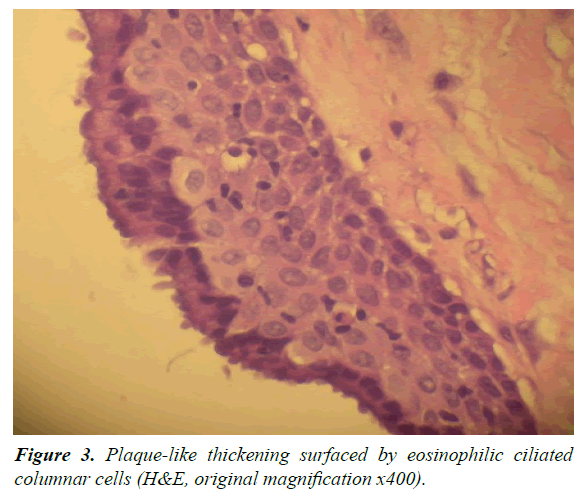 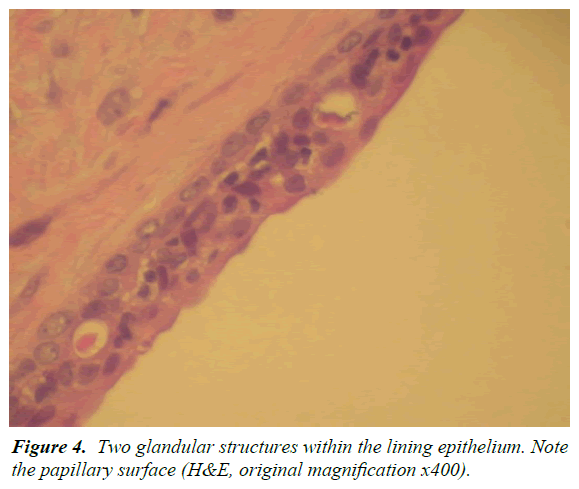 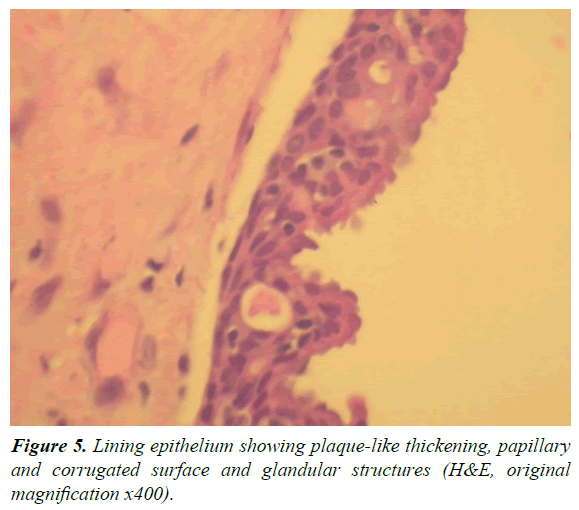 A dentigerous cyst was the most likely lesion to fit the radiographic findings. The odontogenic keratocyst and adenomatoid odontogenic tumor both meet the criteria and either could arguably be considered more likely. The glandular odontogenic cyst would not be considered in the differential as the patient’s age, the site of the lesion, and the lack of GOCs being associated with the crown of an unerupted tooth would preclude this diagnosis.

The glandular odontogenic cyst is a rare entity that was first described by Gardner [3] in 1988 and was recognized as a distinct entity by the World Health Organization in 1992. The characteristic histological features are a cystic space lined by non-keratinized stratified epithelium surfaced by eosinophilic cuboidal or columnar cells. Occasionally these cells may be ciliated and the surface can have papillary projections. The lining can have plaque-like thickenings [5,13-15] similar to that seen in the Lateral Periodontal Cyst (LPC) or BOC. Within the lining epithelium are micro-cystic or glandular structures, as well as epithelial whorls or spheres [3], mucin pools and mucous cells. Although GOCs generally have mucous cells within the lining epithelium or lining the glandular spaces, their presence is not unique and can be seen in many intraosseous cysts and have been reported in 5-27% of odontogenic cysts. Clinically, it is most common in middle age adults with most reports having a mean age in the 4th decade and a few cases reporting it in the 5th decade. The age ranges from 11 to 90 years old. Males and females are affected equally; however males tend to be affected at a younger age then females. The GOC has a predilection for the anterior jaws with an affinity for the anterior mandible with as many as 75% of the cases reported there [1]. When in the mandible, it has a tendency to cross the midline and it has been reported to cross the midline in the maxilla [1,5,15-20]. Infrequently it is seen in the posterior jaws. Radiographically, the lesion presents either as a unilocular or multilocular radiolucency with well-defined margins and a sclerotic rim. The behaviour of GOCs are of an aggressive growth potential and a tendency to recur. Recurrence rates are 21-30% and have been reported as high as 55% with conservative treatment [13]. The GOC represents 0.012-1.3% of all jaw cysts, though it has been suggested that these numbers may be conservative, as cases of GOC could have been diagnosed as central MEC or LPC [13]. The treatment modalities range from conservative treatment: excision enucleation, curettage and meticulous follow-up [14-16] to aggressive treatment: marginal or enbloc resection. Aggressive treatment is recommended by some authors due to the aggressive growth and recurrence of these cysts. Histologically, GOC can be similar to LPC and BOC or MEC [1,5,13-21]. In certain focal microscopic fields, however, examining multiple fields should give the pathologist enough information to differentiate these entities. GOC, like LPC and BOC exhibit plaque-like thickenings but LPC and BOC lack glandular structures and ciliated epithelium, features found in GOC. A more difficult distinction is between a GOC and MEC, especially a cystic MEC. Both can have cystic spaces lined by epithelium containing mucous cells and gland-like structures [13,17]. The one feature not reported in MEC that can help in differentiating it from a GOC is plaque-like thickenings [17]. The present case is of a 13-year-old male with a GOC in the anterior maxilla. Though the anterior maxilla is the 2nd most common site affected, relative to the mandible it represents the minority of cases seen clinically with very few cases reported in the literature [5,14]. Glandular odontogenic cysts in young persons are rare. In a four global group systematic review, MacDonald-Jankowski [19] found no cases of GOC in the 0-9 year old group and the 10-19 year old group represented 10% of the total of all GOC. In a thirty year review of odontogenic cysts in the United Kingdom, Jones et al. [20] found no cases of GOC in the paediatric population. A literature search for GOC of the anterior maxilla in a young person produced no results. This paper adds to the small body of literature on GOC and a unique perspective on its presentation by reporting an extremely rare case (perhaps the first case) of GOC in the anterior maxilla of an adolescent male. 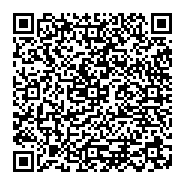