Prostate Cancer (PC) is one of the cancers with the highest incidence in males, and studies have shown that benign prostatic hyperplasia is an independent risk factor for PC [1]. Although the specific pathogenesis of PC has not been exactly understood yet, the over-expressions of proto-oncogenes and the mutations of tumor suppressor genes play important roles in PC [2]. PTEN was originally identified as a tumor suppressor frequently lost from a region of chromosome 10q23 in a variety of human tumors including those of the brain, breast and prostate [3]. PTEN gene is a tumor suppressor gene with bi-specific phosphatase activities, although the tumorsuppressor activity of PTEN depends largely on its lipid phosphatase activity, which opposes phosphatidylinositol 3- kinase (PI3K)/protein kinase B (AKT) activation, therefore inhibiting cell survival, growth, and proliferation, which was related with the intra-nuclear cycle regulation, at the meantime, it has also been reported that PTEN dephosphorylates focal adhesion kinase, leading to reduced cell migration and spreading in fibroblasts, so it has important tumor suppressing functions [4-6]. The p53 gene is the most widely studied tumor suppressor gene. It could be activated by various genotoxic and cellular stress signals, such as DNA damage, hypoxia, oncogene activation and nutrient deprivation [7]. Wild-type p53 mediates imperative functions such as regulation of the cell cycle and programmed cell death. The deficiency of p53 function by mutation or inactivation abrogates normal cell cycle checkpoints and apoptosis, generating a favourable milieu for genomic instability and carcinogenesis, but Muller et al. found that the gene has highest mutation rate [8,9]. There have been many studies confirmed that PTEN and p53 are abnormally expressed in prostate cancer tissue, but the expression correlations between these two genes were still absent [10,11]. Therefore, discussing the expressions and correlations of these two genes in PC will be important to increase our understanding of PC.

The specimens were all sampled from the 80 PC patients admitted in our hospital from Jan 2012 to Oct 2013, including 52 males and 28 females, aging 23-87 y old, with the mean age as 62.3 ± 14.0 y. This study was conducted in accordance with the declaration of Helsinki. This study was conducted with approval from the Ethics Committee of Jilin Province People’s Hospital. Written informed consent was obtained from all participants. The differentiation degrees were: 13 highly differentiated cases, 45 moderately differentiated cases, and 22 poorly differentiated cases; 46 cases occurred lymph node metastasis, and 34 cases did not; TNM stages: 5 cases in stage I, 12 cases in stage II, 34 cases in stage III, and 29 cases in stage IV. Inclusion criteria: (1) Met the histological diagnostic criteria of prostate cancer, World Health Organization (WHO); (2) Without genetic family history of PC; (3) Was not performed chemotherapy before the surgery. The PC tissue and adjacent tissue were collected from these 80 patients, and another 40 cases with normal prostate tissue were selected as the normal controls. 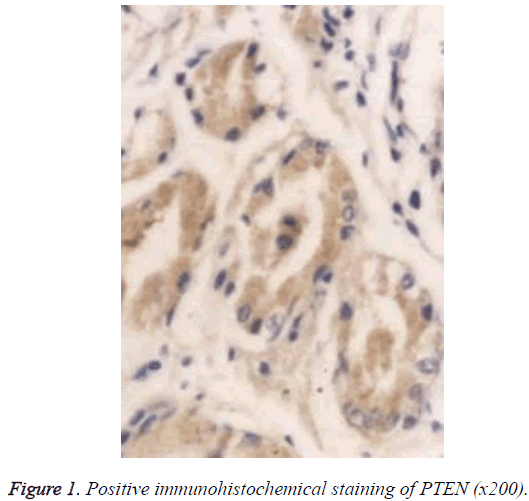 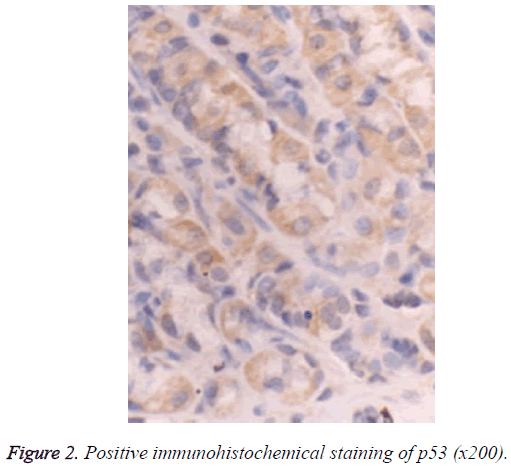 The follow-up used such ways as outpatient visit, telephone, email and mails, and the deadline was Sep 1st, 2015. The survival time, time and location of recurrence and metastasis and death reasons of the patients were recorded. The median follow-up time was 46 months (11-50 months), no patients were lost, and 68 patients are still alive currently.

SPSS20.0 software package was used for the data analysis and processing. The analysis among PTEN, p53, and PC causes used the x2 test, and the correlations between PTEN and p53 were analyzed using the Spearman test, with P<0.05 considered as statistically significant.

Expressions of PTEN and p53 in PC tissue

Table 1: Expressions of PTEN and p53 in PC tissue.

Correlations of PTEN and p53 with PC grading and pathological parameters

Table 2: Correlations of PTEN and p53 with PC grading and pathological parameters.

Correlation analysis between the expressions of PTEN and p53

Table 3: Correlation analysis between the expressions of PTEN and p53.

Like other cancers, the occurrence and development of PC is a complex multi-stage and multiple-gene-participation process, and the silencing and mutation of tumor suppressor genes are closely related to PC [10-13]. The P53 gene is located on the short arm of chromosome 17 (17q13), about 20kb, and its product is localized inside nuclei, and it’s the tumor suppressor gene with the highest mutation rate [14]. Therefore, research about the expression of p53 is mainly to detect the expression level of the mutant p53 protein product, and the higher positive rate, the higher protein expression level of mutant P53. PTEN is located in the short arm of chromosome 10 (10q23.3), about 200 kb, and due to its longer length, its encoding protein’s structures are more complex, so it has a variety of physiological functions, not only acting on nuclei so as to regulate the cell cycle but also acting on cell membrane so as to participate in the interactions and adhesion among cells [15]. It has been investigated the protein expression levels of p53, p16, and PTEN in PC, and found that they are related to the grading, staging, and metastasis of PC, but the relationships among these three genes were not studied [16]. It’s also been reported that the low expression of PTEN enhances the invasion and metastasis of PC, but it really does not affect the staging and grading of PC, and the patients with negative p53 exhibited significantly prolonged survival period and better treatment efficacies [17-20]. However, the above studies covered small sample sizes, and the correlations of PTEN and p53 with the pathological data of PC were not studied.

This study confirms that in PC tissue, p53 is significantly upregulated, but PTEN is significantly down-regulated, consistent with existing studies [15]. Further investigating the correlations of PTEN and p53 with such pathological parameters as classification and prognosis of PC reveals that PC tissue with various differentiation degrees and prognosis exhibits significantly different expression levels of p53. We believe that because p53 has the roles of regulating the cell cycle, but the mutated p53 protein loses this function, thus leading to the occurrence of PC; meanwhile, it also leads to the dedifferentiation of PC tissue. Therefore, PC tissue with poor differentiation exhibits the highest mutation rate of p53. Poorly differentiated PC tissue has poor prognosis, so the patients with shorter survival period also exhibit higher mutation rate of p53. PC tissue with various differentiation degrees, stages, metastasis, and prognosis exhibit significantly different expression levels of PTEN, indicating that PTEN participates in not only the differentiation and prognosis of PC but also the staging and metastasis, and it’s related to PTEM’s various physiological functions . Studies have shown that reducing the expression of PTEN protein also reduces its inhibitory effects toward the proliferation of cancer cells [21]. Therefore, PC tissue with higher stage exhibit lower PTEN expression. Meanwhile, because the PTEN protein has the same functions as cell membrane, the tissue with negative PTEN expression exhibits higher transfer rate [22]. There were some studies which mentioned that the loss of PTEN and P53 drives the prostate tumorigenesis [23-25]. These results are consistent with our results. The correlation analysis toward their expressions reveals no significant correlations between them; for example, 60.6% of the patients with positive PTEN expression still showed no mutation of the p53 gene, suggesting that the occurrence of PC is not only involved in PTEN and p53, the mutation or overexpression’s of other genes are also involved in. The small sample size is the limitation of the study and we will collect the more samples for further research.

In summary, apoptosis-related gene p53 and PTEN participate in the grading of PC, and affect patient’s prognosis, but no correlations between these two genes can be found.

This study was supported by Innovation project of health care technology in Jilin, No. 2016J020.