Purpose: To reveal the key genes and pathways involved in the metastasis of endometrial cancer remains.

Endometrial cancer is the sixth most common cancer affecting women in the western world, with at least 320,000 new cases being diagnosed resulting in 74,000 disease-related deaths in women worldwide [1]. Although endometrial cancer is efficiently diagnosed and successfully treated, the treatment of aggressive and progesterone-resistant cancer is difficult. However, patients with early stage disease have 5 y survival rates over 80% but 15-20% develops metastasis [2].

In the current study, we aimed to further elucidate the molecular mechanism of endometrial cancer metastasis and provide potential therapeutic target for treating endometrial cancer. Based on the microarray data GSE29436, further analysis was performed by identifying Differentially Expressed Genes (DEGs) in progressive samples compared with nonprogressive control, as well as functional annotation of DEGs. Finally, functions and involved biological pathway associated with metastasis of endometrial cancer were detected.

Microarray data GSE29436 were downloaded from Gene Expression Omnibus (GEO, http://www.ncbi.nlm.nih.gov/geo/) database based on the platform of Affymetrix Human Genome U133 Plus 2.0 Array. The dataset included 4 progressive endometrial cancer specimen and 4 non-progressive controls.

Data preprocessing and identification of DEGs

The affy package in R [6] was used to process the CEL files by converting the raw probe intensities to probe set expression values. Raw data were background-corrected and normalized with Robust Multi-Array Average (RMA) procedure [7]. Replicate probes for one gene were summarized by mean value as expression value for one gene. To identify critical genes in endometrial cancer metastasis, DEGs were detected using limma package in R [8] by comparing the expression profile between progressive and non-progressive samples. Batch effects in microarray expression data were adjusted using empirical Bayes method [9]. Genes were considered to be differentially expressed in progressive samples if |log2FC (fold change)|>1 and adjusted P-value<0.01. Then, hierarchical clustering was carried out for DEGs based on expression value of each sample.

Gene Ontology (GO) database [10] includes functions from three categories, biological process, cellular component and molecular function. The P value of GO terms was calculated (where n is the total number of genes, m the total number of genes that contain the term, c is the number of the genes of the list and k the genes of the list that contain the term). To study the functions of DEGs in progressive endometrial cancer, GO and Kyoto Encyclopedia of Genes and Genomes (KEGG) pathway [11] enrichment analysis were performed with hypergeometric distribution. P value less than 0.05 was set as the cut-off of GO terms and pathways.

After normalization of gene expression profile, intensity of genes in 8 samples were obtained, which was shown with box plot in Figure 1. 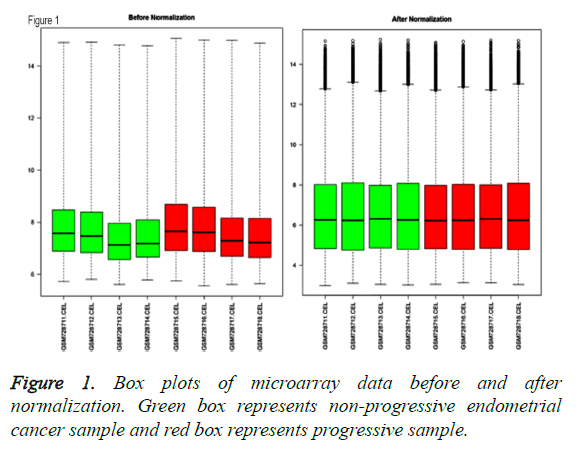 Identification of DEGs in progressive cancer 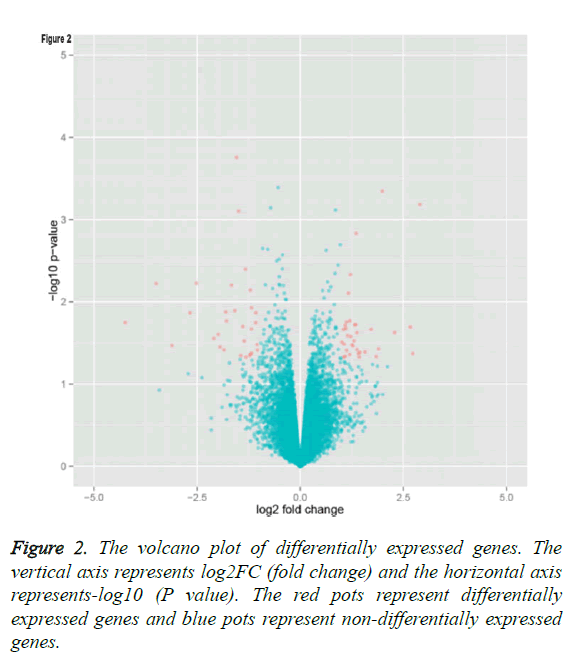 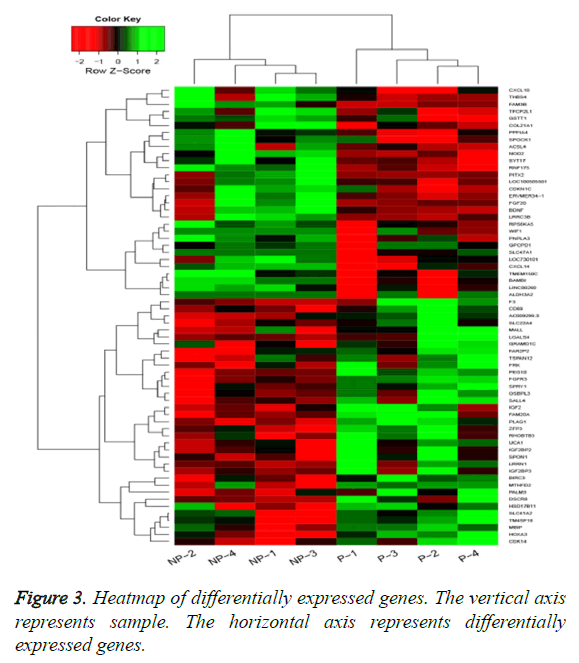 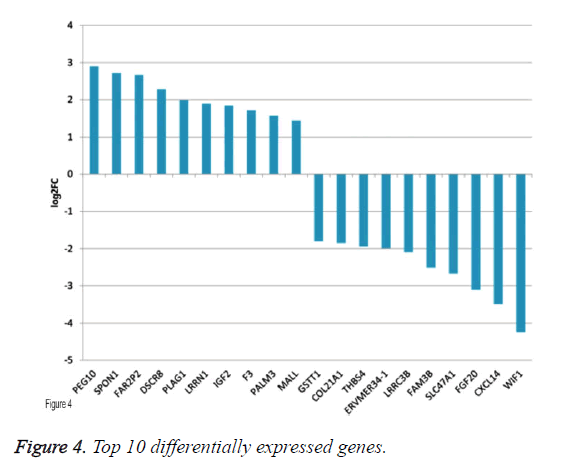 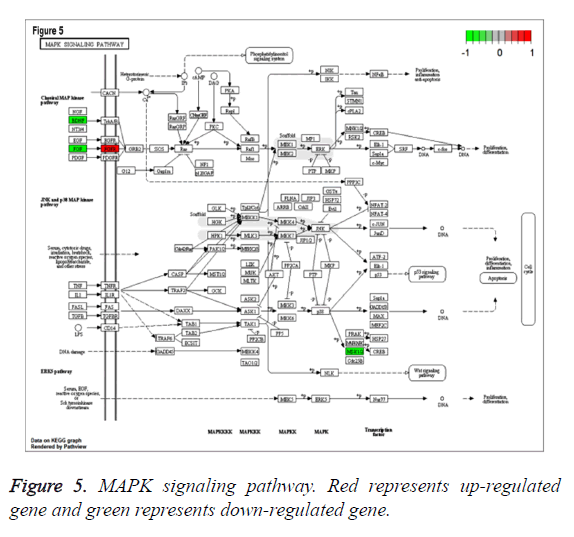 Endometrial cancer spreads by exfoliation of cells that are shed through the fallopian tubes, by lymphatic and or hematogenous dissemination or by direct extension through the myometrium [12]. The most common route of endometrial cancer metastasis is the direct extension of the tumor cells to the myometrium, which results from several interdependent processes including breaking the basement membrane and extracellular matrix by proteolytic enzymes, thereby promoting cell invasion and distant metastasis [13,14].

In the present study, microarray analysis was performed to elucidate the molecular basis of progressive endometrial cancer and showed that 65 DEGs between progressive and nonprogressive cancer samples. From the results of functional annotation, we found that those genes were significantly enriched in GO terms of cell proliferation, including PLAG1, IGF2, F3, FGF20 and THBS4. Additionally, most of genes were involved in MAPK and TGF-beta signaling pathways.

PLAG1 is a proto-oncogene whose ectopic expression presumably results in the deregulation of target genes and leads to uncontrolled cell proliferation in tumorigenesis [19]. Studies have indicated that PLAG1 is involved in various human tumors including pleomorphic adenomas of the salivary glands [20], lipoblastomas [21], hepatoblastoma [22] and leukaemia [23]. Collectively, the PLAG1 proto-oncogene seems to exert its oncogenic potential at least partially via IGF2 mitogenic signaling pathway which leads to downstream signaling responsible for cell proliferation [24]. In our results, PLAG1 was up-regulated in progressive endometrial cancer samples and exerted important role in tumor cell proliferation, which was consistent with previous results indicated by other study. Furthermore, considering the critical function of IGF2 mitogenic signaling pathway, we also found that IGF2 was upregulated in progressive cancer samples and mainly involved in cell proliferation-associated functions. These findings were in line with results that increased plasma levels of IGF2 were associated with endometrial cancer risk [25].

It was also found that down-regulated genes FGF20 and THBS4 were not only associated with functions of cell proliferation, but also involved in MAPK and TGF-beta signaling pathways. FGF20 belongs to a large class of FGFs which encoding secretory proteins with potent mitogenic and angiogenic roles in tumor development [26]. Previous study has shown that FGF20 was expressed at markedly elevated levels in part of human ovarian endometrioid adenocarcinomas harboring β-catenin defects [27]. However, FGF20 was downregulated in progressive cancer sample, and one possible explanation is that the gene was under the control of more than one pathway. Notably, FGF20 has been proved to activate the MAPK signaling pathway which is the major intracellular signaling pathway of FGFs and plays a crucial role in the neurotrophic activity of FGF20 [28]. Consistently, our bioinformatics results indicated that FGF20 exerted crucial role in MAPK signaling pathway. THBS4, a member of the extracellular calcium-binding protein family, is involved in cell adhesion and migration, and considered as a putative tumor suppressor gene in tumorigenesis [29,30]. In our study, expression levels of THBS4 were significantly decreased in progressive samples compared with non-progressive control. Moreover, THBS4 was involved in TGF-beta signaling pathway, which acted as a suppressor of epithelial cell tumorigenesis at early stages, but promoted cancer progression by contributing to tumor cell migration and invasion during the later stages. Taken together, these results suggest these genes have metastatic potential in endometrial cancer.

In conclusion, our results showed that 65 genes were differentially expressed in progressive endometrial cancer samples compared with non-progressive control, which were mainly associated with tumor metastasis possibly by enhancing cell proliferation and affecting MAPK and TGF-beta signaling pathways. High expression of PLAG1, IGF2 and low expression of FGF20, THBS4, therefore, appear to play an important role in tumorigenesis and progression of endometrial cancer. However, these findings warrant further prospective studies to be validated and determine if these genes could serve as new molecular targets for endometrial cancer therapy.

We certify that regarding this paper, no actual or potential conflicts of interests exist.