Zika Virus epidemic is expanding from Brazil to Americas. ZV is of immense public health concern, as it’s infection is resulting in physical as well as mental health issues in the people, especially among the pregnant women of the affected area. ZV infection causes neurological complications in adults and Congenital Zika Syndrome in infected fetuses. Unlike other viruses of this family, ZV escapes the host immune system, survives at higher temperatures and crosses the anatomical barriers of human body. Still there are structural similarities between ZV and Dengue Virus (DV) that are the mainstay of the research regarding its structure and viral-host immune system interactions.. Zika virus (ZV), a member of Flavivirus Family, has a positive sense RNA genome, a capsid and an outer shell. The envelope (E) protein is the major component of the shell that is the first interface interacting with host immune system, internal environment and the cell membranes infecting the host cells. Outermost shell of ZV is icosahedral in protein configuration with 180 E proteins in total, arranged in finger-like dimers. Three dimers line parallel to each other creating a diamond shaped asymmetric structure which can be further subdivided into symmetric triangles having half of the dimers triplicates. E protein is anchored by M protein in viral lipid membrane via a stem and a loop structure. A lipid membrane lines underneath the outer shell which covers the innermost chamber, the capsid. Capsid contains the genome, responsible for translation of three structural and seven nonstructural proteins. The potential targets for vaccine and drug development are in the Fusion Loop of Domain II in E protein monomers and NS1, NS2B, NS3, NS5, the nonstructural proteins. The identified targets are aimed to halt the replication and infectivity of the ZV at different stages of its maturity. Understanding of ZV structure is the key to identify the effective targets for prospective advancements in the vaccine and therapeutics development.

Zika Virus has affected more than one million individuals in Brazil and Americas since April 2015 [1]. Zika Virus (ZV) was first found in 1947 and named after a forest of Uganda [2]. Phylogenetically, ZV belongs to the virus clade, Spondweni, the Family of Flaviviridae and Genus of Flavivirus. Therefore, it shares the structure and genome organization with Dengue (DENV), West Nile (WNV), Japanese encephalitis (JEV) and yellow fever (YFV) viruses [3]. Current research of immunity and vaccine development is largely based on these structural similarities.

ZV has been found all over the map including Africa, South Asia and China [4]. The sporadic epidemics reported, as of Yap island in 2007, were caused by the Asian genotype of ZV [5,6]. The 2015 epidemic of ZV is so far the largest spread of this virus in the shortest period of time [7]. ZV has two main lineages, the Asian and the African lineage. The Asian was identified in the 2013-2014 epidemic spread in French Polynesia and African lineage in Americas [8]. The biological vector involved in ZV spread is a mosquito, Anopheles aegypti [1]. The predominant mode of ZV spread is the mosquito bite but there are WHO reports of sexual transmission, in New Zealand, France, Chile, United States, Argentina and Italy, as well [9,10]. ZV is a thermally stable virus as compared to Dengue Virus (DV). The ZV stability at about 40°C is considered the main contributing factor towards its largest epidemic in the temperate climate of Brazil and invasion in South America [11].

Primarily, ZV causes mild symptoms including fever and rash, most of which remain unnoticed without any further sequelae of infection [12]. The neurological complications include Guillain-Barre (GB) syndrome leading to the gradual whole body paralysis [13]. Zika virus has now been established as a teratogenic virus as it crosses the placental barrier and infects the developing fetus [12]. The Centers for Disease Control and Prevention USA has defined the group of five clinical features as Congenital Zika Syndrome (CZS) including microcephaly, decreased brain tissue, damage to the back of the eye, joints with limited movement and increased muscle tone [13]. The babies born without CZV syndrome but with ZV infection may develop postnatal microcephaly or delayed brain growth [14]. The most important anomaly in newborn babies is microcephaly that is defined as the head circumference less than or equal to thirty-two cms [15]. By January 2016, twentyfold increase in the birth of microcephalic fetuses had been reported in Brazil, just under a year of ZV epidemic [16]. Other complications in pregnancy with ZV include early miscarriage, fetal growth retardation or late intra-uterine fetal demise [16]. The ZV infection during pregnancy is not only responsible for pathological conditions in affected pregnant women but also for the stress and fear of a ‘pregnancy with devastating outcomes’ [17]. Women with microcephalic babies suffer from postpartum anxiety significantly more than the women with normal babies [17]. ZV causes the inflammation of male reproductive organs, the testis and the epididymis, destroys the spermatogonia leading to the male infertility [18]. ZV is sheded and can be detected in the semen till almost two months post-infection. This has raised the suspicion of the possible infected semen samples in human sperm banks in the Brazil and Americas [18]. Prevention and control of ZV infection needs development of an effective vaccine. Knowledge of ZV structure helps the researchers to probe into the targets for developing the vaccines and therapeutics [19]. Here ZV structure is explained in simplified manner for better understanding.

The structure of ZV bears similarities with the other viruses of the Family of Flaviviridae and the Genus of Flavivirus, especially Dengue Virus (DENV). Flaviviruses are classified in Taxonomy under the group ‘ssRNA positive-strand viruses, no DNA stage’ [20] where RNA strand directly provides the template for viral protein synthesis without any intermediate DNA step [21]. ZV contains a positive sense RNA genome at the core covered by a capsid followed by a lipid bilayer and an icosahedral outermost shell [19] (Figure 1).

The structural E proteins are present on the outer most shell of the ZV particle and interact with the host environment. These proteins play important role in receptor binding, membrane fusion and recognition by host immune machinery [22]. The 3.8 A-resolution structure of ZV mature particle, as understood via cryo-electron microscopy (cryo-EM), indicates that outer shell is icosahedral in shape. The basic unit of outer shell consists of an E protein, a glycoprotein molecule consisting of 505 amino acids and a membrane (M) protein made up of 75 amino acids. These proteins are attached to the underlying lipid membrane by their respective transmembrane regions. E protein consists of an E protein complex of three domains named DI, DII and DIII present on the surface and a fourth stem-transmembrane domain acting as an anchor. The DI, II and III domains are arranged such that DI is in the center, joining the DII on one side and DIII on the other, creating a monomer. One monomer joins another monomer in antiparallel fashion making a dimer. Three such parallel dimers arrange themselves in a diamond shaped configuration which can be further subdivided symmetrically in two halves by a two-fold axis. The complex configuration at end results in a smallest unit, a triangle, having half of three E protein dimers making the outer most coating of icosahedral shell of the ZV particle (Figure 2). There are 180 copies of this E protein complex making up altogether icosahedral outer shell of ZV particle [19]. 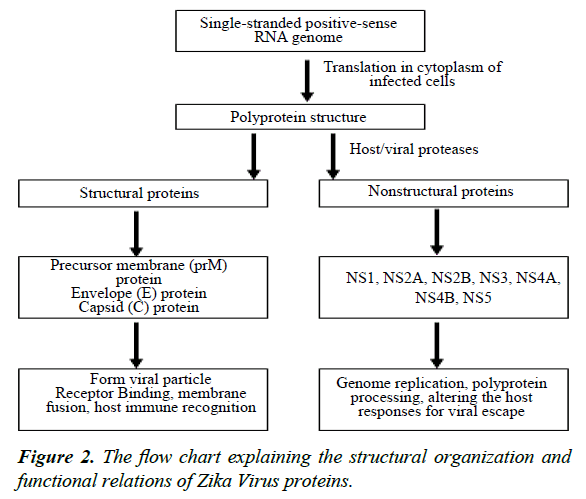 The DII domain has a ‘fusion loop’ (FL) at its tip where it joins the DIII of other monomer completing the dimer structure. There is a small gap in this area consisting of all hydrophobic residues 98-109 [23]. The fusion loop is a highly conserved sequence of residues in Flavivirus Family that plays a key role in the fusion of the host cell membrane and viral membrane [23]. 2A10G6 is a monoclonal antibody cross-reacting with most of the Flavivirus Family viruses including Dengue, West Nile and Yellow Fever viruses [24]. 2A10G6 attaches perpendicularly to the fusion loop residue component of DII domain of E protein. The fusion loop fits in between the heavy and light chain arms of the antibody [23]. The understanding and identification of fusion loop and its interaction with potential neutralizing antibodies is an exciting and promising future research area in search of vaccines and therapeutics against ZV.

The nonstructural proteins, NS1, NS2A, NS2B, NS3, NS4A, NS4B and NS5, are seven in number. The evidence suggests that NS1 glycoprotein plays an anchoring role in fetal pathologies especially the microcephaly [19]. NS1 helps in immune evasion as it is synthesized in the host cell and secreted out on the surface of its cell membrane. It can be detected in host blood in case of all types of flavivirus infections [25]. NS2B and NS3 have protease function and process the polyprotein. The NS5 nonstructural protein consists of two domains both acting as enzymes involved in genome replication. The C-terminal domain is RNA dependent RNA polymerase (RdRp) responsible for the viral genomic RNA replication. On the other hand, the N-terminal domain is a methyltransferase which regulates the perfect translation of genome codes. The nonstructural proteins are essential for virus propagation inside the host cells [19] (Figure 2).

For now, both structural and nonstructural proteins are potential targets for drug development research. The genomic codes of epitopes on the E proteins have been used to develop the DNA [26] and mRNA vaccines [27]. As NS1 is displayed on the lipid membrane of infected cells, it may be responsible for breaching the host immune system while ZV crosses the blood brain barrier, placental barrier and blood testicular barrier [19]. NS1 protein is a possible target for antiviral therapy for future research. NS2B and NS3 can potentially be inhibited and used as therapeutic targets to halt the viral replication by depleting the protein synthesis. NS5 protein based enzymes inhibition may be very effective therapeutic target for ZV replication inside the host cells.

Zika Virus prevention and control needs the development of vaccine and therapeutics. To-date the potential ZV vaccines in preclinical stages are against the Envelope protein targets. Although monoclonal antibodies, as 2A10G6, are under investigation but the potential cross-reactivity of these antibodies with DENV epitopes is major risk for the safety of clinical trials while testing these molecules. Better understanding of E protein structure as of fusion loop may help to configure an effective vaccine able to generate the neutralizing antibodies against ZV. Soon, antibodies, vaccines and drugs, along with the efforts of public health sectors will overcome Zika Virus epidemic and its sequelae.