Pseudoexfoliation (PXF) is evidenced by fibrillary aggregates causing secondary glaucoma (PXF-G) by blocking the Trabecular Meshwork (TM). As the age-related cellular senescence of human TM poses threat to culture of human TM, the profile of bovine ocular tissues was compared to that of human and the effect of PXF interplay molecules-growth factors, proinflammatory cytokine, and small molecules on bovine TM (bTM) cells was studied in vitro . Lens capsule, Iris and trabecular meshwork tissues were collected from human donor eye balls and bovine eye balls to evaluate the expression of Lysyl Oxidase (LOX), Lysyl Oxidase-like 1 (LOXL1), Lysyl Oxidase-like 2 (LOXL2). The mRNA expression of LOX, LOXL1, LOXL2 and Eln was maximal in TM tissue compared to Lens capsule and Iris tissues as observed in both human donor and bovine eyes. bTM was cultured and exposed to TGFβ1, CTGF, IL-6, Hcy and HCTL for 24 h to evaluate LOX expression (WB) and Elastin expression (qPCR/ Immunofluorescence), in vitro. bTM on exposure to TGFβ1, IL-6, Hcy and HCTL showed increased expression of LOX and Elastin. Elastogenesis and increased LOX expression characteristic of PXF pathology were demonstrated in primary bovine TM cells and therefore is proposed as a model for PXF pathology in terms of elastosis.

Pseudoexfoliation syndrome (PXF) is a chronic disorder marked by flaky fibrillar deposition of PXM on the ocular tissues in around 30% of the ageing population worldwide [1,2]. An Indian study reports PXF to occur unilaterally in 73.68% with 55.26% in the 60-69 years age group, followed by 21.05% in 70-79 years [3]. The PXF material (PXM) deposited on the Lens surface is the most characteristic feature aiding in the diagnosis of the disease which also contributes for the complications associated therewith [1,4]. PXM from the anterior lens surface and disrupted iris pigment epithelium due to irido-lenticular friction leads to leak and deposition of the pigment in the Trabecular Meshwork (TM), which also produces PXM, leading to accumulation and elevated Intra- Ocular Pressure (IOP). This results in degenerative changes of Schlemm's canal and the adjacent tissues [5] causing PXFGlaucoma (PXF-G), the leading cause of secondary open-angle glaucoma worldwide [6]. Thus, PXF-G is a secondary open angle glaucoma due to accumulation of the PXM in the TM occurring in 25% of PXF cases worldwide [5,7].

Recent research suggests that PXF is a multi-faceted disease with contributions made by genetic factors, molecular pathways, cellular changes and environmental factors [8]. PXF is characterised as an elastotic disease [9]. Recently we reported on increased elastin expression in both aqueous humor (aqH) and the lens capsule of PXF cases [10]. We had reported earlier on the altered activity of Lysyl oxidase enzyme that cross links elastin, associated with changes in TGFβ1 in the aqH [11]. However, the disease mechanism is still not delineated and more studies are warranted. Cell models have to be explored to further understand the disease mechanism. With age-related cellular senescence in aged human trabecular meshwork tissue posing threat to culture of TM cells from human donor and heterogeneity in cell type in the patient derived surgical specimen of trabecular meshwork, we aimed to assess primary cells from bovine TM tissue as for the elastogenesis model in vitro [12]. The study compared the expression of Elastin and Lysyl oxidase in the TM tissue with that of iris and lens capsule tissues in bovine and human eyes. PXF-G is considered more serious than the other forms of open angle glaucoma with higher IOP, poorer response to drugs and more pronounced optic nerve damage seen in PXF-G [13]. PXF is said to be an elastosis disorder with excessive synthesis and insufficient degradation of ECM components [1]. Studies have reported on the use of spontaneous cell line of bTM to assess TGFβ- induced expression of various cross-linked actin networks (CLANs) such as fibronectin (FN), plasminogen activator inhibitor-1 (PAI-1), and CTGF [14]. Though PXF is not reported in bovine, the bTM cells can be used for inducing Elastin synthesis in vitro to study elastogenesis, if promoted by various molecules associated with PXF pathology namely, Hcy, HCTL, CTGF, IL-6, apart from TGFβ. Earlier reports suggest the interplay of PXF-pathogenic factors that is seen to accumulate in aqueous humor, which includes growth factors such as TGFβ1 CTGF, inflammatory cytokine namely IL-6 as well as Hcy in PXF pathogenesis [11,15-18].

Tenon’s tissue being fibroblastic in nature is not ideal to explore the mechanism of disease onset in an in vitro model. Therefore, TM, which is the major site for regulation of aqH outflow, was studied in the context of Elastosis. Though primary cells of TM from human donor eye have been reported, reports on the senescence may influence the understanding of early markers of disease onset [19]. In addition, scarcity of young donor eye balls for TM culture is also a concern. Thus, for this study, donor eye balls (n=6; aged 82 ± 9 y; 3M/3F) were collected from the CU Shah eye bank, Medical Research Foundation, Sankara Nethralaya after obtaining informed consent from the relatives of the deceased. It was assured that the donor lens specimens did not have PXF deposits and had no Diabetes mellitus or other major systemic diseases. Bovine eye balls (n=6; aged <3 years) were procured from a local abattoir. The Lens capsule, iris and TM tissues were dissected and taken in TRIzol reagent (Favorgen, USA) for RNA isolation. Total RNA was isolated from the Lens capsule, Iris and TM according to manufacturer’s protocol. One microgram of total RNA was converted to complementary DNA using iScript cDNA synthesis kit as per the manufacturer’s instruction. The gene-specific primers were designed for the genes Elastin (Eln), Lysyl Oxidase (LOX), Lysyl Oxidase-like 1 (LOXL1), Lysyl Oxidase-like 2 (LOXL2). qPCR based on SYBR green Chemistry was done for all the genes using CFX 96. The ΔCt method was used to analyse the results of the genes of interest relative to internal control gene (18S rRNA). Based on ΔCq value, the Elastin expression is maximal in TM, followed by Iris and Lens capsule. A very similar pattern is observed in the Bovine Elastin gene expression (Figures 1A-1C). LOX expression was relatively higher in TM compared to Lens capsule and Iris in both human and bovine. Looking at the bovine tissues, TM shows the maximal expression of LOX, LOXL1 and LOXL2 compared to Lens capsule and Iris (Figures 2A-2C). The study revealed maximal elastin and lysyl oxidase expression which are the key disease markers of PXF. Lysyl Oxidase is a copper-dependent amine oxidase on cleavage of pro-peptide by Bone Morphogenetic Protein-1 (BMP-1), catalyses the oxidative deamination of lysine residues in tropoelastin (precursor of Elastin) results in the matured Elastin formation [20]. LOX comprising of a family of 5 members- LOX, LOXL1, LOXL2, LOXL3 and LOXL4, is involved in the remodelling of ECM [21]. The Elastin and Lysyl Oxidase gene expressions in the anterior segment tissues namely lens capsule, iris and TM were very similar in bovine and human eyes and TM tissues showed maximal expression of LOX and elastin. Confirmation on the suitability of bovine tissues with comparable results in bovine and human ocular tissues, the bTM was chosen for culture. 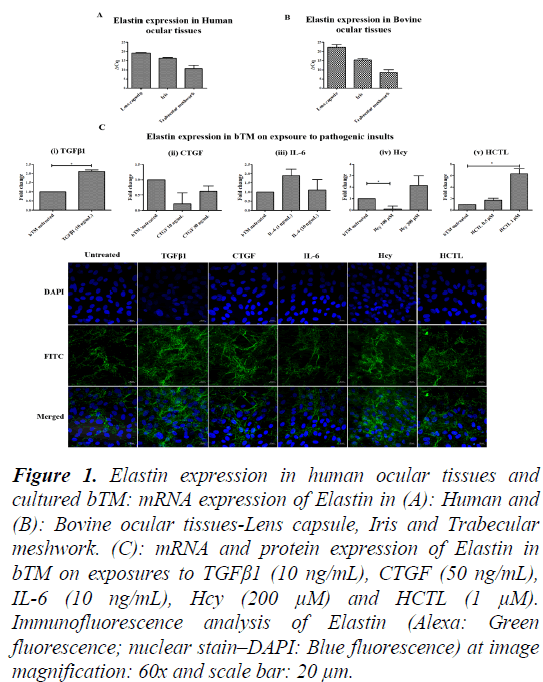 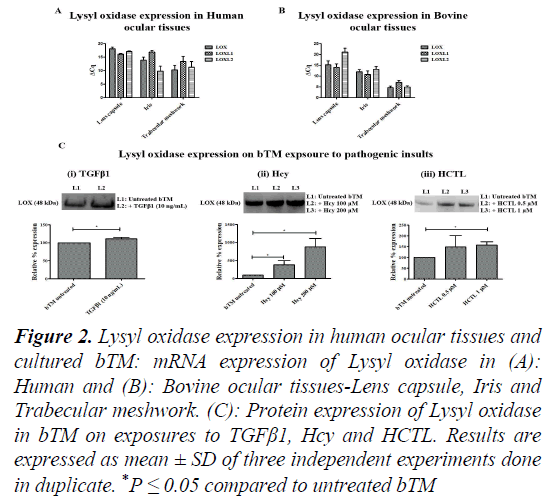 Results are expressed as mean ± SD of three independent experiments done in duplicate. *p ≤ 0.05 compared to untreated bTM. Thus, from another set of young bovine eye balls procured from the local abattoir in PBS containing 1X solution of antibiotic-antimycotic (Gibco, Life Technologies, CA, USA), the TM was carefully dissected from the anterior portion and washed thrice in PBS. The tissue was then transferred to 1 mL of 0.25% trypsin containing 0.53 mm EDTA and incubated at 37°C for 1 h. It was then centrifuged at 3000 rpm for 5 min. The supernatant was discarded and the pellet was dissolved in in Dulbecco’s Minimum Essential medium (DMEM) F-12 media supplemented with 10% (v/v) Fetal Bovine Serum (FBS) (Gibco, Life Technologies, CA, USA), 14.2 mm Sodium bicarbonate (Sigma, USA) and 1X solution of antibiotic-antimycotic. This was then seeded onto a T-25 flask (Tarsons, USA) and incubated in a CO2 incubator with 5% CO2. The cells showed endothelial morphology. Quantitative PCR (qPCR) based on SYBR green Chemistry was done for Myocilin (Myoc) –a trabecular meshwork inducible glucocorticoid response molecule on treatment of bTM with Dexamethasone (DEX; Sigma, USA), a glucocorticoid by qPCR using CFX 96 (Bio-Rad, USA) for marker studies [22]. The comparative 2(−ΔCq) method was used to analyse the results of the gene of interest relative to internal control gene (18S rRNA). The cells were further passaged after marker studies. Functionally, the expression of Myocilin was seen in bTM culture, which is characteristically increased on exposure to Dexamethasone till passage [6]. Further studies with bTM were done at passage [5].

The mRNA expression of Eln on exposure of bTM to TGFβ1, Hcy and HCTL showed a significant increase with a mean of 2.2-fold (P=0.05), 2.2-fold, 6.2-fold (P=0.04), respectively. However, CTGF and IL-6 did not influence Elastin expression largely. The results were concordant to protein expression of Elastin assessed by Immunofluorescence (IF) captured using LSM 710 Confocal Laser scanning microscope (Carl Zeiss, Oberkochen, Germany) on bTM cultured on 4-well chamber slides (SPL, USA), thereby, showing the modulating effect of molecules in Elastin.

With, increased Elastin expression seen in bTM on exposures to TGFβ1, Hcy and HCTL, the protein expression of Lysyl oxidase was checked in bTM on the same exposure conditions. Equal volume of the conditioned media was resolved on a 10%SDSPAGE and blot transferred in PVDF membrane using semi-dry transfer. The blot was blocked using 5% skimmed milk for 1 h and was incubated with anti-LOX antibody (1:1000; anti-goat; Santacruz, USA). After washing thrice with 1X TBS-T, the blot was incubated with 1:10000 anti-mouse (Santa Cruz, USA). This was washed thrice and was developed using ECL (Bio-Rad, USA) in Fluorchem FC3 Gel Documentation system (Protein Simple, USA). Band intensity was quantified using Image J software (NIH, Maryland, USA). On exposure to TGFβ1, Hcy and HCTL, the expression of Lysyl Oxidase was found to increase significantly in bTM. Our results show an increase in the expression of Elastin and Lysyl Oxidase in bTM upon induction of TGFβ1. A report on human Trabecular meshwork cells (hTM) shows increased expression of LOX on exposure to TGFβ1 supporting our finding [23]. Previous studies report on the increased expression of Fibronectin upon TGFβ1 induction in human TM cells, thereby suggesting Elastosis [24]. The exposure of bTM to CTGF resulted in the decreased expression of Elastin as observed in this study. Reports suggest that CTGF inhibits LOX expression and also the LOX activity on Elastin promoter, thereby inhibiting Elastin expression in 293T Human embryonic kidney cells [25]. Further, this study clearly showed that Hcy and its thioester HCTL augment mRNA and protein expressions of Elastin in bTM with a concomitant increase in LOX expression. Elevated Hcy levels in aqH of PXF and PXF-G cases are reported [26,27]. Recently we reported on the high levels of Hcy in lens tissue of PXF and PXF-G10. The role of Hcy in the disease mechanism of elastosis needs further studies in such cell models apart from clinical studies. However, the chronic exposure of these metabolites on LOX and LOXL1 expression has not been done, which warrants further studies to relate to the late state of the disease as in PXF-G.

The study shows that the expression of ECM proteins relevant to PXF pathology as evaluated by elastin and LOX is comparable between bovine and human. The study also shows that the PXFpathogenic molecules increase LOX expression and are proelastogenic as evaluated in the bovine trabecular meshwork cells (bTM). Thus, the study paves way for the use of bTM as an in vitro model system to study the defective elastogenesis mechanism relevant to PXF. Thus, the study proposes primary bTM and the use of molecular players studied for the proelastogenic effect to mimic PXF pathology in vitro.