Efficiency of invertebrate animals for risk assessment and biomonitoring of hazardous contaminants in aquatic ecosystem, a review and status report.

Invertebrate animals exhibited successful detoxification and storage of hazardous inorganic contaminants. Moreover, waterflea Daphnia sp., other crustacean arthropods and molluscan species were implied as sentinel organisms for aquatic contaminants. Benthic invertebrates might be used as biological monitors for heavy metal pollution. They spend most of their lives at the contaminated site. They can determine the concentration of existed heavy metal pollution. A variation in the efficiency of heavy metal accumulation was shown between different invertebrate groups. Molluscan animals specially gastropods showed the greatest capability to bioaccumulate heavy metals within their digestive cells. They acquired higher bioaccumulation factor relative to arthropods and annelids. At the cellular level, heavy metals might be stored after detoxification as granules of different shapes and sizes or as lipid droplets. The present review discusses the capability of different invertebrate groups to detoxify and store inorganic contaminants and their efficiency as possible biomonitor organisms for aquatic ecosystem.

Rapid growth nowadays in the economy and increasing human population has led to the increase of land use, energy, agricultural products, raw materials and investment. Uncontrolled disposal of inorganic and organic waste materials in the aquatic ecosystem has resulted in significant losses of biodiversity of inhabitant invertebrates [1,2]. Heavy metals are more hazardous pollutants than organic contaminants as they are non-degradable. Moreover, their toxic effect can persist for a longtime [3,4]. Hazardous contaminants have either direct or indirect effect on human health [5]. They might show severe impact on animal life [6-9]. If the metal concentration exceeds a threshold level, the toxic signs start to be manifested in the exposed organism. Variation in acute and chronic toxicity was shown among vertebrates and invertebrate animals. Caddis flies were studied as biomonitors for threshold metal toxicity affecting stream benthos [10].

Several studies reported the possible use of invertebrates as sentinel organisms for heavy metals, inorganic and some organic contaminants [2,11-14]. Cladoceran Daphnia is very sensitive for aquatic pollutants [15,16]. It is commonly used as bioindicator for hazardous contaminants at biomonitoring stations.

Good water quality was defined by Kindt [17] as the lack of toxic substances, garbage, industrial wastes, sewage sludge, radioactive wastes and oil. Nkwoji, et al. [18] reported the use of diversity and abundance of macrobenthos as bioindicators for water quality because of their variable response to hazardous contaminants. Hadley [5] stated that the pronounced decrease or increase in population density of macroinvertebrates can be used as bioindicators for poor water quality.

Heavy metals are more hazardous pollutants than other contaminants as they are non-degradable. Moreover, their toxic effect can persist for a longtime [3]. Severe toxic effect can be observed in the exposed organisms after the concentration of hazardous contaminant attained a threshold level. Living organisms vary in their tolerance limits based on their sensitivity to various metals [11].

Uptake of heavy metals from the inhabitant water or intake via feeding on algae or predation of small animals are the main routes of entry of metals into animal cells [1,11,19]. Only dissolved free metal ions are the available heavy metals to uptake into animal cells [20]. Mechanism of detoxification is described by previous studies for entered metals binding them with special amino acid called metallothionin (a sulphhydryl-rich protein with low molecular weight) forming granules or electronic dense or translucent vesicles of various sizes [1,21,12,13]. The amount of heavy metals concentrated in the animal tissue is the difference between the entered heavy metal and released. The concentration of a substance within the accumulator organism is the difference between the amount taken in and the amount released [4].

Monitoring heavy metal pollution using sensitive chemical instruments is not valuable. Heavy metals exist in aquatic environment as complexes or free ions. Only free ions are available for living organisms. Moreover, if the analysis with those instruments resulted in nonhazardous concentrations of metal pollutants, the metal concentrations can be transferred and multiplied across the food chain from one consumer to the other [25]. Simkiss et al. [11] suggested the roles for efficient biological monitor. The selected organism should has the ability to detoxify the contaminant turning it into non-harmful compound and should store them several folds of the inhabitant water or sediments. Also, stored contaminant should not affect the healthy status of organism. The selected organism should have a life cycle of at least on year to allow the following of contaminant concentration within its tissue throughout different seasons. It should be of big size to allow analysis of soft tissue to determine the concentration of different contaminants.

Some invertebrate organisms were introduced as biomonitors for the aquatic habitats [15,16,20,25,26]. Mollusks are successfully used as biomonitors [15,26-28]. They have the ability to detoxify metal pollutants and storing them within some organelles of their tissues several folds of the surrounding habitats, so that a bioaccumulation factor can be determined for each metal [9,29]. Digestive gland in mollusks was suggested to be the site of metal storage and the production of metal granules [13].

Molluscs proved successful capability of storage of inorganic and organic contaminants [9,2,30]. Dauvin [31,32] used macrobenthic invertebrates as indicators for the health of estuary ecosystem after oil spills. He reported a change in amphipod/annelid ratio after the oil spills. Scallop showed high bioaccumulation of lead at its soft tissue [33].

Histological examination of their soft tissues (Figure 2) displayed regular light structure of gut as those inhabiting control non contaminated areas, while those inhabiting polluted areas showed the presence of granules on some gut tissues [29,34]. 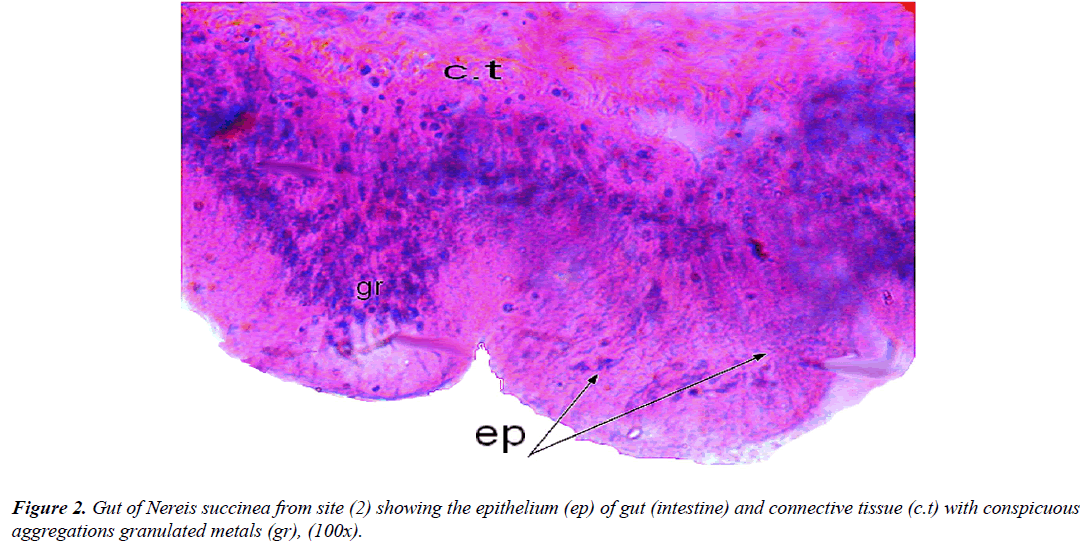 Moreover, as an endobenthic species, Nereis is particularly exposed to pollutants since sediments are the main reservoir for a number of chemicals. The body size and concentrations of the energy reserves were consistently lower than in worms from a reference site that might be the consequence of the physiological cost needed to cope with the presence of toxicants [35].

Zooplankton organisms are important elements of the aquatic food chain. They are intermediary link in the food chain and can transfer energy from phytoplankton as primary producers to the larger invertebrates or fish [37]. Spatial distribution of zooplankton, abundance and body size were used as bioindicator for water quality at marine habitat. Presence of predator, change of water quality criteria are among the factors that control zooplankton distribution [38]. Parmer et al. [39] reported the zooplankton can help to evaluate the level of water pollution and other environmental stressors. The copepod Acartia tonsa Dana was reported by Bianchi et al. [40] in the Lagoon of Venice as an indicator species in highly eutrophic areas. Raut and Shembekar [41] reported 19 zooplankton bioindicator species including 8 rotifers, 4 cladoceran, 6 copepodes and 1 ostracode at Borna (Chandapur) Dam, near Parli, India.

Meiofauna exist all life span at it’s a limited space. Therefore, they can be used as bioindicator for water quality and contamination status of their inhabiting area. Foraminifera and the metazoan nematode species were used as indicator for health status of aquatic ecosystem [42,43]. Murray [44] and Dijkstra et al. [45] used the protozoan Foraminifera assemblages as bioindicators for heavy metals and persistent organic pollutants (POP). Murray [44] found that water criteria such as salinity, dissolved oxygen, water temperature and nutrient availability affect for aminifera distribution, Bervoets et al. [46] used the two benthic invertebrates; Chironomus and Tubificid worms as predictors for ecological effects in aquatic ecosystem.

Several literatures highlighted the capability of helminth parasites to be used as bioindicator for water quality assessment. Increase of number of helminth genera and abundance of different species in the aquatic ecosystem gives an indication of quite healthy ecosystem. Nematodes showed resistance to hazardous pollutants as they were isolated from vertebrate animals inhabiting aquatic contaminated ecosystem [30,47]. Acanthocephala inhabiting fish intestine can accumulate heavy metals several folds that of their host tissues in ratio higher than that of the zebra mussel Dressina polymorpha [48]. He explained that the accumulation of metals in Acanthocephala is not a result of slow accumulation but takes place via rapid uptake process till a steady state. Vidal-Martínez et al. [49] found that polyaromatic hydrocarbons of high molecular weight (PAHH) might affect the occurrence of larval Cestode Oncomegas wageneri in the Gulf of Mexico.

Heavy metals, organic or inorganic contaminants occur normally combined in the aquatic habitats. Metals naturally exist in variable ratios with each other and with organic or inorganic contaminants depending on different discharge sources [50]. Wong [51] recommended the use of metal mixtures for both chronic and acute toxicity studies rather than single metal solutions, as they provide more valuable and realistic information about the nature of heavy metal toxicities in the aquatic ecosystem. Previous investigations on the toxicity of combined metals showed that the interaction of lead and copper has synergistic effect and were more toxic than single metals [9,52].

On the cellular level, basophil cells from snail live at contaminated and relatively clean sites (Figure 3) are pyramidal in shape containing a system of Golgi bodies and rough endoplasmic reticulum in the middle and basal regions. The digestive cells contain vacuoles and granules of varying in shapes, sizes and electron density (Figure 3). Copper and cadmium are detoxified after cellular uptake. Those metals were shown to bind to special amino acid forming metallothionin that is nontoxic to the living cell. Detoxified metals were stored within the lysosomes (Figure 3) in the form of electron lucent or electron dense vesicles of various shapes and sizes [1,9,13,21]. Exposure of freshwater prosobranch snails to less toxic concentrations of lead chlorides (Fig 4) showed regular structure of basophil and digestive cells. Lead was shown to be stored in the form of granules or lipid droplets [12]. 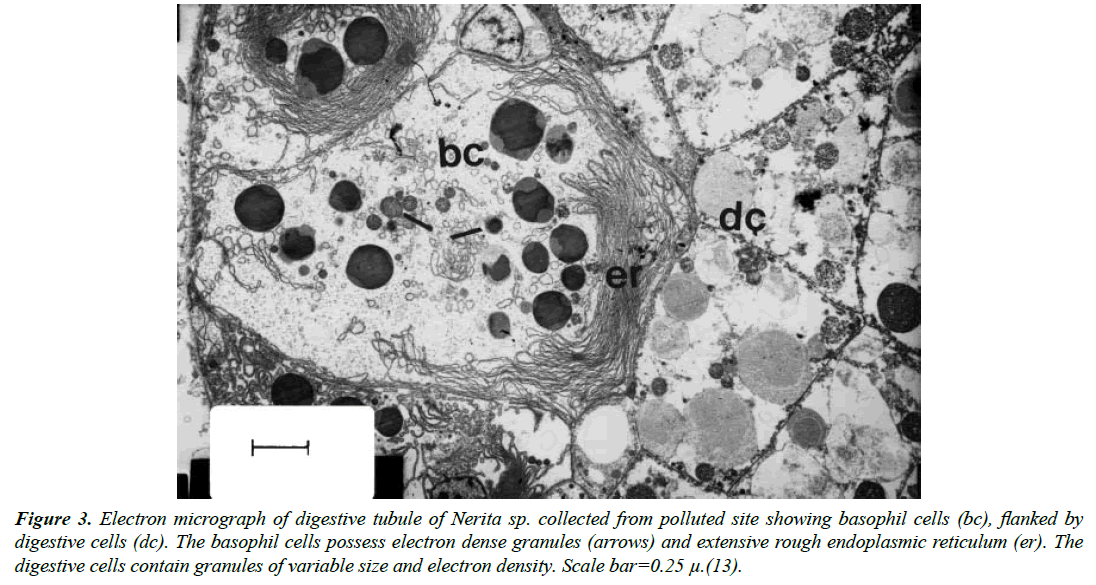 Many of the contaminants enter the aquatic ecosystems including lead, mercury, pesticides, and herbicides as a result of uncontrolled discharge of agricultural and industrial wastes. Variable toxic effects was shown on living organisms. They can reduce reproductive activity, inhibit growth and development, and even cause death. Filter feeders such as mussels, clams and other organisms higher in the food chain are also affected by the presence of hazardous contaminants. Most marine invertebrates possess detoxification mechanism turning the pollutants nontoxic and bioaccumulate them within their tissues several folds of the surroundings. Increase or decrease of abundance and species richness of benthic invertebrates might be used as bioindicator for water quality of the aquatic ecosystem.

Many thanks are due to the editorial board for their kind invitation to contribute to the first volume of the Journal.