Effects of a rare sugar, D-allulose, coingested with fat on postprandial glycemia and lipidemia in young women.

Aim: Postprandial hyperlipidemia is a major risk factor for coronary heart disease. Our previous study revealed that ingesting fructose with fat cream delays and exacerbates postprandial lipidemia. A rare sugar, D-allulose, has recently attracted attention as an alternative zero-calorie sweetener to natural sugars. In this study, we investigated the effect of ingesting D-allulose with fat cream on postprandial glycemia and lipidemia in young women. Methods: Eleven young Japanese women with apolipoprotein E3/3 phenotype were enrolled. They underwent 4 test trials: fat cream (0.35 g/kg as fat; F trial), fat cream with D-allulose (0.5 g/kg; FA trial), fat cream with fructose (0.5 g/kg; FFr trial), or fat cream with sucrose (0.5 g/kg; FS trial). Blood samples were taken before (0) and at 0.5, 1, 2, 4, and 6 h after ingestion. Results: In the FA trial, serum glucose and fructose concentrations at 0.5 and1 h were significantly lower than those in the FFr and FS trials. In the FA trial, the serum glucose concentration did not increase during the experiment. Serum triglyceride and remnant-like particle-triglyceride concentrations peaked at 2 h in the F trial, and at 4 h in the FA, FFr, and FS trials. Conclusion: When ingested with fat, D-allulose showed almost no glycemic response in contrast to fructose or sucrose. However, ingesting D-allulose with fat may delay postprandial lipidemia similar to these sugars.

In our previous studies, postprandial triglyceride (TG), remnantlike particle-TG (RLP-TG), and apolipoprotein B-48 (apoB48) concentrations following the ingestion of fructose (0.5 g/kg body mass) in combination with fat cream (0.35 g/kg as fat) were found to be higher than those following the ingestion of glucose [1]. The ingestion of a high-fructose syrup (HFS)- containing beverage in combination with fat cream delayed and exacerbated both exogenous and endogenous lipoprotein metabolism, and the ratio of fructose to glucose contained in the beverage was a key factor in the metabolic disturbance when the sugar load was equicaloric [2]. Furthermore, the ingestion of cola (a high-fructose beverage) in combination with a hamburger (a high-fat diet) delayed postprandial lipidemia in comparison with the ingestion of a hamburger only, suggesting that fructose contained in the cola delayed and exacerbated postprandial lipidemia [3]. A rare sugar, D-allulose, has recently attracted attention as an alternative zero-calorie sweetener to natural sugars, particularly sucrose, fructose, and HFS. Rare sugars are defined by the International Society of Rare Sugars as monosaccharides and their derivatives that exist in nature but are only present in limited quantities (The 1st International Symposium of the International Rare Sugar Society, Takamatsu, Japan). Although biological functions of rare sugars have not been fully investigated because of their 'rarity' or less availability, Izumori innovated a mass production method of rare sugars (named as 'Izumoring'), which enabled detailed studies of them [4]. D-Allulose (formerly called as D-psicose), a C-3 epimer of D-fructose, is a rare sugar found only in small quantities in nature [4]. Simultaneous ingeston of D-allulose (5 or 7.5 g) decreases glycemic response to 75 g oral maltodextrin tolerance test in men and women [5], probably by inhibiting α-glucosidase in the intestine and/or by promoting the uptake of glucose and accumulation of glycogen in the liver [5]. Consumption of D-allulose (5 g) with a standard meal mitigated postprandial plasma glycemic response in borderline diabetic subjects [6]. D-Allulose has also been reported to lead to less accumulation of intraabdominal fat compared to glucose or fructose in rats [7]. However, there are few studies which examined the effects of D-allulose on the lipid and lipoprotein metabolism. Moreover, as far as we know, there have been no studies on postprandial lipidemia in humans. Hence, in the present study, we aimed to elucidate postprandial lipoprotein metabolism following simultaneous ingestion of D-allulose with fat cream in young Japanese female university students. This generation of women was used because the highest consumers of HFS and sucrose are adolescents and young adults in the USA [8], and the ingestion of fast food is higher in university students than in high-school students in Japan [9].

Eleven young Japanese female university students with regular ovarian cycles and apolipoprotein E phenotype 3/3 were enrolled as participants. All subjects were nonsmokers, had no apparent acute or chronic illnesses, and were not taking any medications or dietary supplements. This study was approved by the Institutional Review Board of Sugiyama Jogakuen University School of Life Studies (No. 2013-2). The participants provided written informed consent. The procedures were conducted in accordance with the Helsinki declaration of 1975 as revised in 1983.

Body mass and height were measured according to standard methods. Waist circumference was assessed as the abdominal girth at the level of umbilicus, and hip circumference was measured at the level of greater trochanters. The waist-to-hip (W/H) ratio was calculated. Body composition, including the visceral fat area (VFA), was analyzed using an eight-polar bioelectrical impedance method (InBody720, Biospace, Tokyo, Japan).

Subjects (n=11) abstained from consuming caffeine or alcohol during the day before the experiment. Each subject was studied on 4 occasions in a randomized single-blinded crossover design, and ingested one of the 4 beverages after a 12-h overnight fast: fat cream with water (F trial), fat cream with D-allulose (FA trial), fat cream with fructose (FFr trial), or fat cream with sucrose (FS trial). Fat cream (OFTT cream™) was purchased from Jomo (Takasaki, Japan), and subjects ingested 1 g/kg body mass (0.35 g/kg as fat) as described previously [10,11]. Each sugar was ingested in the amount of 0.5 g/kg body mass. D-Allulose, fructose, and sucrose were dissolved in distilled water and provided as 10% (w/v) solution. In the F trial, subjects ingested same amount of water. D-Allulose was supplied by Kagawa University Rare Sugar Research Center (Miki, Kagawa, Japan). Fructose and sucrose were purchased from Kanto Chemical (Tokyo). Venous blood samples were obtained before ingestion (0 h) and at 0.5, 1, 2, 4, and 6 h after ingestion. During the test, subjects avoided exercise and eating, but had free access to water after 1 h. All blood samples were collected while subjects were in a supine position. There was a 4-week interval between the trial days to minimize the confounding effects of the menstrual status on lipid metabolism.

Postprandial changes in the concentrations of glucose, fructose, insulin, TG, RLP-TG, RLP-C, apoB100, and apoB48 were calculated as the difference from the baseline mean value (as 0 at 0 h) and shown as Δglucose, Δfructose, Δinsulin, ΔTG, ΔRLP-TG, ΔRLP-C, ΔapoB100, and ΔapoB48, respectively. The postprandial metabolism was quantified by calculating the incremental area under the curve (ΔAUC), which was defined as the difference between AUC, which was determined by trapezoidal method, and the area below baseline (0 h) from 0 to 6 h, as described previously [2].

Statistical analyses were performed using SPSS ver. 19 (IBM, Tokyo). Gausian distribution of data was verified using the Shapiro-Wilk test for skewness and kurtosis of distribution. Data were presented as the mean ± SEM. We analyzed differences in the time-course compared with the fasting values by performing a repeated measures analysis of variance (ANOVA), followed by the Dunnett test. The measured value differences at each time-point in the 4 trials were assessed by a repeated measures ANOVA followed by the Bonferroni test. For all data, p<0.05 was considered statistically significant.

The physical characteristics and fasting blood chemical data of subjects are shown in Table 1. There were no significant differences in any of them among the 4 trials (not shown). Fasting and postprandial chemical data in the 4 trials are presented in Table 2 (glucose, fructose, insulin, lactate, and FFA) and (Table 3) (TG, RLP-TG, RLP-C, apoB48, and apoB100). (Figure 1) shows the time courses of Δglucose (A), Δfructose (B), Δinsulin (C), ΔTG (D), ΔRLP-TG (E), ΔRLP-C (F), ΔapoB100 (G), and ΔapoB48 (H) are shown.

Table 1. Anthropometric and clinical characteristics of the subjects. 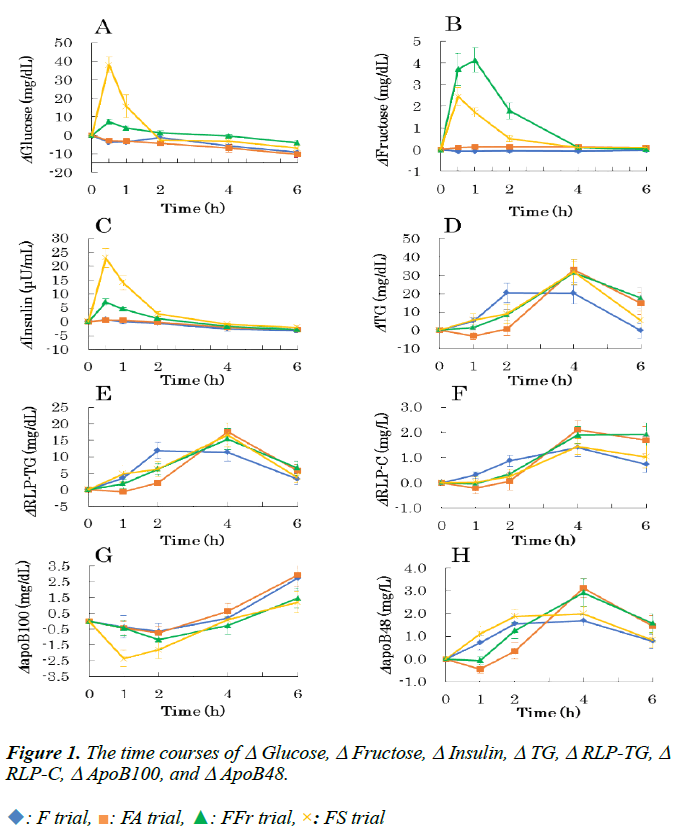 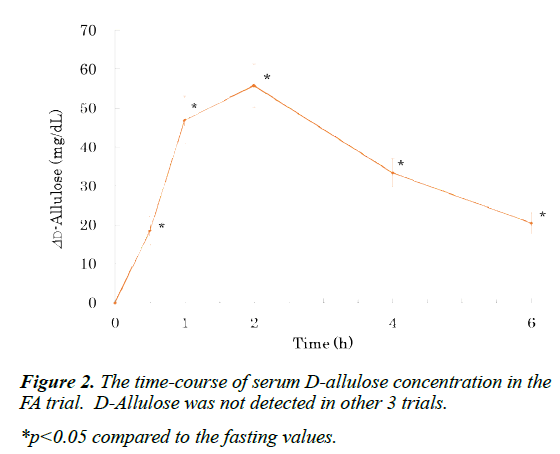 Figure 2. The time-course of serum D-allulose concentration in the FA trial. D-Allulose was not detected in other 3 trials.

Fructose may inhibit the absorption of fat and delay postprandial lipidemia [1]. Fructose is rapidly taken up into the liver without feedback mechanism, and may stimulate the synthesis of TG, eventually leading to the formation of VLDL [15]. This may lead to hypertriglyceridemia and/or fatty liver. Meanwhile, fructose delays the absorption of coingested fat and/or chylomicron formation/secretion. Then, chylomicron from the intestine will compete for lipoprotein lipase with VLDL secreted from the liver, delaying and exacerbating postprandial lipidemia. Repeating the ingestion of fat with fructose has been reported to enhance TG and VLDL synthesis in the liver, and eventually fatty liver or hypertriglyceridemia [16]. D-Allulose may also delay postprandial exogenous lipoprotein metabolism. However, D-allulose, different from fructose, is essentially non-calorie and is not converted to TG and VLDL in the liver. The energy value of D-allulose is <1.6 kJ/g, and in fact, the conversion factor is estimated almost 0 kcal/g [17]. D-Allulose is absorbed largely from the small intestine [17]. And the small amount of D-allulose which reached the large intestine is not readily fermented by intestinal bacteria [17]. Accordingly, D-allulose probably will not cause fatty liver or fasting hypertriglyceridemia. Therefore, we speculate that D-allulose may delay, but not exacerbate postprandial lipid metabolism. However, the duration of experiment, namely 6 h in the present study, may not be sufficient for the observation of the difference between D-alllulose and fructose, and longer experimental period will be necessary.

The metabolism of fructose is different from that of glucose [15]. Fructose transferred into the intestinal lumen is absorbed into the enterocytes through GLUT5. Different from glucose, this process is by facilitated diffusion, does not require ATP hydrolysis, and is independent of sodium absorption. Once absorbed, fructose enters into capillary through GLUT2, then to portal circulation. Most of the fructose released into the portal circulation is rapidly and efficiently taken up by the liver through GLUT2. Part of the fructose taken into the liver is converted into glucose and lactate. Furthermore, some of the fructose will be synthesized to TG, and then secreted as VLDL into the circulation. Although the absorption mechanism of D-allulose has not been elucidated, it will probably be identical to that of fructose. A study using Caco-2 cells showed that D-allulose may be absorbed from the intestinal lumen into enterocytes via GLUT5 and released to the lamina propria via GLU2 [18]. Therefore, D-allulose may be transported into enterocytes probably through a fructose-specific transporter, GLUT5. The recognition of D-allulose and fructose by the same transporters GLUT5 and GLUT2 may be due to the similar structure of D-allulose and fructose under aqueous conditions [19]. Once absorbed, D-allulose is released into the portal circulation. However, D-allulose is zero-calorie, not metabolized, and excreted into the urine [17].

To our knowledge, this investigation is the first to examine the effect of D-allulose on postprandial TG-rich lipoprotein metabolism in humans. However, this study has some limitations. One weak point is that the number of subjects enrolled in the study is relatively small. Another point is that only young females were enrolled in this study. Lipid and lipoprotein metabolism in females is different from that in males, and the present results may not be applicable to males. However, nonfasting TG levels measured 2 to 4 h postprandially has been reported to be associated with incident cardiovascular events (independent of the levels of other lipids) in initially healthy women [20]. Therefore, irrespective of these shortcomings, the finding that D-allulose may delay postprandial TRL metabolism warrants further study. When ingested with fat, D-allulose showed practically no post-prandial glycemic response compared with fructose or sucrose. However, ingesting D-allulose with fat may delay post-prandial lipidemia similar to fructose.