With the Vitamin D deficiency is a major public health problem worldwide. The incidences of Diabetes Mellitus (DM) is increasing prevalence of DM all over the world, it is expected that this disorder will remain as one of the main causes of morbidity and mortality [1-3]. The World Health Organization (WHO), predicts that the global prevalence of Type 2 diabetes increase to 366 million people in 2030 [4]. According to a recent World Health Organization (WHO) report, India with 32 million diabetic individuals, currently has the highest incidence of diabetes worldwide; these numbers are predicted to increase to 80 million by the year 2030 [4,5].

The literature reports revealed [6,7] that Vitamin D deficiency to alter insulin synthesis and secretion and type 2 Diabetes Mellitus. Vitamin D replenishment improves glycaemia and insulin secretion in patients with Type 2 diabetes with established hypovitaminosis D, thereby suggesting the role of vitamin D in the pathogenesis of Type 2 Diabetes Mellitus. The presence of vitamin D receptors and vitamin D binding proteins in pancreatic tissue and the relationship between certain allelic variations in the of vitamin D receptors and vitamin D binding proteins genes with glucose tolerance and insulin secretion have further supported this hypothesis. It is well documented that vitamin D status is important to regulate some pathways related to Type 2 diabetes developments. Because the activation of inflammatory pathways interferes with normal metabolism and disrupts proper insulin signalling, it is hypothesized that vitamin D could influence glucose homeostasis by modulating inflammatory response [8].

Hyperglycemia generates Reactive Oxygen Species (ROS), which in turn cause damage to the cells in many ways. Damage to the cells ultimately results in secondary complications in Diabetes Mellitus [5,9]. Increased oxidative stress is a widely accepted, participant in the development and progression of diabetes and its complications [10]. Many etiological factors including genetic, environmental, lifestyle and nutritional habits have been implicated in the causation of Diabetes Mellitus. There is ample evidence [11-14] that oxidative stress is important risk factors for increased incidence of diabetes associated complications. Therefore, we designed this study to assess the certain oxidative stress markers like by measuring malondialdehyde, superoxide dismutase, reduced glutathione, glutathione reductase, Glutathione Peroxidase (GPx) along with total antioxidant activity in vitamin D deficient newly diagnosed Type 2 diabetics patients of North-West Indian population.

The present cross sectional study was carried out in the Department of Biochemistry, Govt. Medical College Patiala in collaboration with medicine department; Rajindra hospital Patiala on 150 vitamin- D deficient newly diagnosed Type- 2 diabetics (Group-1) and 150 normal healthy subjects (Group-1). The subjects of both groups were taken from rural and urban area of general community of both genders (male and female) in the age ranging of 18-35 years.

The participants of both genders (male and female) in the age range of 18-35 years newly diagnosed type 2 diabetics with fasting blood glucose ≥ 140 mg/dl and Vitamin D deficiency with serum 25(OH)D less than 20 ng/ml with symptoms of Diabetes Mellitus polyuria, polydipsia, fatigue, weight loss and equal numbers of normal healthy subjects (male and female), in same age group ranging from 18-35 years were recruited as control group.

All subjects recruited for the study were vegetarian, non-smokers and non-alcoholic, with no positive family history of diabetes, Cardiovascular Diseases (CVD). Data was obtained from subjects using an interviewer-based questionnaire where the detailed information on their lifestyle, medical history, diet etc. and after obtaining the written consent these were considered for the study. BP was measured 3 times to the nearest of 2 mm Hg in the sitting position, using a mercurial sphygmomanometer and appropriately sized cuffs.

This study was a case control cross-sectional prospective study. This study protocol was approved by the Institution Ethical Committee. A detailed history, physical, and systemic examination, including measurement of height, weight, heart rate, blood pressure in the sitting position, and Body Mass Index (BMI), complete lipid profile, fasting glucose levels was carried out in every subject who entered the study as per a pre-designed proforma for assessing the signs of chronic heart failure, diabetes and also the presence of any exclusion criteria.

Measurements of Anthropometric Parameters: The examination of body weight was done by taking weight in kilogram (kg) and height was measured in centimeters. The BMI was calculated from the formula: BMI = weight in kg/ (height in meters)2.

Blood sampling: A volume of 5 ml of peripheral venous blood was collected by vein puncture using a dry, disposable syringe between 8 and 9 AM after an overnight fast from both groups (Control and newly diagnosed Type 2 diabetic subjects) in potassium oxalate: sodium fluoride vial heparin containing vial. Blood samples were immediately centrifuged at 4000 rpm at 4 °C and plasma was stored at -20 °C until analysis. The 100 μl of RBC were taken and lysed with 2.0 ml ice cold water and the clear lysate obtained after spinning down the cell debris at 8500 g for 10 min at 4 °C was used for various biochemical assays.

3. Estimation of Vitamin D: Serum 25 (OH) D levels was estimated by using a kit supplied by Calbiotech, Inc (USA) based on ELISA method.

6. Estimation of reduced Glutathione (GSH): The level of GSH from whole blood was estimated by applying the method of Giustarini et al. [16].

7. Estimation of glutathione peroxidase (EC 1.11.1.9): The activity of GPx in erythrocytes was estimated spectrophotometrically by applying the method of Paglia et al. [17].

9. Estimation of Total Antioxidant Activity (TAA): Plasma total antioxidant capacity was estimated in plasma by the FRAP (Ferric Reducing Ability of Plasma) assay by applying the method of Benzie and Strain, 1996 [19].

The data was expressed as Mean ± SD and analyzed with the SPSS 16.0.7 statistical software package. Differences between the obese and control subjects were evaluated using the Student’s independent samples t test. Differences were considered statistically significant at P<0.05. 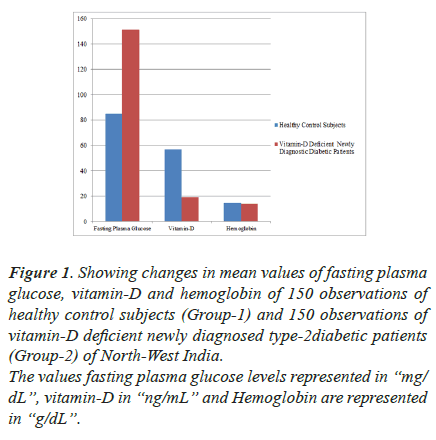 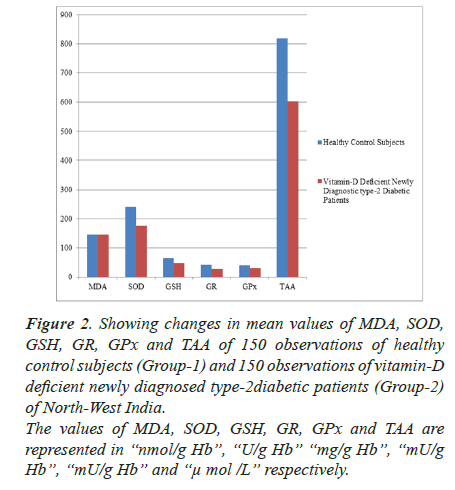 Superoxide dismutase and reduced glutathione and its metabolizing enzymes (GR and GPx):

A significant increase (P<0.001) by 61.07%) in MDA (representing the lipid peroxidation) levels in newly diagnosed type 2 diabetic patients was seen in comparison to healthy control individuals (Figure 2). Lipid peroxidation causes polymerization of membrane components and induces changes in the membrane permeability resulting in hemolysis, would relate to the degree of intravascular Red Blood Cell (RBC) destruction. Extravascular mechanisms of RBC destruction may involve changes in cell deformability and antigenicity. Previously, from our own laboratory, we reported that newly diagnosed Type-2 diabetic patients of North-West India are suffering with dyslipidemia [20]. Our observation of significantly increased malondialdehyde levels and hyperlipidemia is agreement with the literature reports and to decrease the membrane fluidity, deformability, visco-elasticity and life span of erythrocytes in the study group [21-24], which might be responsible for the initiation of complications such as diabetes, hypertension etc. in newly diagnosed type 2 diabetic patients later on in the north western Indian population.

Superoxide dismutase, a superoxide radical scavenging enzyme is considered the first line of defense against the deleterious effect of oxygen radicals in the cells and it scavenges reactive oxygen radical species by catalyzing the dismutation of O2- radical to H2O2 and O2 [25-28]. A significant decrease by 26.14% in SOD activity in newly diagnosed type-2 diabetics (Figure 2) may results in an increased flux of O2.- radical and hence reflects the tissue damage/injury.

Glutathione (GSH), a tripeptide is maintained in reduced state by an efficient glutathione peroxidase/glutathione reductase system. Glutathione is a potent endogenous antioxidant that helps to protect cells from a number of noxious stimuli including oxygen derived free radicals [27,29,30]. In the present work, the level of glutathione significantly decreased by 26.14% (P<0.05) in newly diagnosed Type-2 diabetics patients with compared to healthy control subjects (Figure 2). A significant fall in GSH levels, confirm an increased susceptibility to oxidative damage. The activity of GPx, a seleniumcontaining enzyme was found to be decreased by 25.41% (P<0.01) in newly diagnosed type-2 diabetics patients in comparison to healthy control subjects (Figure 2). Glutathione peroxidase catalyzes the reduction of variety of hydrogen peroxide (ROOH and H2O2) using glutathione as a substrate, thereby protecting mammalian cells against oxidative stress [31]. The significant inhibition (P<0.001, 32.04%) in the activity of GR in newly diagnosed Type- 2 diabetics patients (Figure 2) attributed to increased oxidation or decreased synthesis of GSH. The less availability of NADPH may also cause a decrease in GR activity [32]. Our observations of significant reduction in GSH levels are is an agreement with the literature reports that inverse relationship exists between MDA and GSH status, can impair the cell defense against the toxic action of xenobiotic and may lead to cell injury/death [30]. A significant decrease in GPx activity may render the tissue more susceptible to LPO damage. Accordingly, in the present work, we observed a significant decrease in GPx activity upon increase in MDA level. This observation is in accordance with the hypothesis that MDA and GPx might play a role in tissue damage [33-36] that oxidative stress is induced in the newly diagnosed Type-2 diabetics patients. Our observations of significant decrease (P<0.001) in total antioxidant activity by 35.85% in vitamin-D deficient newly diagnosed type 2 diabetic patients w. r. t. healthy control subjects further suggested that oxidative stress induced in the newly diagnosed Type-2 diabetics patients (Figure 2).

Aforementioned observations suggested that vitamin-D deficient newly diagnosed Type-2 diabetic patients of North Indian Punjabi population are associated oxidative stress, hallmark of various diseases such as Diabetes Mellitus, cardiovascular diseases, osteoporosis etc. Therapeutic interventions in combinations, lifestyle and dietary modification might be beneficial to increase the vitamin D levels and hence to reduce oxidative stress should be included as a part of treatment to prevent further risk of development of Diabetes Mellitus and other various cardiovascular diseases like atherosclerosis in North- West Indians.

Authors would like to acknowledge Department of Medicine, Govt. Medical College and Rajindra Hospital – Patiala, India for recruitment of vitamin D defiant newly diagnostic patients for this study.

The author received no financial support for the research, and/or publication of this article.

Author declared no potential conflicts of interest with respect to the research, authorship, and/or publication of this article.