Effect of using Jojoba and Moringa protein concentrate as a fat mimetic on physical and sensory properties of cupcake.

This research study was primarily conducted for the purpose to examine the Jojoba and Moringa protein concentrate as a fat mimetic on physical and sensory properties of cupcake. Fat replacers can be used to help decrease the amount of fats used in cooking; therefore, these health risks can be reduced. This study showed that Sensory quality was assessed by ten experienced panelists from Desert Research center, using attributes such as bread taste, flavor, firmness, softness, crumb and crust colors, appearance and overall acceptability. Principal components and cluster analyses confirmed two groupings of treatments with Jojoba and Moringa protein concentrate as a fat mimetic. It is concluded that treatments with 25% and 50% fat replacement were tastier and more acceptable. Finally, Jojoba and M. olifeira protein concentrate presented good functionality for utilization in food formulations.

Now-a-days people are very particular about their relation between diet and health and more over they prefer food of low calorie which is healthy to the body. Usually for any occasion cakes are preferred first and which always been the children favourite food. Apart from the diet foods, cakes, burgers, pizzas, etc. are playing major role in the eatables. In return they are causing diseases such as constipation, tumours and heart attacks. In order to prevent the major health problems right food at right time must be taken. Proteins which paly major role in the diet. Essential proteins are not synthesized from our body they are consumed through taking vegetables, fruits, etc. whereas nonessential proteins are synthesized in body itself. Deficiency of proteins causes the serious problems such as malnutrition (marasmus and kwashiorkor) plant proteins are preferred first because they worth low and effective compared to animal protein [1].

On other hand fat contributes to flavor, or the combined perception of mouthfeel, taste, and aroma/odor. Fat additionally contributes to thickness, appearance, taste property, texture, and lubricity of foods and will increase the sensation of fullness throughout meals. Fat replacers are categorized into two types which are Fat substitutes and fat mimetis Fat substitutes are similar to fats which replaces triglycerides in food. Particular examples of fat substitutes are sucrose polyesters, which cannot be digested in small intestine and are passed directly into large intestine. Fats Mimetics can be carbohydrates or proteins and can replace fats in foods because of their textural organoleptic properties. Beside fats dietary fiber is believed to have positive effects on Human Nutrition and Human Health. And anyway, high intake of food which is rich in of dietary fiber is associated with lower risk of many diseases such as chronic bowel diseases, coronary heart diseases, and a various types of cancer [2].

Jojoba (Simmondsia chinensis (Link) Schneider) is an oil yielding desert shrub (family Simmondsiaceae) of arid and semi-arid areas [3]. Commercially Jojoba is grown for its oil which having lubricating properties. Besides being known for its lubrication, Jojoba has attracted interest towards, cosmetics, pharmaceuticals, animal feeding, and landscape as soil conservation [4]. Jojoba seeds have also been used in cleaning of aquatic system mainly for the removal of access ferric ions [5]. After oil extraction its defatted meal, represent a potential supplement for animal feeds. Once defatted, the major constituents of it are proteins (31%) and carbohydrates (55%) [6].

Jojoba industry faces the challenge of finding ways to improve productivity and quality of the products. There are number of different Jojoba accessions which are grown in Jojoba farms. This is mandatory to comparably evaluate them for its commercially important chemical properties [4].

Moringa oleifera (Moringaceae), which is fast growing tree and has fragile branches, tripinnaye leaves. They grow in semiarid and tropical regions. They are used in herbal medicine and pharmaceutical cosmetics too. They are given to infants and nursing mothers to fight malnutrition. The relative lack of anti-nutritional elements and also the high macromolecule, super-molecule Associate in nursing sulphur containing organic compound contents encourage the employment of Moringa seed as an animal feed. It’s a wonderful supply of proteins for monogastric animals. The inhibitor action of some compounds gift within the plant, one amongst the foremost necessary physiological roles of food, will defend organisms against the hurtful effects of oxidization.

Thus, the aim of this study were to research the practicableness of victimization the Jojoba and Moringa super molecule concentrate as a fat mimetic and to check its result on physical and sensory properties of cake. For this purpose, seven different formulations were examined which was the control cake (without protein concentrate) and cake with fat replacement of 25, 50 and 75% w/w.

The following procedure was adopted by the researcher for the purpose to reach at certain findings and conclusion.

The concentrates from pressed meal were prepared according to methods described [7]. A pressed cake (meal) was obtained from a press operation and extracted with hexane until the solvent was no longer colored. The defatted meal was spread out in trays to dry overnight at 20°C. the defatted meal was subsequently ground with a hammer mill through 60 mesh screens. Protein concentrate were obtained by extracting the defatted meal with hexane solvent (1:20, w/v) at 20°C. SDI (spray-dried concentrate I) was obtained after washing the meal with methanol / acetone (3:1) and by rewashing SDI protein concentrate with a solution of methanol and IN HC1 (98:2) (SDII).

All formulas of substituted wheat flour at different substitution levels by both protein concentrates were summarized in Table 1. The processing method of cupcake was taken typically according to AACC [8] in steps sequence as: The shortening was melted thoroughly; sugar and salt were added then mixed vigorously. The whole egg was mixed with vanilla and whipped until got puff and smooth like-cream texture. Additionally, substituted wheat flour (72% extraction) with baking powder and skimmed milk powder then added gradually to whipped egg mixture. This mixture was mixed gently until got homogenous dough using Hand mixer (MK-H4-W, Panasonic Co). After getting appropriate texture the dough was poured into paper cups and backed at 180°C ± 5°C for 30 to 35 min. The baked cupcakes were cooled down at room temperature, and then packed into aluminum foil bags intervals for analysis. Six fat mixes were prepared from Jojoba protein with shortening and Moringa protein with shortening as shown in Table 2.

Table 2: Formula of the cupcakes.

Water, protein, fat, crude fiber, ash, contents of the raw materials and the cupcakes were determined according to the methods of AOAC [9]. Total carbohydrates (TC) were calculated by difference.

2-4 Amino acids: Amino acids were determined using a BECKMAN 6300 amino acid analyzer according to the method of Spackman [10]. Hydrolysis of samples was performed in the presence of 6 M HCl, trifluoroacetic acid (TFA, 2:1, v/v) and 5% thioglycolic acid, for 24 h at 100°C prior to amino acid analysis.

2-5 Physical characteristics: The normal weight of baked cupcakes was individually determined within 1 h after baking. Also, volume in different substituted cupcakes was determined by method according to AACC [11] and specific volume was calculated for these formulas [Volume (cm3)/Weight (g)]. 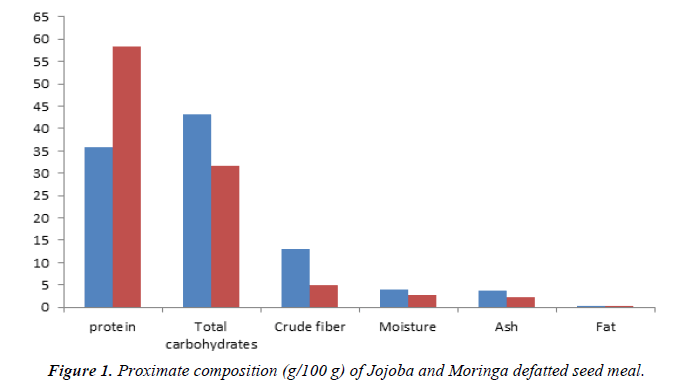 Tables 5 and 6 presents the values of the chemical analysis of cupcakes. The moisture content found increased in the cupcake with Jojoba and Moringa protein concentrate with a significant difference at p<0.05. Therefore, that absorption of water by the protein concentrates generally increased with temperature increased, the results revealed that the water absorption increased with the increasing levels of protein concentrate [25-29]. The determination of moisture is one of the most important measurements and is used in food analysis because it is related to its stability, quality and composition, and can affect the storage, packaging and processing.

Data are presented as means ± SD (n=3) and Means within a column with different letters are significantly different at (P ≤ 0.05)

Data are presented as means ± SD (n=3) and Means within a column with different letters are significantly different at (P ≤ 0.05).

The effect of Jojoba and Moringa protein concentrate on cupcake physical properties was considered, data were illustrated in Table 7. Increasing of Jojoba and Moringa protein substitution level increased weight property. Accordingly, increasing either Jojoba or Moringa protein concentrate levels could bind more water led to increasing weight. Volume of cupcakes is affected by various factors such as quality of flour, type of ingredients and processing conditions. As for volume and specific volume characteristics, significant differences (p<0.05) were exhibited between all cupcakes [30-33]. The mean values for the volume of cupcakes indicated that the maximum value for volume was observed in control sample (107.35 cm3) followed by Jojoba 25 and Moringa 25 while the minimum value was observed in Jojoba 75 and Moringa 75. Increasing protein concentrate levels could lead to decrease the volume and specific volume thinks to influence on gluten net with low strength and gas retention.

Means sharing the same letter in a column are not significantly different.

Table 7: Correlation of Origin of degree of the participants and implementation of TMC.

According to Table 7, the sample containing 75% concentrate protein from Jojoba and Moringa had the lowest specific volume. It should be noted that not only proteins have the ability to be a suitable fat replacer, but also they have the ability to strengthen the cell walls and do not allow the walls to be torn. The important point is that if we use excessive amount of additives in the formulation, it may hamper the air bubbles expansion during baking process due to the excessive increase in the strength of the their wall and therefore, not only there is no increase in volume of the final product texture, but also the texture is hard and compressed. In this study, the high levels of concentrate protein caused the same problem in low-fat cupcake. 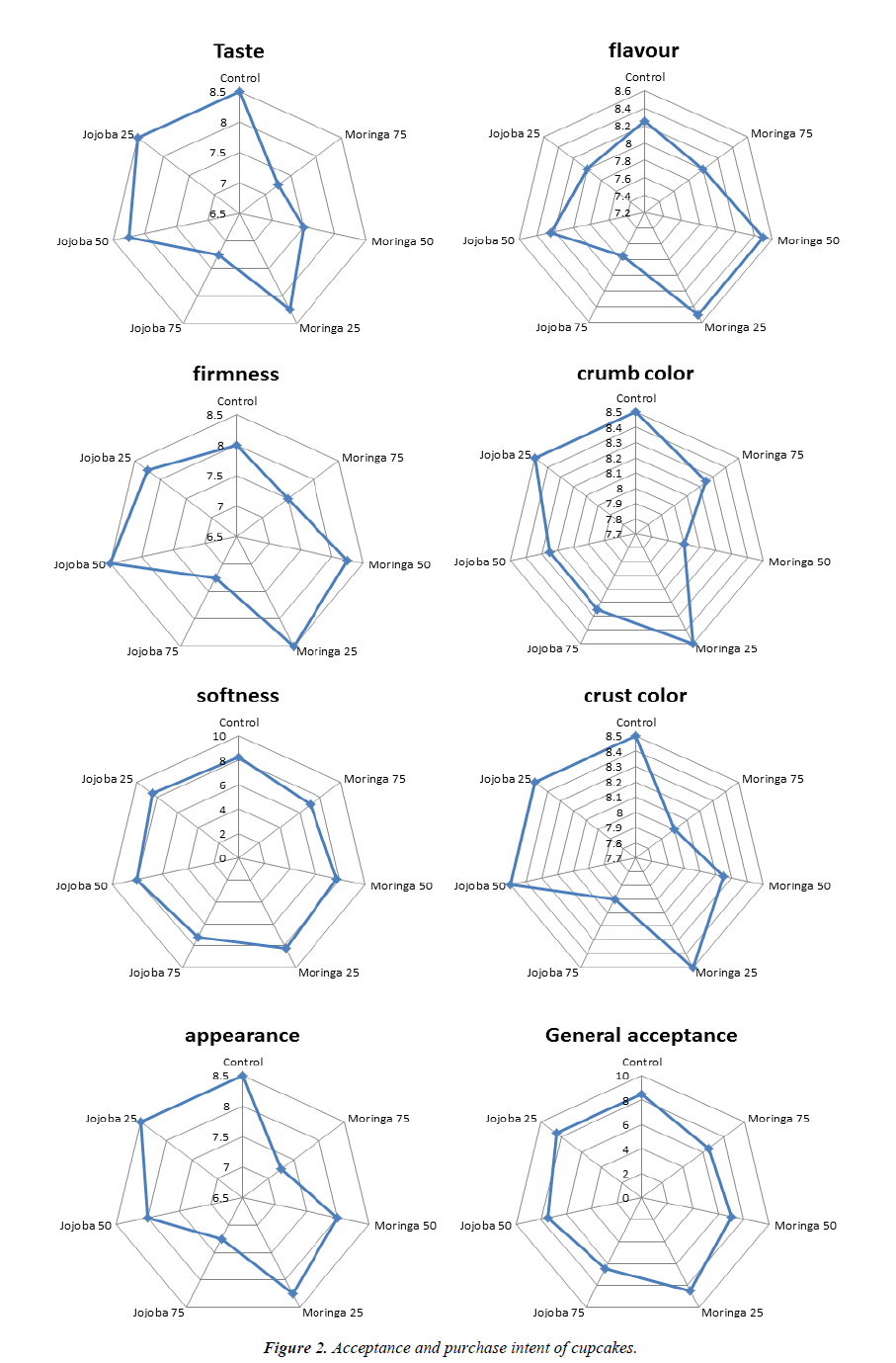 According to the results of the evaluation of the texture of the low-fat cupcake samples, the sample containing 25% and 50% Jojoba and Moringa concentrate protein were given the high score on their texture qualitative properties, because this sample had the lowest amount of texture hardness than other samples. It was predicted that the sample containing 75% protein of Jojoba and Moringa receive the lowest scores regarding their softness and hardness.

According to results, the high overall acceptability was given to the sample containing 25% and 50% Jojoba and Moringa protein concentrate. Thus, since these two samples had the highest score in many parameters, it was expected that compared with other produced samples, their overall acceptability scores be at the highest level and the panelists introduced these two samples, as the samples of low-fat cupcake with high acceptable characteristics from the perspective of the consumer.