Effect of Tripterygium wilfordii on LPS-induced acute lung injury and quantitative determination of its active constituents.

Tripterygium wilfordii Hook. F is a plant in the genus Tripterygium of the family Celastraceae, which has the actions of dispelling wind and eliminating dampness, promoting blood circulation and dredging meridians, dispersing swelling and alleviating pain, removing toxicity and killing parasites, it has been widely used in the treatment of rheumatoid arthritis, glomerulonephritis and various dermatoses, at present, its main medicinal part is the peeled root [1]. The major active constituents of Tripterygium wilfordii crude drug are alkaloids (wilforgine, wilforine), diterpenes (triptolide, triptonide), triterpenes (tripterine, wilforlide), etc., of which triptolide is the main constituent with pharmacodynamic and toxic properties in Tripterygium wilfordii [2,3].

Acute lung injury (ALI) is a common clinical syndrome caused by severe infection, trauma, shock, poisoning and other intrapulmonary and extrapulmonary diseases; it has high morbidity and mortality, and is usually manifested as acute progressive dyspnea and refractory hypoxemia. Systemic inflammatory response and oxidative stress are both involved in and mediate the incidence of ALI [4]. Alkaloids are one of the main active constituents of Tripterygium wilfordii, which have broad pharmacological activities; a study [5] has proved that alkaloids from Tripterygium wilfordii have good anti-lipid peroxidation and anti-inflammatory effects. In this experiment, rat model of endotoxin-induced ALI was used to study the anti-inflammatory and antioxidant effects of Tripterygium wilfordii extracts; meanwhile, the mechanism of its anti-inflammatory effect was explored.

Tripterygium wilfordii was purchased from the Original Herbal Medicine Division of Yunnan Baiyao (batch number: 201302036), which was identified by the Wuhan Institute of Botany, Chinese Academy of Sciences as Tripterygium wilfordii Hook. F. Crude drug of Tripterygium wilfordii was soaked in ethanol for 6 h, extracted three times under reflux with ethanol, with each time lasting 4 h, the ethyl acetate extracts were combined, and ethanol was removed to give ethanol extract, the ethanol extract was then extracted with ethyl acetate, and ethyl acetate was removed to give an extract, which was prepared to the required concentrations with DMSO during the experiment [6]. Dexamethasone was purchased from Shanghai Luda Pharmaceutical Co., Ltd., (batch number: 110209); lipopolysaccharide (LPS) was purchased from Sigma, USA.

Preparation of animal model and grouping

The 120 rats were randomly divided into six groups, namely the normal control group, model group, dexamethasone group, and Tripterygium wilfordii extract low-, medium- and high-dose groups, n = 20 in each group. On the first 3 d of the experiment, the rats in the Tripterygium wilfordii extract low-, medium- and high-dose groups were administered ip at daily doses of 100, 150 and 200 mg/kg once daily, control group and model group were administered ip with 2 mL/kg normal saline, and dexamethasone group was administered ip at 5 mg/kg 1 h before model establishment. 1 h after the last administration, rats in each treatment group were administered ip with 5 mg/kg LPS, after model establishment, general state of the rats in each group was observed, 6 h later, rats in the model group presented respiratory distress, with hemorrhagic secretion from mouth and nose.

All animals were anesthetized by giving 50 mg/kg sodium pentobarbital, ip, 6 h after model establishment. Tracheal intubation was performed, and bronchoalveolar lavage was performed with three 3 mL aliquots of normal saline, the bronchoalveolar lavage fluid (BALF) was then collected and centrifuged. Supernatant protein concentration was determined by Coomassie brilliant blue staining. After the precipitated cells were destroyed with red blood cell lysing buffer, white blood cell (WBC) was counted under an optical microscope. Chests of rats were cut open and 200 mg of left lungs were removed, which were made into 10% homogenate in an ice bath, centrifuged at 2500 r/min at 4°C for 15 min, then the supernatant was taken to detect the level of inflammatory factor MDA, as well as SOD and MPO activities.

Right lower lungs were removed and fixed in 10% formalin, paraffin-embedded, and sliced, followed by determination of NF-κB p65 expression by immunohistochemistry.

10.0 mg of tripterine reference substance was accurately weighed, dissolved in methanol, and diluted to the mark to prepare a 2.0 mg/mL reference stock solution.

About 0.2 g of Tripterygium wilfordii extract (sifted through a 40-mesh sieve after crushing) was accurately weighed, placed in a stoppered conical flask, added precisely with 50 mL of methanol, then stopped, weighed, and ultrasonically extracted for 30 min. After the lost weight was replenished with methanol, the solution was shaken well, and filtered to give the test solution.

Each 0.1 mL of reference and test solutions was taken, and evaporated to dryness in a water bath at 100°C. Then, each was added with 0.8 mL of 5% vanillin-glacial acetic acid solution and 2 mL of perchloric acid, shaken well, and heated in a 70°C water bath for 45 min. After removing and cooling in tap water for 5 min, the solutions were added with 5 mL of glacial acetic acid, shaken well, and reacted. 10 min later, the solutions were placed in a cuvette, and scanned between 200-800 nm with glacial acetic acid as the blank solution. The results showed that the absorptions of reference substance and test sample were both larger at 538 nm, so 538 nm was selected as the detection wavelength.

Appropriate amount of tripterine reference substance was accurately drawn, dissolved in methanol, and diluted quantitatively to prepare standard solutions with concentrations of 100.0, 115.0, 130.0, 145.0, 160.0 and 175.0 mg/L, followed by measurement of absorbance at 538 nm. Regression equation of tripterine was obtained with absorbance as ordinate and concentration as abscissa as y = 3.4329x-0.0121, r = 0.9997.

Tripterine reference solution was taken, and determined repeatedly for six consecutive times. RSD was calculated to be 0.28%, which indicated the good accuracy of instrument.

The prepared Tripterygium wilfordii extract test solution was taken, and measured for absorbance at 0, 10, 20, 30, 40, 50 and 60 min, respectively, to investigate the colori metric stability within 60 min. Results revealed that RSD was 2.12% (n = 7) at 60 min, indicating the good colorimetric stability of sample within 0-60 min.

Tripterygium wilfordii crude drug was taken, prepared into six parallel test solutions, and measured for absorbance at 538 nm. RSD was calculated to be 2.06% (n = 6).

Six aliquots of Tripterygium wilfordii extracts were prepared into test solutions by addition of tripterine reference substance the same in amount as the test sample, and measured for absorbance at 538 nm. Sample recovery was calculated to be (97.314 ± 2.623)% (RSD = 2.78%). 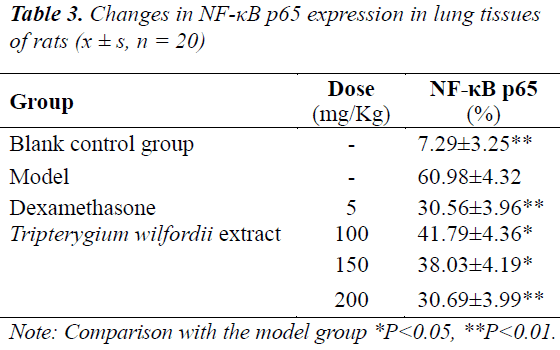 Effects on TNF-α, IL-6 and IL-10 in lung tissues of rats with ALI

LPS-induced acute lung injury is often accompanied by the release of inflammatory cytokines and inflammatory response [7], which cause infiltration of neutrophils, and release of oxygen free radicals, proteases and other inflammatory mediators, protein concentration in BALF can reflect the permeability of epithelial cells and degree of pulmonary edema [8], lung tissue MPO reflects the number of neutrophils, and indirectly reflects the degree of local neutrophil infiltration in lung tissues, BALF WBC count and lung tissue MPO index can indirectly reflect the amounts of neutrophil infiltration and accumulation in the lung. In this experiment, 6 h after the induction of rat model of LPS-induced lung injury, the protein content and WBC count in BALF, and lung tissue MPO activity were all significantly higher than the blank control group, which can fully demonstrate the successful establishment of animal model in the present experiment.

Currently, it is believed that in the development and progression of ALI, a large number of different proinflammatory cytokines are produced in local lung tissues, which form a complex cytokine network, thus causing complex inflammatory responses [9]. Among them, NF-κB p65 is a protein factor with pleiotropic transcriptional regulation; up-regulation of its activity can activate factors such as TNF-α and IL-6, and produce a variety of inflammatory substances [10]. Increased amount of TNF-α can promote neutrophil exudation, phagocytosis and release of oxygen free radicals, and induce alveolar epithelial cells to produce other pro-inflammatory cytokines [7]. While endogenous and exogenous IL-10 have a protective effect on ALI caused by several different causes, and improve the survival of animals. Therefore, IL-10 level is directly associated with the severity of the inflammatory response [11].

This experiment shows that Tripterygium wilfordii extract can lower BALF levels of albumin and WBC, reduce alveolar-capillary membrane permeability, and improve the degree of pulmonary edema. Tripterygium wilfordii extract can promote the expression of SOD, improve the free radical scavenging capacity in rats, and has a protective effect on oxidative stress in LPSinduced lung injury model rats. This study shows that Tripterygium wilfordii extract can effectively inhibit NF-κB p65 expression, decrease the production of proinflammatory factors such as TNF-α and IL-6, and increase the level of IL-10, effectively inhibit the release of mediators such as oxygen free radicals, lipid metabolite MDA and MPO, suppress inflammatory responses in many ways, and reduce the degree of lung injury.

In summary, Tripterygium wilfordii extract can decrease the pulmonary vascular permeability caused by LPS-induced ALI, reduce inflammation exudation, and lower the degree of oxidative stress injury. The mechanisms of its actions may be associated with downregulation of NF-κB p65 expression, reduction of antiinflammatory cytokines such as TNF-α and IL-6, reduction of metabolites such as MPO and MDA, and increase of SOD expression.