During pulmonary inflammation increased amounts of reactive oxygen species (ROS) are produced as a consequence of a phagocytic respiratory burst. One of the manifestations of these free radical mediated processes is lipid peroxidation. Study was under taken to evalu-ate the level of lipid peroxidation product malondialdehyde (MDA) and levels of antioxi-dants like vitamin C, vitamin E with total antioxidant status in patients with active pulmo-nary tuberculosis (PTB). Fifty patients with positive sputum for acid fast bacilli (Ziehl Neel-sen (ZN) staining) were divided into two group and 25 healthy controls without any disease were included for this study. 25 patients with active pulmonary TB were treated with Anti tuberculosis therapy (ATT) and remaining 25 cases were treated with antioxidants as an ad-juvant therapy along with ATT. Serum levels of MDA, Vit.C, Vit.E and total antioxidant status were measured .Our results showed significantly decreased level of MDA and in-creased levels of Vit.C, Vit.E and total antioxidant status after six month follow up of anti-oxidants supplementation along with ATT. This study concludes that antioxidants (micro-nutrients) supplementation as an adjuvant therapy helps in reduction of oxidative stress and promotes recovery of patients.

Tuberculosis (TB) is a global public health problem and it is second to HIV/AIDS as the leading infectious cause of death of adults worldwide [1]. Tuberculosis or TB is an infectious disease caused by acid fast bacillus, Mycobacterium tuberculosis (MTB) in humans [2].Tuberculosis most commonly affects the lungs, where it is called pulmonary tuberculosis (PTB). In lungs, it forms a localized infection after inhalation of bacilli [3]. It can also affect extra pulmonary organs like lymph nodes, bones, joints, subcutaneous tissue, meninges, eyes, kidneys and gastrointestinal tract, where it causes an insidious disease that develops without striking clinical evidence [4].

World Health Organization declared TB to be a global emergency in the year 1993 [5]. India is the highest TB burden country accounting for one fifth of the global incidence. Global annual incidence estimate is 9.1 million cases out of which it is estimated that 1.9 million cases are from India. India is 17th among 22 High Burden Countries (HBC) in terms of TB incidence rate [6].

MTB is a recognized facultative intracellular bacteria that replicates and persists within macrophages [7]. MTB can induce reactive oxygen species (ROS) production by activation of macrophages [8-10], which is an important part of host defense against mycobacterium. But generation of ROS may promote tissue injury and inflammation in affected individual. This further contributes to immunosupression [11,12], particularly in those with impaired antioxidant capacity.

Fifty outpatients with newly diagnosed active PTB in the age group of 15-60 years and 25 age and sex matched healthy control individuals were selected from Dr. V. M. Govt. Medical College and Chatrapati Shivaji Maharaj Sarvopchar Rugnalaya, Solapur and Terna hospital and research center, Nerul, Navi Mumbai. Present study was approved by institutional ethical committee and selected subjects were informed about this research project and included in the study with their consent and without any economical burden to them.

Patients with renal diseases , endocrine dysfunction, hepatic diseases, diabetes mellitus, extra pulmonary TB, drug resistance at the baseline or during the follow up study, PTB with HIV/AIDS infection, non tuberculous pulmonary infection, pregnancy, previous history of treatment of tuberculosis, viral or bacterial infections, hypertension, chronic alcoholic etc were excluded from the study. Patients who did not take their medication regularly were also dropped from the study.

Subjects were grouped as follows:

Antituberculous treatment was given as per the guideline of Revised National Tuberculosis Control Programme (RNTCP) and DOTS strategy and doses were adjusted as per body weight of patients.

Under all aseptic precautions, 5 ml fasting venous blood sample was collected in plain bulb from all the control and PTB patients at baseline i.e. before starting anti tuberculosis treatment and after 7th day, 1st , 2nd ,3rd and 6th months of ATT. Blood samples were centrifuged at 5000 rpm for 10 min and serum was separated after clot retraction. The serum was analyzed at the earliest for levels of Malondialdehyde (MDA) [13], Vitamin C [14], Vitamin E [15] and Total Antioxidant Status (TAS) [16] on the same day.

The results were compiled and the statistical analysis was done by using ‘T’ test. Values were expressed as mean ± standard deviation (SD).

Above results show better improvement in group III (ATT + antioxidant supplementation) as compared to group II ( ATT only) after six months of treatment. This helps in outcome of patients and reduction in oxidative stress. 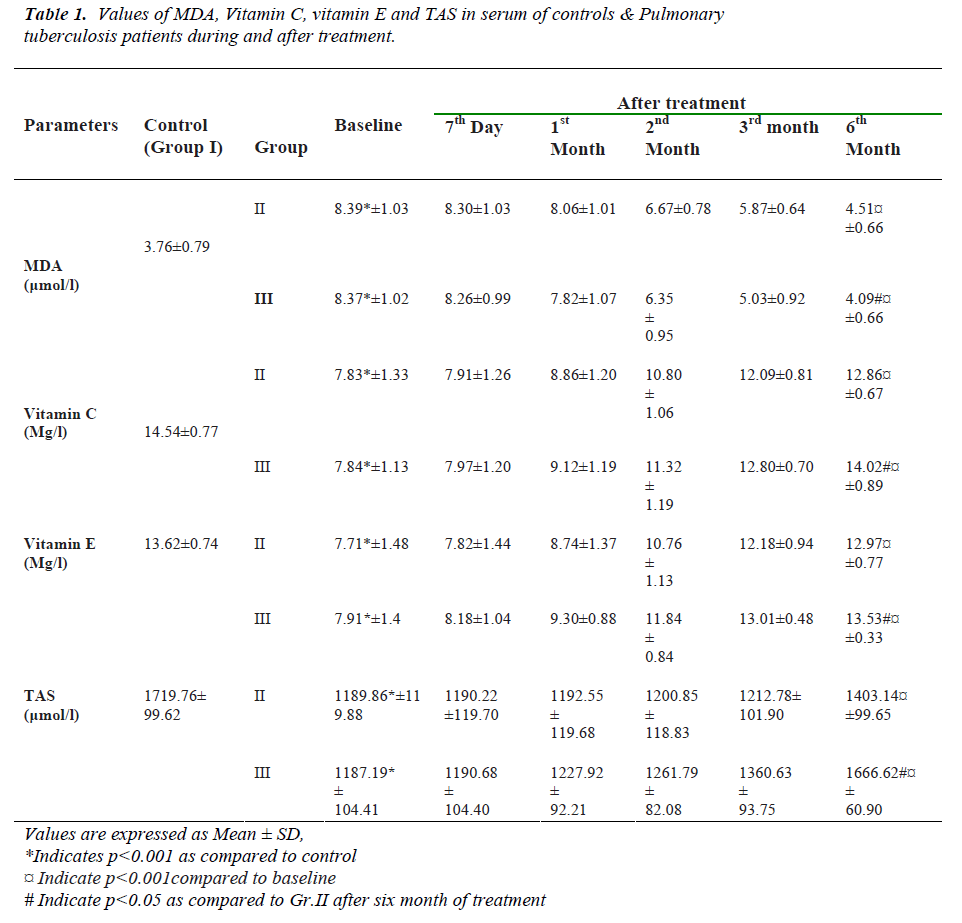 Table 1: Values of MDA, Vitamin C, vitamin E and TAS in serum of controls & Pulmonary tuberculosis patients during and after treatment.

Tuberculous bacilli induce oxidative substances such as reactive oxygen species (ROS) derived from free radicals, which in turn can promote tissue injury and inflammation. ROS are highly toxic to all types of cells, but especially to lipids (fat cells) causing peroxidation.This results in damage to cell membrane which promotes lung fibrosis and dysfunction in pulmonary TB [17]. Antioxidants scavenge free radicals and suppress the actions of ROS and thus protect the host from tissue inflammation. Ascorbic acid and alpha tocopherol act as potent and probably the most important hydrophilic and lipophilic antioxidants respectively. Reduced levels of vitamin C and E are associated with an impaired immune response [18].

In many studies, concentration of MDA, product of lipid peroxidation was found to be significantly Higher [19, 20] and vitamin C [20-22], E [20-22] and TAS [23, 24] significantly lower in newly diagnosed tuberculosis patients than healthy controls and associated with clinical severity. There is inverse correlation between MDA and Vitamin C and E levels. These results show an imbalance between free radicals and antioxidants in tuberculosis patients. Our findings are also same as above.

Janiszewska et al. showed that plasma MDA concentration in patients with pulmonary tuberculosis were significantly higher before and after 1 month and 2 months of treatment with antituberculosis drugs in comparison to the control group [25].

Lamsal et al. [26] observed serum MDA and nitrite levels were significantly higher (p=0.0001) and plasma levels of vitamin C and E were significantly lower (p==0.001) before commencement of ATT in sputum smear positive cases of pulmonary tuberculosis than controls. But serum MDA and nitrite levels decreased significantly and plasma level of vitamim C significantly increased after 2 months of ATT as compared to before ATT. No change was observed in plasma vitamin E before and after ATT. He suggested elevated levels of MDA and nitrite with concomitant depressed vitamin C and E levels before commencement of ATT indicative of lipid peroxidation and oxidative stress. But our results show serum level of Vitamin C as well as E significantly increased and level of MDA decreased significantly after six months of antioxidants supplementation. This helps in the outcome of tuberculosis patients. The response of immune system to tuberculosis infection depends critically on interaction between monocytes, macrophages, T cell lymphocytes and various cytokines released by them. Micronutrients (A-Z tablet) may improve T-cell mediated immune response in the body. This is accomplished by increased production of interleukin-2 (IL-2) leading to increased proliferation of T- cells. This also reduces production of Prostaglandin-2, T-cell suppressive factor. Micronutrients protect cells from deleterious effects of free radicals generated during disease conditions or natural body metabolism. In pulmonary TB patients micronutrients increase effectiveness of ATT which helps in reducing lesion area in lung and improves the outcome of patients.

Total antioxidant status (TAS) of an individual is a function of dietary, enzymatic and other systemic antioxidants and is therefore an indicator of the free radical load. Some researchers observed that total antioxidant status in tuberculosis patients was lowered significantly as compared to control and level rises during and after ATT [23, 24]. Reddy et al. [27] reported that the serum level of TAS was significantly low in untreated and under treatment patients of tuberculosis in comparison to normal healthy volunteers. Level of TAS gradually increases following ATT. However, our result shows better improvement after antioxidants supplementation as an adjuvant therapy.

This study showed increased level of MDA and decreased levels of non enzymatic antioxidants i.e. vitamin C (water soluble) and E (lipid soluble) and TAS in tuberculosis patients as compared with controls .This indicates oxidative stress in TB patients. However, antioxidants supplementation for six months as an adjuvant therapy increases the levels of vitamin C and E as well as TAS and lowers the MDA level. This suggests that antioxidants supplementation reduces oxidative stress, effectiveness of ATT and helps in outcome of tuberculosis patients.

I am thankful to Mr. Behera Abhiram for his help in statistical calculations. I also would like to acknowledge the kind cooperation extended by the staff of biochemistry, TB and Chest and PSM department of Dr. V. M. Govt. Medical College, Solapur and TPCT’s Terna medical college, Nerul Navi Mumbai.