Drusen are known to be the hallmark that predicts progression of Age-related Macular Degeneration (AMD). It is well studied that large drusen over 125 μm, pigmentary abnormality, and medium drusen 63-125 μm provide an increased risk of AMD progression toward late AMD, namely neovascular AMD and geographic atrophy, especially in Western populations. There are several racial and ethnic differences well recognized in AMD. The prevalences of drusen are lower in Asia than those in Western countries. In contrast, neovascular AMD is more frequently seen rather than atrophic dry AMD in Asians. Here we review the current understanding and epidemiology of drusen and other retinal/choroidal features predicting their progression to late AMD and also summarize our recent study. Thick choroid may be a unique feature of part of AMD, which is often found in Asians. To be noted, pigmentary abnormality rather than soft drusen was more associated with “pachychoroid”, which is accompanied by the dilated choroidal vessels and their hyperpermeability, leading to the formation of PCV, a special type of macular neovascularization commonly seen in Asians.

Age-related Macular Degeneration (AMD) is the leading cause of visual impairment affecting individuals over the age of 50 worldwide. It is well known that the existence of macular drusen indicates an increased risk for progression to late AMD, neovascular AMD (nAMD) and geographic atrophy [1,2]. Choroidal Neovascularization (CNV) occurs as a creation of new vessels originating from the choroidal vasculature in nAMD, whereas a progressive loss of retinal tissue including photoreceptors, RPE and choriocapillaris leads to the central vision loss in geographic atrophy. Histologically, drusen were observed as the extracellular amorphous debris accumulating between the basolateral basement membrane of Retinal Pigment Epithelium (RPE) and the underlying choroid [3,4]. Of note, the size and number of drusen has been shown to be predictive factors in AMD progression. The Age-Related Eye Disease Study (AREDS), major clinical trials sponsored by the National Eye Institute, showed that large drusen >125 μm and pigmentary abnormality provide a marked increased risk of 5- year rate of developing advanced AMD [1]. Additionally, further analyses clarified the risk of medium drusen 63-125 μm as well; medium drusen alone, without pigmentary abnormality, provided an increasing risk of progression to late AMD [2,5]. In contrast, drusen <63 μm indicated no clinically relevant increased risk of late AMD so that they were considered as normal aging processes. Hence, medium drusen were defined as early AMD while pigmentary abnormality and/or large drusen were intermediate AMD [2].

Several studies have indicated that there are lower frequencies of drusen in Asians compared with Western populations [6]. Indeed, racial and ethnic differences are well recognized in AMD epidemiology [7]. For instance, the prevalence of nAMD in Asian populations is apparently more frequent than those of Western populations [8,9]. Instead, the atrophic/dry form of AMD, drusen and geographic atrophy, is more often seen in Western populations. Furthermore, Polypoidal Choroidal Vasculopathy (PCV), a special type of CNV in AMD, is known to show a higher frequency in Asians compared with Western populations [9,10]. As mentioned, drusen size and/or pigmentary abnormality constitute the threshold to diagnose AMD stages [1,5,11,12]. However, most of previous studies in Asian cohorts did not refer to medium drusen so that there was limited information on medium drusen and AMD development in Asians [13-15].

Central Serous Chorioretinopathy (CSC) and a part of AMD have been considered to be the Pachychoroid Spectrum Disease (PSD), which involves dilated choroidal vessels and their congested circulation. Since “pachy-” means “thick” in greek, the thickness of subfoveal choroid was considered to be one of the hallmarks representing PSD. It is hypothesized that the enlarged vessels and their vascular hyperpermeability imply that abnormal choroidal circulation might cause subsequent RPE changes in PSD [17]. Warrow, et al. first reported nine cases in which pigment epitheliopathy was associated with thick choroid similar to CSC but they lack an appearance of subretinal fluid, thereby termed “Pachychoroid Pigment Epitheliopathy (PPE)” [18]. The idea of a new etiology pachychoroid has further driven a hypothesis that CNV beneath the RPE might be associated with thick choroid, which was termed “Pachychoroid Neovasculopathy (PNV)” [19]. It was previously known that long-standing CSC could be associated with Type 1 (sub-RPE) neovascularization [20]. Hence, it is speculated that chronic RPE changes and longstanding serous pigment epithelium detachment might induce neovascularization beneath the RPE. These observations have led to the concept that PSD involves PPE as well as the development of Type 1 Neovascularization (PNV), ultimately leading to PCV [21].

Previous studies in Asians described the number of eyes with large drusen but not medium drusen [13-16,24,25]. Recently, the prevalence of medium drusen has been reported to be 136 of 901 (15.1%) in a Japanese cohort (22). In our study, only one eye from 16 eyes with medium drusen developed nAMD (6.3%) while 11 of 50 (22.0%) with pigmentary abnormality presented nAMD within 5 years (Figure 1A). As expected, 20 of 74 (27.0%) eyes with large drusen >125 μm developed nAMD [23] (Figure 1B). Among 20 nAMD-developed cases from large drusen, the proportion of their first eyes’ AMD subtype was 14 typical AMD and 6 RAP, but no PCV. In contrast, about 11 cases that developed nAMD from pigmentary abnormality, in their first eye included 7 typical AMD as well as 4 PCV [23]. Taken together, only large drusen developed RAP and pigment abnormality may become PCV consistent with the previous report [16].

We also investigated the number of pachydrusen, a newly suggested type of drusen that differ from typical soft drusen on the macula [26]. Unlike typical soft drusen, pachydrusen have an irregular outer contour and show a scattered wide distribution throughout the posterior pole. Of note, pachydrusen are associated with thick choroid and often found especially in Asian eyes [26-28]. It is interesting whether this type of drusen can be associated with the progression of AMD or not. In our study, we found in total 106 eyes with pachydrusen in the fellow eye among 297 eyes. Among 106 eyes, we identified 46 eyes with pachydrusen that did not have any drusen >63 μm or pigmentary abnormality in the macular area [23] (Figure 1C). The mean subfoveal choroidal thickness of those 46 eyes was larger than those without pachydrusen in parallel with previous studies in Korea [24,25]. 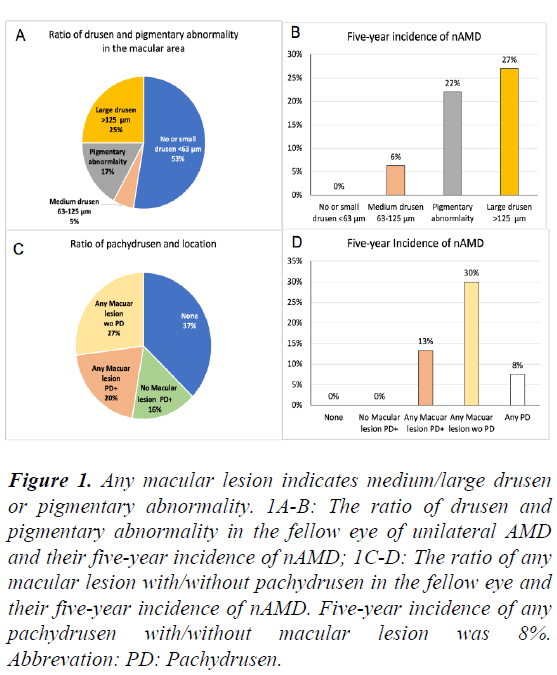 In conclusion, pigmentary abnormality, without drusen, may develop nAMD. Such a condition could be associated with pachychoroid pathology. There were limitations in studies in which only subfoveal choroidal thickness was used to determine the pachychoroid. Since choroidal thickness can be affected by age, axial length, etc., comprehensive analyses on the dilated vein structure “pachyvessels” and their vascular permeability will be required to further study the pathology underlying the exudative choroid and the RPE.