Does the duration of subcutaneous low-molecular-weight heparin injection impact in the occurrence, extent of bruising and on site pain?

For years, the common method for prevention of a Venous Thromboembolism, or treatment of a Deep Vein Thrombosis, has been unfractionated heparin [2]. Heparin does not dissolve a clot; it only facilitates the body’s own mechanism to dissolve the clot [3]. Heparin’s anticoagulant effect is achieved by combining with antithrombin III, which is already present in the body [3,4]. The result is a state of increased anticoagulation.

Subcutaneous injections often cause pain and bruising [5-7]. When nurses give injections as part of the medical care, it can cause patients to become apprehensive about receiving future subcutaneous medications, anxious about the nursing staff, or even noncompliant with medical care [5]. Noted that site-pain causes the patient physical and psychological discomfort and bruising limits possible sites for subsequent injections [5].

The safe and accurate administration of medication is one of the most important responsibilities of nurses [8,9]. Although subcutaneous heparin administration is a frequently performed nursing intervention, it often causes problems such as bruise, hematoma, induration and pain at the injection site [10]. Bruise occurs when a force causes blood vessels to blast. Blood leaks into areas under the skin resulting in pain, swelling, and skin discoloration. A bruise is an area of skin discoloration that is ≥ 2 mm2 [5,11]. Subcutaneous injection of LMWH in the abdominal area could reduce the incidence of side-effects at the injection site and reduce patient discomfort [12].

According to the study of Reva Balci Akpinara et al. [13], after 20 second duration while administration of enoxaparin left with fewer and smaller bruises as compare to 10 second duration. This study provides new information for nursing practice about bruising associated with subcutaneous heparin.

According to Harriet Chan et al. [5], the bruise incidence at the 10 seconds injection technique sites was approximately double that of the 20-seconds injection technique sites, clearly indicating that slow administration of subcutaneous heparin injections had lesser impact on bruising. According to the randomized controlled trial of 44 patients at Division of Perioperative Nursing, Department of Nursing, Faculty of Medicine Siriraj Hospital, Mahidol University, Bangkok, Thailand, a 30-seconds duration injection with a 10-seconds pause before needle withdrawal resulted in significantly fewer and smaller bruises [14].

In the literature, slow administration of subcutaneous heparin injection is recommended [15-17]. It is stated that when an injection is administered slowly, tissue damage can be reduced due to the reduction of giving strength of drug to the tissue [10,18,19].

According to the finding of the research study of Ayten Zaybak et al. [20], the use of a 20 seconds duration for administering heparin injections reduces the incidence or size of bruising. 20 seconds duration injection technique should be used for subcutaneous heparin injections in clinical practice. This study allocated patients from several specialties, where 50% of the patients were taken from the cardiology unit, 36% from the orthopedics unit and 14% from the neurology unit. The sample for the study consisted of 50 patients to whom subcutaneous heparin was administered All subjects were alert and conscious enough to answer questions. The percentage of bruising occurrence was 64% with the control injection technique and 42% with the experimental injection technique.

According to Harriet Chan et al. [5], subcutaneous heparin over a longer duration may reduce injection site-pain and bruising. A convenience sample of 34 subject receiving 5000 units of a subcutaneous Fragmin injection twice a day were recruited from a large teaching hospital. Subjects rated the level of perceived site-pain intensity during injection using the vertical Visual Analogue Scale. Injection-site bruising was measured at 48 and 60 hours after injection. Results indicated that 20-seconds injection duration resulted in significantly less intense site-pain during administering the injection and fewer and smaller bruises.

During the research and studies made over the years on about more than 500 patients, five RCTs were identified that evaluated the effect of subcutaneous heparin injection duration on pain intensity, bruise size and incidence. It was found that pain may be slightly reduced 48 hours after slow injection. Similarly, there may be a reduction in bruise size and incidence after slow injection compared to fast injection, 48 and 60 hours post injection [23, 24].

Considering the investigative findings within the limitations, the following conclusions can be drawn. The 20-seconds duration injection significantly reduces site-pain during injection and results in fewer and smaller bruises. This technique, therefore, is worth considering in developing nursing practice guidelines [5].

Purpose of the Study

The purpose of this study was to evaluate the duration of injecting heparin with a low molecular weight of 10 seconds compared to 20 seconds regarding the occurrence and level of bruise and pain due to this differences in time; in Research Hospital in Kingdom of Saudi Arabia. Several studies were conducted in the past on the same subject but for patients with different medical conditions (i.e. orthopedic patients and others) and not much of the studies have been done on cardiovascular patients. Moreover, none of those studies were done in Kingdom of Saudi Arabia.

Patients were selected if (a) they were at least 14 years old, conscious, oriented and alert, (b) were candidates for or had already underwent cardiovascular or vascular surgery, (c) were on bed rest, (d) were about to get subcutaneous Low Molecular Weight Heparin therapy, (e) provided permission to engage in the research.

Patients were ruled out if they (a) were pediatric patients less than 14 yrs old, (b) were pregnant, (c) had alter integrity of abdominal area, (d) had abnormal coagulation, hematological disease, liver disease and increased International Normalized Ratio, (e) were having other subcutaneous injections at the abdomen, (f) had low platelet count (< 140, 000 /mm3), (g) had dark skin colour.

b) Pandemic crises of COVID’19.

The exposure/intervention factor was the duration of the administration time of injection, 10 seconds versus 20 seconds. According to the evidence available, bruises usually peaks at 48 hours and starts disappearing within 72 hours of injection. Bruises were evaluated exactly 48 hours and 60 hours after injection; by an expert nurse with specific instructions and were blinded to the duration of injection. He/she evaluated the abdomen at the marked area 1 cm apart with nontoxic waterremovable coloured ink on both sides. 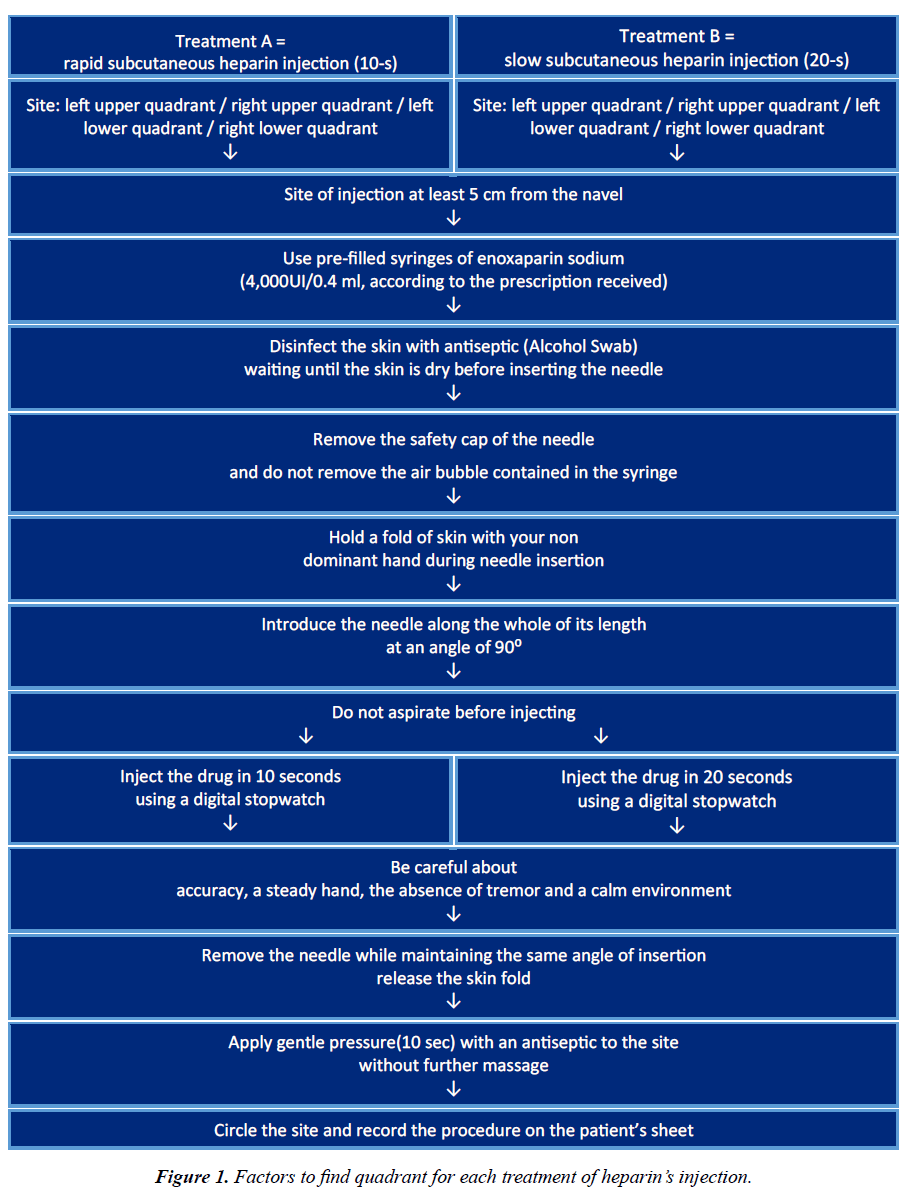 Figure 1: Factors to find quadrant for each treatment of heparin’s injection.

We performed study of 10 seconds and 20 seconds of subcutaneous heparin injection on the same patient. 194 subjects were studied in order to reject the null hypothesis; i.e., this relative risk equals 1 with probability (power) 0.8. The Type I error probability associated with this test of this null hypothesis is 0.05.

a) To measure the occurrence, extent of bruises after two different injection durations.

b) To measure the pain score at the site of injection with two different injection durations.

The location of each treatment was known only to the nurse who injected it. The location was written on paper, placed in an envelope and stored in a locked safe. Nurses who examined the bruises did not know which treatments were performed on either location. Data analysis was also performed blindly. An envelope containing this information was opened after the analysis was completed.

Independent Variables collected include age, gender; diagnosis and size of bruising in mm. Investigators were trained to perform the two types of injections. Surgery, past medical history, neurologic status, current medication and admission date were collected. Dependent Variables collected include site of injection, self-reported pain scores using the Adult Verbal Pain Scale at the time of injection and site measurement at 48 hours and 60 hours after administration for occurrence of bruising using the measure tape.

Remaining 37.02% (n=114) patients were excluded due to discontinuation of the medication or discharged before completion of the assessment within 48 and 60 hours.

Occurrence and Extend of Bruise

Contingency analyses of pain comparison were conducted while adjusting for age, gender, type of diagnosis/surgery, and past medical history. No differential relationships in pain score comparisons were noted across these adjusting variables.

a) This research was conducted according to the ethical principles contained in the Declaration of Helsinki, the ICH Harmonized Tripartite Good Clinical Practice Guidelines, the policies and guidelines of the RAC at King Faisal Specialist Hospital & Research Centre, Riyadh, KSA and Saudi Arabian law.

b) Each and every participant in this study gave their consent in a written statement.

c) Every subject in the research was assigned a unique identification number different from their Medical Record Number to ensure the anonymity of the patients during data analysis subsequent to its collection. The list of patients’ identification number with its respective Medical Record Number was kept under lock and key. A predefined form was used to collect data that indicated the patients’ serial number only. The database and all digital records relevant to this study were password protected and known to the investigators and research coordinator only.