Depression influence on memory and executive functions in patients with post-traumatic stress disorder, victims of the army conflict in Colombia.

Introduction: Post traumatic Stress Disorder (PTSD) is a neuropsychiatric pathology. It is characterized by the fact that the subject has been exposed to stressful situations which have caused them physical, emotional and mental instability in different aspects of their daily life. The subjects diagnosed with PTSD show a clinical picture of severe depression which is related to a deficit in their neurocognitive functioning, especifically in memory tasks (operative memory and inmediate verbal memory) and in executive functions (semantic verbal fluency, inhibition, planning and control of their immediate conduct). Objective: To indentify the influence of depression on memory and the executive functioning in patients with PTSD who are victims of the army conflict in Colombia. Methodology: Participants: 50 people diagnosed with PTDS, depression, and without dementia (35 men and 15 women) participated in this study. The individuals were enlisted from the unit of victims affiliated with the municipality of Palmira, Valle del Cauca, Colombia in a period of time from 2015 through 2017, and a control group of 50 healthy subjects with the objective to compare the results and be able to establish differences and intra-group robust results. Results: Individuals with PTSD show a higher depressive symptomatology than the ones in the control group. It was found that depression is related to the deficit in the immediate verbal memory, operative memory, and the executive functions in subjects with PTSD victims of the army conflict in Colombia.Conclusion: It is necessary to make plans for functional neurorehabilitation for individuals diagnosed
with PTSD in order to improve their quality of life and to slow down their clinical picture to a posttraumatic
dementia diagnose. The government needs to create mental health policies designed to
counteract this neuropsychiatric pathology ;our main goal ,and the neurocognitive functioning,
neurobehavioral/emotional, individual, and family neurorehabilitation of people with PTSD victims of
the army conflict in Colombia, thus preventing clinical pictures of post-traumatic alexithymia.

Post traumatic stress disorder (PTSD) is a neuropsychiatric pathology which is characterized by the subject´s exposition to stressful situations which have caused physical, emotional, and mental instability in many daily aspects of their lives [1-4]. PTSD is clinically correlated with the anxiety disorder according to the DSM IV [5] y DSM V [6], it can show tachycardia, thorax constriction, perspiration, nightmares, insomnia and episodes of intrusive memories concerning to the trauma that the subjects have experienced [7,8].

Neuroconductual alterations as depression in the PTSD are characterized by feelings of disability, weeping, inability to experience pleasure, and bad mood which prevents the subjects from doing their daily life activities [9,10].

Depression as a neurophychiatric pathology has an effect on quality of life deterioration (QOL) and on the neurocognitive functioning of people with this pathology. The data obtained by different [11-15] researches have found that depressive symptomatology affects the storage, consolidation and evocation of information, specifically on the inmediate verbal memory and in every aspect of it, likewise; it was found that depression is related to executive deficits [16-18], associated to the subcortical and the prefrontal cortex, frontal interactions, preventing the patients from regulating their decission making in different contexts, data which is also related to a clinical profile of severe cortical subcortical atrophy [19-21].

Damage has been found on the dorsolateral cortex, superior orbitofrontal gyrus, entorhinal cortex and hippocampal dentate gyrus, it prevents the patients with PTSD from correctly processing the enviromental stimulii which are present in their inmediate context, it is clinically correlated with post traumatic alexithymia [22,23].

At the end of the article a treatment suggestion on functional neurorehabilitation is presented in order to improve the QOL in people diagnosed with PTSD.

Identify the influence of depression on memory, and executive functions, in patients with PTSD victims in the Colombia army conflict.

50 people diagnosed with PTSD, with depression, and with no dementia (35 men and 15 women) participated in this study. The subjects were recruited at the unit of victims assigned to the mayor´s office of Palmira-Valle del Cauca in Colombia, during a period of time from 2015-2017, and in a controlled group of 50 healthy individuals in order to compare the results, and be able to establish robust data (Table 1).

Table 1. Sociodemographic characteristics of the sample.

To be admitted in the study, the subjects must fulfill the following requirements of inclusion:

• To be diagnosed with PTSD by a specialist doctor in Neurology or/and with a Ph. D in Clinical Neuropsychology.

• Do not suffer from dementia:

• Obtain a score equal or higher to 135 on the Dementia Rating Scale.

• Do not show more than ten years of evolution of the disease.

• Do not show a record of neurological, neuropsychological nor psychopathological alterations clinically demonstrable.

• Do not show a medical profile with a record in alcohol or toxic substances.

• Subjects must not have been subjected to any type of functional neuronal surgery or any treatment for neurophychiatric diseases.

Subjects in the control group had to fulfill the same requirements as the experimental one, apart from the one which states that they did not have to be diagnosed with PTSD.

For depressive symptomatology, the Geriatic Depression Rating Scale by Yesavage [24] and Beck´s depression inventory (BDI) [25], were used. To evaluate the memory and the executive functions of the Dementia Rating Scale (DRS) [26], Frontal Assessment Battery. (FAB) [27], Memory item of the MMSE [28] and task of operative memory and immediate verbal memory were used.

Table 2 shows the results of the statistical test used. In both tests (BDI and Yesavage) the patients with PTSD show a superior average rating scale to the one obtained by control group.

In both instruments the patients with PTSD show a very high average in comparison to the one of the control group.

Table 3 shows the summary of the results of the T-student about the variables that were used to evaluate memory in different sections, followed by the results of the U of Mann- Whitney results. Highly meaningful differences with p<.001 were found in each one of the memory components and minor value of the average in the subjects with PTSD compared to the control group.

The Table 4 shows the values evaluated in each one of the domains of the executive functions. Minor average values were found in the subjects with PTSD compared to the control Group subjects. Difference have been highly meaningful with p< 0.001 in each one of the sections.

Correlations between subjects with TEPD

Table 5 shows some tendency to a negative, or inverse correlation, in the coefficients of Pearson and Spearman between the overall rating obtained on the BDI scale, and the rating obtained on the DRS (p= .036). Nevertheless, it does not reach a significative statiscal grade (p<.005) when distortive elements such as schooling, and age situation which is similar in each one of the memory components, where positive statistical differences, that show the existence of any type of inverse correlation, were found.

Table 6 shows the results on the scale of Yesavage with each one of the domains, or evaluated memory sections in subjects with PTSD. Likewise, in relation to the BDI, a tendency to show negative or inverse associations were found, especially in the immediate verbal memory (.034). In the partial coefficient, and eliminating the distortive elements of schooling and age, this statistical significance disappears (p>.05). Statistics that show inverse Co-relation between depression (Yesavage) and memory.

Table 7 shows the results of the corelations between the BID (depression) and the executive functions.

A tendency to show negative or inverse corelations was found, but especifically in the overall punctuation of the FAB(p<.05) with a semantic verbal fluency (p<.01 en Pearson y p<.05 en Spearman), also with the task chance (p<.05) and the verbal action fluency. Subsequently, when the variable statistic controls which modulate the effect, such as age and schooling was done, many significative statistical differences with p<0.5 corelations of BDI with semantic verbal fluency (r=-.293; p=. 022) and verbal action fluentcy (r=-.265; p=.033) were found.

Table 8 shows the results of Yesavage test with each one of the domains of the executive functions. Only inverse correlations were found on the overall rating scale of the FAB (p<.05), semantic verbal fluentcy (p<.01), task change (p<.05) and fluentcy of verbal action (p<.05), meaningful statistical difference in the alternate verbal fluency section was found, but this time, only in the Spearman´s coeffient (p<.05).

The data obtained in this research shows that the subjects with PTSD present more depressive symptomatology than the ones in the control group.

The presence of depressive symptomatology in patients with PTSD is corelated in negative or inverse manner with the executive functioning (verbal fluency and task change), and in memory tasks, specifically in immediate verbal memory tasks.

Depression as a frequent neuroconductual alteration in PTSD affects the detriment of brain structures such as the frontalsubcortical circuits, prefrontal cortex, dorsolateral cortex, and the superior orbitofrontal gyrus; brain structures which co-related to planification, organization, decission making, and the immediate conduct control (executive functions) (Figure 1). 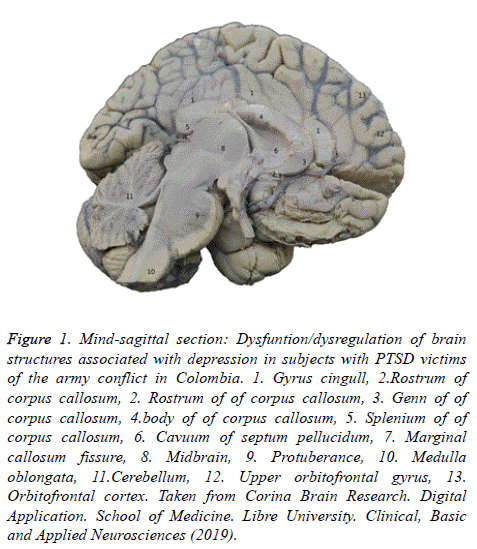 Likewise, the depressive symptomatology includes the inability of the subjects to evoke and process information, finding disfunction in the cell wall of the hippocampus, the amygdala nuclei, the tail of caudate nucleus, and the temporal projections of the temporal lobe (Figure 2). 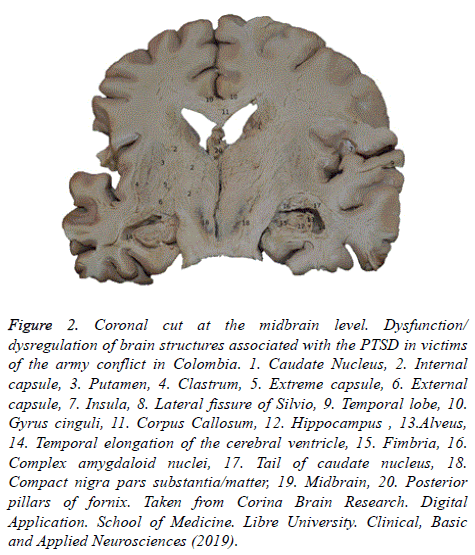 The depressive symptomatology of the subjects with PTSD is related to the dopamine deficit located in the compact nigra pars substance of the midbrain, thus it is necessary to establish functional neurorehabilitation plans in order to improve the QOL of these people, and to slow down the post traumatic dementia clinical picture.

During the last year, Colombia has highly advanced in different fields, nevertheless, there is a lot yet to know and search for in order to have the ability to intervene in vulnerable populations as the army conflict victims. Unfortunately, the Country is being ruled by ministers who don´t have the ability to empathize with other people because of ignorance. In the midst of this, new mental health policies, which are empty and far distant from the social reality, are being created.

We need mental Health policies that strive to improve PTSD patient´s quality of life and not just a stastistical datum which is only shown on paper and in hands of people who do not know the consequences of the social phenomena, therefore we propose the following:

• Doctors must be trained and qualified to diagnose people with PTDS, because most of the diagnosis are confused with dissociatives alterations of personality or with a generalized anxiety clinical picture.

• Victims of the army conflict in Colombia require an evaluation process, diagnosis, and permanent treatement. The purpose of this is to identify neurobehavioral and neurocognitive alterations in early stages so we can slow down the possible clinical pictures of Postraumatic dementia.

• The subjects with PTDS must be individualized so that we can allow the cases to be the only ones for the Medical professional (psychiatry or neurologist), and their treatment according to the type of trauma suffered by the patient.

• Subjects with PTDS need the support of resilient communities. This is going to enable them to find a personal meaning to life and deal with other people´s reality from different assertive coping strategies in their immediate context.

• It is the duty of the state to create mental health policies, specially inclusive ones, and not social inclusion processes which can be confusing or overlapped with process of social integration.

• Urgent attention patients with PTSD is an important matter for a competent health care professional, but it is more relevant for society in general, since we have the responsibility of preventing the postraumatic alexithymia.

“ I wake up three or four times in the night, and I feel how the bomb explosions, the shouts of the people thunder in my mind, but above all of this, I listen to my children´s shouts for help”