Aim: Dengue is a multi-organ disease so ophthalmic examination for all patients will be included in management protocol.

Setting and design: This was a cross-sectional study, conducted at public hospital in Dhaka, Bangladesh from 1st August 2019 to 29 September 2019. (60 days) and total population was 4030.

Statistical analysis used: Though it was a cross-sectional study so frequency was shown in bar-chart and histogram and incidence were measured in percentage

Conclusion: Conclusion: There is a general proverb “Treat the man not the diseases,” many systemic diseases has got ocular effect and now-a-days the uncommon disease is becoming common and epidemic due to climate change. Dengue is such a disease which involves ocular tissue from mild to severe form so knowledge of ocular involvement of Dengue is mandatory for an ophthalmologist.

Among the ophthalmologist as well as the internist has shallow knowledge about ocular involvement of Dengue and text book has not written elaborately about it so our medical personnel have lack of knowledge about it. But last few years Dengue is increasing dramatically mainly 2019 Dengue has become epidemic in Bangladesh. And we the ophthalmologist is getting referred patient every day from different public hospital and also private clinic with some newer manifestation which we didn’t come across previously.

The incidence of dengue has increased 30-fold over the past 50 years. Climate change is one of the important factors for current scenario [1]. At present, approximately 40% of the world’s population is at risk for dengue [2]. Dengue is not an uncommon name to the mass population but at last century it was not known to educated people as well as preclinical medical student but last 20 years the scenario has changed. It increased dramatically within the last 20 years, becoming one of the worst mosquito-borne human pathogens. In addition to climate, there are many factors which are contributing spread of Dengue, among them growing incidence of developing urbanization, tourism, and trade [3]. But the lacking of infrastructure is a big concern [4]. According to the report of Global Climate Risk Index 2017 Bangladesh was judged to be the sixth hardest hit by climate calamities of 180 nations during the period 1996-2015. They also told, global mean temperature will rises 3.7°C above preindustrial levels by 2100 [5].

Dengue is transmitted by female Aedes mosquito, usually the Aedes aegypti mosquito though humans are not capable of transmitting the disease and are not contagious [6,7]. The global incidence of dengue has grown dramatically in recent decades. Dengue is found in tropical and sub-tropical climates worldwide, mostly in urban and semi-urban areas [8]. Dengue is widespread throughout the tropics, with local variations in risk influenced by rainfall, temperature and unplanned rapid urbanization [9].

Severe dengue was first recognized in the 1950 ’ s during dengue epidemics in the Philippines and Thailand. Today, severe dengue affects most Asian and Latin American countries and has become a leading cause of hospitalization and death among children and adults in these regions.

In a current study globally by World Health Organization estimates that there are 390 million are infected per year [10]. This year that is 2019, Dengue is in alarming situation. According to Health Bulletin of CDC, DGHS, Bangladesh Global and regional update of Dengue from 01 January 2019 is as follows:

Bangladesh has a tropical monsoon climate characterised by heavy seasonal rainfall, high temperatures [14]. In the rainy season is particularly between July and September, is typically associated with cases of dengue fever [15]. Dengue is transmitted to humans through the bites of infected female mosquitoes, but humans are not capable of transmitting the disease and it is not a contagious so a dengue patient no need to quarantine. Sharing food, clothing, beds even sex is not restricted for him/her [16,17].

The characteristic symptoms of dengue are sudden-onset fever, headache (typically located behind the eyes), muscle and joint pains, and a rash. The alternative name for dengue, "breakbone fever" the presence of fever , rash , and headache (the "dengue triad") is characteristic of dengue fever [18-20].

Manifestations of dengue in the eye, though rare in the past, are now more recently noted to be common in some outbreaks [20] and dengue is emerging day by day, and few patients come with ocular complain mainly retro orbital pain so it is now an issue for ophthalmologist. Ocular involvement of Dengue is still confusing but most common finding in anterior segment is sub-conjunctival hemorrhage [8] and posterior segment finding is retinal hemorrhage [21].

It was a cross sectional study and study period conducted at a public hospital from 1st August 2019 to 30 September 2019, (60 days) and total population was 4030. Though Dengue is epidemic in this season, a special Dengue ward was open and most of the Dengue patient was admitted at that ward, in spite of that some patients were at the different ward in internal medicine.

The global incidence of dengue has grown dramatically increases in recent decades. About half of the world's population is now at risk. Dengue is found in tropical and subtropical climates worldwide, mostly in urban and semi-urban areas [6].

Dengue is a mosquito-borne viral disease is transmitted by female mosquitoes mainly of the species Aedes aegypti [8] and it has different characteristic than other, it born in fresh, stagnant water. This mosquito also transmits Chikungunya, yellow fever and Zika infection [26].

Manifestations of dengue in the eye, was rare in the past, but now more recently noted to be common in some outbreaks [27,28].

Dengue can have various manifestations in the eye, and more recently a newer terminology of “dengue eye disease” has emerged [29,30]. Among the symptoms retro-orbital pain the most common symptom and sub-conjunctival haemorrhage is the most common sign of Dengue [31].

The retro-orbital pain subsides as the disease cure and subconjunctival hemorrhage is self-limiting. There are some other complications which are vision-threatening but we are lucky enough that they are not as frequent as other two are.

The above report was prepared by Health Emergency Operation Centre and Control Room of Director General of Health Services, Bangladesh (HEOCC, DGHS, B,D). It shows the year-wise affected Dengue patient in the country (but up to 2018 Dengue was confined in Dhaka city) from 2000 to 2018 and highest affected was at last year that is 2018 and total patient was 10148. But this year from January 1 to Sept 22 there are 69348 already affected with Dengue. October is yet to go and it will exceed 100,000 (Figures 1-3). 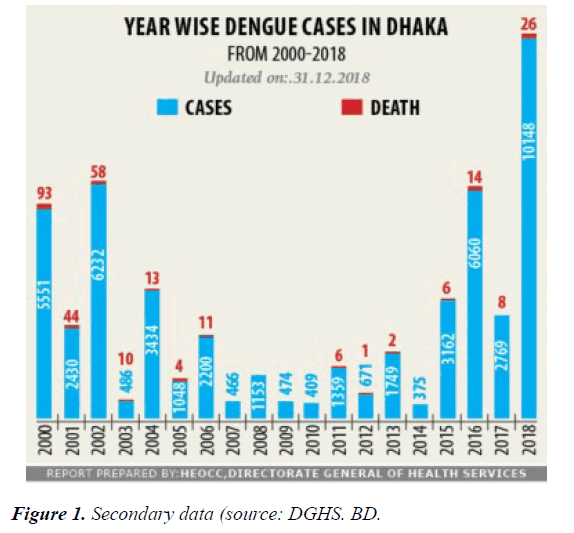 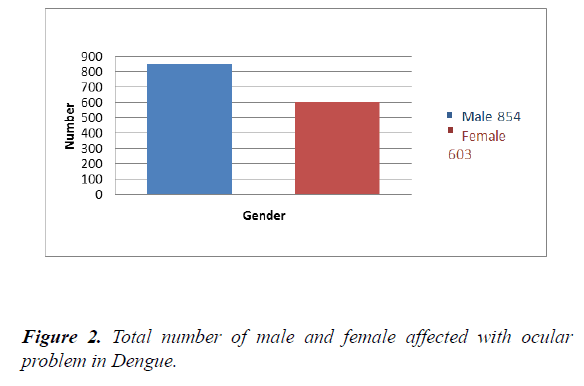 Figure 2: Total number of male and female affected with ocular problem in Dengue. 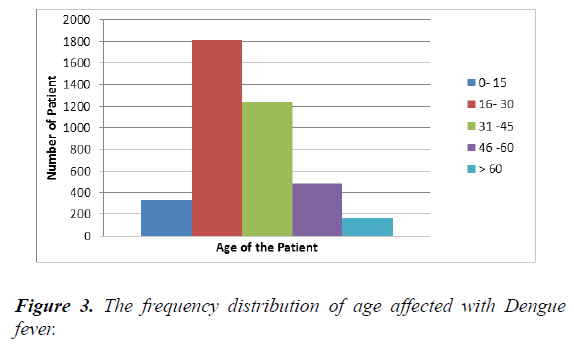 Figure 3: The frequency distribution of age affected with Dengue fever.

Another study from Islam et al. [33] 60% was male and 40% female. Male are more prone to develop Dengue fever it may be their habit of dress (they wear lungi but no shirt) Dengue is transmitted by the bite of the Aedes mosquito that typically attacks during day time. Its favorite spots are below the elbow and below the knee [34]. The dress habit of male in this subcontinent is bare body of upper half and for the lower half they wear lungi [35]. (The lungi is a type of sarong originating from the Indian subcontinent and a traditional garment worn around the waist).

In our study mean age was 31.6 year but according to Medscape Ophthalmology in Asia Dengue is common in children than adult, but in America it is equally distributed among all age groups which contradict with our study, it is due to our study was based on a single hospital and it is a multidisciplinary hospital but children usually admitted in pediatric hospital [36]. But current epidemiological trends have shown a gradual shift in the burden of dengue from the paediatric to the adult population. The incidence of dengue occurring in the elderly has been increasing consequently [37]. Our study is consistent with Sujatha et al. in their study mean age was 32 years (20 – 60 years) [38]. Our study also comparison with Yip et al. [21] the authors’ search yielded 29 articles. A total of 686 patients with a mean age of 33.4 years (range 14-73 years).

Among the total population 282 (6.10%) patients were suffering from conjunctival chemosis, which is similar with previous study of Dhar et al. [40] 2019 in their study it was 5.45% among the total patient. In our study we got 52 (1.29%) patients were suffering from anterior uveitis among the total 4030 patients, but previously it was not known to ophthalmologist and not a single case was reported before 1990 At present many studies show there is a positive correlation between Dengue and uveitis. Srinivasan R et al. from south India reported six uveitis cases in Dengue [41]. The cause of ocular complications from dengue fever is still not well understood. However, an immune-mediated cause has been suggested. “The release of cytokines with vasoactive and procoagulant properties in response to immunological activation might explain the occurrences of retinal vascular occlusion seen in patients with dengue infection,” King, et al. noted [39] “In addition, these inflammatory mediators cause capillary leakage and breakdown of the blood aqueous barrier, resulting in anterior uveitis.” In our study most of the patient with anterior uveitis was IgG positive so it means that the patient was previously exposed to Dengue virus of another serotype so current attack of uveitis was due to delayed hypersensitivity reaction. So, any patient came to us with uveitis we have to take the previous history of Dengue fever because during uveitis the patient may not have any dengue features.

The possible mechanism of corneal complication in our case is believed to be a result of complex immune-mediated process which might have caused autoantibody formation against corneal endothelial cells [42]. Among the total 4030 patient, 23 (0.57%) were involved with keratitis.

Among the posterior segment findings retinal hemorrhage 103 (2.56%), Vitreous hemorrhage 66 (1.64%) and macular edema 57 (1.41%) which is not consistent with many other studies. And our study shows lower prevalence of posterior segment findings than other. In Singapore studies among 13 patients with ocular findings in Dengue fever shows macular oedema, blot hemorrhage, cotton wool spots, retinal vasculitis, exudative retinal detachment and anterior uveitis [20].

Another study from Dr. BR Ambedkar Medical College and Hospital, Bengaluru, Karnataka, India. A total of 120 patients were diagnosed with dengue fever and posterior segment findings were present in 16 patients (13.3%); of which, 14 (87.5%) had retinal hemorrhages [38].

Their findings of posterior segment was higher with comparison to our study, it may be our data were collected by residents and trainee doctors and most of the patient was examined in their respective ward and due to scarcity of bed in ward many patients were in the floor and it is too tough to do ophthalmoscopy in this position. (This is the actual scenario of many public hospitals in Bangladesh, India, Nepal and Pakistan during an epidemic attack).

It was a single centered public hospital based study. In Bangladesh usually lower income group people come to this hospital so our study doesn ’ t reflect the whole community.

• Dengue is a newer disease in Bangladesh before 2000 our internist was not accustomed with the management of Dengue. In 2000 out of 5551 patient 93 was died (see above data HEOCC, DGHS, B,D) but the mortality rate is gradually decreasing due to expertise developed among the internist, also ocular involvement was unaware to the ophthalmologist still huge gap is there. In our study, we didn’t kept record of complete blood count (CBC) report but it is important to correlate platelet count and subconjunctival hemorrhage and retinal hemorrhage.

• The study was done by ophthalmologist and one junior internist but Dengue is a systemic disease so multidisciplinary (Internist, pathologist, hematologist) action have to include in the research group

• Multicenter study which will cover both public and private hospital in the country irrespective of district, because up to 2018 Dengue was confined in Dhaka only but this year 2019 most of the district affected by Dengue fever.

• It was a cross-sectional study, so single data was collected, but it needs follow-up so longitudinal study is the best option

The research group will be consisted not only with ophthalmologist but internist, hematologist have to be include.