The fall armyworm Spodoptera frugiperda, (Lepidoptera: Noctuidae) is a migratory pest of maize crop in African continent and United States. It is mostly feed on leaves at larval stage. When population becomes high then its feeds also on ears of maize plants. This pest can be controlled by various types of pesticides globally but now resistance has come in pest against insecticides. So we can also control this pest by other control strategies including physical, biological, mechan- -ical control instead of chemical control method. By this can save our ecosystem and nature from hazardous effects of chemicals.

The genus “Spodoptera” has 25 species but S. littura, S. muritia, S. exempta and S. frugiperda are economically significant species for agricultural crops. S. frugiperda (Fall Armyworm) is an invasive pest of many crops but most serious pest for maize. It is migratory lepidopteran insect pest with more than 100 plant species. It belongs to Family “Noctuidae” and Order “Lepidoptera”. It is occasional, polyphagous and quarantine pest for various countries. It is also known as economic pest of corn. It is widely distributed in tropical and subtropical regions of globe. It is nocturnal pest because it is active at night for feeding and mating purposes. Previous researches have been proved that it’s known as chief deflator globally [1].

There are two white spots present on forewings. Female lays eggs on stalks, underside the leaves and also upper side the leaves which are covered by layers of hairy scales. Its pupae are dark brown in color. New born larvae are green in color and become light tan to black. It has inverted “Y” symbol on head which differentiate it from other species. Adult moth lives up approximately 21 days and average 10 days. Female is larger than male in size and lays 1500 to 2000 eggs in her life span. Their life cycle complete in 21-40 days [2]. Cannibalistic behavior occurs in larval stages in which larger larvae feed on smaller in case of food shortage. There are 8 no. of generations per year. They are strong flier and migrate very vastly from one area to another. They mate through releasing sex pheromones and create confliction among males. They also feed on nectar of flowers at night.

Damage and its Symptoms

Neonate’s larvae feed on leaf gregariously and leaf becomes dry, then larvae move to other leaf for feeding. At mature stages they feed on leaves severely and only midrib and veins will be standing in the field without leaves. Previous researches have been proved that they are known as chief deflator [2]. In case of cotton, at flowering and boll formation stage they feed on internal contents. They make irregular holes on the leaves. Leaves of maize plant eaten and whorl may be a mass of holes, ragged edges and larval frass [3]. Young larvae dry up the leaf lamina. Severe feeding by larvae can kill growing points of crop plant. Larvae can also attack on cob (Figures 1-3). 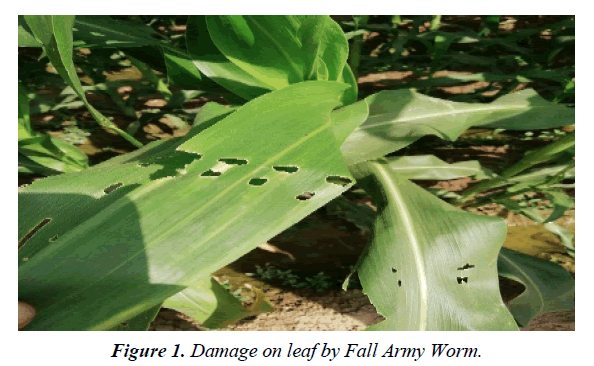 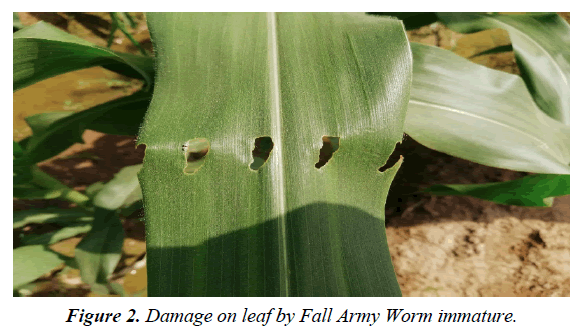 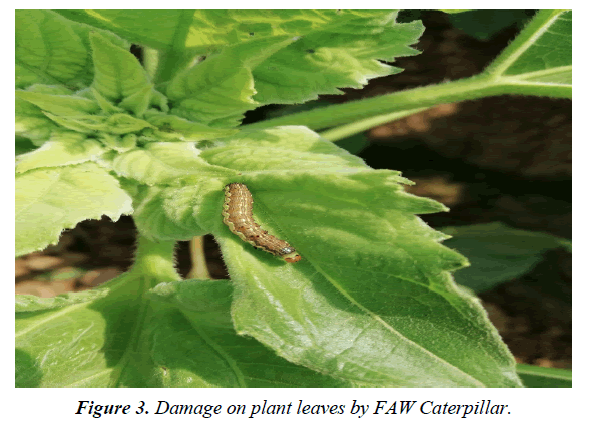 We should avoid planting in already infested areas. We should keep our field and surroundings weed free and clean to prevent insect pests and diseases. We should remove crop residue and alternate hosts of insects pests. We should not move infested maize plants from one field to another field because this activity cause infestation. We should adopt Intercropping with legumes, other roots, tuber crops and cucurbits etc. We should also adopt crop rotation to fight against insect pest of crop [3].

We should avoid late of off season planting to avoid population build up. We should remove crop residue and all alternate hosts. Plant should be at correct spacing and use of optimum fertilizers for crop. We should not move infested maize material from one field to another to prevent infestation. We should put a half handful of sand/ sawdust or soil in the attacked plants to kill the larvae. We should apply a pinch of 50 gm ground hot pepper + 2 kg ash into plant funnel at knee high. We should use various pheromone traps to predict and identify the risk areas (high, medium and low) [5].

There are various parasitoids that can be used to control this pest including; Trichogramma pretiosum, T. atopovirilia egg parasitoids (100000 per ha) and Telenomus remus (2500- 3000). Fly and wasp parasitoids target the fall armyworm including; Archytas marmoratus, Cotesia marginiventris and Chelonus texanus [6].

Caterpillars of fall armyworm are directly preyed on by many invertebrates and vertebrates like birds, rodents, beetles, earwigs, bugs, isodontia app and predatory wasp (Figures 4 and 5) [7]. 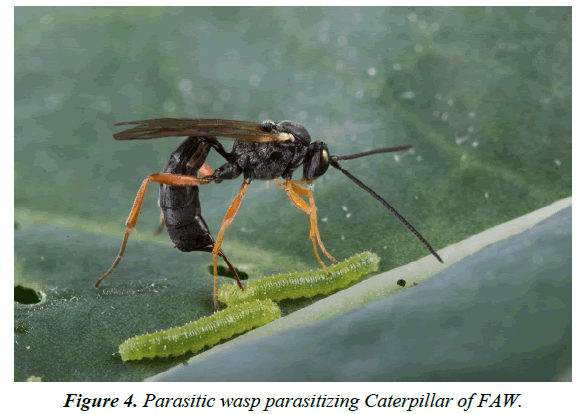 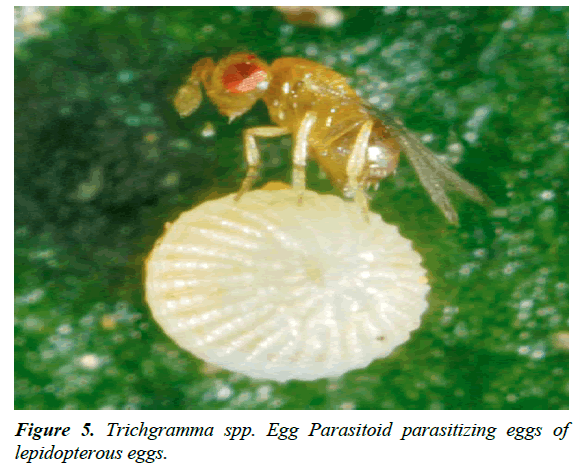 There are various chemicals which can be used to control fall armyworm. Chemicals including; Indoxacarb, Emamectin benzoate, Flubediamide, Lufenuron, Methomyl, Malathon and Chlorpyrifos [9].