Prostatic carcinoma is a common public health problem in aging people. Cyclin D1 proto-oncogene is an important regulator of G1 to S phase progression in many different cell types, It is believed to play an important role in both tumorigenesis and grading of many cancers including prostatic carcinoma; high levels of these proteins have been reported in certain human malignancies and have been implicated in aberrant cell division and dysregulated tumor growth. The aims of this study were to examine the immunohistochemical expression of Cyclin D1 in prostatic carcinoma and to demonstrate the association or relation between Cyclin D1 expressions and to determine the aggressiveness of the malignant tumors by Gleason Score. In this study 50 samples, 25 cases of prostatic cancer and 25 cases benign prostatic tissues were studied for Cyclin D1 expression using an immunohistochemical technique which was performed on routinely processed, formalin fixed and paraffin embedded tissues; then tissues were sectioned into thickness of (3 µm to 5 µm) with rotary microtome instrument and immunohistochemical expression of CyclinD 1 was evaluated in all cases. All of the primary human prostatic cancer samples revealed in different ranges of intensity from weak (+1), moderate (+2) to strongly positive nuclear staining (+3) for Cyclin D1. In this study we revealed no nuclear staining in the benign prostatic hyperplasia (PBH) disease (+0) in 21 cases (84%) and 4 cases (16%) were ranged in different color intensity; 3 (12%) were weak (1+) and 1 (4%) case was moderate (2+) while prostatic cancer cases were also evaluated in different colors; 13 cases (52%) were (+3), 7cases (28%) were (+2) and 3 cases were (12%) were (+1) and only two (8%) were negative. There was no significance correlation between Gleason's score and intensity of Cyclin D1 expression. Conclusively we can say that Cyclin D1 may be helpful in the differentiation between BPH and prostate cancer, the correlation between the intensity of Cyclin D1 expression and prostatic diseases was statistically highly significant (p value=0.00).We recommended to use Cyclin D1 as a biomarker to prostatic carcinoma.

Prostate cancer is currently the most common cause of cancer death in men. The exact cause of developing prostate cancer are not known though ageing, ethnicity and heredity are important factors involved in the initiation and development of this cancer. Ageing is considered the most prominent risk factor, with majority of cases being diagnosed in men between 60 and 70 years of age [1]. In Sudan prostate cancer is the most common cancer in Sudanese men. The first National Population-based Cancer Registry (NCR) was established in Sudan in 2009. During 2009–2010, 6771 new cancer cases were registered in Khartoum state. Of those, 3646 (53.8%) cases were in women and 3125 (46.2%) were in men. The most commonly diagnosed cancer among women was breast followed by leukaemia, cervix, and ovary, and among men it was prostate cancer followed by leukaemia, lymphoma, oral, colorectal and liver [2]. The development of Prostate Cancer (PC) occurs through the accumulation of genetic and epigenetic changes, leading to an inactivation of tumor suppressor genes and activation of oncogenes [3]. These alterations most likely take several decades and cancer development can be considered a continuous transformation from benign cells, cancer precursors and malignant cells [4]. Cyclin D1 proto-oncogene is an important regulator of G1 to S phase progression in many different cell types. It is believed to play an important role in both tumorigenesis and grading of many cancers including prostatic carcinoma; high levels of these proteins have been reported in certain human malignancies and have been implicated in aberrant cell division and dysregulated tumor growth [5].

Aim of the study

The immunohistochemical procedure was done as follows: one section (3 μm to 5μm) from formalin-fixed, paraffin-embedded tumors were cut and mounted onto adhesion microscope slides (super frosted slides pre-cleaned 1.1 mm thick 25.75 mm made in Chinacitotest Labware Manufacturing Co., Ltd. Wellkang). Following deparaffinization in xylene, slides were rehydrated through a graded series of alcohol and were placed in distilled water. Samples were steamed for antigen retrieval for Cyclin D1 using high pH (9) by water bath at 95°C for 30 min. After washing with PBS for 3 min Endogenous peroxides activity were blocked with 3% hydrogen peroxide and methanol for 10 min, and After washing with PBS for 3 min then slides were incubated with (20 μL) of Polyclonal antibody (anti- human Cyclin D1 PhosphoThr286 Immunotag), for 40 min at room temperature in a moisture chamber washed with PBS and secondary antibody was added and kept for 20 min. After washing with PBS for 3 min, binding of antibodies was detected, followed by adding 3, 3 di amino benzidine tetra hydrochloride (DAB) as a chromogen to produce the characteristic brown stain for the visualization of the antibody/ enzyme complex for up to 5 min. After washing with distilled water for 3 min slides were counterstained with haematoxylin (Mayer’s) for one min and then were washed in running tap water for several minutes 7-10 (bluing), then dehydrated, cleaned and mounted in DBX. Each slide was evaluated with investigator then the results were confirmed by consultant histopathologist.

The Gleason scoring of the studied prostatic carcinoma cases ranged between 2-10. The most prevalent score in the studied cases was Gleason score 4 (24%) as showed in (Table 2).

Cyclin D1 expression in 25 cases, in prostate adenocarcinoma and according to intensity of Cyclin D1 staining, Strong 3+, moderate 2+, weak1+ and negative 0, (Figure 1) and highest grade 3+ as showed in Table 5. 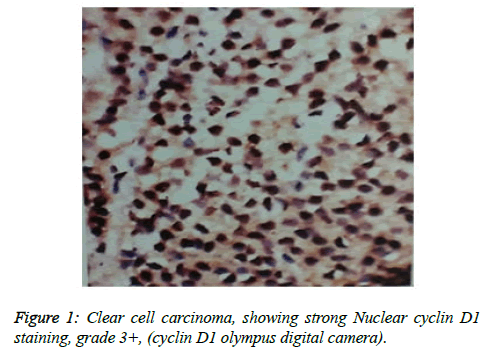 There was a negative significant correlation between Gleason Score and staining intensity for Cyclin D1 (-.135) and p.v no significant association (.519) (Table 6).

Table 6: Correlation between intensity of cyclinD1 expression and Gleason score. 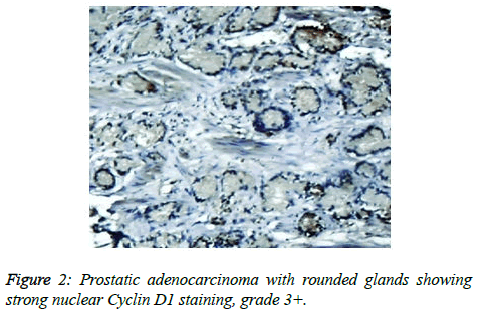 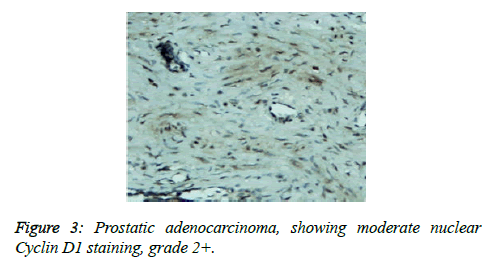 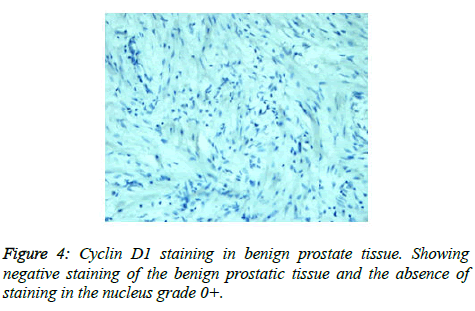 Conclusively we found most of Cyclin D1 expression in prostate carcinoma was 93% of cases while in benign prostatic hyperplasia was 16% and the correlation between Cyclin D1and Gleason score showed negative significance.

Conclusively we found most of Cyclin D1 expression in prostate carcinoma was 93% of cases while in benign prostatic hyperplasia was 16% and the correlation between Cyclin D1and Gleason score showed negative significance.