Methods: Retrospective chart review of 62 patients at a single academic eye center was performed. Patients who underwent pars plana vitrectomy and membrane peel for visually significant epiretinal membrane were included. Those with any confounding macular pathology were excluded.

Results: There was no statistically significant correlation between macular volume and baseline VA, post-operative VA, or visual gain. Patients with at least 2 lines of VA gain had a larger change in macular volume than patients with less than 2 lines gain (p=0.01).

Conclusion: In patients with ERM, macular volume may not be a reliable predictor of baseline or postoperative VA. However, our study suggests that a more favorable outcome of more than 2 lines of VA gained is associated with a higher reduction in macular volume after surgery.

Epiretinal Membrane (ERM) is a common macular disorder that can lead to blurring or distortion of central vision and has been increasingly characterized with the advent of Optical Coherence Tomography (OCT) imaging [1]. Contracture of ERM causes retinal thickening, distortion of the inner retinal layers, and cystic edema.

This condition affects up to 20% of patients older than 75 years of age [2]. The treatment for visually significant ERM is pars plana vitrectomy and membrane peeling with or without internal limiting membrane peeling.

The goals of surgical intervention are to improve visual acuity (VA) and/or to reduce metamorphopsia [3,4]. However, clinical outcomes vary, and there is currently no model that is predictive of post-operative visual acuity gain based on preoperative clinical characteristics or OCT findings. Many studies have been conducted to examine the relationships between post-operative VA and baseline variables including severity of metamorphopsia, pre-operative VA and various OCT characteristics [4].

Most clinical variables and OCT parameter investigations have yielded mixed results or require larger studies to confirm findings, with only a few notable exceptions. Preoperative VA has consistently been shown to correlate with postoperative VA [7].

Additionally, disruption of the ellipsoid zone on pre-operative OCT has been correlated with a poorer visual outcome following surgery [8,9]. More recently, Zeyer et al. reported that a dome-shaped macular contour was correlated with increased visual acuity gain following ERM surgery when compared to a flat or depressed contour [10].

The purpose of our study is to evaluate the correlation between pre and post-operative macular volume with baseline VA and final post-operative visual outcomes in patients undergoing surgical removal of ERM.

This study was approved by the Institutional Review Board (IRB) of Northwestern University.

A retrospective chart review was performed of patients who underwent pars plana vitrectomy and membrane peeling for epiretinal membrane during the calendar years 2015 through 2019 in the Department of Ophthalmology at Northwestern University. Other inclusion criteria include availability of preoperative and post-operative macular OCT imaging, visual acuity data, and post-operative follow-up exam at least 3 months following surgery.

Patients were excluded from the study if they had any confounding macular pathology, including but not limited to advanced age-related macular degeneration, proliferative diabetic retinopathy, diabetic macular edema, retinal vein occlusion, or myopic degeneration. 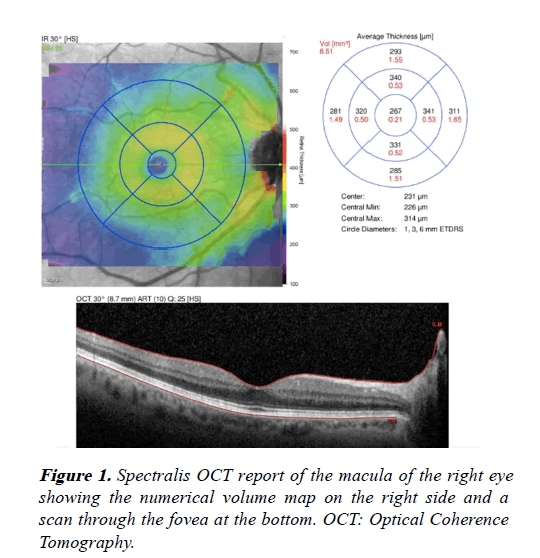 Figure 1:Spectralis OCT report of the macula of the right eye showing the numerical volume map on the right side and a scan through the fovea at the bottom. OCT: Optical Coherence Tomography. 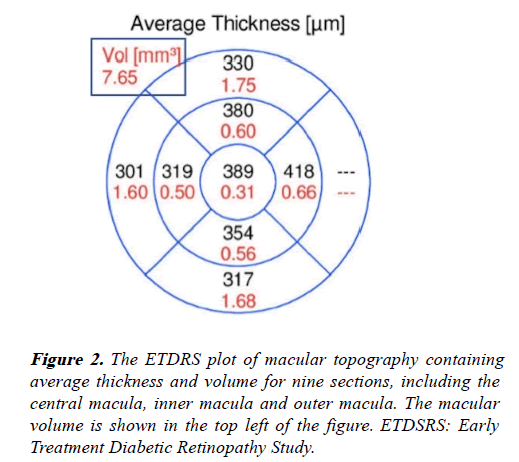 Figure 2:The ETDRS plot of macular topography containing average thickness and volume for nine sections, including the central macula, inner macula and outer macula. The macular volume is shown in the top left of the figure. ETDSRS: Early Treatment Diabetic Retinopathy Study.

Fellow unaffected eyes were used as controls for macular volume. Pre-operative visual acuity was defined as each patient’s Best Corrected Visual Acuity (BCVA) during the clinic visit prior to surgery.

A total of 62 eyes of 62 patients met criteria and were included in the final analysis (Table 1).

Correlation analysis using Pearson correlation test did not reveal a statistically significant correlation between macular volume and visual acuity either at baseline or post-operatively.

Optical coherence tomography provides valuable information regarding the architecture of the retina and aids in the diagnosis of many macular diseases including ERM. Understanding the relationship between anatomic parameters and visual function are becoming increasingly important as OCT plays a critical role in the pre-operative evaluation for patients undergoing pars plana vitrectomy for visually significant ERM. Many OCT parameters have already been investigated, but those that have demonstrated association with post-operative outcomes are primarily qualitative. Specifically, ellipsoid zone disruption has been associated with worse visual outcomes while a domeshaped macular contour has been correlated with better visual outcomes [8-10]. Evidence for a reliable quantitative predictive metric would greatly contribute to the evaluation and counseling for patients with ERM.

Our study has several other limitations including its retrospective nature and small sample size. Given the retrospective design, several variables could not be controlled including duration of the ERM and lens status. The slow and progressive nature of the condition and subjective reporting of visual decline renders difficulty in identifying the exact onset and duration of the ERM. In this cohort, 34/62 eyes (55%) were phakic at baseline; 21 subsequently underwent cataract surgery, 7 were documented to have progression of cataract, and 6 remained stable with respect to lens grading. Postoperatively, the majority of eyes were pseudophakic (79%) at the end of the follow-up period. Although progression of cataract in 7/62 eyes may confound the post-operative visual acuity, we speculate that the correlation between macular volume and VA or post-operative VA gain is unlikely to be affected because when analyzed separately both the phakic and pseudophakic groups have similar macular volume at baseline (p-value=0.8) and post-operatively (p-value=0.9). The surgical technique also varied among the four surgeons, such as the decision to perform internal limiting membrane and the use of intravitreal triamcinolone. In addition, other OCT characteristics such as the presence of cystic edema, lamellar hole, or ellipsoid zone integrity may confound our results.

The findings of our study offer insights that are useful in the surgical evaluation of ERM. The impact of ERM on visual acuity and metamorphopsia is multi-factorial and more complex than what the anatomic appearance or magnitude of macular volume on OCT suggest. It appears that in patients with ERM, macular volume may not be a reliable predictor of baseline visual function or final visual outcomes following epiretinal membrane surgery. Although not predictive of final visual acuity, a more favorable outcome of more than two lines of visual acuity gained is associated with a higher reduction in macular volume after surgery. Future investigation is warranted to further study this and other OCT parameters that may reliably predict final vision outcomes and aid in the preoperative counselling of patients with ERM.