Objective: To study the correlation between genetic polymorphisms of O6-Methylguanine-DNAMethyltransferase (MGMT) and temozolomide resistance in malignant brain gliomas.

Methods: 35 patients with gliomas (WHO grades III and IV) visited Neurosurgery Department in our hospital from 2007 to 2012. They were confirmed by pathology after the surgery without the acceptance of chemotherapy and with complete follow-up data were collected in our study. MGMT protein expression in the tumor tissues was detected with the method of immunohistochemistry staining. DNA sequence of MGMT gene exon was measured and patient's overall survival was tracked after the chemotherapy with temozolomide.

Results: After the chemotherapy with temozolomide, there was no statistical significance between the MGMT mutation in exon and MGMT positive expression without polymorphism (P>0.05).

Conclusion: There are three sites with polymorphism confirmed by previous studies in exons 3-5 of MGMT gene. But the correlation between these three sites mutation in MGMT gene was followed up in this study and temozolomide resistance became weak.

Glioma, developing from spongiocyte induced by neural ectoblastic, accounts for 35.2%-61.0% of primary intracranial tumors in human [1]. Malignant glioma (WHO grades III and IV), with the feature of extensive intracranial infiltrates and metastasis, is easy to relapse after surgery. Routine postoperative adjuvant therapy is required to improve the prognosis of patients with malignant glioma. Because the blood brain barrier, chemotherapy regimen would be frequently adopted based on alkylating agent to treat malignant glioma sufferers. Temozolomide (TMZ), as a second generation alkylating agent (imidazole four oxazine derivatives), has advantages of absorbing quickly, spreading around the body rapidly, freeing from the liver metabolism, and entering the cerebrospinal fluid through the blood brain barrier [2-7]. Cytotoxicity of TMZ forms mainly through the alkylation of guanine oxygen-6 of DNA in tumor cells, resulting in the damage of tumor cells. Repair guanine to eliminate the DNA alkylation damage in tumor cells caused by alkylating agent. Mechanism of malignant gliomas’ drug resistance is that MGMT acts on the alkylation groups within the tumor cells and further repairs guanine to block the DNA alkylating damage in tumor cells [8-11], leading to an unsatisfactory curative effect with significant efficacy differences. Therefore, MGMT activity has an important influence in alkylating agent chemotherapy of malignant glioma. Moreover, other studies also show that multiple exons of MGMT gene composed of five exons, experience polymorphism [12-15]. The transcriptional starting site is in exon 1; Coding regions are from exons 2-5; Cysteine (Cys-145) is the active site of exon 5 [16]. Thus, the discussion of MGMT gene exon polymorphisms of malignant glioma cells are important to further clarify the correlation between genetic polymorphisms of MGMT and temozolomide resistance in malignant brain gliomas patients and prognosis of malignant brain gliomas and provides a clue for further treatment.

35 patients with gliomas (WHO grades III and IV) registered in neurosurgery of our hospital from the year of 2007 to 2012 and confirmed by pathology after the surgery without the acceptance of chemotherapy and with complete follow-up data were collected in our study. Among all these patients there are 22 males and 13 females aged from 12 to 61 with an average age of 36 and 21 cases graded WHO III and 14 graded WHO IV; patients participate in the group voluntarily and promise the cooperation with follow-up and informed consent in this experiment. Karnofsky grade of the participants should be beyond 60 and blood routine examination tells the White Blood Cell (WBC) ≥ 4.0 × 109/L, Platelets (PLT) ≥ 100 × 109/L, HB ≥ 100 g/L; no serious liver and kidney function damages are involved; women of pregnancy and lactation are excluded. All patients are treated with radiotherapy and (TMZ) chemotherapy after tumor resection.

Extract genomic DNA of paraffin specimens with glioma tissue with paraffin specimens’ DNA extraction kit and take the specific operation according to TIANamp Genomic DNA kit instructions. Reserve it at the temperature of -20°C after its being identified to be qualified.

Design the primers of 1~5 exons through the gene primer design software of Primer5.0 MGMT according to the established human MGMT gene cDNA sequence [16,17]. Primers are synthesized by Shenzhen Genomics Institute (the primer sequence is shown in the Figure 1). Refer to the DNA polymerase TaKaRa Taq instructions to understand specific reaction system of PCR. Reaction products are purified through agarose gel electrophoresis and determine the DNA sequencing of MGMT gene exon PCR products with ABI377 automatic gene analyser. 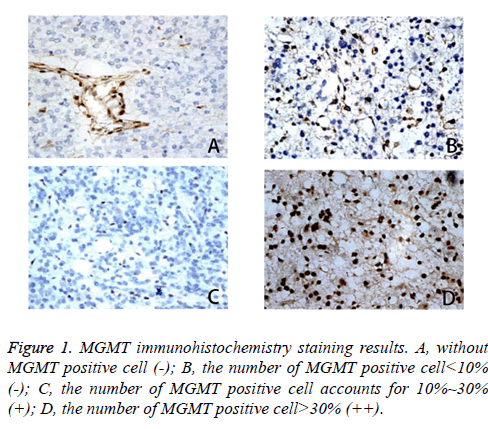 After surgery, the treatment of patients is based on the (TMZ) chemotherapy, tracking the patients’ total survival time: the time of beginning to accept chemotherapy to death or the time of the last follow up. Calculate the survival rate within 3 y with Kaplan-Meier method and draw the survival curves with the record of data.

Analyze the relationship between MGMT gene polymorphisms and the 3 y survival rate of patients in the treatment of TMZ through SPSS13.0 statistical software and Fisher's exact probability method. The result of P<0.05 presents the difference is statistically significant. 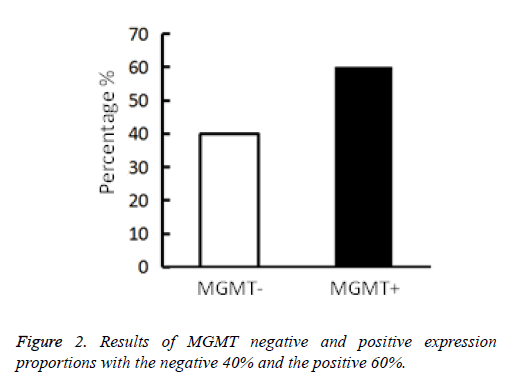 Figure 2: Results of MGMT negative and positive expression proportions with the negative 40% and the positive 60%.

Conduct MGMT gene polymorphism analysis on 21 malignant glioma specimens with MGMT positive and strong positive expression and it turns out MGMT gene polymorphism exists in 12 cases (Table 2). According to the automatic DNA sequencer’s analysis on 5 exons of MGMT gene of samples and the comparison with the known MGMT gene polymorphism reported in literatures [17], there is no signal of polymorphism in exon1 and exon2. But exons 3-5 are detected with polymorphism, marked with “c”. The DNA sequence of exon3 of the five samples is consistent with the polymorphism reported in literatures, the first base of codon84 turns C to T, making TTT take place of CTT and thus changing leucine into phenylalanine in terms of amino acid exchange. In 3 cases, the third base of codon94 of exons 4 changes from C to T, the codon from TTC to TTT, but the amino acid sequence experiences no difference, all being phenylalanine consistent with the mutations in previous reports [18,19]. In 4 cases, the codon160 of exons 5 turns from GGA to AGA, replacing glycine with arginine. This mutation case was reported by Imai [14].

Table 3. Survival time of each group. 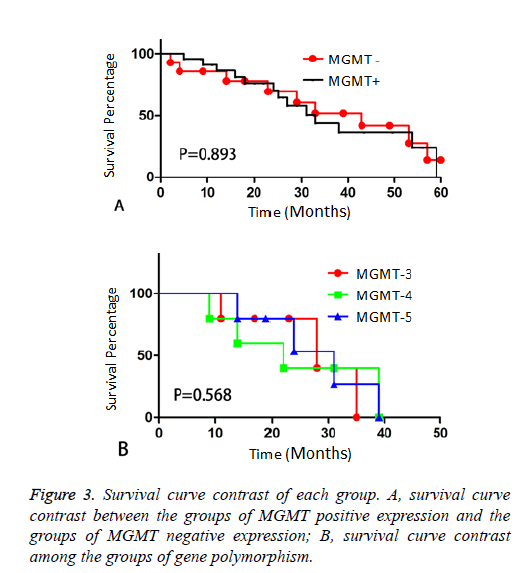 The results suggest that only 12 in 35 malignant glioma cases are found MGMT gene polymorphism, which is respectively demonstrated by the fact that the first base of codon84 turns C to T, making TTT take place of CTT and thus changing leucine into phenylalanine in terms of amino acid exchange, that the third base of codon94 of exon4 changes from C to T, the codon from TTC to TTT without the change of amino acid sequence, generally believed no pathological significance and that the codon160 of exon5 turns from GGA to AGA, replacing glycine with arginine. All these mutations are consistent with the recent literature reports [14,19].