Comparison of TNF-α promoter region with TNF receptor 1 and 2 (TNFR1 and TNFR2) in susceptibility to pulmonary tuberculosis; by PCR-RFLP

Pulmonary tuberculosis, is a granulomatous disease of the lungs that caused by Mycobaterium tuberculosis. A number of genes have been identified in studies of diverse origins to be important in tuberculosis. Out of which the tumor necrosis factor α (TNF-α) gene has been identified to plays a major role in the initial and long-term control of tuberculosis. In this study, the TNF-α gene at -238, -308, -857 and -863 position and tumor necrosis factors receptors one and two (TNFR1, TNFR2) at A36G and T587G position were analyzed and compared, respectively. The genotypes was studied in confirmed TB patients (n=151) and control group (n=83) using PCR-RFLP. The results showed a strong correlation between two polymorphisms in different loci of TNF-α gene including TNF-α T-857 C and A238G. Although no association were found in TNF receptors and susceptibility to TB. Additionally, no correlation between TNF receptors and gene polymorphisms were found. In conclusions, among studied cases only single nucleotide polymorphisms (SNPs) at TNF-857 and TNF-238 regions were associated with susceptibility to tuberculosis.

The World Health Organization (WHO) has estimated that more than 1.7 billion people are infected with Mycobacterium tuberculosis (MTB), the causative agent of tuberculosis (TB) [1]. Of these infected individual, 9.6 million people were fallen ill (1.1 million HIV-negative and 0.4 million HIV-positive) and 1.5 million expired due to TB related diseases (the death toll compromised 890,000 men, 480,000 women and 140,000 children) [1-3]. Despite several attempts to control the disease, TB is too hard to control mainly due to chronic character, long term treatment and difficult vaccine preparation as well as more coincidence with HIV infection [4-8]. More than 90% of TB-related death occurs in developing countries where 75% of TB patients are among their most economically beneficent age range (15-54 y) [5-8]. The susceptibility to TB depends upon different factors and the risk of developing diseases after infection with M tuberculosis ranges from 5% to 10% [1,9]. This suggests that besides the mycobacterial itself, the host genetic factors may determine the differences in host susceptibility to TB [10-14]. Among the important risk factor, cytokines and specially tumor necrosis factor alpha (TNF-α) genes, are thought to be responsible in regulating the protective immune responses [9,14]. Tumor necrosis factor alpha (TNF-α), gene that encodes the cytokines TNF-α is located within the class III region of the MHC [14,5]. TNF-α works often through related gene transcription in terms of inflammation, cell division, cell differentiation and apoptosis using two types of receptors, TNFR1 and TNFR2 [15,16]. The former exists in almost all cells while the latter sounds more specific and more effective in cell survival. TNFR2 is one of the main receptors on CD4+ and CD8+ lymphocytes. Cranial Neural Crest cells (CNCs) and endothelial cells. CD4+ and CD8+ seem to be important in immune cell replication and differentiation to prevent the growth of intracellular microorganisms like M tuberculosis [17,18]. TNF-α gene and its receptors have significant suppressive effects on bacterial growth into macrophages. TNFR1 is more responsible when apoptosis is needed but TNFR2 is involved in cell survival and TNF-α conducts its replicative effects on immune cells via the latter [19-21]. Till date, several polymorphisms within the promoter region of TNF-α gene have been shown to be associated with susceptibility or resistance to TB in different ethnic groups [22-26]. In contrast, the co-relation of TNF-α gene with their receptors like TNFR2 in susceptibility to TB has not been resolved yet. In this study, we aimed to analysis the SNPs in TNF-α gene at -238, -308, -857 and -863 positions and compare the susceptibility to TB with polymorphisms at TNFR1 (A36G) and TNFR2 (T587G). To our knowledge this is the first report that investigates the TNF-α gene polymorphisms with their two receptors in susceptibility to pulmonary tuberculosis.

Through a cross-sectional study, 151 TB cases and 83 healthy people as controls were recruited and people with history of malignancy and/or autoimmune diseases were excluded. Patients and control subjects were matched for age, sex and nationality (The Institutional Review Board at the NRITLD approved the study and all the patients have signed informed consent). All the TB patients were confirmed by smear microscopy and culture examination. 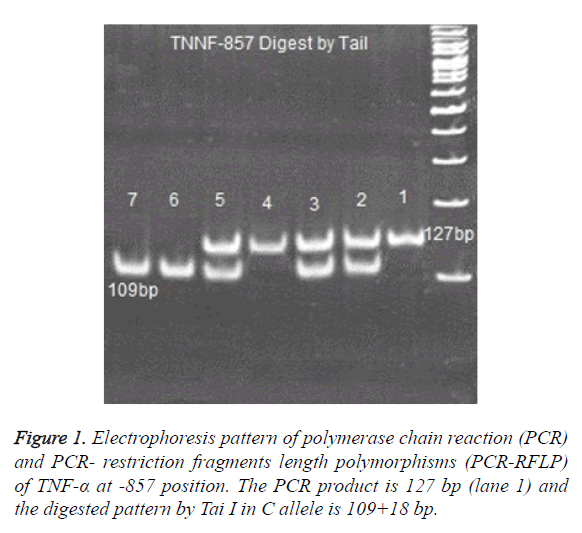 Figure 1. Electrophoresis pattern of polymerase chain reaction (PCR) and PCR- restriction fragments length polymorphisms (PCR-RFLP) of TNF-α at -857 position. The PCR product is 127 bp (lane 1) and the digested pattern by Tai I in C allele is 109+18 bp.

For TNFR1 polymorphisms at 36 positions, the following primers were used to amplify a 183 bp product: A: 5′- GAC CCC AAA TGG GGG AGT GAG AGG-3′ and- B: 5′-ACC AGG CCC GGG CAG GAG AG-3′. PCR products of TNFR1 digested with 2 U enzymes of Mspal. Digested products were run on 8% polyacrylamide gel and were stained with Silver- Nitrate (Figure 2). 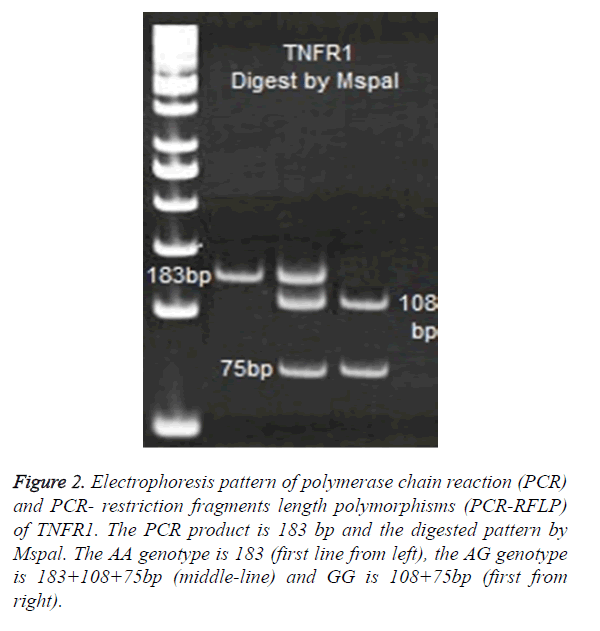 Figure 2. Electrophoresis pattern of polymerase chain reaction (PCR) and PCR- restriction fragments length polymorphisms (PCR-RFLP) of TNFR1. The PCR product is 183 bp and the digested pattern by Mspal. The AA genotype is 183 (first line from left), the AG genotype is 183+108+75bp (middle-line) and GG is 108+75bp (first from right).

For TNFR2 polymorphisms at 587 positions, the following primers were used to amplify a 242 bp product: 5’-TTCTGGAGTTGGCTGCGTGT-3’ and- ACTCTCCTATCCTGCCTGCT-3’. PCR products of TNFR2 digested with 2 U enzymes of NLA III. Digested products were run on 8% polyacrylamide gel and were stained with Silver- Nitrate (Figure 3). 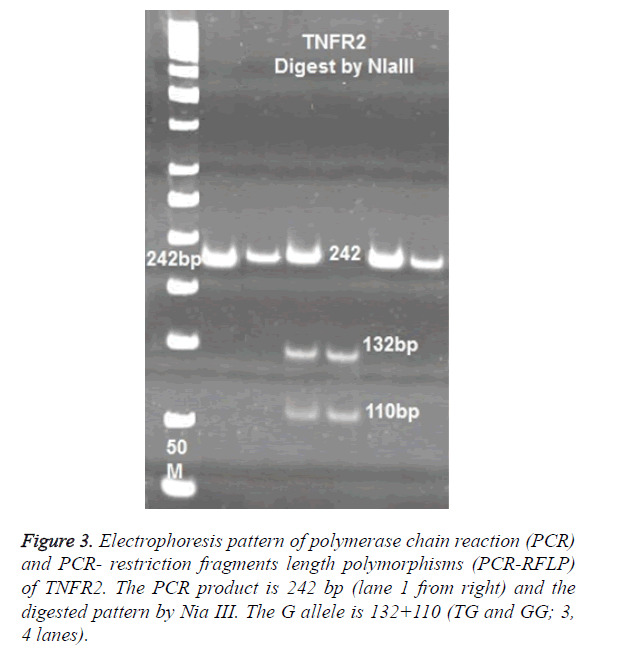 Figure 3. Electrophoresis pattern of polymerase chain reaction (PCR) and PCR- restriction fragments length polymorphisms (PCR-RFLP) of TNFR2. The PCR product is 242 bp (lane 1 from right) and the digested pattern by Nia III. The G allele is 132+110 (TG and GG; 3, 4 lanes).

All the patients with positive TB smear and culture were explained for the aim and process of the research project before giving their informed consent and the private and personal information were secured by the investigators. There was no limitation to quit the study and patients and controls paid no cost for genetic tests.

Table 1. The allele and genotyping frequencies of TNF-α gene, TNFR and TNFR1.

No significance differences were observed in allele A and G between patients and control cases (Table 1). The frequency of AA genotypes was 57% (48/83) in control and 52% (79/151) in TB patients. Therefore, the most frequent allele in TNFR1 at 36 position was A allele, which observed in 77% of controls and 76% of patients (Figure 2).

Correlation of TNF-α and TNFR2 SNPs with TB susceptibility

The current study found a strong correlation between two polymorphisms in different loci of TNF-α gene including 857 C/C (85, 56.2%) and TNF 238 A/A 127 (84.1%). Although, no association between polymorphisms of TNF-α gene and its receptor i.e., TNFR2 (Table 1) was detected. For decades, several reports illustrated different association between genetic polymorphisms and susceptibility to a wide range of infectious diseases such as tuberculosis. Recently Yi et al. performed a meta-analysis on TNF-α polymorphism and its association with pulmonary TB susceptibility [23]. This study evaluated and analyzed 18 previously studies which compromised a total of 2735 cases and 3177 controls. Among various positions in promoter region of TNF-α gene they could outlines the protective roles of TNF-α SNPs at position -857 C>T, -308 G>A, 238 G>A in different ethnical populations e.g., TNF-α SNPs at -308 G>A position is more in Africans origin than Asian [20]. In contrast, the -238 G>A was associated with PTB among Asians. In this regard, Varahram et al. showed the importance of -308 G>A polymorphisms in Iranian PTB patients [26]. But in present study, the frequency of G to A study was 92.7%, 90% and 7.3%, 10.0% in control and patients, respectively. As the number of studied cases in present study was higher, we thereby conclude TNF-α SNPs at -308 G>A position may not be associated with Iranian PTB. More recently, Jafari et al., showed an association between 14 gene polymorphisms and PTB [21]. They found that TLR4 (D299G and T399I) as well as TNF-α (-308 G>A) may influence the risk of PTB [28]. In this regards, Joshi et al., studied synergistic or prognostic role for cytokines like TNF-α t in three groups of individual including pulmonary TB patients, their household contacting people and healthy individuals [29]. They found significantly higher TNF-α serum levels among patients and their caregivers than healthy people. The significant ratio of TNF-α /IL-10 determined Th1 predominance in PTB patients and caregivers as well. Lee et al. released a research report on the role of TNF-α polymorphisms in PTB susceptibility among European, Asian and Middle Eastern population [24]. They introduced TNF-α -857 T as a protective factor for PTB in Asians (OR=0.682, 95% CI= 0.550-0.846) but no relationship was reported for TNF-α -308 A/G and -238 A/G. Our result showed a higher frequency of C allele in TNF-α -857 (76.21%) in patients than control group (66.3%), which is consistent with some early reports [22,26]. During recent years, it become clear that TNF-α exerts its pleiotropic function by activating signaling cascades via binding to two types of receptors i.e., TNFR1 and TNFR2 [3,16,18]. Generally, TNFR1 is associated with inflammation and tissue degeneration [30,31].

TNFR2, encoded by the tumor necrosis factor receptor superfamily member IB gene (TNFRSFIB), can influence the biological activity of TNF-α both in a membrane- bound and a soluble form. In terms of TNFR2 polymorphisms and the risk of PTB, Moller et al., studied a South African population to find a protective impact of T allele of rs3397 alone and/or the 3’untranslated region haplotype GTT of TNF receptor 2 and concluded a role for TNF and TNF receptor mediated immune responses in the pathogenesis of the named disease [32]. In overall, GTT haplotype was found in an intermediate frequency (26%) among different studied population. We found no association between SNPs in TNFR1 and TNFR2 with susceptibility to tuberculosis. Thereby, further studies are needed to elucidate the functionally importance of both TNFR1 and TNFR2 SNPs.

Despite of the big dilemma and controversy for specific human genome diversity to shift individuals toward getting diseases, hereon, pulmonary TB, there are obvious evidence for their impact. Therefore, multidisciplinary studies with multiracial samples are highly advised to confirm the associations which have been raised during recent decades about the risk of involvement, prognosis and response to treatment regarding different demographic and genetic aspects. Concerning our current study, screening assessments for TNF-α -857 and -308 SNPs in Iran would be important in order to make future decisions for preventive treatments before getting the disease among people who are at high risk considering their genotyping.

The author has no conflict of interest.