Anti-Glaucoma Medications (AGM) become an integral part of every person’s life, from the day; he or she is diagnosed with glaucoma. It is well documented that non-compliance towards glaucoma eye drop medications could result in unnecessary changes to medications or listing for more invasive procedures, increasing risk to the patient and costs to the health-care establishment. Also, glaucoma patients having lower compliance rates are at a higher risk of developing irreversible vision loss due to glaucoma, than patients with strict compliance. So far, there are many studies published, focusing on AGM compliance behavior among illiterate and rural glaucoma patients in India. Hence in this manuscript, we have presented the review of literature on compliance behavior, among literate glaucoma patients from an urban background; and proposed various novel and innovative, cost-effective strategies with augmented reality, real-time moving images, and eye drops reminding mobile applications to strengthen the literate glaucoma patient’s understanding of their disease process and give them a timely reminder about AGM usage.

In 2017, the rural population in the country amounted to about 450 million, and was estimated to reach 506 million in 2022 [3]. 2011 census data revealed that in India, the rural and urban distribution among the population is 72.18% and 27.82% respectively [4]. The national average literacy rate of India is 77.7%, with 64.7% in the rural population and 79.5% in the urban population as of 2014 [5]. Most of the people living in urban areas are expected to be well-read and literate; hence, ophthalmologists tend to expect them to have better compliance and adherence to anti-glaucoma medications (AGM). But the fact is, even urbanization and literacy do not have much impact on AGM compliance [6].

In developed and developing countries, non-compliance towards AGM has been found to be variable [7]. India being a developing country, the focus population for the majority of the compliance studies are illiterate rural glaucoma patients; baring the novel study recently done by Ramesh, et al. on AGM compliance among literate people attending an urban tertiary care center [6]. Ramesh, et al. reported poor compliance and adherence, even among the literate patients [6]. When comparing studies on AGM compliance conducted a few years back with the present-day ones, there was an increase in noncompliance rates [7]. This suggests an urgent need in patient counselling for proper and timely application of AGM, as advised by the treating physician. Literacy and urbanization seem to have no impact on compliance towards AGM therapy, hence, strategies combating compliance issues should also focus on urban literate patients [8].

The forsaken or ignored population, when it comes to studying the AGM compliance behavior

Instillation of AGM is a mandatory part of every glaucoma patient’s daily routine, unless they have undergone any surgical or laser therapy, for achieving their target intraocular pressure. However sincere, the glaucoma patients are, in applying their drops, there is always a possibility of non-compliance during some part during their lifetime. Also, in developing countries like India, patients may have a perception that AGM is costly [9]. Hence, the majority of the studies target the rural, low socioeconomic population, missing out on the higher socioeconomic population. Urban and literate glaucoma patients are also conveniently ignored, when it comes to exploration and assessment of patient’s compliance toward AGM therapy, especially in India. This population may fall in the glaucoma specialist’s blind spot, as ophthalmologists would expect them to be well-read, and be aware of glaucoma and its devastating consequences. So, compliance studies focusing on urban literate Indian population are relatively an untapped area [6]. The literature review also supports this statement.

Currently, there is only one study by Ramesh, et al., which primarily deals with literate primary glaucoma patients, and explores their compliance, and factors related to compliance behavior such as application, purchase, stocking, etc., in South India. Ramesh, et al. has stated that the compliance to AGM was less (49.5%) even among literate patients, who visited an urban tertiary eye care center. The causes for poor compliance among urban literate patients were quite different from the causes of poor compliance among rural illiterate patients. Relative priority (45%), forgetfulness (35%), medications getting over (8%), no reason (6%), emotional factors (4%), and lack of information (2%) were the major culprits among the urban literate glaucoma patients, opening up a new area of psychological and mental lethargy among them, towards AGM compliance, in today’s fast-moving world [6].

Keeping in mind the various reasons for poor compliance and adherence among the literate patients, we devised novel smartphone applications, to combat poor compliance, along with the mandatory clinical counselling. In India, among the population of 1.3 billion, there are 1.8 billion mobile phones with 92.03 connections per 100 citizen; roughly half (49.7%) of the mobile phone users have a smartphone [10,11]. Also, there is no dearth of smartphone usage among literate urban population, as smartphones are commonly used in their day-today living. Hence, we have created strategies to address compliance issues through smartphone applications, thus giving them simplified e-counselling data at their fingertip, in their own space of comfort [12]. We have innovated programs featuring augmented reality (Eye MG AR), real-time moving confocal images (Eye MG 3D), and eye drops reminding mobile applications (Eye Drop Reminder Lite) to strengthen urban literate glaucoma patients’ understanding of their disease process, and give them a customized timely reminder about their AGM usage.

Clinical counselling can be done using our novel mobile apps such as Eye MG 3D & Eye MG AR (Figures 1 and 2) [13,14]. Also, we have innovated an app (Eye Drop Reminder Lite) for reminding the time of AGM applications, through customized notifications, whenever it’s due (Figure 3)[15]. According to our experience with these applications, patients understood their disease process and importance of therapy in a better way, and are more likely to be adherent to their medications. A prospective survey of patients attending their glaucoma followup across two sites (Moorfield’s South at St Georges Hospital and Princess Royal University Hospital) revealed, 8/50 (16%) patients admitted to missing eye drops [16]. 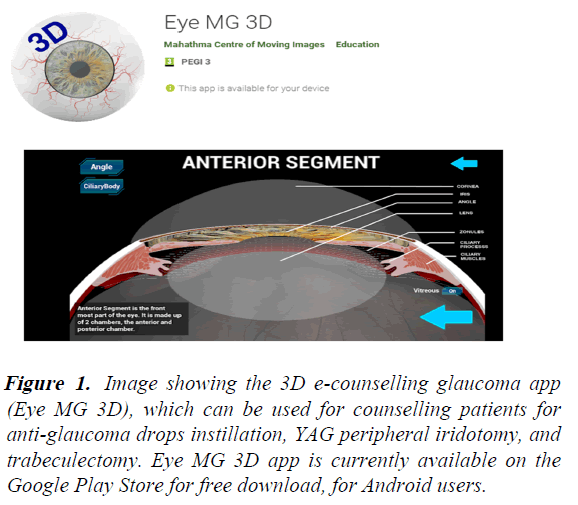 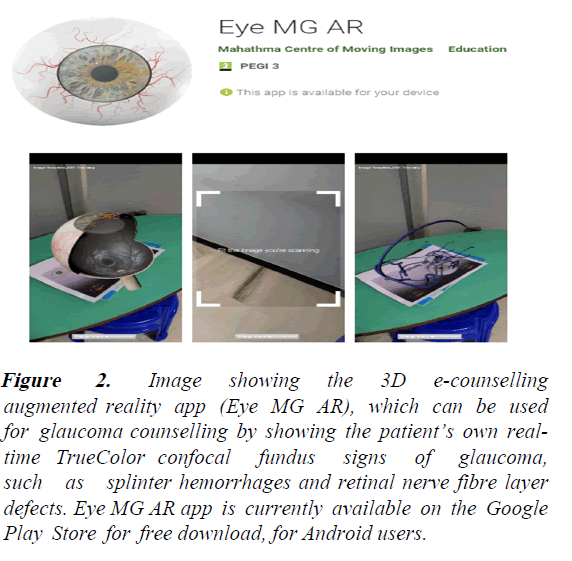 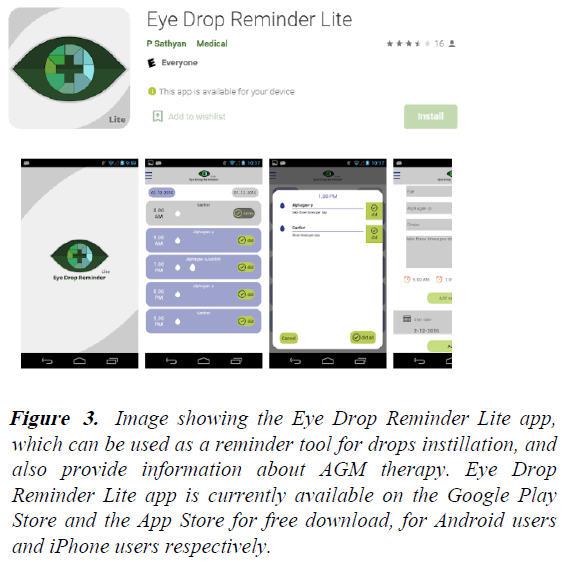 The main reasons were difficulty in remembering drops, unsure which drops to take and running out of drops. Out of those 50 patients who completed the questionnaire, 41 (82%) had access to computer technology; out of which 18 patients (44%) had access to a smartphone. Out of those who responded, 26/43 (60%) said that they would use a medication adherence app for strengthening their AGM compliance [16].

Although, it is often perceived that glaucoma patients of developing countries have limited access to smartphones, a large proportion of urban literate patients of developing countries do have access to smartphone technology and are willing to use them to improve their health outcomes. Hence, proper counselling, educative and AGM application reminder tools, will give patients the confidence to rely on AGM for their lifetime, with good and effortless compliance. However, to what degree non-compliance affects the progression of glaucoma and visual field defects is a grey area, and we are currently in the process of developing an app that may help to answer this question.

The unique selling point (USP) of this manuscript is the implication of the three innovative mobile applications created by us, in the field of glaucoma to improve patient healthcare. These three applications are free to download for all smartphone users and help strengthen compliance to AGM.

These high-tech counselling tools are not easily accessible for glaucoma patients from rural areas, where smartphone users are hard to find. However, they can work wonders in an urban literate population, who knows in and out, how to use a smartphone. Since in this manuscript, we are addressing the compliance issues faced by the urban literate glaucoma population, these gadgets and technology will help in delivering fruitful results among them. However, one should bear in mind, similar strategies may not work among the illiterate and rural populations. To conclude, further studies should be carried out in the future, focussing on urban and literate glaucoma patients in India, and different strategies should be framed accordingly for that population, who has so far conveniently fallen in our blind spot.

The authors certify that they have obtained all appropriate patient consent forms. In the form, the patient has/have given his/her/their consent for his/her/their images and other clinical information to be reported in the journal. The patients understand that their names and initials will not be published, and due efforts will be made to conceal their identity, but anonymity cannot be guaranteed. 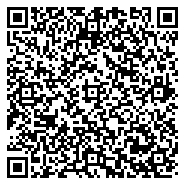