Colonic intussusception caused by an ulcerating lipoma in an adult: A rare case report and literature review

#These authors contributed equally to these work

Intestinal lipomas are rare nonepithelial tumors that are typically small in size and detected incidentally. Colonic intussusception is an uncommon complication of colonic lipoma. A 56 y old woman visited our emergency room with sudden onset of intermittent abdominal cramps. A CT scan showed a 5.0 cm, nodular, homogenous, hypodense structure in the hepatic flexure of the colon as the lead point of an intussusception. The hypodense structure was suggestive of a colonic lipoma, and the tumor was suspected to be the cause of the intestinal intussusception. Laparoscopic exploration was performed, and the pathology demonstrated a mature submucosal colonic lipoma. In addition to the case report, we discuss the role of imaging modalities in diagnosing neoplasms and for assessing the clinical behavior of lipomas when symptomatic.

Colonic lipoma is a rare benign tumor with a reported incidence ranging from 0.15% to 4.4% [1]. The most common position of colonic lipoma is the right hemicolon, followed by the descending and transverse colon. Although the majority of colonic lipomas are small and asymptomatic, some cause symptoms such as abdominal pain, diarrhea, bowel obstruction and intussusception [1,2]. Here, we present a case report of a giant colonic lipoma causing ascending-colonic intussusception and discuss the role of imaging modalities for diagnosing neoplasms to assess the clinical behavior of lipomas when symptomatic.

The patient described in this case report provided written informed consent for both the report and the accompanying images.

A 56 y old woman with a 5 y history of obstipation and intermittent abdominal pain was admitted to the emergency department. Her abdominal pain had been exacerbated in the past week and was accompanied by a change in bowel habits. Mucous and blood were present in the stool starting three days prior to admission. Moderate, paroxysmal and cramp-like pain was present in the right hypochondrium and radiated to the back, without signs of peritonitis. She did not report any history of anemia, dyspeptic symptoms, episodes of diarrhea, or rectal bleeding. No disease history was reported. The physical examination was unremarkable. Laboratory test results showed elevated inflammatory parameters and a high

level of C-reactive protein (10.8 mg/l). Tumor makers were within the normal ranges. She also underwent Digital Radiography (DR) and Computed Tomography (CT) examinations of the abdomen. The DR showed no obvious abnormalities. The CT scan showed a 5.0 cm, nodular, homogenous, hypodense structure in the hepatic flexure of the colon, suggestive of a colonic lipoma (Figure 1A), as a lead point of an intussusception (Figure 1B). The lipoma was suspected as the cause of the intestinal intussusception, and laparoscopic exploration was performed. Subsequent histopathological examination confirmed that the mass was a lipoma with ulceration and reactive changes without evidence of malignancy (Figure 2). A segment resection was performed in the hepatic flexure of the colon with end-to-end anastomosis. The postoperative course was uneventful, and the patient was discharged from the hospital on the 7th postoperative day. The patient was in a healthy condition after 1 year of follow-up. 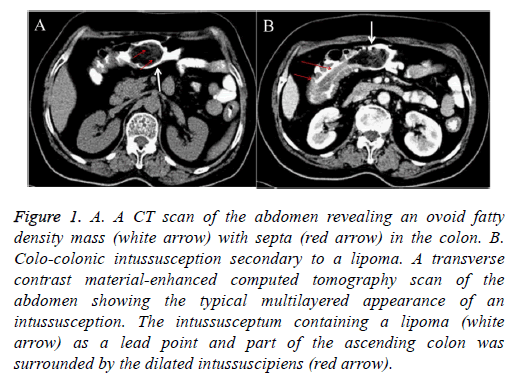 Figure 1: A. A CT scan of the abdomen revealing an ovoid fatty density mass (white arrow) with septa (red arrow) in the colon. B. Colo-colonic intussusception secondary to a lipoma. A transverse contrast material-enhanced computed tomography scan of the abdomen showing the typical multilayered appearance of an intussusception. The intussusceptum containing a lipoma (white arrow) as a lead point and part of the ascending colon was surrounded by the dilated intussuscipiens (red arrow). 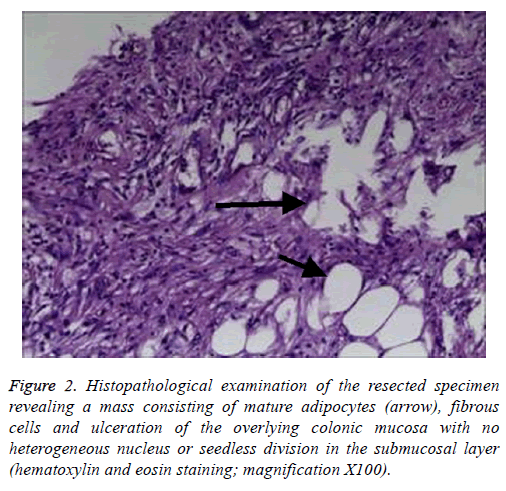 Figure 2: Histopathological examination of the resected specimen revealing a mass consisting of mature adipocytes (arrow), fibrous cells and ulceration of the overlying colonic mucosa with no heterogeneous nucleus or seedless division in the submucosal layer (hematoxylin and eosin staining; magnification X100).

Lipomas are the most common non-epithelial neoplasms of the gastrointestinal tract and can be found in any part of the gut [1-3]. Colonic lipomas are benign submucosal tumors composed of mature adipose tissue and were first reported by Bauer in 1757 [2,3]. After reviewing the literature for the most recent cases (Table 1) [1-13], we concluded that most lipomas range in size from 2 mm to 30 cm and that the majority of patients are between 50 and 70 y of age, with a female predominance. Colonic lipomas are typically asymptomatic or minimally symptomatic when less than 2.0 cm in size, and they are usually detected during endoscopy, surgery, or autopsy. A prior study indicated that only 32% to 50% of cases are diagnosed preoperatively [4-5]. In contrast, large lipomas generally produce symptoms, including abdominal pain, diarrhea, bowel obstruction, and obstipation. These symptoms are primarily caused by chronic intermittent ileocolonic or colo-colonic intussusceptions [5-8]. Furthermore, large lipomas can have ulcerations and may cause gastrointestinal bleeding as a result of pressure necrosis in the overlying mucosa [4].

Imaging modalities can aid in the preoperative diagnosis of colonic lipomas. Barium enemas usually show ovoid, welldemarcated filling defects and smooth sub-mucosal masses [7-9]. The "squeeze sign" describes when a lipoma adopts a fusiform appearance with colonic peristalsis; such deformation can result from external pressure or peristalsis. During colonoscopy, colonic lipomas typically appear as a submucosal mass covered by intact mucosa. Elevation of mucosa using biopsy forceps ("tent sign"), indentation of mucosa after pressing on it ("cushion sign"), or extrusion of fat after biopsy ("naked fat sign") are also observed [10-12]. Lipomas can be difficult to differentiate from a malignant lesion due to the associated necrotic mucosa, ulceration, and relatively hard texture of the lesion. When a lesion is actively bleeding, endoscopic biopsy may not be safe or reliable. In most cases, CT can clearly reveal the characteristic fatty densitometric features of lipomas and definitively diagnose intestinal lipomas, avoiding unnecessary endoscopy or surgery. On CT, lipomas usually appear as well-circumscribed submucosal masses with homogeneous fat attenuation and thin fibrous septa. CT can also detect colonic lipoma complications, such as intussusception. However, intussuscepted lipomas may not demonstrate normal fat attenuation and may have a heterogeneous appearance reflective of the degree of infarction and fat necrosis present at the time of radiologic evaluation. If prominent fibrous septa and modularity are evident, the imperative differential diagnosis is liposarcoma [4]. Magnetic Resonance Imaging (MRI) is particularly suited to detecting fatty lesions because signal intensity characteristics typical for adipose tissue are evident on T1-weighted and fat-suppressed images. However, MRI is seldom used for detecting and studying intestinal neoplastic lesions [1-2,13,14].

There is an urgent need for doctors to address symptomatic patients with large lipomas who are developing intussusceptions. Ultrasound is a suitable method for this purpose because it is easy to perform, reproducible, and less invasive than other methods. On ultrasound, an abdominal mass with a “donut” or “target” sign in which the outermost layer represents the sheath and the multilayer ring structure represents the invaginated intestinal segment, is pathognomonic for the presence of an intussusception [13,14]. Recent reports have shown that abdominal CT scanning has a diagnostic sensitivity of 58-100% and a specificity of 57-71%, and this method is considered the “gold standard” for diagnosis [6,7]. CT can clearly reveal the typical characteristics of uniform tumor density with thin septa, clear borders, and no enhancement. Additionally, a “target” sign or “sausageshaped” mass on CT, depending on the angle of the beam relative to the intussusception, represents an inner central area of invaginated intussusceptum that is surrounded by mesenteric fat and associated vasculature, all of which are surrounded by the thick-walled intussuscipiens. In the case of lipoma, the tumor is the lead point within the lumen of the intussuscipiens. Mesenteric vessels within the bowel lumen are also typically observed. Because of the ability to visualize these features, CT findings are very helpful when operating.

Asymptomatic small lipomas may not require intervention. Though spontaneous expulsion of lipomas through the rectum has been reported [5,11,14], a small subgroup requires surgical intervention, including those with suspected malignancy, symptomatic lipomas, surgical emergencies such as intussusceptions, and obstruction with ulceration and bleeding [7]. The management strategy for colonic lipomas mainly depends on the size, clinical symptoms, and preoperative diagnosis.

The indication of endoscopic resection of colonic lipomas is still a subject of controversy [8]. Various endoscopic procedures including snare resection, ESD, and unroofing or the endoloop technique have been introduced recently for safe resection. Khorashad et al. and Geraci et al. suggest that endoscopic removal of colonic lipomas larger than 2 cm, even if is technically difficult because of their vascular nature, large pedicle, and size, is safe, feasible and effective using standard polypectomy technique with the availability of endoloop and hemoclips in case of uneventful complications or to prevent it [10,12].

Recently, laparoscopic procedure and minilaparotomy approach were reported as an alternative to conventional laparotomy used in removal of large colonic lipomas with all the known advantages of minimally invasive procedures [8]. In the article, there is a case about adopting laparoscopic procedures to excise the large colonic lipoma which goes well, and the postoperative recovered well.

Symptomatic colonic lipomas are very rare and present with a variety of symptoms depending on location and size, often leading to misdiagnosis. A correct and timely diagnosis is important to avoid complications. CT can assist in providing confirmatory diagnosis of a colonic lipoma. Surgical resection remains the treatment of choice, with an excellent prognosis and no reports of recurrence.

We acknowledge all the doctors who helped with this work. This work was supported by the Science and Technology Bureau of Huai’an, Jiangsu Province, China (HAS2014009-3).