Introduction: Childhood acute lymphoblastic Leukemias (ALL) is relatively rare in sub-Saharan Africa but probably underdiagnosed. The aim of this work was to describe the epidemiological, clinical, and therapeutic aspects of ALL in the pediatric oncology unit of Bamako.

Patients and Methods: It was a retrospective, descriptive study on 33 children with ALL, treated at the pediatric oncology unit of Bamako according to a protocol developped by the French African Pediatric Oncology Group (FAPOG).

Results: The mean age of patients was 10 years with extremes of 2 and 15 years and a sex ratio (M/F) of 3.7. The majority of patients were over 5 years of age (79%). Clinically, pallor was noted in 72% of cases, fever in 79% and 24% had a hemorrhagic syndrome. Biologically, the tumor lysis was present in all patients, all patients hemoglobin level less than 10 g/dl, 91% had thrombocytopenia and 51% had leukocytosis (>50 Giga/l). Complete remission at the end of induction was 64%, with 27% of early deaths. After a mean follow-up time of two years, we recorded 12% of loss of follow-up and 82% of deaths. The global survival was 6%.

Conclusion: Childhood ALL have a very poor prognosis in Mali. Early diagnosis and adapted protocols to high risk patients will help reduce early deaths and improve the survival of patients in remission.

Acute lymphoblastic leukemia is the result of clonal and malignant proliferation of lymphoid precursors in the bone marrow, accompanied by an arrest of maturation [1,2]. The result is a picture of bone marrow failure and tumor syndrome. This is a medical emergency, the presentation of which is most often brutal with a high risk of death in the absence of rapid and appropriate care. In Europe and North America, acute leukemia’s are the most common malignant diseases of children [3]. They constitute the first cause of death of the child by cancer in these countries. In these developed countries, treatment currently helps to cure nearly 80% of children with ALL [1].

In Sub saharan Africa, data on childhood ALL are extremely rare because of a shortage of trained personnel and inadequate diagnostic facilities [4]. In one of our previous study in 2013, at the pediatric oncology unit in Bamako, ALL was the fourth pediatric cancer in terms of frequency after lymphoma, retinoblastoma and nephroblastoma [4]. Its prognosis remains pejorative in most African countries with a survival rate rarely reaching 15%. This high mortality is most often due to a delay in care and a high drop-out rate [4]. The aim of our work was to evaluate the treatment results of children with ALL at the pediatric oncology unit in Bamako, Mali.

This was a retrospective, descriptive and monocentric study performed at the pediatric oncology unit (UOP) of Gabriel Touré teaching hospital, from January 1, 2010 to December 31, 2014. This facility is the unique pediatric cancer treatment centre of the whole country. The study focused on the records of children with ALL.

The diagnosis was based on the results of a biological assessment that included blood cells count, bone marrow cytology and peripheral blood smear. Some examinations like immunohistochemistry, karyotyping or molecular biology were not available in our facility.

Patients were treated according to the protocol developed by the French-African Pediatric Oncology Group (FAPOG) in 2006 for treatment of standard risks ALL cases [5]. Our unit is a member of this group which has its head office at the Institut Gustave Roussy (IGR) in Paris, France. The FAPG provides free anti-cancer drugs, antibiotics and equipment that we need to treat our patients.

The standard risk was defined by as followed: age between 1 and 15 years, absence of mediastinal involment and leucocytes less than 100000/mm3. The high risk was defined by age less than 1 year or more than 10 years, leucocytes more than 100000/ mm3. The neuro-meningeal involment was assessed by the presence of neurologic abnormalities and/or by the detection of blasts in the cerebrospinal fluid. The parameters studied were: age, sex, reason for hospitalization, consultation time, clinical and laboratory parameters, type of ALL, toxicity of chemotherapy, overall survival.

During the study period, 753 children with cancer were admitted to our pediatric oncology unit. We recorded 57 cases of leukemia including 33 cases of ALL (4.4% of pediatric cancers). Thus, ALL accounted for 58% of pediatric acute leukemia. The majority of patients resided in Bamako (61%).

The mean age of patients was 10 years with extremes of 2 and 15 years. Children over 5 accounted for 79%. Boys accounted for 79% and girls 21% with a sex ratio (M/F) of 3.71. The concept of recurrent infections was found in 33% of patients. The main reasons for consultation were pallor and fever (79%). The average time for medical consultation was more than one month. Signs related to bone marrow failure were recorded in 29 patients (89%). Lymphadenopathies and splenomegaly were seen in all patients (Figure 1). 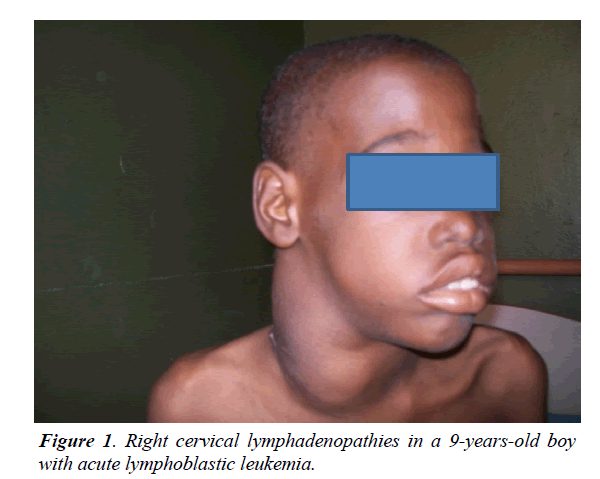 Neuro-meningeal damage was observed in 12% of patients. Testicular infiltration was noted in 12% of boys. The abnormalities observed at the BCC were: anemia (100%), thrombocytopenia (91%), leukocytosis (52%), leukopenia (45%) and pancytopenia (46%). The average level of circulating blasts was 80%. The myelogram showed 21% of ALL2 and 55% ALL1. Since immunophenotyping was not available, the B or T type was unknown.

In our series 7 patients (21%) were classified in the standard risk group while 26 patients (79%) were in high risk. All our patients were treated according to the FAPOG ALL protocol. A transfusion support was necessary for 94% of our patients. Infections and hematologic complications were observed in all patients. In almost 4 years of follow up, the complete remission rate was 21%. The mortality rate was 82%, four patients (12%) were lost of follow up and 15% had hematologic relapse.

Childhood acute lymphoblastic leukemia is rarely diagnosed in sub-Saharan Africa because of lack of trained professionals and poor technical plateau [6]. Thus, the incidence of ALL in the pediatric oncology unit of Gabriel Touré Teaching Hospital was underestimated (4.5% of pediatric caners). Many children with leukemia die in the countryside before reaching a medical center. Nevertheless, the incidence of Childhood acute lymphoblastic leukemia in Sub Saharan Africa seem low.

In developed countries, acute leukemias account for 30% to 40% of pediatric cancers and ALL represents approximately 80% of childhood leukemias [1]. In Morocco this rate is 27% of pediatric cancers at the center of pediatric hematologic oncology in Rabat [7]. Factors associated with early stimulation of the immune system (breastfeeding, exposure to infectious agents, normal delivery, and exposure to early-life animals) may reduce the risk of ALL [8]. These factors largely prevalent in Africa may explain in part, the low incidence in this part of the world. Familial or congenital cases of ALL reported in the literature have not been found in our series [1].

The mean age at diagnosis of our patients was statistically higher (10 years) than that of patients in Western countries with mean age <5 years [1]. Children over the age of 10 typically have a poorer prognosis than younger children [2].

In the Mukibi et al. [9] Study, in Malawi, ALL were more common among children over 5 years of age. In Nigeria, too, with Williams et al. study, the highest incidence was founded in the age group of 10-14 years [10].

The male sex is considered a factor of poor prognosis compared to the female sex. All authors are unanimous on the male predominance in this condition and boys are more likely to relapse (especially testicular) [7]. In the Mbensa study in Congo, boys accounted for 63% of patients and Bouhnoun in Rabat found 61% of boys [7,11].

The majority of our patients come from the urban area of Bamako because of the proximity and its wealth of medical resources. These same reasons were mentioned in a Moroccan study in Rabat [7]. Children with acute lymphoblastic leukemia usually consult for the following signs and symptoms: fatigue, fever, persistent infection, haemorrhagic signs, bone pain, arthralgia or lymphadenopathy but due to late presentation, patients were often admitted a malnutrition state [12].

In our context, fever and pallor are very often seen with severe malaria or other tropical diseases. This diagnostic wandering makes the patient's journey more sinuous. This late diagnosis may even explain the magnitude of the tumor lysis syndrome in our series. In the study of Bouhnoun in Morocco, the tumor lysis syndrome was found in 73% of patients and Togo B in a previous study found 83%. Bone pains were observed in 54% of our patients contrary to the Bouhnoun study in Morocco where signs related to bone and articulations accounted for only 4% [7,13].

Testicular infiltration, gingival hypertrophy and neurological signs were rarely reported in our files, Mbensa does not mention it in his study too, but Bouhnoun found 5% neurological involvement [7,11]. Skin, ocular or ovarian involvement are rare and had not been observed in our study. Hematologic abnormalities in our patients were mainly anemia (100%), thrombocytopenia (91%), and leukocytosis (52%). These results are dissimilar to those of European literature. Hyperleukocytosis is a factor of poor prognosis. In the same way our patients had circulating blasts rate higher than 80% contrary to the Moroccan study.

About morphologic classification and according FAB criteria ALL1 is reported to be predominant in the literature, where it accounts for 60% to 80% of our cases whereas ALL2 were 15% to 30%. In the previous performed in our same center, we found 50% of ALL1, 41% ALL2 and 8% ALL3 [13]. In this series, the distribution is different with 55% of ALL1 and 21% of LAL2. Age at diagnosis less than one year and more than nine years, white blood cells more than 50,000/mm3 at diagnosis, T cell acute lymphoblastic leukemia, adverse cytogenetics (such as hypodiploidy, the presence of the Philadelphia chromosome or a rearrangement of the MLL gene) and minimal residual disease are major predictors of good and poor response to treatment [14-16]. Specific techniques such as immunophenotyping, cytogenetics and molecular biology are not feasible in Mali while these examinations are necessary for the confirmation of the diagnosis, for the indication of a more adapted treatment and even for the follow-up of the disease [17]. The initial response to treatment remains the main prognostic factor in our context [1]. The majority of our patients had at least one poor prognostic factor. Patients with poor prognosis should be treated aggressively; while our patients have been treated according to the ALL GFAOP protocol which is chemotherapy adapted to local conditions for standard risk ALL [17-20]. The complete remission rate reaches 90% in developed countries. It was 21% in our study. This rate is as low as 5% in some sub-Saharan countries [9,10].

In our series, deaths were due to infectious and or drugs toxicities (57%), unlike in developed countries where deaths are generally due to relapses. This high mortality rate could also be explained by the inadequacy of the proposed protocol, the late diagnosis, the difficulties of access to supportive care and the irregularity in the monitoring of treatment. Similar findings were already in our study of 2011.