Changes in central corneal thickness before and after phacoemulsification cataract surgery

Aim: To evaluate the effect of an uneventful phacoemulsification surgery on Central Corneal thickness (CCT).

Methods: 77 consecutive patients who had an uneventful phacoemulsification surgery by the same experienced surgeon were prospectively evaluated for Intraocular Pressure (IOP) and CCT measurements 1 day preoperatively and 1 day, 1 week and 1 month postoperatively.

Conclusion: The mean CCT substantially increases after post-operative uneventful cataract surgery but returns to normal baseline values in almost all operated eyes in 1 month time. IOP measured during this period may be falsely higher than the true values due to increased CCT and thus not all IOP rises have to be treated during this period.

The corneal endothelium plays an important role in maintaining corneal transparency. Deturgescence of the corneal stroma is controlled by the pumping action of the endothelial layer and can be monitored by measurement of central corneal thickness (CCT). Studies have shown that intraocular surgeries affect corneal endothelial density. Interest has therefore developed in the assessment of endothelial damage either by cell counts or indirectly by measuring corneal thickness postoperatively. Central corneal thickness (CCT) increases significantly immediately after cataract surgery and gradually returns to normal values over the next few weeks [1,2]. CCT is an important predictor of IOP [3,4]. Thicker the cornea, greater the false IOP readings.

The purpose of this study is to describe changes occurring in central corneal thickness before and after uneventful phacoemulsification surgery.

This Prospective observational study involved 77 patients that presented to the Department of Ophthalmology in Father Muller Medical College hospital, Kankanady. The study was conducted over a period of 2 months.

Excluded from the study were patients with corneal degeneration, corneal dystrophy, corneal opacity, traumatic or complicated cataract and those with high pre-operative astigmatism of ≥ 2.5 D. Other excluded patients were those who have had refractive surgeries, those with only one eye, those with operative complications such as vitreous loss, and those who declined participation in the study.

A written Informed consent was obtained. Patient was explained about the procedure in their own understandable language. Brief history and clinical examination was carried out in every patient. IOP was recorded using Goldman ’ s applanation tonometer and CCT was measured using Ultrasonic Pachymeter under topical Anaesthesia (proparacaine HCl 0.5%). Measurements were taken prior to surgery and at follow-up at 1, 7, and 30 days postoperatively.

Mydriasis was obtained before surgery with Tropicacyl plus eye drops (tropicamide 0.4%, phenylephrine hydrochloride 5% and Chlorbutol 0.5%). Under topical anaesthesia with proparacaine HCl 0.5% and a peribulbar block, a clear cornea 2.8‐mm incision was performed. Sodium hyaluronate was used as viscoelastic substance. Phacoemulsification of the nucleus was performed with an Alcon Infinity unit, using phaco‐chop technique, followed by the aspiration of cortical remnants and polishing of the capsular bag. A foldable onepiece acrylic intraocular lens was implanted in the capsular bag using an injector. The viscoelastic substance was aspirated meticulously using an irrigation/aspiration tip. Main incision was left suture less.

Paired‘t’ test was used to analyse the IOP changes before and after Phacoemulsification (Table 1).

Table 1. IOP changes before and after phacoemulsification.

Repeated measures ANOVA and Turkey HSD test was used to compare the changes in the mean CCT over time (Table 2).

Table 2a. Anova summary: Changes in mean CCT before and after phacoemulsification.

Table 2B. Tukey HSD Test: Changes in mean CCT before and after phacoemulsification.

A total of 77 patients that underwent a clear corneal phacoemulsification surgery were enrolled in this study out of which 41(53%) were men and 36(47%) were women; mean age of the study population was 61. 58 ± 9.46 years (Figure 1). 44% of the patients had comorbidities-Diabetes only {8%}, Hypertension only {8%} or both{28%. Twentyfour right and Fifty-three left eyes were operated on and analysed. 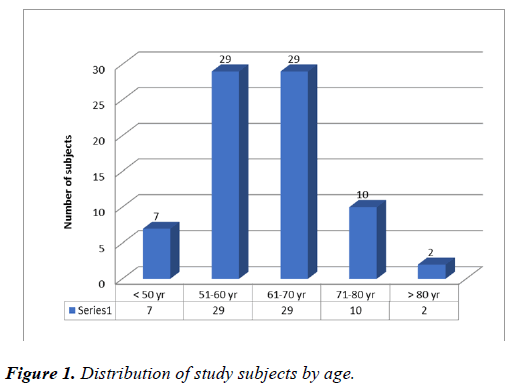 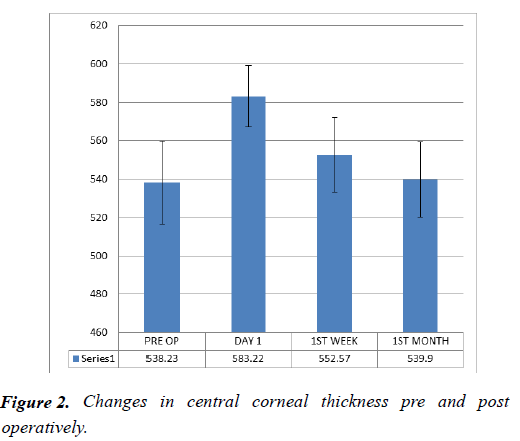 Figure 2: Changes in the IOP pre and post operatively. 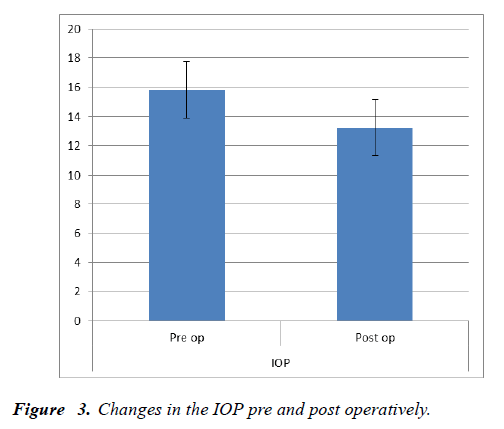 Figure 3: Changes in the IOP pre and post operatively.

The cornea is composed of six layers: epithelium, Bowman’s layer, stroma, Dua ’ s layer, Descemet ’ s membrane and endothelium. The stroma has a tendency to swell under normal physiological conditions. This swelling is prevented by active fluid pumping of the endothelium, thereby assuring maintenance of normal thickness and transparency of the cornea [5].

Michaeli et al. [8] compared CCT and endothelial cell loss after phacoemulsification with clear cornea and scleral tunnel incisions. They found that corneal thickness increased significantly in all measurements postoperative and returned to baseline by 3 months and there was no difference in the pachymetry change between the two study groups.

[3,4] Other research studies showed that CCT returned to normal in most operated eyes following an initial increase 1 week after an uneventful cataract surgery. Our study showed a marked increase in the mean CCT after uneventful phacoemulsification surgery that returned to normal baseline values in majority of the operated eyes at 1 week, touching near normal baseline values at 1 month. Compared with the baseline, there is a mean increase in CCT of 44.99 μm at 1 day, and 14.34 μm at 1 week, and 1.67 μm at 1 month. The mean increase at day 1 was higher than that reported by others like Salvi et al. [1] reported a mean increase of 3.15 μm at week 1.

• Difference in the population studied

IOP measured postoperatively in the 1st week may be falsely elevated due to increased CCT in the immediate postoperative period; thus, not all IOP rises have to be treated in this period in healthy uncompromised eyes.

• Returns to normal baseline values in almost all operated eyes in one month time.

• Caution to be taken while interpreting the results of intraocular pressure measurements during this period.

One of the limitations in our study was that it was not randomized. Secondly, only one technique of phacoemulsification was used; results may have varied if other techniques were used. Thirdly, Ultrasound pachymetry was taken instead of specular microscopy for documenting endothelial dysfunction. Measurements estimated by ultrasonic pachymetry are more variable.