Cancer Stem Cells (CSCs) are a special kind of cancer cells that have the ability of self-renewal and differentiating to other cells [3]. CSCs have been found in many human malignant tumors including rectal cancer [4-6]. Recent studies reported that CSCs has strong resistance to CRT, and some researchers believed that the CRT resistance of CSCs is caused by abnormal CD133 expression level [7,8]. CD133 is a kind of transmembrane glycoprotein. It was found that CD133 is the positive biomarker of CSCs. CD133 positive colorectal cancer cells may form tumor again after surgery and CRT [9,10]. This study intends to explore CD133 expression in rectal cancer and its correlation with CRT resistance.

A total of 56 cases of rectal cancer patients in the Affiliated Quanzhou First Hospital, Fujian Medical University between January 2009 and March 2016 were enrolled with the mean age at 63.6 ± 9.5 y old. All the patients were graded according to the TNM staging. There were 19 cases in stage II and 37 cases in stage III. All the rectal patients received total mesorectal excision combined CRT. Another 40 cases of rectal cancer patients that did not receive CRT were selected as control.

The study protocol was approved by the Affiliated Quanzhou First Hospital, Fujian Medical University, and all patients gave their informed consent before study commencement.

Cell and tissue RNA extraction kit was from QIAGEN. RTPCR kit was from TIANGEN. Gel imaging system was provided by Shanghai Peiqing technology co., LTD. Antibodies were from Proteintech. DAB color-substrate solution was from Boster.

The patients received total mesorectal excision at 6~8 w after CRT. The samples were collected in the surgery and stored in liquid nitrogen or fixed. The samples were sliced for histological grading and immunohistochemistry.

CD133 overexpression vector pcDNA3.1-CD133 was constructed based on pcDNA3.1 according to human CD133 cDNA sequence. The vector was transfected to HT-29 cells using lipofectamine INTERFERinTM transfection reagent kit (Polyplus transfection) according to the manual.

HT-29 cells in logarithmic phase were digested by enzyme and seeded in 24-well plate. After treated by BRP for 24 h, the cells were collected to extract total protein. The protein was separated by SDS-PAGE and transfected to membrane. After blocked by 5% skim milk, the membrane was incubated in primary antibodies (CD133 and β-actin) and HRP-tagged secondary antibody (1:1000). After developed by DAB, the band was analysed by gel imaging system to calculate the relative expression level [13].

After transfection, HT-29 cells in logarithmic phase were seeded in 100 mm dish at 104 cells. The cells received different doses of radiation at 0, 1, and 2.5 Gy. Then the cells were further cultured in incubator.

HT-29 cells receiving different radiotherapy were digested and seeded in dish with 10 ml medium at 100 cells with three replicates. Then the cells were cultured in incubator 10 days and washed by PBS. Next, the cells were fixed by 2% paraformaldehyde for 15 min and stained by 5% crystal violet for 15 min. Colony number was counted to calculate colony formation rate. Colony formation rate=(clone number/100) × 100% [14].

All the data was presented as mean ± standard deviation. The statistical analysis was performed on Stat View 5.0 software. ANOVA was applied for difference comparison. P<0.05 was considered as statistical significance.

All the rectal patients received immunohistochemical detection to analyse CD133 expression in rectal cancer cells. As shown in Figure 1, there were three types of immunohistochemistry results. Firstly, CD133 negative. Secondly, brown particles appeared on the surface of cavity. Thirdly, brown particles appeared in the cytoplasm. Only the patients with the third result were defined as CD133 positive. 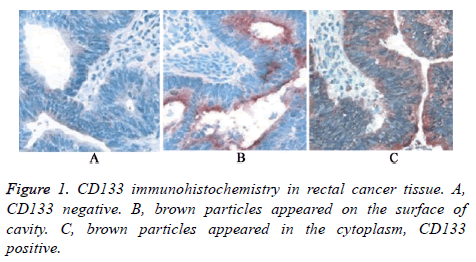 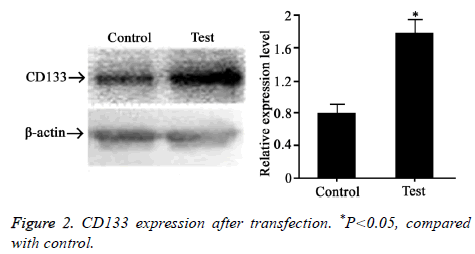 The impact of CD133 expression on cell survival

Different doses of radiation was applied on CD133 overexpressed HT-29 cells. Colony formation assay was used to test cell survival (Figure 3). No statistical difference was observed between CD133 overexpressed HT-29 cells and control when the radiation dose was 0. However, the survival rate of HT-29 transfected with CD133 was obviously higher than the control when the radiation dose larger than 1 Gy (P<0.05). 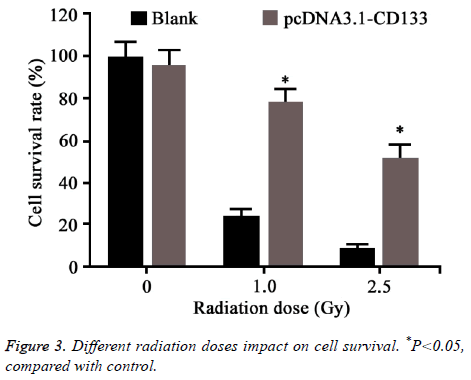 It is generally believed that CSCs cells play an important role in the process of malignant tumor resistance and postoperative recurrence [7]. Many studies confirmed that CD133 positive expression was an important index to distinguish CSCs in malignant tumor cells, including colorectal cancer [10,13,14]. Thus, it was speculated that CD133 positive expression may be correlated to rectal cancer CRT resistance.

To explore the relationship between CD133 expression and rectal cancer cells CRT resistance, we overexpressed CD133 in HT-29 cells and detected cell survival under different radiotherapy doses. The results demonstrated that CD133 overexpression may enhance HT-29 cell survival under radiation. Hongo and Kure also got similar results. Based on the abovementioned research, we speculate that CD133 positive expression may be related to the rectal cancer patients CRT resistance [17,18].

At present, the specific effects of CD133 are still unclear. Researchers have not found the ligand of CD133, and also fail to find the interaction between CD133 molecular and signaling pathways. However, CD133 abnormal expression is associated with autosomal recessive inheritance and retinal degeneration. James pointed out that it could be due to CD133 overexpression can promote BAX expression, thereby reducing cells apoptosis [19]. It was also found that P53 protein level significantly elevated in CD133+ cancer cells after radiotherapy, which can enhance cell DNA damage repair ability and improve resistance to CRT [20,21].

Rectal cancer is a type of digestive tract malignant tumor that seriously harms to patient’s health. Postoperative recurrence and CRT resistance keep in trouble medical personnel in rectal cancer treatment process. Our results found there was an association between CD133 expression in cancer tissue and CRT effect. CD133 positive rate was lower in CRT effective patients, which could be used to predict the curative effect, so as to reduce patient’s burden. At the same time, the relationship between CD133 expression and CRT resistance also implies that we should take CD133 as treatment target for rectal cancer in the future. Some researchers are trying to develop a CD133 monoclonal antibody drug, and couple drug molecule to chemotherapy drugs, in hope to kill the CSCs in malignant tumor cells. It may decline postoperative recurrence and CRT resistance, reduce patient’s pressure, and improve the treatment efficiency.