There is increased cardiovascular disease incidence attributed to ambient air pollution. It is estimated that ischaemic heart disease and stroke account for 80% of ambient air pollution-related early deaths. The most deleterious are the ultrafine particles (UFPs) which have more prominent potential health threat, since they can act as carriers of other strong air pollutant such as polycyclic aromatic hydrocarbons (PAHs). UFPs are small in size, hence can easily penetrate and reach cardiovascular tissues and organs. To understand their mechanisms, studies on UFPs and PAHs induced cardiovascular diseases were reviewed. The studies showed that UFPs and PAHs initiate events in atherogenesis including oxidative stress, expression of cell adhesion molecules on the surface of the endothelium, inflammation, and endothelial dysfunction. Endothelial dysfunction is associated with cardiovascular diseases such as hypertension, coronary artery disease, chronic heart failure, and peripheral vascular disease. The current review provides useful information on deleterious effect of UFP and PAH exposure on cardiovascular system. Thus advancing knowledge on UFP and PAH toxicity underscores the importance of the cardiovascular effects of air pollutants.

Ambient air pollutants comprise of particulate matter (PM), gases, organic compounds, and toxic metals [2,3]. Particulate matter (PM) is a blend of liquid droplets (aerosols) and solid particles like dust, soot, smoke, and dirt. PM is found in smoke, diesel exhaust, and haze that either come specifically from combustion or is a result of response to gases and sunlight or air [4]. In any case, the inhalable particles are of 10 μm in aerodynamic diameter (PM10), fine particles 2.5 μm (PM2.5), and ultra-fine particles <0.1 μm (UFP). PM2.5, most generally utilized as a representative marker of exposure to air pollution, is progressively measured and checked by national air quality monitoring networks [5]. However, experimental evidence suggests that UFP may be more dangerous than PM10 and PM2.5 due to their chemical composition, small size, large surface area/ mass ratio, capability of generating reactive oxygen species (ROS), high retention rate, and deep penetration in the respiratory system [6]. Thus the World Health Organization (WHO) and the Organization for Economic Co-operation and Development (OECD) have called for a critical and comprehensive assessment of UFP safety [7]. Moreover, research substantiations demonstrate that exposure to UFPs adds to the advancement of cardiovascular disease; along these lines, triggering acute cardiac events such as altered heart rate, heart rate variability, changes in microvascular function, and systemic inflammation [8,9]. This is due to their unique physicochemical properties which have unpredicted biological effects [10-12].

Due to widespread sources and persistent UFPs and PAHs in the environment. Human beings are exposed to UFP and PAH mixtures in particulate phases in ambient air. Long-term exposure to high concentrations of the mixture is associated with adverse health problems. Thus, studies on PAHs in particulate matter (PM), such as UFP in ambient air, have become attention greater focus of research in recent years.

Ultra-fine Particles (UFPs) have been found to have an atmospheric concentration ten times higher in the urban air than in rural air and are considered the most detrimental of all PM fractions [21]. This is on the account of UFP size empowers them to infiltrate through the lung to the circulatory system and reach other organs [22]. In addition, UFPs act as carriers of other strong air pollutant such as Polycyclic Aromatic Hydrocarbons (PAHs) [23] because of their adsorption capabilities. UFP are incidentally generated in the environment, often as by-products of fossil fuel combustion, condensation of semi-volatile substances or industrial emissions [24,25]. In addition, the speedy growth of nanotechnology is increasing the environmental exposure to nano-size particles. This exposure may be especially chronic for those employed in research laboratories and in high tech industry where workers handle, manufacture, use and dispose of nanoparticles.

On the other hand, PAHs are ubiquitous environmental pollutants generated primarily during the incomplete combustion of organic materials such as coal, oil, petrol, and wood. Exposure to PAH has been previously link to development of cardiovascular disease (CVD) such as coronary heart disease, peripheral arterial disease, stroke, and myocardial infarction [16-20]. Besides, elevated PAH metabolites in urine has been associated with increased CVD events [18]. Moreover, a previous study reported an increased risk for fatal ischemic heart disease in relation to occupational exposure to benzo(a)pyrene [16]. The major route of PAH exposure include in halation, ingestion, and dermal contact in both occupational and non-occupational setting [26]. Many PAHs are toxic and rapidly distributed in a wide variety of tissues with a marked tendency to localize in body fat [26].

Polycyclic aromatic hydrocarbons (PAHs) are organic compound pollutants, which are ubiquitous in ambient air and exist as gases or joined to the Particulate Matter (PM) [27]. The existing interaction between UFPs and PAH from trafficrelated air pollutants [28] might be the reason for progression of atherosclerosis observed in low level pollution below the existing regulatory standards [29,30].

Upon entering the bloodstream, the UFPs bound with PAH get into direct contact with blood vessels and the heart endothelial cells lining. Endothelial cells are the biological barriers which mediate clearance of nanoparticles, maintain vascular function and homeostasis [31]. Moreover, in vivo and human studies have indicated damage to endothelial cells as an important mechanistic event by which inhalation of particles is associated with cardiovascular diseases [32]. The initial events in atherogenesis include the expression of cell adhesion molecules on the surface of the endothelium, inflammation, and endothelial dysfunction [33]. Both UFPs and PAH have also been shown to individually induce endothelial cell toxicity resulting in endothelial dysfunction [34-36]. Long term exposure to high levels of environmental UFPs have been shown to increase risk of arteriosclerosis, whereas short-term exposure can cause changes in heartrate variability [37]. UFP exposure depresses myocardial contractile response and coronary flow in both spontaneously hypertensive and wild-type rats [38,39].

Tithof et al. (2002) investigate the effects of polycyclic aromatic hydrocarbons contained in cigarette smoke on phospholipase A2 (PLA2) activity and apoptosis of human coronary artery endothelial cells. They found that B(a)P induce apoptosis of endothelial cells by a mechanism that involves activation of phospholipase A2 (PLA2) [40], leading to endothelium dysfunction. Endothelial dysfunction has been recognized as the source of multiple cardiovascular events that causes damage to the vascular wall, forms atherosclerotic plaque and consequently promotes vascular injury [41,42]. Besides, cardiovascular diseases such as hypertension, coronary artery disease, chronic heart failure, and peripheral vascular disease have been associated with endothelial dysfunction [43]. The underlying mechanisms are not understood, but oxidative stress and systemic inflammation have been suggested to play a role in PAH-induced CVD [44,45].

Ultra-fine particles have been shown to have a greater content of redox active compounds, such as prooxidative polycyclic aromatic hydrocarbons (PAHs) that could provide them with a greater prooxidative potential [46]. In addition, their smaller size and greater surface-to-mass ratio may enable them to have greater bioavailability for the PAHs on their large surface area, making them more accessible to the contact sites of cells [46]. PAHs adsorb onto particles play a toxicological role in generating ROS, oxidative stress, and inflammation once inhaled [47]. Our previous study reported unanticipated toxicity induced by the co-exposure of UFPs and PAH, which was beyond the well-known toxicities of the individual compounds [48]. The SiNPs and B[a]P coexposure of induced excessive oxidative stress, subsequently resulting to DNA damage, cell cycle arrest, and apoptosis of endothelial cells [48]. Moreover, enhanced expression of proinflammatory and procoagulant genes have also been previously observed in SiNPs and B[a]P co-exposure [49], which is an indication of inflammation-coagulation cascade involvement in the co-exposure toxicity mechanism. Furthermore, oxidant injury plays an important role in UFPinduced adverse health effects including exacerbation and promotion of atherosclerosis [50]. 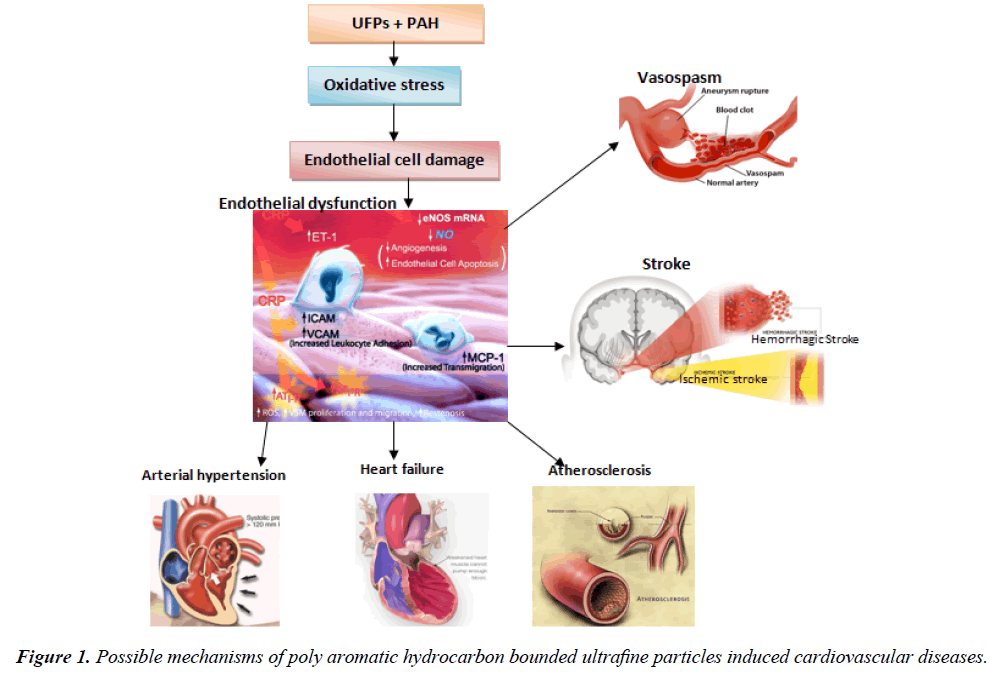