Breast cancer is a result of the uncontrolled cells division. These cells may spread from the breast to other parts of the body through blood vessels. Many symptoms were associated to the breast cancer, such as change in color, skin, and shape. In this work, the breast tumor will detect according to its geometric, texture, and gradient features. Firstly, region of interest (ROI) will detected by using the Hough transform. After the location of breast tumor was determined, these locations will cropping from the original mammogram image to detect the actual tumor, then twenty two features will be computed for the ROIs using predefined equations. These features are used to classify the infected tissues from the normal one. A comparison was made between system results of the breast features and reading of an expert’s radiologist to ensure the feasibility and algorithm efficiency.

Breast cancer is where anomalous cells develop in an uncontrolled manner. It is the most widely recognized reason for death among moderately aged ladies. The World Health Organization's International Agency for Research on Cancer in Lyon, France, has evaluated that in excess of million ladies overall kicked the bucket because of breast cancer every year [1].

Mammography helps in early location and it assumes a critical part in cancer treatment and permits a quicker recuperation for a large portion of the patients [2]. There are two sorts of mammography, film and computerized. Computerized mammography is superior to film mammography since radiation beams can be lessened up to half can even now identify breast cancer, while in film mammography the standard radiation beams can't be diminished [3,4]. Keeping in mind the end goal to enhance the biopsy yield proportion, masses must be named amiable or threatening.

Masses with sporadic in shapes are normally threatening, and those joined with radiolucent shapes are favourable [5,6]. In this work the digital mammogram images that were provided from online mammogram database (MIAS database) will be used [7]. Firstly, for each image the location for each suspicious areas will be decided and secondly a number of significant features-geometric, texture, and gradient featureswill be computed [6,8-10].

There are a lot of features types that describe tumors in image. The function of features is to translate the medical statistics into decisions. Firstly, geometric features describe the geometric properties of the ROI. It is represented as a set of pixels in image [11,12]. Secondly, texture is really very fuzzy concept, these features of attempt to describe grayscale items between adjacent pixels in the image [13]. Finally, gradient is a subsidiary of the image among the neighbourhood respects. The Sobel operator is used to record gradient image as well [14].

The suspicious area (ROI) can be easily detected in a picture if the area contains enough background variation. The steps of the proposed can be summarized as follows:

The images that are used in the algorithm from MIAS database [7], are firstly converted into gray level.

ROI differs significantly in contrast from the background. Changes in contrast can be detected by different operators such as Sobel, Prewitt, Roberts, Canny, etc. In this work, Sobel detector is used, due to its design simplicity.

Subtracting the original image from the image after filling its gaps

After some of pre-processing process such as image dilates, fill interior gaps; the subtraction of the background from the filling images will be preceded. This process is very essential, to enhance the periphery of the ROI to make it easy to fit it in a circle that made in the following stage using Hough transform.

Hough transform is used here to surround the tumor area by a circle that closes to the surface dimension of the tumor [15]. The pseudo code of the algorithm can be summarized in Table 1.

Determine the features for the ROI

Here, the geometric, texture, and gradient features of ROI will be calculated using equations that predefined in [6,12,13]. Equations that needed to detect tumor features were listed in Figure 1. 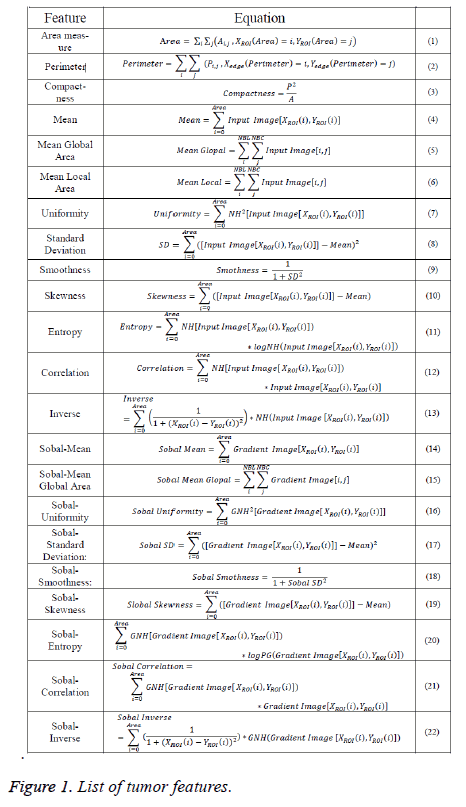 This part introduces the experimental results of the proposed algorithm on the dataset consisting of 322 breast images from MIAS database that covering all cases of masses (malignant and benign) by different shapes, and size. The goal is to test and validate the proposed system presented in this paper in order to select the most suitable system. The total number of malignant samples that used here were 52, while the number for benign was 66 samples; finally normal samples were equal to 204. Table 2 lists the description of all images in the MIAS database and supplies the following significant information [16]. A portion of the tissues are darkened by a splendid area in the focal point of the mammogram. This brilliant locale makes the image be unevenly lit up.

Because the background of the mammogram is dark and the image of tumor masses are lighter than the background of the image, the using of the top-hat transform is required to reduce uneven lighting. This transformation is defined as the difference between the original image and its opening. The opening of the image is the set of front parts of the image that fit a particular structural element. After the location of the tumor area from the entire breast locale the features for these district will be ascertained, as specified before; 22 features will be calculated and will be spared in database which contains 322 row, each row for one image and 22 features extraction that calculated based on equations (1-22). The terminology measurement, i.e. (performance criteria) of the work for system is shown in Table 3. After the location of breast cancer was determined by previous method, these locations will cropping from the original mammogram image to detect the actual tumor as depicted in Figure 2. As a result of breast tumor detection, a 22 features based upon the equations that explained in the methodology section will be calculate that shown in Table 4.

Table 3. Terminology measurement of the algorithm. 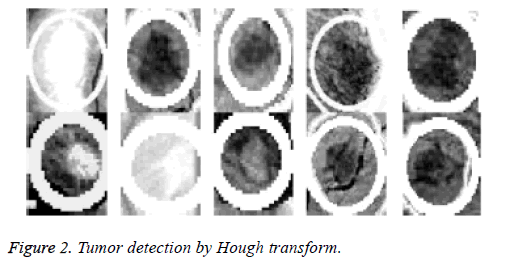 The results of the computed features by using the equations (2-23) appeared in Table 4. Based upon these features, the classification between the normal tissues and the other infected tissues can be determined by aiding of an expert radiologist.

The performance measures of the proposed algorithm with the other reliable classifiers are depicted in Table 5.

Table 5. Performance comparison with the other reliable classifiers in terms of accuracy (Acc.).