Frosted branch angiitis (FBA) is typically a bilateral diffuse retinal periphlebitis which occurs in a number of conditions. Here we report an unusual case of a 20 year old female patient who presented with bilateral blindness with a fundus picture of FBA following four days of fever and headache. A series of investigations were carried to rule out the possible underlying diseases and significant recovery of vision was seen on treatment with intravenous steroids and intravitreal Acyclovir therapy.

Frosted branch angiitis (FBA) was first described by Ito in 1976 in a 6-year-old child [1]. It is a rare entity with approximately 100 cases described in literature till 2016. The diagnosis is made clinically with typical periphlebitis (veins more commonly involved than arteries) in a pattern of frosted branches of a tree and can be supplemented with findings on fundus fluorescein angiography (FFA). Primary frosted branch angiitis has a variable course, predominantly affecting children or young adults. The disease is likely to represent a common immune pathway in response to multiple infective agents and is known to respond well to steroid therapy.

A 20 year old female presented with high grade fever associated with chills and headache of 4 days duration. CSF analysis showed decreased protein level and Polymorphonuclear leukocytosis. She was being treated for acute pyogenic meningitis by a physician in charge. Four days later, she presented with blindness (Visual acuity: Counting Finger close to face) in both eyes for which an ophthalmology opinion was sought.

On ocular examination, anterior segment was unremarkable. On Indirect ophthalmoscopy, Fundus showed bilateral Optic disc edema with macular edema, sheathing of both arteries and Veins and vascular cuffing was noted with Frosted Branch Angiitis picture (Figure 1). FFA showed leakage from the retinal veins and the optic disc (Figure 2). There was no evidence of capillary non-perfusion or neovascularization. Patient was treated with intravenous Methyl prednisolone for 5 days and with intravitreal Acyclovir therapy for 7 days followed by tapering dose of oral steroids and Valacivir thereafter. Visual acuity significantly improved to 6/12 in both eyes in one month period with resolution of vasculitis and minimal optic disc pallor (Figure 3). 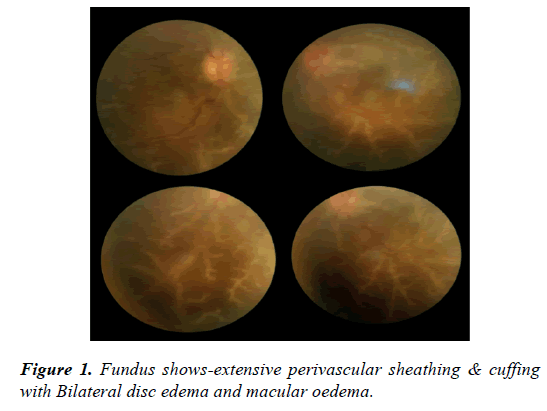 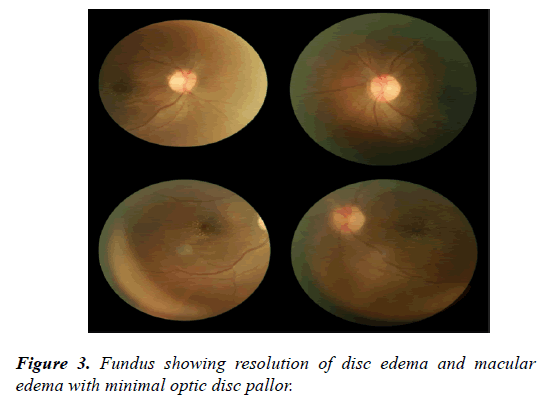 It is not an etiological diagnosis in itself but a clinical picture which may have varying causes. Based on the underlying pathology, Kleiner et al. [2] classified patients into three different subgroups. The first group included patients affected by lymphoma and leukaemia that can present with a frosted branch-like appearance in the fundus. The second group included patients with associated autoimmune or infectious diseases that can have FBA as a clinical sign of the underlying disease. The third group included patients without an identifiable cause and was classified as having primary idiopathic FBA. These patients tend to be of younger age group, with both eyes involved. FFA in these cases does not show any non-perfusion or neovascularization. They respond very well to oral steroids. The vasculitis here is usually nonocclusive. In the recovery phase, micro aneurysms have also been described [3]. Visual field analysis shows constriction or relative central defects that improve after clinical resolution [4-13]. The latter is thought to result from macular oedema. From review of the literature, CMV [14] has been found to be the most common underlying infectious pathology followed by toxoplasmosis. These cases may show focal retinitis in addition to the vasculitis. Behcet's disease is most frequently associated with FBA among autoimmune diseases.

This case report highlights the clinical features of a rare but easily identifiable retinal vasculitis. We emphasize the importance of detailed history taking and clinical examination with tailored investigations in a case of FBA

Prompt recognition and treatment of Frosted branch Angiitis with pulse therapy could be sight saving.

There are no Conflicts of interest.