It is a non-toxic powder composed of fossilized, one-celled organisms called diatoms. It is used to control slugs, millipedes, sow bugs, cockroaches, ants and soft-bodied insects like aphids. It has low mammalian toxicity [1,2]. Use the "natural grade", not the type used as a filtering agent in swimming pools. Prolonged exposure to Diatomaceous Earth will irritate lungs and other tissues of people or pets. Because it also kills honeybees, avoid applying the product to crops in flower. Diatomaceous Earth products include:

It is derived from boron, a naturally occurring mineral. It acts as a stomach poison and causes insects to die from starvation. Boric acid is available in powder, paste, aerosol, tablet, and liquid forms for use against cockroaches, ants, and other insects. It should not be applied around plants in the landscape because, although boron is a necessary plant micro-nutrient, larger than trace amounts are toxic to plants [3,4].

Most Boric acid products are available as ready-to-use products. Boric acid (labels may list this as Orthoboric acid or sodium tetraborate) is sold under a number of brand names, including:

Bifenthrin is a pyrethroid insecticide used to control a range of pests. It has a low aqueous solubility and is volatile. There is a low risk of groundwater contamination based on its chemical properties and it is not persistent in soil. There are some concerns about bioaccumulation and the pesticide shows a high oral toxicity to mammals as well as being an endocrine disrupter and a neurotoxicant [5,6]. It is toxic to birds, most aquatic organisms, honeybees and earthworms. A pyrethroid is acaricide/insecticide use in a wide range of crops to control sucking and biting foliar pests.

Pakistan has several varieties of citrus fruit, in addition to the popularity known as kino all of which may interest importer in Asia and Europe. Kino is rightly called the king of easy peelers and excels the best varieties of the world. Citrus juice contest 44% to 47.5% which is the highest easy peeler varieties. Sugar content is 12 to 13% and each 100 ml of kino contain 20 mg to 25 mg of Vitamin C. Pakistan produce kino 80%. In Pakistan citrus fruit is important fruit crop grown the area of 206,569 hectares with the production of 2.5 million tones.

The pest is a native of Asia but is also found throughout the Americas, Europe, and Oceania. In North America, it is present in both Mexico and the United States (Alabama, Arizona, Arkansas, California, Florida [7,8] Hawaii, Kansas, Louisiana, Maryland, Massachusetts, Missouri, New Mexico, Ohio, South Carolina, Tennessee, Texas, and Virginia) (CABI/EPPO 1999) (Figure 1).

Chemical insecticides can have adverse effects on the environment and human health and can induce insecticide resistance in the target pest species and kill beneficial insects [5]. Chemical insecticides, to control citrus mealy bug and since the second and third instar nymph is covered with white-cottony wax and has a fringe of elongated waxy filaments that extends about the periphery of the body consequently [14], it is quite difficult to control citrus mealy bug [15].

Citrus mealy bug and long tail mealy bug males undergo six life stages and become winged adults [16,17]; Direct damage to plants results in stunting, yellowing of leaves, leaf drop, increased risk of infection by plant pathogens, and occasionally plant death [6,16-21]. Mealy bugs are polyphagous insects that feed within the vascular tissue of plants using their piercing-sucking mouthparts, to withdraw plant fluids [17,18]; Indirect damage is caused by the excretion of honeydew [11,22,23], a clear sticky liquid that is an ideal growing medium for black sooty mold fungi, which can reduce the ability of plants to photosynthesize [18,19]. Also, honeydew is a supplemental food source for ants which may protect mealy bugs from biological control agents or natural enemies such as parasitoids or predators [16,24]. This observation may have led the Chinese to use Diatomaceous Earth (diatomite) for pest control 4000 years ago [2].

Pumpkin and Potatoes are washed with tap water and air-dried. Then Potatoes are placed in boxes and cover with black cotton cloth to encourage sprouting. Boxes were kept in dark place at 27°C and 65-75% RH. When potato sprouts reached to 2 cm 3 cm in length. Then sprouts were shifted into rearing box for the culture of citrus mealy bug. Eggs were taken from the isolated adults; females immediately after deposition and placed on potato sprouts and pumpkin to maintain the colony. Every week, newly sprouted potatoes were added to the stock culture of P. citri to maintain the colony [25,26].

Prepared 15 Petri dishes by cutting the filter paper equal to the size of Petri dishes and placed the filter papers in Petri dishes. Then fine potato sprouts were placed into Petri dishes and finally released ten 3rd instar insects of citrus mealy bug in each Petri dish and were sprayed (Figure 3). Each Petri dish was placed under controlled condition (25°C, RH 60%). The experiment was laid under Randomized Complete Block Design (RCBD) with 5 treatments including control while all the treatments were replicated thrice. Mortality data was recorded after 3 days; 5 days and 7 days of post treatment [5,9,27]. 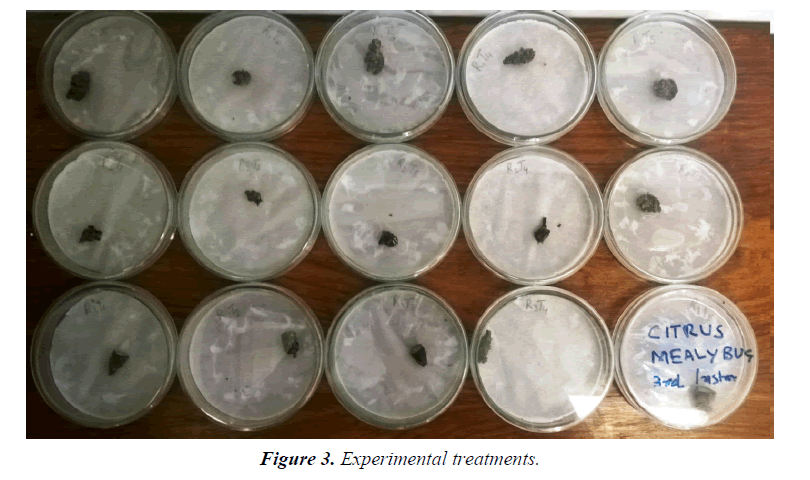 In order to determine toxicity of insecticides at their recommended field doses, Bifenthrin, Boric acid and Diatomaceous Earth against the 3rd instar were sprayed by lady hand sprayer (Figure 4) with the solutions prepared in 1000 ml of distilled water. The check / control were sprayed with distilled water only. 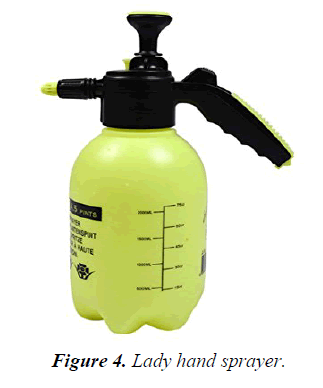 Abbots formula (Flemings and Ratnakaran 1985) was used for percent population change which is as under;

Calculated % mortality was analyzed by [RCBD] variance and means and transformed averages were used at 5% and 1% level. 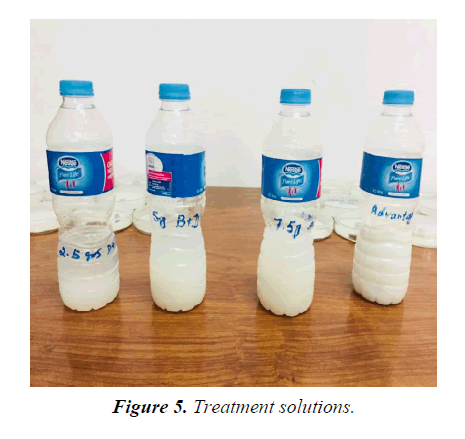 Diatomaceous Earth with Boric acid is the alternative of chemicals/pesticides; which has managed Citrus Mealy Bug (Planococus citri) in the laboratory at 30+30 grams in one liter of water formulation (30 grams of Diatomaceous Earth+Boric acid). The efficacy was slow due to organic properties of both compounds vs. chemical bifenthrin. This study proved statistically as good as chemicals against Citrus Mealy Bug (Planococus citri); in comparison to untreated/control; which is cheaper in price; easy to prepare; environment friendly and can promote organic citrus for premium profits and IPM techniques.