Cavernous hemangioma (CH) is a common infantile benign tumor affecting females more than males with a ratio of 3:1; head and neck being the most common affected sites. Usually CH is self-resolved. However, medical treatment is required based on site, number and size of the lesions. Different therapeutic modalities include medical treatment, such as propranolol and systemic, topical or intralesional steroid therapy, surgical excision and laser therapy.

This case report presents a case of 12-month-old female infant with a large CH measuring 10 cm × 12 cm, affecting the right side of her face including her forehead, orbit, nose, cheek, external ear and mandible. There was no cerebral extension on MRI, and therefore was treated through alternate-day steroid therapy over a duration of 8 months yielding a cosmetically satisfying appearance with no adverse effects.

Cavernous hemangioma (CH), a benign vascular tumor, occurs most often during infancy. In 40% of cases, symptoms are not obvious until the age of one month. CH is characterized by rapid proliferation in the first few weeks of life (average age 3 months), followed by slow spontaneous regression between 6 and 12 months [1,2]. Onset may be sporadic or familial with autosomal dominant inheritance [3]. The size varies at diagnosis from 0.5 cm to 20 cm in diameter. Infantile hemangiomas are usually focal and well circumscribed. Yet, few lesions are segmented. Various types have been described including cavernous, arteriovenous malformation, spider nevus, port wine stain, strawberry hemangioma, and true vascular tumors [4]. CH can affect one or more different sites; the most common site is in the head and neck (60%), followed by trunk (25%), and extremities (15%) [5]. CH can also affect visceral sites like the brain, larynx, liver, pancreas, spleen, gallbladder, adrenal gland, thymus, lymph node, lung, and urinary bladder [6]. CH can lead to complications including vision impairment or airway obstruction; they can also enlarge, bleed, ulcerate, scar, or develop a secondary infection. CH may also lead to high output cardiac failure, organ dysfunction, mobility problems, and disfigurement [7]. Different therapeutic modalities have been used to treat CH that affects organ function or cause disfigurement; these modalities include medical treatments such as beta blockers and glucocorticoids, and surgical modalities such as laser therapy, cryotherapy, or gross removal [8].

This is a case of a 12-month-old female infant with cavernous hemangioma including the right side of her face with involvement of the right eye.

A 12-month-old girl presented with a large right periorbital cavernous hemangioma that was detected initially after birth as redness in the forehead extending towards the mandible and interfering with the eye opening. She is a product of a full-term uncomplicated pregnancy and normal spontaneous vaginal delivery with a birth weight of 2.5 KG. There was no history of placental anomaly or family history of CH; her parents are first degree relatives. At the age of 4 months, she presented to the emergency department with increase in the size of the lesion, surrounding edema and moderate bleeding from the right eye after accidentally scratching her eye, and incomplete eye opening. She was hospitalized and initially started on propranolol during her hospitalization without much regression in size. Therefore, alternate-day oral prednisolone was added with marked improvement in size noted over the following 8 months (Figures 1 and 2). There was no history of any abnormal movement, seizures, weakness, or focal neurological deficit. She responded well to prednisolone through regression in size of the cavernous hemangioma and regaining the ability to completely open her right eye. She was then noticed to exhibit symptoms of right eye amblyopia that improved with left eye patching and regular follow up at the ophthalmology clinic. No side effects from systemic steroid were noticed in the patient and her growth parameters were within normal range for age and sex. On examination at the age of 12 months, her height was 70 cm, her weight 8.5 kg and her head circumference 44 cm (Figures 3-5). She had no dysmorphic features. She had a huge cavernous hemangioma measuring 10 cm × 12 cm on the right side of her face; the affected area included her forehead, right eye, right side of the nose with sparing of ala nasi, her right cheek, right external ear, and right side of the mandible. There was associated redness and edema, but no bleeding, ulceration, or signs of secondary infection. No other mucocutaneous hemangiomas were noted. Her vital signs were within normal range for age and sex, and systemic examination was unremarkable. Ophthalmological examination revealed right eye amblyopia with no retinal or intraocular involvement. Laboratory investigations including platelet count, bleeding time, and coagulation profile were all within normal range, and a conjunctival swab was clear. Magnetic resonance imaging of the brain showed subcutaneous hemangioma affecting right half of the face and right cheek extending to the right frontal parietal area. There was no evidence of intracranial extension, and posterior fossa structures were unremarkable (Figures 3 and 4). Ultrasound of the abdomen and pelvis showed no internal hemangiomas affecting the liver, gallbladder, spleen, or kidneys. Bone densitometry using quantitative ultrasound of the radial bone showed normal density without evidence of osteoporosis. 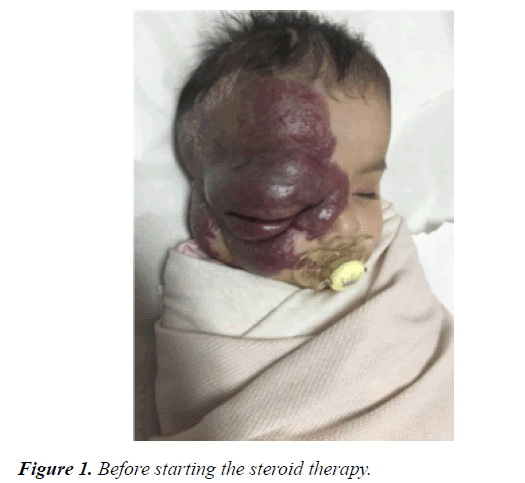 Figure 1. Before starting the steroid therapy. 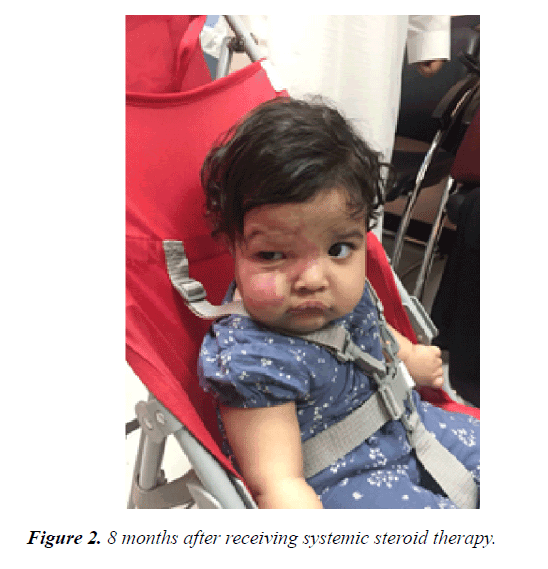 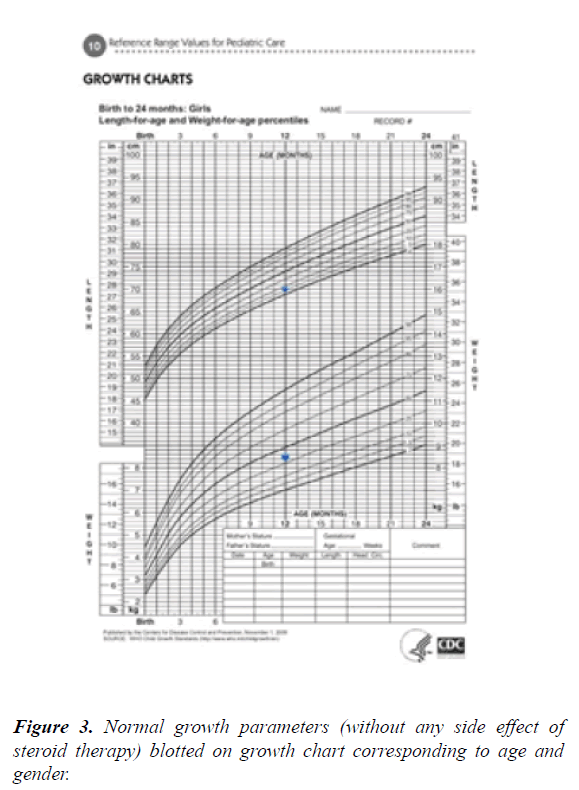 Figure 3. Normal growth parameters (without any side effect of steroid therapy) blotted on growth chart corresponding to age and gender 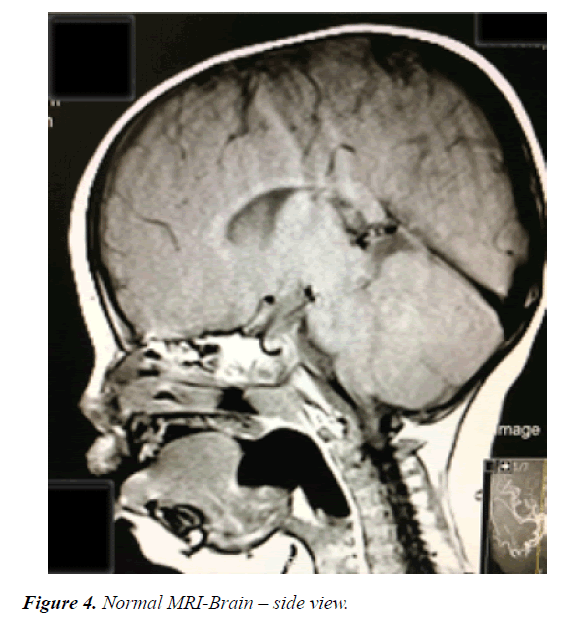 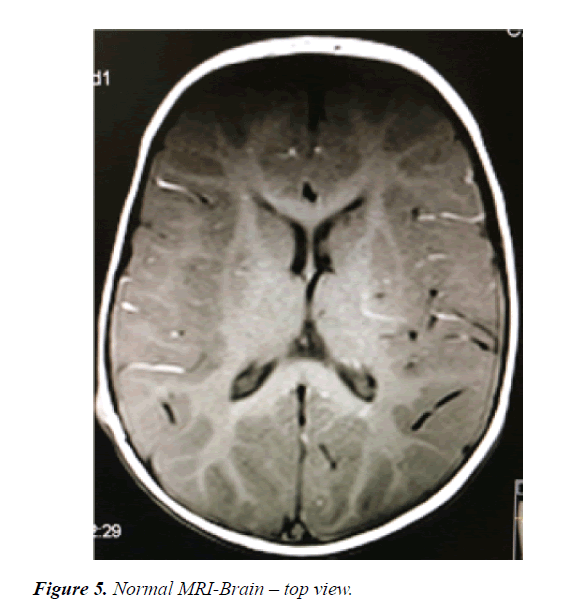 The etiology of CH is likely to be multifactorial and with a more common onset in white non-Hispanic persons (5-10%) [9]. Females are more commonly affected than males with a ratio of 3:1 [10]. Low birth weight is the most significant risk factor; with every 500 g decrease in birth weight the chance of developing CH increases by 40% [11]. Positive family history, Prematurity, placental anomalies, advanced maternal age and multiple gestation are all additional risk factors for a CH. A case of monozygotic twins, both of whom had a right periorbital CH was reported; both twins had the same site and size of the CH and similar age at presentation [3,12]. The incidence of complications was not affected by demographics, prenatal, and perinatal factors [12]. Segmental CH that are tense, rapidly growing, and have early white discoloration, in addition to combined superficial and deep CH are the ones more prone to ulcerate. These ulcers are painful and show scarring on healing [13]. It is common for CH to bleed intermittently, but life-threatening bleeding is rare with only a few reported cases in the literature [14]. Airway obstruction can be associated with cutaneous CH in the face and neck, particularly of the lips and nose, and with visceral CH of the palate, larynx, and pharynx. Symptoms include cough, cyanosis, stridor, sleep apnea, and failure to thrive [15]. Cavernous hemangioma extending to the orbit may cause visual complications; the most common is amblyopia, which might be secondary to astigmatism. Other visual complications include unilateral myopia and obstruction of the visual axis. In this case, the CH was large enough to obstruct the visual axis, which led to amblyopia of the right eye that improved with steroid treatment and left eye patching. Large or multiple disfiguring lesions of the face could lead to psychological problems and the need for cosmetic intervention [16] CH can be associated with syndromes such as Sturge-Weber syndrome, a neurocutaneous disorder (port-wine stain and leptomeninges angiomas); kasabach merritt syndrome (hemangioma, thrombocytopenia, and bleeding), PHACES syndrome (posterior fossa abnormalities, hemangioma, arterial abnormalities, cardiac anomalies, eye abnormalities, and sternal cleft), and SACRAL syndrome ( spinal dysraphism, anogenital anomalies, cutaneous anomalies, and renal and urologic anomalies associated with hemangioma of lumbosacral region); however, there was no such association found in this case. Diagnosis is established initially by clinical presentation, with radiological modalities aiding in the diagnosis through identifying the presence or absence of another lesion and/or extension to internal organs. The best modality is magnetic resonance imaging. Ultrasound is helpful for differentiating CH from other vascular lesions or cysts; in this case, pelvic and abdominal ultrasound used to check for visceral CH as it is faster and did not require any preparation. Glucose transport 1 stain is helpful in evaluating biopsy specimens of CH, which was not done in this case due to the involution with the use of systemic steroid. Stool occult blood testing to check for any bleeding from hemangiomas within the gastrointestinal tract is also required in such cases. Infantile cavernous hemangioma usually does not require any treatment or intervention and regress spontaneously [17]. Treatment is required for lesions that affect organ function, are disfiguring, or compress vital organs or other structures. The use of medical treatment is recommended in complicated lesion; corticosteroid decrease CH size and slow the growth of lesions. The oral form of corticosteroid is preferable over other routs of administration [18]. Propranolol has been used in this patient. CH has two phases; first of which is the proliferative phase, which occurs in the first six months of life and extension to surrounding interstitium involving, displacing, or compressing it. The high expression of proliferating cell nuclear antigen (PCNA), vascular endothelial growth factor (VEGF), and fibroblast growth factor (FGF) induce proliferation of immature endothelial cells and immature pericytes leading to the formation of a hemangioma. The second phase in the involuting phase and it starts with an influx of mast cells; TGF released by mast cell and the high expression of tissue inhibitors of metaloproteinases (TIMPs) will terminate the proliferation of the endothelial cell leading to regression of the hemangioma [2,19]. The mechanism of action of steroids involves suppression of vascular endothelial growth factor, which is highly expressed in the proliferative phase of CH; they also inhibit other factors involved in the mechanism of angiogenesis [20]. Oral steroid therapy is preferred over topical steroids because the topical form has been reported to have mild complications, such as itching, irritation, and hypopigmentation. Intralesional steroid injections have also been associated with complications like atrophied skin, moon face, infection, bleeding, and growth retardation [21]. This reported case followed the approach of administration of systemic steroids every other day to avoid side effects. Surgical modalities like excision or laser surgery were not required in this case because of the marked response to prednisolone leading to decrease in CH size with preservation of vision and a cosmetically acceptable appearance.

Although a cavernous hemangioma is not a common pediatric problem, it is associated with significant complications. Adding steroid therapy to the treatment is of value in reducing the size and progression of hemangiomas, especially if it involves vital external sites (e.g. face, near the eye which might affect the vision, or near the airway with the risk of obstructing it) or internal organs. An alternate-day regimen is in favor in order to decrease or avoid systemic side effects like weight gain, short stature, osteoporosis and others. 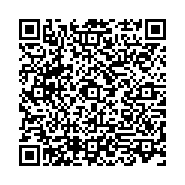