Diabetes is a multifaceted disease occurring due to defective synthesis or action of insulin and as it progresses, complications develops which are associated with oxidative stress and decreased level of antioxidants. Hence this study was carried out to evaluate the levels of MDA and antioxidants like GSH, GPx, Gred, SOD during early phase of the disease( recently diagnosed) in diabetic individuals and compare with normal subjects. A very significant increase (p<0.0001) was observed in the antioxidants levels, MDA ,HbA 1C and fructosamine in the study group as compared to the ones in the control. Increased expression of antioxidant enzymes was found to be positively associated with the free radical levels indicating that the body was trying to respond to the oxidative stress developed due to hyperglycemia during early phase. Hence we conclude that the body tries to take care of the oxidative stress in the initial phase of the disease but this fails over a period of time leading to complications associated with diabetes.

Diabetes Mellitus (DM) is recognized as one of the leading causes of morbidity and mortality in the world. And India will be one of the countries with the largest number of diabetic individuals by year 2025 [1]. DM is initially associated with hyperglycemia but then there is derangement of all other metabolic processes and increased susceptibility to lipid peroxidation [2]. Later on there is development of complications due to increased oxidative stress which is associated with hyperglycemia by various mechanism like non enzymatic glycation of cellular proteins, accumulation of sorbital and activation of protein kinase C isoforms [3]. Normally body is protected from oxidative stress by antioxidants like superoxide dismutase (SOD), catalase, glutathione peroxidase (GPx), glutathione reductase (Gred), reduced glutathione (GSH), uric acid, bilirubin etc. There are many studies done on antioxidant status in diabetic individuals with complication but not on newly diagnosed cases of DM. It is expected that the study will help us to understand how the body tries to take care of the hyperglycemia and is there any association between hyperglycemia and oxidative sTthrees sp.r esent study was designed to evaluate the lipid peroxidation end product such as serum MDA levels and also to study the effect of it on the antioxidants like GSH,SODS, GPx, Gred in the recently diagnosed diabetic subjects and compare them with healthy normal subjects.

The study enrolled 60 subjects. The control group comprising of 30 healthy subjects who were sex and age matched and test group comprised of 30 subjects recently diagnosed as type II DM.

They were diagnosed as diabetic based on the WHO Criteria i.e. symptoms of diabetes plus random blood glucose concentration ≥11.1mmol/l(200mg/dl) or fasting plasma glucose ≥ 7mmol/l( 126 mg/dl) at more than one occasion. The study was conducted in Dhiraj Hospital, Piparia, Vadodara, Gujarat, India. Newly diagnosed patients (not more than one year duration) of DM type II were included in the study. Patients with complications like history of stroke, myocardial infarction or any other cardiovascular disease were excluded. These individuals of group I (test group) were treated only by oral antidibetese drugs (sulfonylurea and metformin). The study protocol was approved by the Ethics Committee of the Institution ( Sumandeep Vidyapeeth) .The participants were recruited in the study only after they willingly signed inform consent form. All ethical norms were followed during the entire course of the study.

In all the participants of the study, both the control and test groups, venous blood sample was collected under aseptic conditions after 12 hrs of fast, in EDTA bulb for HbA 1C which was estimation by resin binding method [4] ,in plain bulb for estimation of serum SOD [5], MDA [6]. Fructosamine [7]. Acid citrate bulb was used for estimation of erythrocyte GSH [8], G red [9], GPx [10].

All results are expressed as mean ±S.D. Students “t” test was used to compare the continuous variables between groups. Pearson’s correlation was employed to calculate the ‘r’ value. Statistical significance was defined as p<- 0.05. The statistical analysis was done using SPSS version 14.0

The study group was divided into two - group I (diabetic individuals) while the group II (control). Table I summarizes the demographic data of participants in both the groups. There was no significant difference between the participants of both the groups with regards to age, sex, educational status, occupation, history of smoking and drug abuse etc. 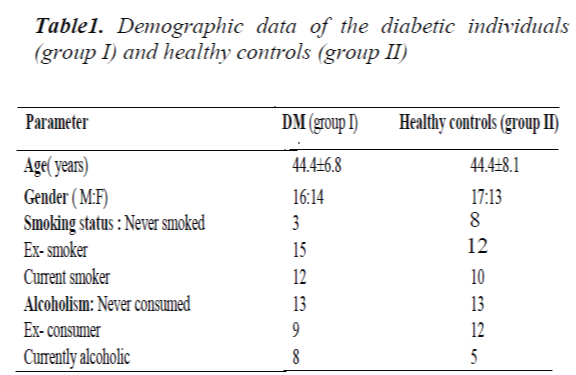 Laboratory findings of all the patients are summarized in table2,3. Serum MDA levels – the marker of lipid peroxidation was found to be significantly elevated (p<0.0001) in the group I than group II (Table -1) and Gred, GPx, SOD was elevated in group I than group II very significantly (p<0.0001) and GSH level was found to be higher (p<0.05) in group I. 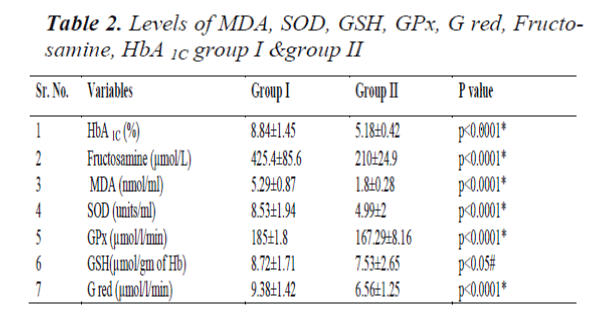 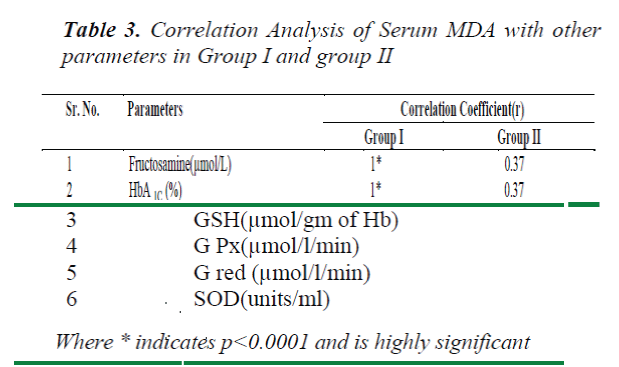 Table 3: Correlation Analysis of Serum MDA with other parameters in Group I and group II

In the present study it was observed that MDA is positively correlated to markers of hyperglycemia in the study group while no such correlation was observed in the control group, which is similar to that of previously reported works [11]. Thus indicating that hyperglycemia exerts its adverse effects by generation of reactive oxygen species which then in turn can oxidize many other important biomolecules inducing “oxidative stress” (OS) and it is this mechanism which is the underling pathophysiology the disease. And the condition further deteriorates when the levels of antioxidants like GSH, GPx, SOD, Gred, vitamin C etc decrease which is usually observed in diabetic individuals [12] but some of the studies done had different observation, they had seen an increased levels [13,14] thus the role of antioxidants in diabetic patients is controversial. In the present study also it was observed that the levels of the antioxidant like GSH, GPx, G red increased in diabetic individuals and it was positively correlated with MDA. In control group increased MDA level is explained by the failure of the antioxidant defense sys tem which has decrease. This may be because the study group was newly diagnosed diabetes individuals and hence the body was trying to maintain the homeostasis and reduce the oxidative stress by increasing the synthesis of these antioxidants .The over expression of these antioxidants might be an adaption response. SOD for instance is an important antidote to the toxic effect of superoxide anion is also increased due to the increasing dismutation of superoxide to hydrogen peroxide which is generally taken care by the glutathione system. But in diabetic patients due to Insulin deficiency or ineffectiveness of the available insulin, there is more of β oxidation of fatty acids hence increased hydrogen peroxide formation. Thus with increase in the lipid peroxide levels the paradoxical increase in the levels of Glutathione system is an interesting finding and could be compensatory mechanism by the body to prevent tissue damage.

We conclude that the higher oxygen free radical production and increased activity of antioxidants during early phase of the disease occur. This may be a phase of compensation which fails to sustain and hence leads to harmful effects of the unchecked oxidants causing complications of diabetes latter on.