Tarantula cubensis Alcoholic Extract (TCAE) is a homeopathic agent used for treating many disorders. This study aimed to define the effects of TCAE on the breast carcinoma cell line (MCF-7). After various concentrations (10, 20, 40, 80 and 160 μl/ml) of TCAE were applied to MCF-7 cells and the human embryonic kidney cell line (HEK293), the cells were incubated for 1, 3, 6, 9, 12, 24 and 48 h, followed by analysis by MTT assays. According to the results of the MTT assays, cells treated with 20 or 40 μl/ml TCAE for 6 h were applied to apoptosis analysis by flow cytometry. Secreted levels of tumor necrosis factor alpha (TNFα), interleukin (IL)-1β, IL-6, IL-10, Interferon-γ (IFNγ), Transforming Growth Factor- β (TGFβ), and Nuclear Factor-kappa B (NF-κB) were measured using ELISAs. TNFα and TGFβ levels increased while IL-6 and IL-10 levels fluctuated in MCF-7 cells. In conclusion, our study suggests that TCAE may change the normal cancer physiology and lead to cell death by activating apoptosis in MCF-7 cells.

Tarantula cubensis Alcoholic Extract (TCAE) is a homeopathic remedy prepared from the spider Tarantula cubensis. The whole spider is processed and diluted with 60% alcohol for potentiation according to the rules of the “Pharmacopeia Germanica” [1]. In veterinary medicine, it is often used as an epithelialization accelerator and demarcation provider because of its oedema-relieving effects in trauma, necrotic disorders, and many infectious diseases [1-3]. TCAE also has an anti-inflammatory effect [1]. Administration of TCAE leads to regression of mammary tumors, and postoperative use of TCAE prevents the reoccurrence of tumors in dogs [4]. In addition, TCAE is effective for the treatment of oral ulcers and papillomas [5,6].

Breast cancer is frequently observed among women and is the fourth most common cause of cancer deaths [7]. One of the etiologic factors of breast cancers is chronic inflammation [8]. Cytokines play crucial roles in inflammation and are produced by tumor cells [9], which are associated with malignancy, the tumor stage, and survival [10]. They are the most significant players in tumor initiation, promotion, angiogenesis, and metastasis [10].

Nuclear factor-kappa B (NF-κB) is a major survival factor that regulates cellular processes such as cell adhesion, immune responses, apoptosis, and proliferation. It has a regulatory role in the balance of apoptosis-proliferation in tumor cells. Moreover, the expression of inflammatory cytokines is induced by NF-κB, and in turn, these cytokines induce activation of NF-κB. Inhibition of NF-κB can improve the efficacy of cancer therapies [11,12]. Studies have shown that NF-κB plays a role in the transition from chronic inflammation to cancer [13].

Tumor Necrosis Factor-α (TNFα) is a multifunctional proinflammatory cytokine that plays important roles in the proliferation, differentiation, survival, and death of cells [14]. It is an angiogenic stimulator that promotes tumor cell migration and invasion [15,16]. Local administration of a high dose of TNFα selectively devastates blood vessels in tumors, thus showing potent anticancer effects. However, upon chronic production, TNFα acts as an endogenous tumor-promoting agent that enhances tumor growth and spread [17]. Interleukin (IL)-1 promotes tumor proliferation, invasiveness, angiogenesis, and metastasis. Because IL-1 receptor antagonist (IL-1Ra) inhibits IL-1 functions, it decreases tumor invasiveness and can be used in cancer therapy [18,19]. IL-6 is a prognostic factor in breast carcinomas and plays an important role in the development, invasion, proliferation, apoptosis, and angiogenesis of tumors. Moreover, IL-6 is a significant contributor to tumor cell survival and drug resistance. Conversely, expression of IL-6 is not induced by breast cancer cells sensitive to drugs treatments, while its expression is produced by breast cancer cells resistant to drugs treatments [20]. IL-10 has an antitumor effect in cancer and displays a tumor regression activity [21].

Transforming Growth Factor-β (TGFβ) is a major regulator in many cellular processes such as proliferation, differentiation, migration, and apoptosis. TGFβ has dual functions in tumor progression [22]. TGFβ as a tumor suppressor has antiproliferative effects in the early stages of tumorigenesis, but tumor cells become resistant to this effect in later stages [22,23]. Blocking TGFβ improves the intratumoral penetration of chemotherapeutic drugs and decreases angiogenic gene expression [24].

Interferon-γ (IFNγ) is a potent immunomodulatory, antiviral, and anti-proliferative cytokine. In addition, it inhibits tumor angiogenesis and shows an anticancer activity. IFNγ increases cellular susceptibility to apoptosis in tumor cells [25].

The homeostasis of cell proliferation and death is regulated by apoptosis in multicellular organisms. Therefore, treatments that affect the apoptotic threshold can change the natural progression of certain diseases such as cancer [26]. Considering these facts and the effects of TCAE on cancer, papilloma, and ulcers in clinical trials [4-6], it has been hypothesized that cancer physiology may be affected by TCAE.

The aim of the present study was to determine the effects of TCAE on cell proliferation, and apoptosis, NF-κB expression, and secreted cytokine levels in the MCF-7 cell line, because NF-κB, TNFα, IL-1β, IL-6, IL-10, TGFβ, and IFNγ have important roles in cancer.

Because TCAE-induced cytotoxicity induces different cell death pathways, such as apoptosis and necrosis, we applied Annexin V staining and flow cytometry. Annexin V distinguishes apoptotic cell death. About 1 × 106 cells were seeded into a flask with 3 ml medium containing 10% fetal bovine serum and 1% penicillin/streptomycin. After the cells were treated with optimal TCAE concentrations (20 and 40 μl/ml) and times (6 h) determined by the MTT assay, 5 μL Annevin V-FITC (eBioscience ABD #BMS500FI/20) was added to each well. Cells were collected by trypsinization. The cells were incubated for 10 min at room temperature, washed with Binding Buffer (1X), and then stained with 10 ml propidium iodide (eBioscience ABD, #BMS500FI/20) (20 μg/ ml). Analysis was performed with a cell sorter (FACSAria III, BD Biosciences).

Supernatants were obtained from MCF-7 cell treated with or without TCAE for 2, 4, 6, 8, 10 and 24 h. Secreted levels of NF-κB, TNFα, IL-1β, IL-6, IL-10, TGFβ, and INFγ were determined by ELISAs (eBioscience, San Diego, CA, USA) as described by the manufacturer’s instructions. Plates were read using the ELISA reader.

To determine the optimal treatment time and TCAE concentration for further analyses, MTT assays of MCF-7 and HEK293 cell lines were performed using various TCAE concentrations (0, 10, 20, 40, 80, and 160 μl/ml) for different times (1, 3, 6, 9, 12, 24, and 48 h) (Figure 1). TCAE showed an inhibitory effect on the proliferation of MCF-7 cells in concentration- and time-dependent manners.

Cell proliferation was significantly decreased by 10, 20, 40, 80 and 160 μl/ml TCAE compared with MCF-7+TCAE and MCF-7 groups at 6 h (Figure 1). Compared with HEK293 cells under the same conditions, cell proliferation was decreased in a dose-dependent manner following partial increases by treatment with 10, 20, 40, 80 and 160 μl/ml TCAE (Figure 1). MTT assay was repeated at least 5 times in groups. 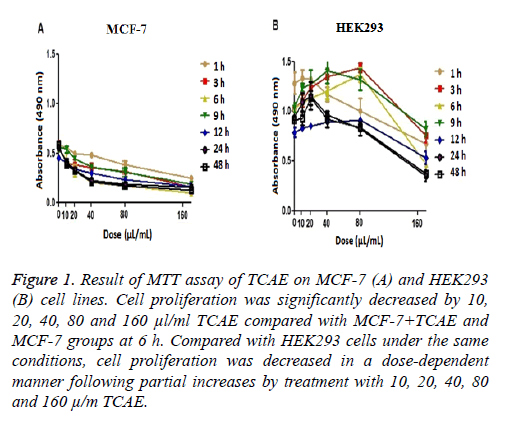 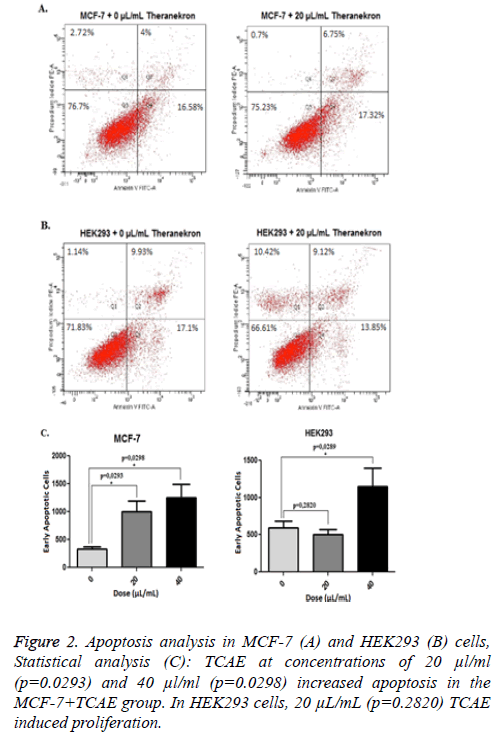 In veterinary medicine, TCAE is a homeopathic agent that is often used as an anti-inflammatory drug, demarcation provider, epithelialization accelerator, and oedema reliever in traumatic and necrotic disorders as well as many infectious diseases [1-3]. In addition, TCAE can also be employed in treatment of clinical sign of foot and mouth disease and endometriosis [27,28]. However, TCAE can also be applied to the therapy of some cancer types [29]. Breast cancer is one of the most frequent cancers among 40-55-year-old women. Numerous risk factors, such as age, ionizing radiation, genetic makeup, and reproductive factors, cause breast cancer [30].

In this study, the apoptotic effect of TCAE was determined in the MCF-7 cell line (Figure 2). TCAE causes apoptosis in a mammary tumor model in dogs [28]. Moreover, recent data by Dizgah et al. reported that Theranekron lead to apoptotic death through activating caspase-3 in cancer cell lines [31]. Because there is limited data associated with the apoptotic effect of TCAE, we evaluated the effect of TCAE on certain cytokines. Antiapoptotic effects can be assessed via cytokines that play important roles in the physiology of cancer. In a coordinated manner, various cytokines, such as IFN, IL-6, IL-10 and TNF, play important roles in breast carcinogenesis [21].

The NF-κB level did not statistically differ between MCF-7 and MCF-7+TCAE groups (P>0.05, Table 1). However, the AUC value of NF-κB was decreased by TCAE in the MCF-7+TCAE group compared with the MCF-7 group (-7.02%). NF-κB is a transcription factor that mediates the synthesis of many molecules including inflammatory agents [13]. It plays dual roles as a tumor promoter or tumor growth inhibitor [12]. However, inhibition of NF-κB has a significant therapeutic effect against breast tumor progression [32]. The antiapoptotic activity is mediated by activation of TNF, while the activity of NF-κB is inhibited by IL-10 [9,13]. Because NF- κB is an intracellular substance and shows intracellular activity in the little amounts, it does not seem to excess the levels which make significant differences in the culture supernatant. Therefore, its level may not change by treatment with TCAE.

In the present study, the TNFα level was highest at 24 h in the MCF-7 group (P<0.05), but did not change significantly in the MCF-7+TCAE group (P>0.05) (Table 1). In addition, the AUC value of TNFα was decreased in the MCF-7+TCAE group compared with the MCF-7 group (-87.33%). TNFα is highly expressed in breast cancer [15], and has an important role in the pathogenesis of cancer [33]. It has been reported that TNFα secreted by cancer cells extends the tumor cell life through induction of NF-κB-dependent antiapoptotic molecules and acts as tumor stimulants [9]. Because the serum TNFα level correlates with the tumor stage, this cytokine reflects the severity of staging for invasive breast cancer. Serum TNFα levels at stage I and II were higher than those in controls but not statistically significant. At stages III and IV, serum TNFα levels were significantly higher than those in the control group [34]. Anti-TNFα treatment is used in several types of cancer [11]. In addition, TNFα promotes chemotherapeutic resistance in cancer [35]. The augmentation of the TNFα level at 24 h may be caused by the normal cancer physiology in MCF-7 cells for migration and invasion.

In this study, the TGFβ level was the highest at 24 h in the MCF-7 group (P<0.05), but it did not change significantly in the MCF-7+TCAE group (P>0.05) (Table 1). In addition, the AUC value of TGFβ decreased in the MCF-7+TCAE group compared with the MCF-7 group (-5.47%). TGFβ has immunosuppressive effects [13] and can play a role in metastasis [41]. It also increases tumor vascularity [42]. TGFβ suppresses the proliferation of cancer cells at early stages. However, TGFβ enhances proliferation of cancer cells, tumor progression, and invasiveness at later stages [22,23]. TGFβ participates in resistance to DNA-damaging chemotherapeutic agents in breast cancer cells [43]. Considering the requirement for immune system suppression in the development of cancer, it is assumed that TGFβ has been secreted by the tumor cells. An increased TGFβ level could arise from the effect of increasing levels of TNFα at the same time.

In conclusion, the anticancer effect of TCAE may be exerted by disturbing cancer physiology or induction of apoptosis. TCAE can be used in the treatment of cancer. However, molecular studies should be performed to determine the anticancer mechanism of TCAE.