Vaginal malignant melanoma is a rare and aggressive neoplasm of the genital tract. It is associated with early dissemination and metastasis. It presents a diagnostic dilemma as it is often confused with squamous cell carcinoma of the vagina and/or cervix, hence, resulting in late diagnosis and poor prognosis. We present a case of malignant melanoma of vagina which was extensively metastatic at diagnosis. It was initially diagnosed after a frontal craniotomy done for a space-occupying lesion in the brain. Subsequently, multiple nodes were detected in axillary and inguinal regions. She was treated with palliative whole brain radiotherapy. Then, she received 6 cycles of adjuvant chemotherapy, paclitaxel and carboplatin. Her disease progression is stable and her KPS has improved with the treatment. Prompt detection of metastasis followed by adjuvant chemotherapy, radiotherapy and immunotherapy can control disease progression in metastatic disease.

Malignant melanoma is a neoplasm of skin and mucous membranes. It arises from melanocytes, which are derived from neuro-ectoderm. It constitutes around 1% of all cancer cases [1]. Lack of melanocytes in the genital mucosa makes it a rare entity in vagina, vulva and cervix; although it is much rarer in cervix as compared to vagina and vulva [2]. Generally, it arises from aberrant melanocytes present in the vaginal mucosa [3]. It carries a very poor prognosis and overall survival owing to its aggressive nature and can spread rapidly. We present a case of widely metastatic malignant melanoma of vagina in a postmenopausal woman.

A 55-year-old female had complaints of bleeding and discharge per vaginum for 5 months with slowly increasing frequency over time. Subsequently, there were occasional episodes of throbbing headache and altered sensorium. Then, she had one episode of generalized tonic clonic seizure following which she presented in surgical oncology clinic. On evaluation a contrast enhanced computed tomography (CECT) brain revealed a thick walled globular space occupying lesion in right frontal region with hypodense cystic center and solid component anteriorly of size 52 × 47 mm with surrounding vasogenic edema. The mass was compressing the lateral and 3rd ventricle which were displaced towards the left side (Figure 1). 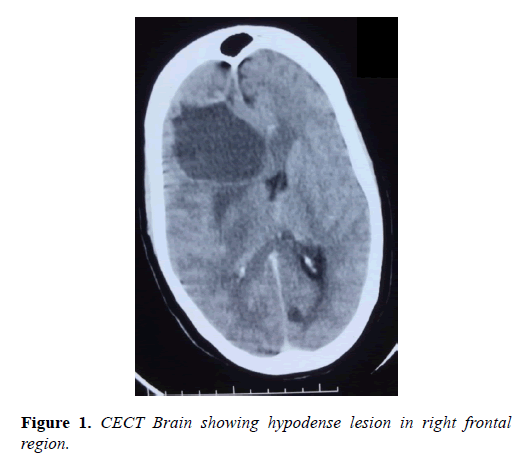 The ultrasound abdomen was normal. She was referred to neurosurgery. She underwent a right frontal craniotomy with gross total excision. The histopathology revealed metastatic malignant melanoma. The patient was referred to us for further management. Haematological investigations, chest x-ray and urine examinations were normal. A thorough clinical evaluation was done. The bimanual abdominal palpation and a combined per speculum and per vaginum examination revealed a 4 × 5 cm polypoidal blackish growth with smooth surface (Figure 2) associated with black discharge in the anterior vaginal wall extending up to lower one-third of vagina with thickening in right medial third parametrium. 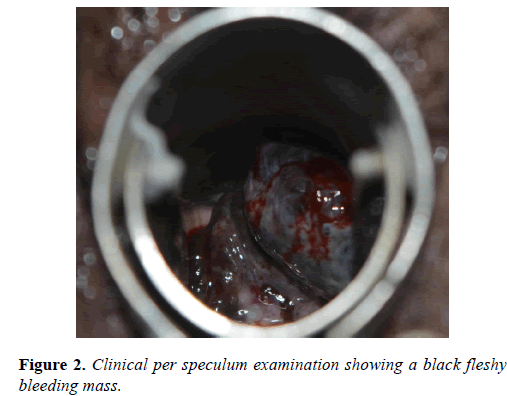 Biopsy confirmed high grade malignant melanoma. A 2 × 2 cm left axillary and bilateral iliac lymph nodes were also found in the examination. CECT abdomen and pelvis confirmed the findings and also revealed bilateral pelvic lymph nodes along with a small nodule in the right lobe of liver (Figures 3A and 3B). 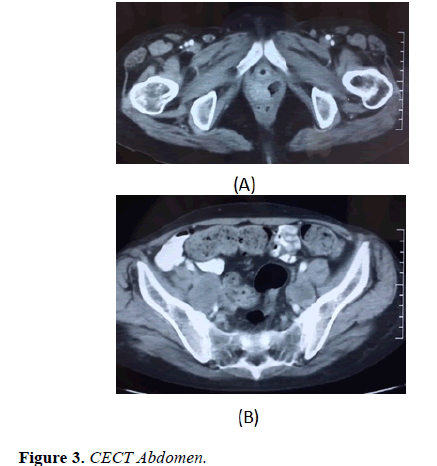 Cystoscopy confirmed no bladder growth or invasion. She received whole brain radiotherapy 3000 cGy in 10 fractions. Subsequently, she was started on chemotherapy and has completed 6 cycles of paclitaxel and carboplatin combination therapy. She has stable disease and good KPS post chemotherapy.

Genital malignant melanomas are a rare form of malignant melanomas. They usually present in the 6th and 7th decade of life. Primary malignant melanoma of vagina is rarer as compared to non-genital melanomas. Vagina and vulva are the most common sites of genital malignant melanoma, accounting for around 2-3% of all melanomas in females [4,5]. The molecular biology of these melanomas also differs from cutaneous melanomas, with BRAF being rarely seen (seen in almost 70% cases of cutaneous melanomas) [6]. There is also a possible implication of hormonal influence and HPV in melanomas [7,8]. Whenever the pathological appearance is conspicuous, immunohistochemistry (IHC) helps in confirming the diagnosis. Melanomas stain positive for S-100, HMB-45 and Melan-A [9]. Also, the surface area the genital sites constitute is much less as compared to the cutaneous sites, so, they have a higher preponderance of having melanomas compared to cutaneous sites; although the actual incidence is much less [4]. Surgery followed by adjuvant radiotherapy, chemotherapy and immunotherapy is mandated in most of the cases [10]. When presenting late, palliative treatment for the symptoms present followed by chemotherapy and immunotherapy is done.

Vaginal malignant melanomas carry very prognosis. They are generally diagnosed late as compared to vulvar melanomas due to their location and late presentation. So, they tend to be metastatic more often. Combination of complete surgical resection, radiotherapy, chemotherapy and immunotherapy is the best treatment. Palliation, whenever indicated, in metastatic disease can alleviate the symptoms.

The authors disclose no source of funding and no conflict of interest. 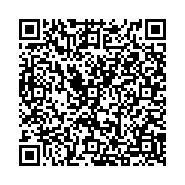