Adult-onset Still?s Disease (AOSD) is a rare systemic auto inflammatory disorder characterized by a triad of spiking fever, rash, and arthralgia that may be associated with multiple systemic manifestations.Diagnosis is clinical, which can be challenging. While definitive diagnostic test is lacking, ferritin and glycosylated ferritin are useful adjuncts to aid in the diagnosis of AOSD. It is important to include AOSD in the differential diagnosis of prolonged fever and sore throat especially if accompanied by other systemic manifestations.Mainstay treatment of AOSD is often with glucocorticoids. Other agents that can also be used include methotrexate, and biologic therapy, such as tumor necrosis factor-? (TNF-?) blockers and interleukin-1 (IL-1) inhibitors. We hereby report a case of a thirty-six years old man who presented with a prolonged course of fever, and recurrent pharyngitis diagnosed as Adult-onset Still?s Disease (AOSD).

AOSD is a rare systemic auto-inflammatory disorder with annual incidence of 0.16 cases per 100,000 people, with an equal distribution between the sexes.

Auto-inflammatory refers to an emerging family of clinical disorders characterized by episodes of unprovoked inflammation without high-titer autoantibodies. It is characterized by highspiking fevers, rash, arthralgia or arthritis, and possible multi system involvement.

Though juvenile idiopathic arthritis was described first by the British pediatrician, George Frederick Still; Bywater’s described in 1971, in 14 young adults, a similar clinical feature to that of the systemic form of the pediatric still’s disease [1].

36-years-old man was referred to our service with spiking fever (39.5°C), arthralgia of elbows, wrists, and knees bilaterally, and sore throat. For the proceeding eight months he experienced recurrent similar attacks with high grade fever, arthralgia, and occasional maculopapular skin rash over the trunk, and face, and extremities, weight loss of twenty-five kilograms, dysphagia, and odynophagia. 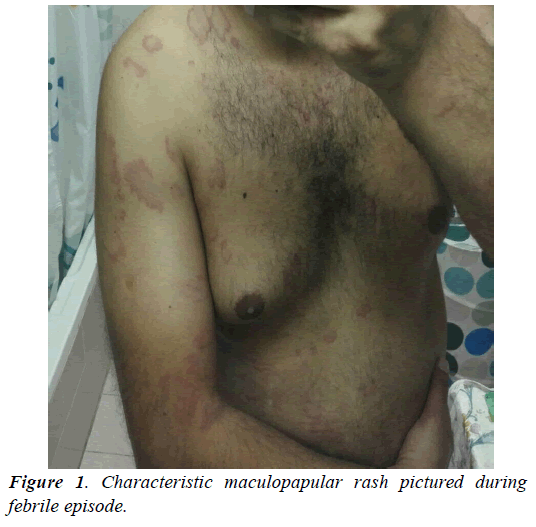 Diagnosis of AOSD was made on the basis of Yamaguchi’s, Fautrell’s, and Cush’s criteria and the patient was started on prednisolone 60 mg a day. Glycosylated ferritin was requested (Figure 2, Tables 1-3). 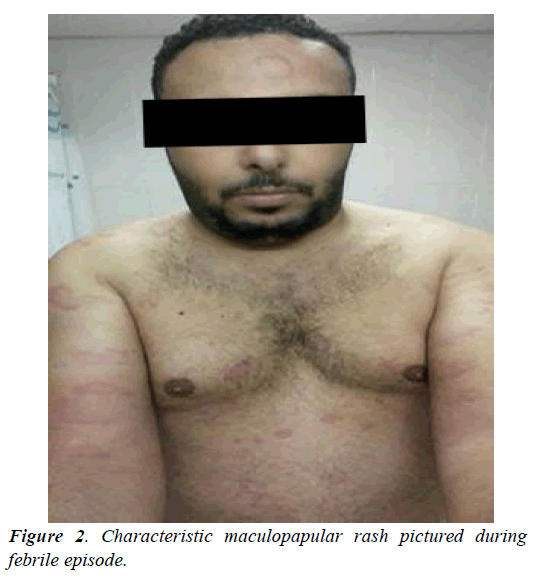 Table 1. Yamaguchi's criteria. Diagnosis based on presence of ≥ 5 criteria, including ≥ 2 major criteria.

In three days, marked improvement was noted both in symptoms and in acute phase reactants levels. Ferritin was 358.7 ng/mL. After 4 weeks, the patient was totally symptom free, with (C-reactive Protein) CRP 11.9 mg/L, ferritin 87.5 ng/mL. Glycosylated ferritin fraction was 36% [2].

Increasing blood pressure and impaired fasting glycaemia were noted. Tapering off steroids was started and the patient continues to be symptom free after stopping steroids. Twelve weeks after initial treatment he had normal white count, ESR, CRP and ferritin. He kept asymptomatic course with normal laboratory values for one year after the initial encounter.

For the following six years, he had arthralgia, with one attack of left shoulder arthritis, with macular rash but no other systemic manifestations. Symptoms responded to short courses of NSAID.

Eighteen months ago, he had fever, macular rash, generalized arthralgia, and prednisolone 40 mg daily and methotrexate 20 mg a week were prescribed before presenting to our facility again.

When he presented, he was symptom-free, with normal white count, CRP, ESR.

Steroid induced adverse reactions were managed by tapering off steroids, yet this was associated with recurrence of arthralgia when decreasing prednisolone to 10 mg a day. The patient was maintained on 20 mg a day. Infliximab infusion was started after having normal chest X-ray and negative viral hepatitis serology. We started Infliximab at 0.3 mg per Kg of body weight then increased to 0.5 mg per Kg of body weight after three months because of sub optimal clinical response. It was well tolerated. After three more months, as the patient was asymptomatic, Methotrexate and prednisolone were gradually withdrawn in the following six months.

Three months after complete discontinuation of glucocorticoid and methotrexate treatment, the patient was still asymptomatic. On examination, he had a blood pressure of 130/88 mmHg, and no evidence of skin rash or active synovitis. His last investigation results revealed ESR of 25 after 1 hour CRP of 10.0 mg/L, Ferritin of 182 ng/dL, Glycated hemoglobin of 5.9% on no pharmacologic treatment for diabetes, normal hemogram, and normal liver function test results [4].

Infliximab maintenance at 0.5 mg per Kg of body weight will be continued with no add-on therapy as long as the remission is well maintained.

The clinical course of AOSD can be divided into three main patterns:

1. Monocyclic with predominance of systemic manifestations, a course that lasts weeks to months and completely resolves in less than a year in most cases.

2. Polycyclic systemic with multiple systemic disease flares that may or may not be associated with arthritis. Flares tend to be less severe and of shorter duration than the first disease episode and;

3. Chronic articular patterns that may overlap with the systemic cyclic pattern [5].

Recent data have suggested that these three patterns may be grouped into only two: a systemic form that includes the monocyclic and the polycyclic patterns; our patient is an example, and another chronic articular form. In fact, it is probable that the immunological imbalance would be different between the two forms, which would explain the difference in effectiveness of specific biologic agents. The presence of severe systemic manifestations, per se, does not contribute to poor functional status.

Etiology and pathophysiology of AOSD is not clearly defined though multiple genetic, immuno-pathogenic and infectious triggers were implicated.

Fever is usually quotidian, often higher than 39.5, with dramatic swings. The classic AOSD skin rash is evanescent, maculopapular, salmon-colored that is usually non-pruritic and tends to occur during the febrile periods. It predominantly affects the trunk and extremities but may affect other sites. Arthralgia and arthritis are usually oligoarticular and mild and transient initially. The most commonly involved joints are the knees, wrists, ankles, and elbows. Fusion of the wrist joints is a characteristic of AOSD, although it occurs in only a minority of patients.

Laboratory findings are heralded-as other inflammatory disorders- with elevation of Erythrocyte Sedimentation Rate (ESR), and C-reactive Protein (CRP) as well as leukocytosis with granulocyte predominance, normocytic anemia, and reactive thrombocytosis. Aspartate and Alanine aminotransferases are often elevated. Serum ferritin is markedly elevated in 30% of AOSD patients. It correlates with disease activity, hence being used as a serologic marker to monitor response to therapy. The glycosylated fraction of ferritin tends to be lower than other rheumatologic diseases. Rheumatoid factor and antinuclear antibodies are absent, although their presence does not exclude the diagnosis.

AOSD diagnosis is largely a diagnosis of exclusion. While the presence of characteristic clinical and laboratory findings may suggest AOSD, it is needed to rule out other conditions that mimic the disease [6].

Different sets of criteria were proposed for the diagnosis of AOSD; all utilize fever, skin rash, and leukocytosis as major diagnostic indicators. The most widely used and reported to be the most sensitive are the Yamaguchi criteria published in 1992 and credited with a sensitivity of 96% but, it has two limitations: first is necessitating excluding diseases which may manifest like AOSD without precise definition of it, and second is not incorporating ferritin and its glycosylated fraction (Table 1).

Treatment is based on small case series and case reports with Non-steroidal Anti-inflammatory Drugs (NSAIDs) as a supportive measure and in the prediagnosis phase. The mainstay initial treatment and treatment for systemic flares is with glucocorticoid 0.5-1 mg/Kg/day with tapering off after normalization of all clinical and laboratory markers of the disease, usually after 4-6 weeks. Disease Modifying Antirheumatic Drugs (DMARDs) can be used for steroid resistance or dependence. Early addition of steroid-sparing treatment may be warranted in patients with risk factors for steroid dependency (young age at onset, splenomegaly, low glycosylated ferritin, elevated erythrocyte sedimentation rate). The best results achieved were with methotrexate 7.5-20 mg/week though other DMARDs may be used.

For AOSD during pregnancy and for life threatening complications, higher doses of glucocorticoids and IV Immunoglobulin (IVIG) may be needed [7].

Adult-onset Still’s Disease (AOSD) is a rare systemic auto inflammatory disorder that may present with symptoms that may mimic other rheumatologic, infectious, or neoplastic diseases. Including it in the differential diagnosis of prolonged Fever of Unknown Origin (FUO) is warranted. When there is no clear diagnosis or no adequate response to treatment for conditions presenting similarly, AOSD should be suspected, and serum ferritin and glycosylated ferritin assessed [8]. 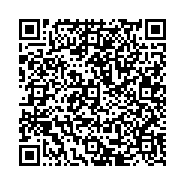