BRAF V600E mutation analysis has been an important companion diagnostic assay to evaluate prognosis of malignant melanoma and to guide target therapy with BRAF inhibitor. The aim of this study was to assess the sensitivity and specificity of Immunohistochemistry (IHC) using VE1 mutation specific antibody on screening for BRAF V600E mutation patients with cutaneous malignant melanoma. We detected BRAF V600E mutation on a total of 90 formalin-fixed paraffin-embedded melanoma tissue samples by ARMS-PCR and immunohistochemistry simultaneously. The results obtained from ARMS were set as a diagnostic gold standard; IHC staining with BRAF V600E mutation-specific antibody displayed 100% sensitivity and 96.8% specificity. Further statistical analysis showed that results from the two methods were consistent (kappa=0.948 p<0.001), Positive Predictive Value (PPV) and Negative Predictive Value (NPV) were 93.1%and 100%. Therefore, as a simple, fast and low cost method, IHC can be used as a routine screening method for BRAF V600E mutation analysis in cutaneous malignant melanoma.

Cutaneous Malignant Melanoma (CMM) is a type of highly aggressive skin tumor originated from uncontrolled proliferation of melanocytes. It accounts for 80% of deaths arising from skin cancer and its incidence rate is on the rise over the past decades [1,2]. V-Raf murine sarcoma viral oncogene homolog B (BRAF) belongs to the Raf family of serine/threonine-specific protein kinases, which activate the RAF-MEK-ERK (MAPK) pathway and play crucial role in the process of cell growth, differentiation, and survival [3,4]. BRAF somatic mutations are the most prevalent mutation in human malignant melanoma, it was reported that BRAF gene was mutated in nearly 40-60% melanoma patients. BRAF V600E mutation, which involved in an exon 15 missense mutation (T1796A), that substitute glutamic acid (E) for Valine (V) at amino acid 600 (BRAF V600E), account for 70% to 90% of all BRAF mutations in melanoma, followed by mutations V600K (10%-30%) and V600D/R (3%) [5,6]. Recently, the role of BRAF (V600E) mutation in predicting clinical outcome has been extensively verification. Melanoma patients with BRAF V600E mutation have shown a significantly worse overall survival than those patients without BRAF V600E mutation [7,8]. Therefore, the targeted therapy against on BRAF has attracted more attentions recently [9]. Since BRAF inhibitors are only effective in patients with BARF mutation, BRAF mutation analysis has been important companion diagnostic test to guide the treatment of melanoma, it is necessary for doctors to find out the mutation status of BRAF gene prior to treatment [10,11]. Currently, methods for BRAF V600E mutation detection are mainly DNA-based techniques including Sanger sequencing, real-time PCR and Amplification Refractory Mutation System (ARMS)-PCR [12-14]. Among these methods, ARMS-PCR is the most widely used method due to its high sensitivity and specificity. However, this method also has its limitation. it involve in specialized equipment and laboratory techniques, the whole detection process require tight quality control program, long turnaround time and high detection costs, while most hospitals cannot meet this demand and have to send samples to other eligible laboratories to complete this test [15,16]. Furthermore, the final detection results are easily affected by insufficient tissue fixation or low tumor cell content [17,18]. As the purified BRAF V600E-specific antibody (clone: VE1) was commercially available in 2011, several published researches have reported that IHC was a sensitive and specific screening methods for BRAF V600E mutation [19,20]. Compared to the ARMS-PCR, immunohistochemistry is a simple, fast and practicable assay in common diagnostic pathology laboratory [21,22]. In this study, we detected BRAF V600E mutation using immunohistochemistry and ARMS-PCR in a retrospective diagnostic setting. The data was collected to analyse the consistency of the two methods and to evaluate the role of immunohistochemistry in screening BRAF V600E mutation.

A total of 90 cases of cutaneous malignant melanoma archival Formalin-Fixed Paraffin Embedded (FFPE) tissue blocks were from the first affiliated hospital of Nanjing medical university, China, between 2012 and 2015. All tissues were fixed in 10% neutral buffer formalin after resection and processed by standard tissue dehydration program. Two pathologists who are blind to this research reviewed all tissue sections respectively and marked the tumor tissue based on H and E staining. Each block was sectioned at 4 μm for immunohistochemical staining and 6 μm for DNA extraction. Patients’ name and other involved privacy were hidden during the whole study process. The ethics committee of the hospital approved our research design, including the use of all tissue blocks.

Immunohistochemical stain was performed according to the routine operation procedure in department of pathology. Mouse anti-human BRAF V600E Primary antibody (clone VE1, ready to use) was purchased from ZSGB-BIO Company, Beijing. Detail stain protocol is briefly as below: 4 μm thick paraffin sections from each block were firstly deparaffinized in xylene and dehydrated, then immersed in pH 9.0 boiling EDTA buffer in a pressure cooker for 10min to retrieve the antigen. After inactivation endogenous peroxidase activity with 3% H2O2, slides were incubated with primary antibody overnight at 4°C in a humidified chamber. Slides were subsequently incubated with HRP conjugated universal secondary antibody (K5007, purchased from Dako Company) for 15 min at room temperature, then DAB/AEC staining for 5-8 min and counterstaining with Hematoxylin. Between each incubation step, slides were washed with pH 7.2-7.4 0.1 mol/L PBST buffer at least 3 times. IHC analysis was performed based on the percent of positively stained cells and the staining intensity. Briefly, the percentage of positive staining was scored as negative (no staining), 1+ (0%-10% cell shows positive staining), 2+ (10%-30%) and 3+ (over 30%).

Pathologists firstly reviewed the H and E slides and circled the interested tumor area to guide macro-dissection of tumor tissues, 5-10 μm thick sections were scraped in a polypropylene micro-centrifuge tube, QIAamp DNA FFPE Tissue Kit (56404) was employed to isolate genomic DNA. BRAF V600E mutation analysis was performed by using AmoyDx™ BRAF V600E Mutation Detection kit (Amoy Diagnostics, Xiamen, China) according to the manufacturer's instructions. When IHC and ARMS results were discrepant, direct sequencing method was performed to verify the real status of BRAF V600E mutation in undetermined cases. Designed sequence of the forward primer was 5- GCTTGCTCTGATAGGAAAATGAG-3’ and the reverse primer was 5-GTAACTCAGCAGCATCTCAGG-3. PCR amplification conditions: 94°C for 10 min, followed by 40 cycles of 94°C for 45 s, 61°C for 45 s, and 72°C for 45 s, with a final extension of 7 min at 72°C. Purified PCR products were then run on an ABI3130 Genetic Analyzer and analysed using software supplied by the manufacturer.

A total of 90 melanoma tissues were tested for BRAF V600E mutation status by ARMS-PCR and IHC. Both methods were performed successfully in all cases and the results from two methods were listed in Table 1. VE1 immunohistochemical positive staining was homogenously located in the cytoplasm of tumor cells. Representative photos are shown in Figure 1. Of the 90 cases, 27 (30%) cases were found to be BRAF V600E mutation by ARMS-PCR, and of 27 cases, 16 cases were strongly positive (3+) staining, 11 cases were moderately positive (2+) staining. Among 63 BRAF wild type cases determined by ARMS-PCR, 2 cases showed IHC weak positive staining. Discordant cases were then re-tested by further direct sequencing method, one case was BARF wild type and the other case was BRAF G593V mutation (Figure 2). To validate the accuracy of VE1 mutant specific antibody, we then compared the results from two methods. ARMS-PCR was set as a gold standard method, the sensitivity and specificity of IHC was 100% and 96.8% respectively, PPV and NPV were 93.1%and 100%. Two methods in our investigation have good consistency with Kappa=0.948 (p<0.01).

Table 1. Comparison of BRAF V600E mutation by ARMS-PCR and VE1 staining by IHC. 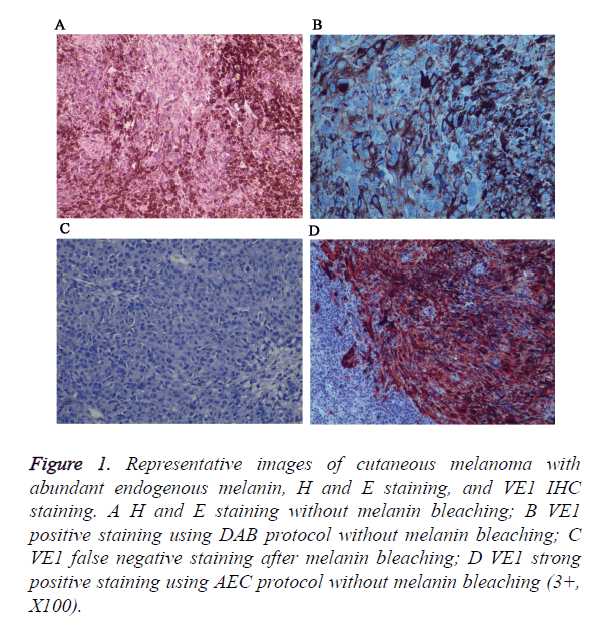 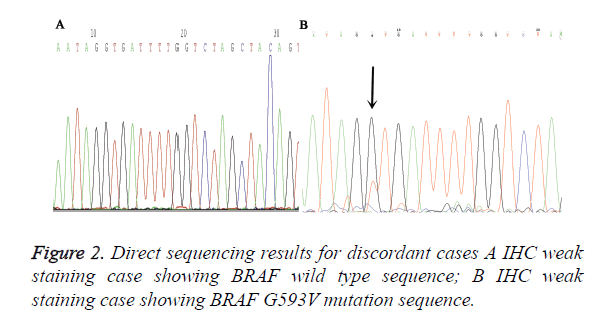 In addition, insoluble melanins will interfere normal interpretation of positive results, so we try to bleach melanins with oxidizing agents before immunostain. However, we found that strong oxidizing agents will destroy antigen and lead to false negative staining. For that, we use AEC chromogen instead of DAB to avoid interference of endogenous melanin.

BRAF (v-raf murine sarcoma viral oncogene homolog B1) is a RAS-regulated serine-threonine kinase and activator of the MAPK signaling cascade [23], which plays a vital role in regulating cellular responses to extracellular signals. In melanoma, it is reported that 40%-60% cases harbored BRAF mutation. Among those mutation cases, over 90% mutation type was a substitution of Valine (V) by glutamate (E) at condon600, referred to as BRAF V600E. Since the importance of BRAF V600E mutations in melanoma was reported in 2002 and most importantly, BRAF V600E-specific inhibitor Vemurafenib (PLX4032) was approved to treat BRAF V600E mutated metastasis melanoma [24], BRAF mutation then thought as a promising diagnostic and prognostic marker, increasing number of research focused on seeking effective, reliable, fast methods to detect BRAF mutation.

In this study, we detected BRAF V600E mutation in formalin-fixed paraffin-embedded cutaneous melanoma tissues by immunohistochemistry with mutation-specific antibody VE1 and compared IHC results with ARMS-PCR. Of 90 cases, ARMS-PCR displayed 27 (27/90) mutation cases, our IHC showed 100% sensitivity and 96.8% specificity. Besides, two methods have better consistency with Kappa=0.948), PPV and NPV were 93.1%and 100% respectively. Our results were basically consistent with previous studies [25,26]. Zhou et al. [27] reported the high concordance between IHC with VE1 and Sanger sequencing/ARMS was 93.2% in primary and metastatic papillary thyroid carcinoma, while in melanoma, Hui et al. [28] reported a 93.8% cases were coherent for VE1 staining. Compared with the reported data, our results showed a more high specificity and sensitivity. This may be partly due to the standard tissue dehydration program, which have a great effect on tissues antigen conservation. In addition, using stringent immunohistochemistry scoring criteria for IHC results interpretation also made an improvement in the sensitivity and specificity of IHC.

In our study, total 2 IHC staining cases were proved as false positive. 1 case showed weak staining in tumor cells. Meanwhile, non-specific background staining was also presented in the stroma of tumors. We speculate that it is such nonspecific background staining interfere cause the misinterpretation made by Pathologists. Currently, IHC has been a reliable routine diagnostic method for pathology in clinics. However, when used as a method for guiding targeted therapy, it still face some knotty problems, For example, the lack of standard interpretation methods and different antigen retrieval procedure of IHC, which are the main reason for the difference between each pathology laboratory. But these drawbacks can be overcome by setting up stringent scoring criteria for result interpretation and standard operation procedure during IHC detection, especially when fully automated IHC detection platform was introduced. The other false positive case was corroborated as BRAF G593V mutation by further direct sequencing method. Although VE1 is a reported specific antibody against on V600E, whether it having cross reaction with other BRAF mutation type, such as BRAF V600K, V600R, still remains unclear. Heinzerling et al. [29] and Ihle et al. [30] found one melanoma case that showed moderate intensity by IHC and cross-reactivity with the V600R mutation and the p.V600K mutation respectively. While in papillary thyroid carcinoma, Zhou et al. considered that cross-reactivity for BRAF mutation may occur.

In conclusion, IHC with VE1 antibody was a sensitive and reliable method for the detection of BRAF V600E mutation in cutaneous malignant melanoma. It can be used as a preliminary screening method. Normally, we still recommend ARMS PCR as the conventional method for BRAF V600E detection in clinical practice. However, under certain circumstances, such as low tumor cell content or poor processed samples, IHC can be a compromised method for BRAF V600E mutation analysis. Besides, IHC screening can effectively reduce the patient's economic burden, for those VE1 negative staining cases, it is no use further to perform expensive molecular detection.