A male aged 40 years was presented with double vision and blurring of vision persisting for past one week. He is known case of Hospital where he was admitted and treated for tuberculosis. He was detected retro-positive six months earlier was not on anti-retroviral therapy. His BCVA was 6/9(p) in both eyes. Left eyelid was with partial ptosis present and pupil was mid dilated, non-reacting to light. It was also noticed restriction of adduction, elevation and depression in left eye. Right eye EOM was full and normal. Vertical crossed diplopia was present. Fundus examination revealed tessellated background in both eyes. MRI (contrast) revealed inflammatory etiology to be considered as Toxoplasmosis. It was estimated that Neuro-Ophthalmic manifestations occur in 2%-8% of Human Immune Deficiency Virus (HIV) infected patients. Toxoplasmosis could be a cause of third nerve palsy in HIV infected patient.

The estimated annual number of new HIV infection in 2018 is 1.7 million world-wide. The Human Immune Deficiency Virus (HIV) remains public health problem in developing countries. Neuro-ophthalmic involvement has been widely described in HIV asymptomatic patients and in those with full blown AIDS. Ocular cranial nerve palsies occur in 4% of patients with AIDS [1].

Oculomotor nerve injuries are located at different points of its course and its anatomical relationship of various portions is responsible for its clinical features. In the developing countries people with HIV infection are more prone to infection like toxoplasmosis, tuberculosis, cytomegalovirus, varicella zoster and progressive multifocal leuco-encephalopathy. Hamed et al. reported ocular motility manifestations of focal brainstem dysfunction as clinical features in three patients with HIV infection [2].

We report an interesting case of third nerve palsy in HIV positive patient.

A male patient aged 40 years was presented with double vision and blurring of vision present throughout the day, in all directions, disappears by closing one eye, history of drooping of left upper eyelid for the past one week with no diurnal variation. Patient had admitted at the Hospital 5 years ago with history of pulmonary tuberculosis disease and undergone treatment for 6 months. Later, six months back he presented with fatigue and weakness and was detected retro-positive. The treatment was commenced but the patient discontinued.

On examination it was found that his visual acuity at 6/9, near vision N6 in both the eyes, moderate ptosis with poor levator palpebrae superioris, good bells phenomenon and reduced vertical palpebral fissure. Left eye adduction, elevation and depression were restricted (Figure 1). Pupil was round, 5mm non-reacting to light in the left eye. Rest of the anterior segment was normal on slit lamp examination. Fundus examination revealed tessellated background. Vertical crossed diplopia was found. Intraocular pressure was normal in both the eyes. 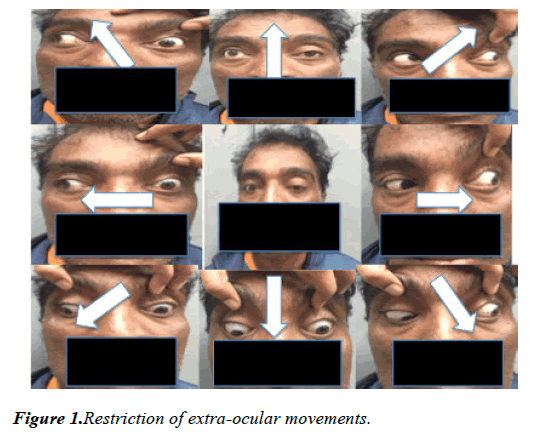 Patient was moderately built and oriented. No focal neurological deficit except for dropping of left upper eyelid on first day of the visit. Rest of the systemic examination was normal. Patient was advised for radiological investigations and for symptomatic treatment, patching of left eye was done. Serology for HIV antibodies was repeated.

Later, after a week patient presented with gradual progression of ptosis on left side, further diminution of vision, numbness in right palm and weakness in right upper and lower limb. Urgent MRI Brain with contrast and cluster of differentiation 4(CD4) cell count was advised. His serology of HIV antibodies was reactive by coombs test. Physician reference was given. 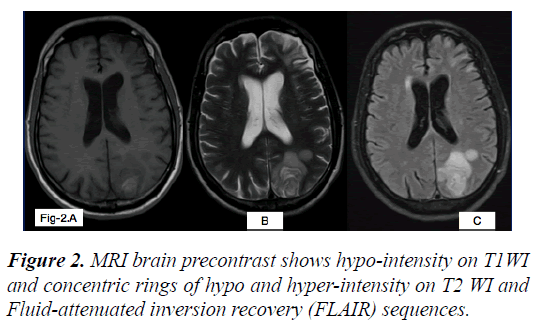 From the MRI report features suggested of HIV encephalopathy with toxoplasmosis infection (Figures 3-5). 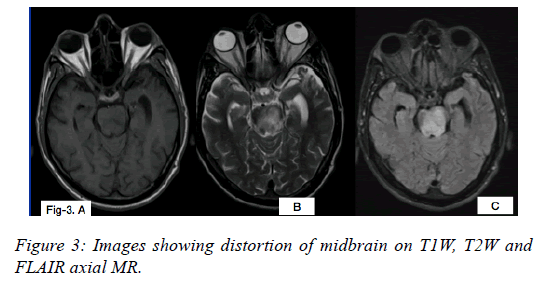 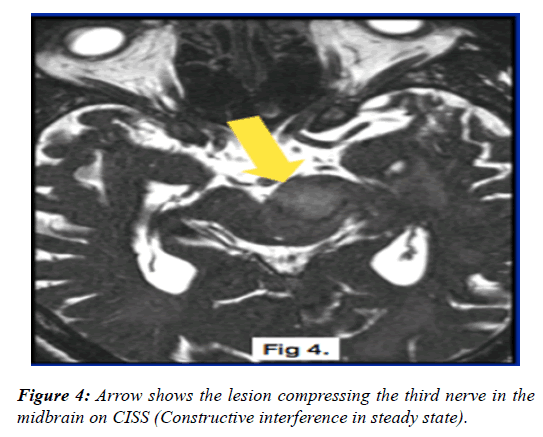 Figure 4: Arrow shows the lesion compressing the third nerve in the midbrain on CISS (Constructive interference in steady state). 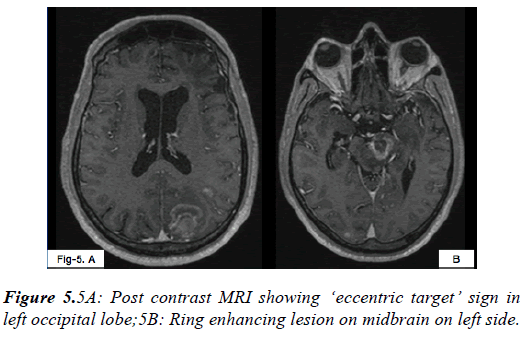 • On first day of the visit patient presented with double vision and drooping of left upper eyelid. He revealed his HIV status while performing clinical evaluation. MRI brain (contrast) was advised and left eye patching was done for diplopia.

• A week later patient with confirmed HIV antibodies positive status presented with gradual progression of ptosis on left side, further diminution of vision, numbness in right palm and weakness in right upper and lower limb. Urgent MRI brain (contrast) which was not done earlier, CD4 cell count and physician reference was advised.

• Physician advised for admission but due to financial constraints patient refused and was referred to higher center.

• After a week, patient was brought to emergency room unconscious, not responding to verbal or painful stimuli and was referred to higher center.

• After two days we lost the patient.

• Claude syndrome: Features of both benedikt and Nothnagel syndromes.

Subarachnoid portion is the most common site of an isolated oculomotor paresis. Aneurysm of posterior communicating artery, extra-dural and sub-duralhaemorrhage following head trauma are associated with third nerve palsy.

In the cavernous sinus the third nerve pierces the dura lateral to posterior clinoid process causing third, fourth, sixth and the first division of trigeminal nerve paralysis. In the anterior part of cavernous sinus, third nerve divides into superior and inferior branches. Lesion in the inferior division presents with limitation of adduction and depression.

Signs of third nerve palsy are:

• Ptosis due to paralysis of LPS muscle.

• Diplopia occurs due to deviation of affected eye resulting in image falling on extra-foveal point.

• Pupil dilation and defective accommodation due to parasympathetic palsy.

Neurologic sequel of the disease leads to much of the morbidity and mortality of AIDS. Toxoplasma gondii is one of the most prevalent opportunistic central nervous system infections in immune-compromised patient [7]. Clinical features of toxoplasma encephalitis include headache, fever, hemiparesis, ataxia, cranial nerve palsy, chorea, rigidity, seizures. In ocular toxoplasmosis retinal scars, vitritis, retinal detachment and optic neuritis may occur [8]. Mwanza et al. reported 11 HIV infected patient with toxoplasmosis, among whom 4 cases had 3rd cranial nerve palsy and 7 had 6th cranial nerve palsy [1]. Pillay S et al. reported 22 cases of cranial nerve deficiency in HIV-infected patients, and only one patient was definitively diagnosed with toxoplasmosis [9].

MRI has an important role in differentiation of cerebral lesions. A concentric target sign on T2WI weighted images with concentric hyper-intense and hypo-intense zones is more specific for cerebral toxoplasmosis.

The patient was positive for HIV anti-bodies which lead to impaired of immune function. The MRI report showed multiple ill-defined lesions in the left frontal and temporal lobes, bilateral parietal and occipital lobes, left basal ganglia, midbrain, thalamus and posterior portion of pons which are hypo-intense on T1 and concentric bands of hypo and hyperintensity on T2, FLAIR sequences. A lesion involving midbrain on the left side with involvement of left oculomotor nerve explains isolated third nerve palsy secondary to focal lesion. Multiple heterogenous signal intensity lesions showing heterogeneous post-contrast enhancement (“eccentric target” sign) with few areas of diffusion restriction in the mentioned areas are suggestive of HIV encephalopathy with toxoplasmosis infection. Henceforth the patient was referred to higher center for further evaluation and CD4 cell count. Patient being noncompliant had multiple visits to different hospitals because of the progression of disease severity. We lost the patient after a week.

HIV related stigma is key issue that impacts people living with HIV. Stigma and discrimination in the family, community as well as clinics are the significant barriers to HIV treatment which lead to negative consequences and poor adherence to medication in the patient.

It is strongly concluded that isolated third nerve palsy secondary to HIV encephalopathy due to focal lesion of cerebral toxoplasmosis is a rare clinical presentation and also based on an extensive search of reported literature on the related cases.